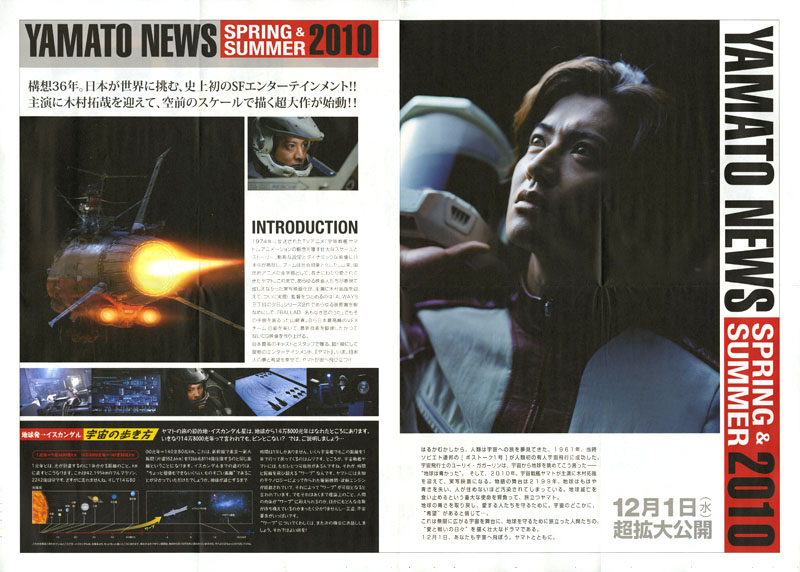 A teaser commercial had been released on January 1 for the live-action movie, creating worldwide excitement. That excitement was renewed when a one-shot Yamato News flyer was distributed to Japanese theatres. This large, double-sided foldout gave us our first look at the cast in costume and a few other intriguing photos as well. See it up close (and translated) in our first movie report here. 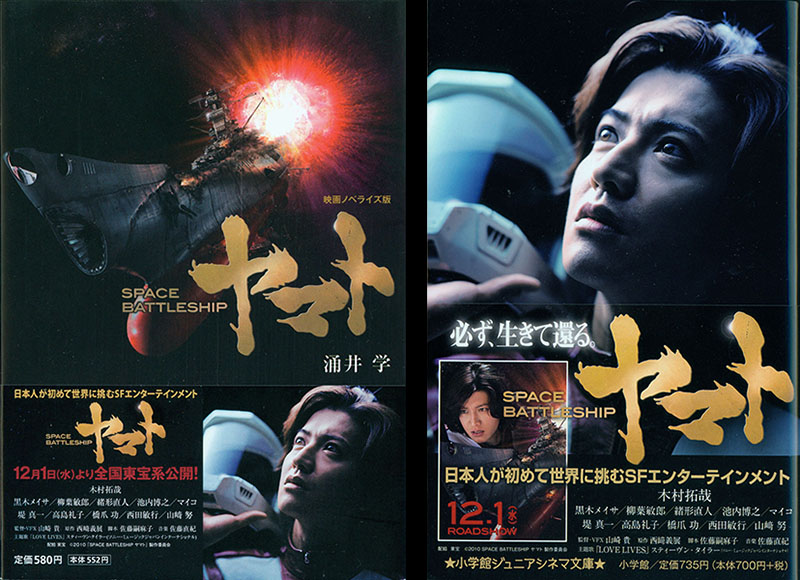 The publication date of this novel coincided with the October 6 anniversary of the first Yamato TV series, which is usually commemorated by one product release or another (consult our various History Timelines to see how it has been marked in the past). It fits into the Japanese “light novel” category, pocket-size with no interior images. Full translations of both the prologue and the epilogue are included in our synopsis of the movie, which can be found here.

Shogakukan later published a shorter novelization in their “Junior Cinema Library” line. It was released a week before the movie premiere with a few pages of color stills and completely different text from the first novel.

Published for special effects buffs, this became one of the few magazine tie-ins that didn’t put an actor on the cover. It contained a full-color 12-page article that examined the entire VFX process used by Director Takashi Yamazaki and Shirogumi [White Group] to make the film. As of this writing, it is still the only publication (other than the program book) to do so.

This full-color program book was sold in theaters, generously filled with stills and FX shots. See it from cover to cover here.

The first magazines with substantial live-action movie coverage started to appear in October 2010. With pop/film megastar Takuya Kimura as the “face” of the film, it was a natural choice for him to get one cover shoot after another – putting Yamato back in the spotlight of mainstream media for the first time since the 1980s.

Kimura interviews were the main feature of each magazine, often coupling him with Director Takashi Yamazaki, along with shorter features on the rest of the cast and retrospectives of the anime. Interestingly, one of these magazines was the bi-weekly KinemaJunpo [Cinema 10-Day Report] above left, which was known in previous decades as Kinejun. It had the distinction of being the first mainstream magazine to feature a Yamato cover story in 1978 (then again in 1980), and this was noted with pride in their new coverage. To its right is the December issue of Big Comic with a cartoon Kimura on the cover.

Most of the interviews have been translated and can be found at the following links: