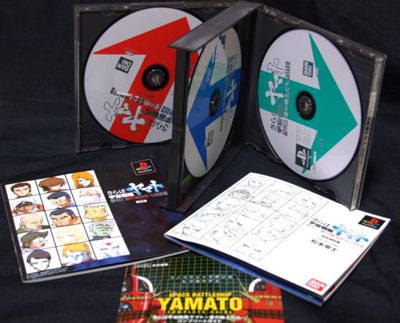 Like the original movie it is based on, the Farewell to Yamato Playstation game exploded the Yamato universe to new dimensions. For one thing, it was physically bigger—spread across three discs—and essentially offered two games for the price of one since it was possible to branch either into the Farewell continuity or the comparably happier ending of TV Series 2.

There were no less than 20 different stages with 34 playable missions. All the same creators returned to continue what they’d started (probably without a break, given that the games were released just 15 months apart) and the mechanics of the previous game provided a solid foundation for the new one. The expanded disc space allowed for larger fields of play, such as the surface of Telezart and the interiors of various spaceships.

Players are challenged right from the beginning with a significantly underpowered Yamato attempting to break through a blockade of EDF defense satellites en route to a standoff with the Andromeda. The battle to free the Space Marines from Planet 11 provides opportunities for skill and power boosts, and the road to Telezart is far more circuitous than in the TV series. Since the later parts of the game become progressively complex, this is probably meant to help players build up both experience and points.

The hybrid nature of the story is reflected in the new design for Teresa, which places her halfway between the film and TV series. The game gives more depth to a secondary character from the anime: Shinpai, known to American viewers as Royster. (His Japanese name is a pun, since it can be translated as “new guy.”) His appearance is far more stylized in the Matsumoto tradition and he fills in for Yuki at the radar while she performs as a nurse. He becomes a full bridge character and his clumsiness provides comedy relief, but he has several opportunities to save the ship.

The Battle of Saturn is a strategy gamer’s dream with multiple events on a huge scale, and when Yamato engages in its dramatic showdown with Dessler the unique branching potential of the game really shines with alternate cutscenes that go in opposite directions.

See slideshows of animation stills from the game here:

Second half with branching scenes 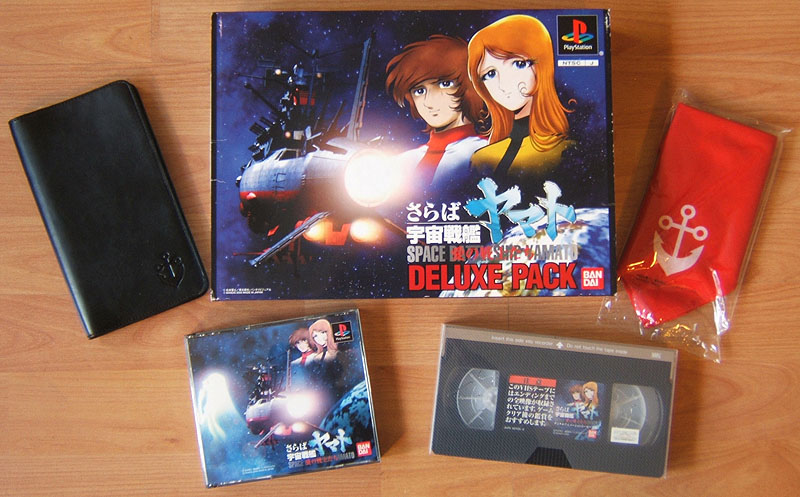 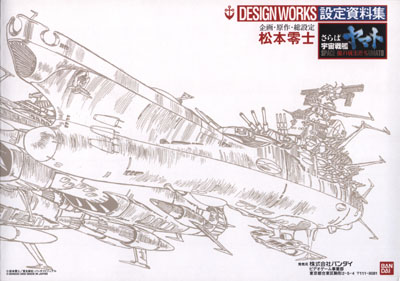 Something else that gave the second game extra prestige was a ‘Deluxe Pack’ box set for the true afficianado. In addition to the game itself, the set included a handkerchief with anchor emblem, a 40-minute VHS tape containing all the new animated cutscenes, a leather-bound captain’s log, and a large-format art book, shown at right.

The exclusive Design Works Setting Document Collection was a 64-page treasury of character and mecha art by the game’s two superstar designers. Keisuke Masunaga had previously created revolutionary character designs for Leiji Matsumoto’s Queen Emeraldas OAV (1998), brought the same energetic look to the Yamato games, and continued with many other Matsumoto projects afterward.

Kazutaka Miyatake’s credentials went all the way back to the beginning, designing mecha for the first TV series in 1974 and taking an even larger role on Farewell to Yamato in 1978. (The Andromeda was mainly his concept, for one example.) He went on to revolutionize SF mecha design on Macross, particularly the 1984 movie version, then finally returned to the world of Yamato to redesign it for Playstation. His re-imagined Yamato later became the basis of Bandai’s giant 1/350 model kit in 2007.

Interviews with both Masunaga and Miyatake are linked at bottom of this page.

Other than the Design Works book, the captain’s log was the best prize in the Deluxe Pack; a genuine leather 4.25″ x 7.5″ pocketbook that just dripped with authenticity, an artifact seemingly from the desk of Okita himself. The front half was a basic notepad and calendar (dated April 2201 to March 2202), but the back gave you stuff you needed to know as a member of the Star Force, from the order of planets in the solar system to the schedule for crew rotation (shown above right)

As with the first game, Farewell‘s animated cutscenes (totaling about 40 minutes of full animation) were offered in two alternate forms; the VHS tape in the Deluxe Pack and a limited-edition DVD that followed the Playstation 2 games a few years later. Fortunately, some of it can also be viewed on Youtube:

Attack on the Comet Empire

Read a FAQ and walkthrough by Nick Flor here. Visit our links page for more!

The Farewell game received far less publishing than the its predecessor (based on Series 1), but the quality certainly did not suffer.

Of all the books devoted to the Playstation games, this is the least flashy and most utilitarian. A few pages are spared for artwork, but most are filled with hardcore, nuts-and-bolts strategy for playing the game itself. It’s probably indispensable if you’re trying to work your way through the caverns of Telezart or the decks of Desslok’s flagship, but if you’re just looking for some pretty drawings, there are better places to go.

Of the two strategy guides devoted to the second game, this is the better one for non-gamers since it devotes a larger number of pages to the character designs, and even a few to the original battleship Yamato.

A word about Game Translation (contributed by Andrea Controzzi)

At the moment, the Yamato Playstation games are available only in Japanese, a huge problem for those without language skills, owing to the text-heavy nature of the game design. Attempting to play the game despite this obstacle means a lot of “Game Overs” and frustrating brute-force attempts to find a solution by trial and error rather than strategy and cunning, wasting a considerable amount of the fun and challenge involved. Also, many bonuses and important references are likely to be missed by non-Japanese speakers.

It is interesting to note that the games are born ready for translation, despite being produced only for Japan. Almost all the dialogue appears on-screen, which makes it very easy to change. There isn’t even a need to change the font, since Roman characters are also displayed; only text data needs to be rewritten. Also interesting to note is that on-screen text in the cutscenes is already in English. This strongly indicates that an English translation was planned for, but sadly so far this remains only a hypothesis. 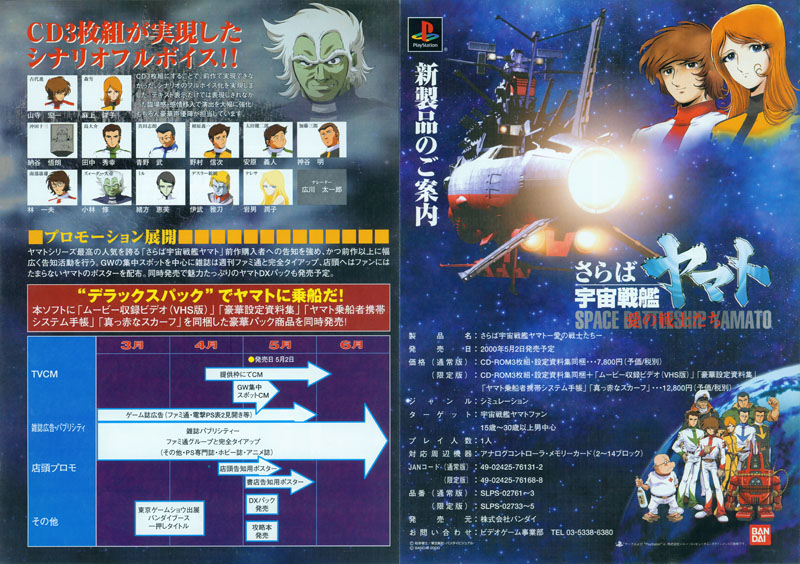 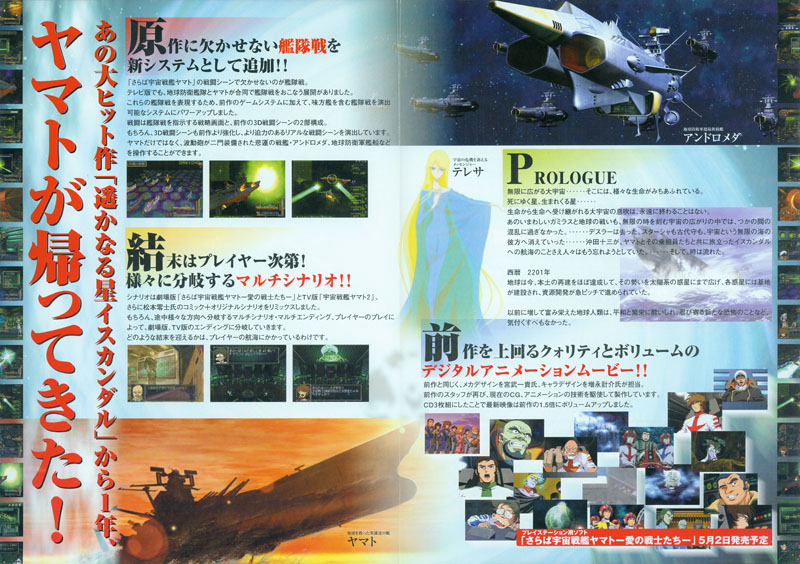 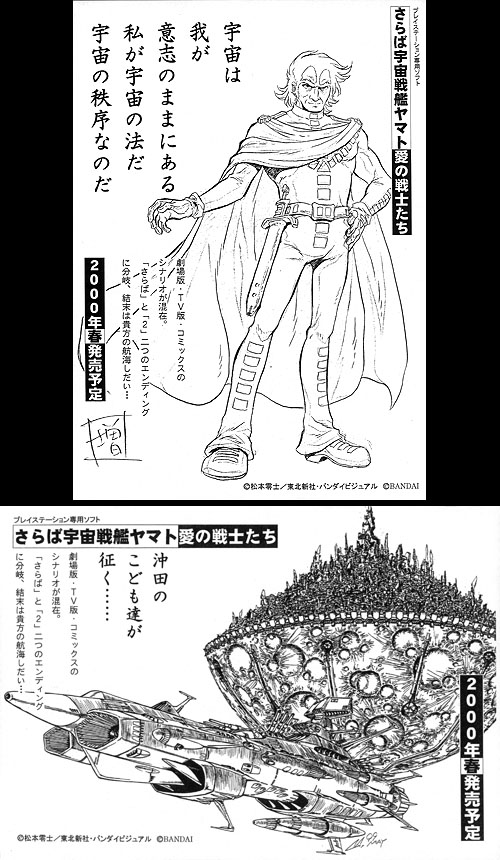