Approaching the charm of the Yamato Girls Collection!! 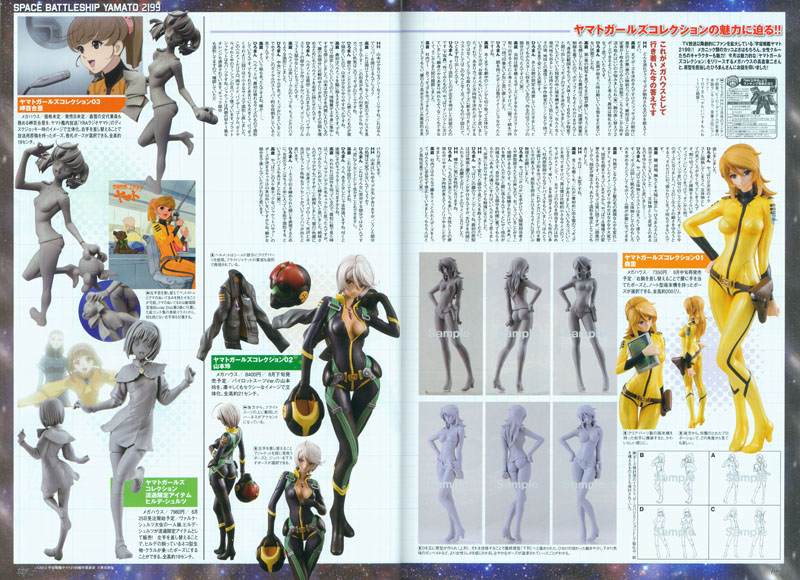 Space Battleship Yamato 2199‘s fans have expanded dramatically since it came to TV! There is the coolness of the mecha and of course the attractive female characters of the crew! This month we talk with Koji Takakura of Megahouse, which releases the attractive Yamato Girls Collection, and Mr. Hiroman who was responsible for the prototype!

This is the answer Megahouse has now arrived at

Interviewer: Please talk about the flow of producing a figure.

Takakura: Although the pose is decided first, we started working on figures before the screening of Chapter 1. Under those conditions, we only had one anime design sheet at first, and I was worried about what we should take into consideration from that. (Laughs) I thought we should be able to replace the arm for two poses, maybe with her saluting. 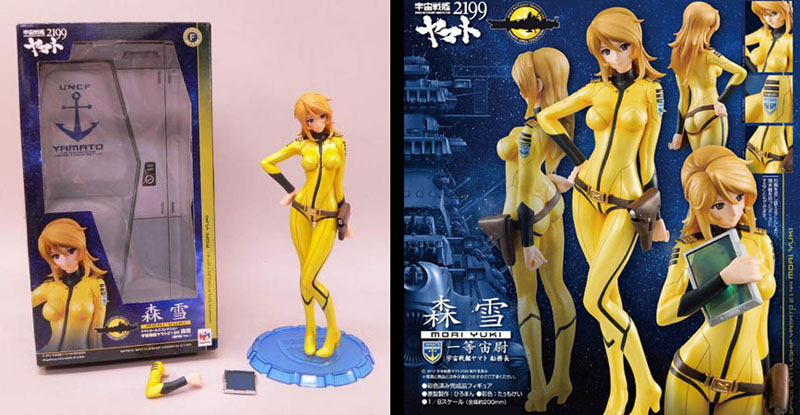 Hiroman: When the project began, the situation was that we had not seen Yuki in motion yet.

Takakura: Yuki was still hard to see in the trailer for Chapter 1, and I was feeling a little anxious. Besides, in the beginning she was wearing the tatami-mat-like uniform of the national space forces, and I didn’t understand her bodyline well. From size comparison illustration, was her height roughly 165 or 166cm? I calculated it and decided on the size of the figure.

We had received some model sheets of a tablet, and we talked about giving her one to reflect modernity. After that, we were relieved to see she had such scenes in the strategy and communications room on Earth.

Hiroman: Model sheets of the gun were also provided. But since it’s fitted into a holster, we only made part of the grip. (Laughs)

Takakura: At first I thought we could take it out of the holster if we made a pose to include the gun, but we said, “Yuki with a gun?” “I don’t get that impression.” So we reconsidered.

Hiroman: A pose with a gun was not the image of Yuki.

Takakura: If we said it was from a scene cut from the story and realized in 3 dimensions, I thought the audience would feel the same as us. Then, rather than give her an exactly directional pose, we steered more toward a looser one. I came up with illustrations of her standing poses in the meantime. 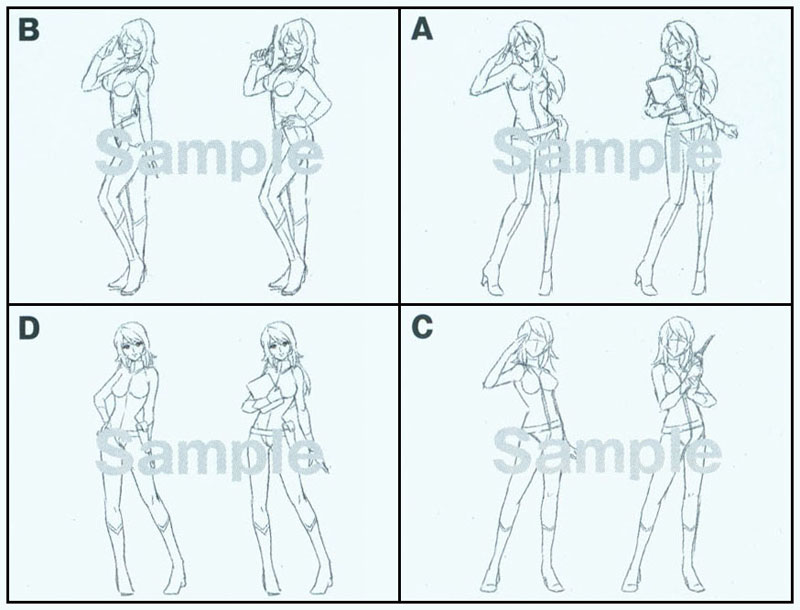 Hiroman: When I modeled her, I lengthened the left leg (photograph below). Although I made it, it was lacking in impact. Because it was on the small side, it didn’t separate very much, so I did trial and error again from there.

Takakura: I collected advice from members of the company who have made 1/8 scale figures and did a thorough review starting with the condition of the waist.

Hiroman: If we just stuck to a 2-dimensional illustration, the attraction of it being a solid object would be lost. We keep a good balance with the bodyline to be practical, and then exaggerate it a little and I put all my effort into sharpening the image from there. The present pose came from that. We were trying to preserve the slender silhouette of the base, so I couldn’t do anything to draw it away from that.

Takakura: The waist, shoulders and chest were significantly modified, and it was a real struggle for Hiroman. I think it must be made to have the appearance of a solid object.

Hiroman: After all, an illustration is completely different from a solid object. Because you can turn the figure and look at it, a feeling of volume becomes absolutely necessary if you’re looking for the fun in a 3-dimensional object.

Takakura: When the drawing is digested, the expression of the hair also changes, and the adjustment of that image is very difficult. The designs are not solidified, either, so there are last-minute changes, too. This is a funny story now, but after we had made some progress the design was modified and we had to revise the model in a hurry. 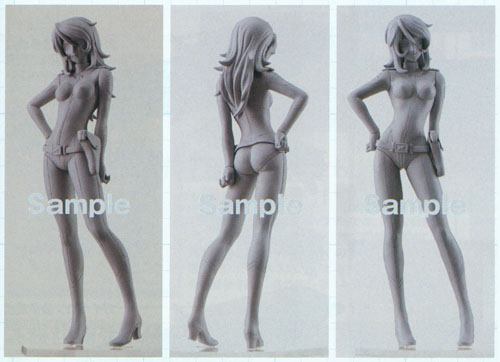 Takakura: For better or worse, there was pressure for this to become the first figure of Yuki to come out. While there’s all sorts of cool ways to say it, actually the main figure is at a comparatively small size, and it was the first time I was in charge of one at 1/8 scale. Fortunately, there are a lot of members of the company who have worked in 1/8, and I got advice from them on the prototype. So really, after a lot of fumbling around in its production, this is the answer Megahouse has now arrived at. I asked for the impossible from Mr. Hiroman who was responsible for the prototype.

Hiroman: Because it was the voice of sculptors and developers who have worked on “POP” after all, I can well understand what they’re saying. They just have to point out, “Ah, it should be this way,” and it goes right to my gut. Anyway, since they gave precise instructions on the parts I was worried about, I ended up thinking, “Ah, yes, that‚Äôs the way to do it.” It was easy to understand and I learned a lot.

Interviewer: Tell me about a place where it changed significantly.

Hiroman: That would be the line of the hips. In the first prototype (above right) the hip line was almost parallel to the ground, but the right hip went up by putting the left knee inward, and it became a diagonal line.

Interviewer: Then it certainly becomes feminine at once.

Hiroman: There are a lot of highlights here, with an easy feminine expression on her face, but with a directionality that shows she means business.

Takakura: Everyone in the company wanted to her to have a pose with her butt sticking out, and I really had to correct it and not compromise on that. Of course, most of the employees are male. (Laughs) 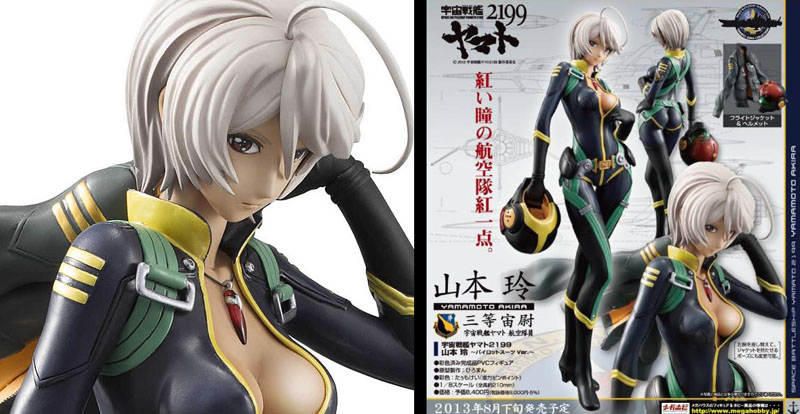 Interviewer: Yamamoto’s image is quite sexy. Why the open zipper?

Takakura: It’s open to show the keepsake necklace! The keepsake makes her Yamamoto. But cool sex appeal is the theme of this figure.

Hiroman: After I grasped the feeling of volume and the line of the waist with Yuki, Yamamoto was quite easy to do.

Takakura: The helmet was made to be held at her side at first. But it was much harder to secure, and it felt like there was too much information concentrated on her upper body. Since Yamamoto’s right knee is brought in toward the inside, there’s comparatively a lot of space by her right thigh, so I put the helmet in her right hand in order to fill the space.

Hiroman: There was a mistake with the helmet at first, I only made the smokey part of the visor. I made it without the full face portion in green.

Takakura: For the helmet, we gave it a red goggle on top, with a slight feather-like design molded into it.

Hiroman: There’s a dial in the center, so I imagine the feather is there to act as the dial’s stopper.

Takakura: There was a picture of it. Surely…

Hiroman: At first I molded the helmet at a size that could be worn, but that made it too big, so in the end it was better to make it about two sizes smaller. Between the mouth, both sides, the goggle, the dial, and the cushion, the helmet is made up of eight parts. The flight jacket is six parts. The inside of the jacket is painted in MA-1 orange, too. You can confirm that the zipper portion is also modeled.

Interviewer: Yamamoto has the so-called “idiot hair.” Was it hard to process that?

Hiroman: That part wasn’t very difficult. Conversely, you can also take advantage of the accent.

Takakura: This is the main point this time around.

Hiroman: Yeah, it’s entirely different if it isn’t there. As soon as you add it, it becomes the character.

Takakura: Since we know the original, when I first saw the picture although I thought, “idiot hair in Yamato?” it wouldn’t be close if we went without it. I became convinced that this was “characteristic” of Nobuteru Yuuki’s designs. In comparison with Yuki’s monochrome design, her boots, full body suit, harness, and gloves have a variety of gloss, semi-gloss, and matte accents.

Hiroman: In order to express the feeling of a tightened harness, I was advised that the line of the buttocks would be molded by the form of going slightly inside. (Laughs)

Takakura: That’s the perv-check, after all. Aside from Yamamoto, there’s no other character who’d be given this jacket bursting pose. I think you will like the fine details. 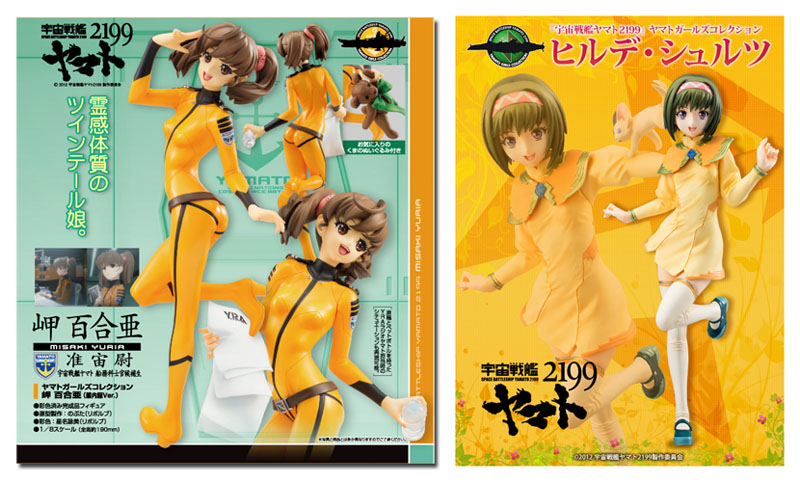