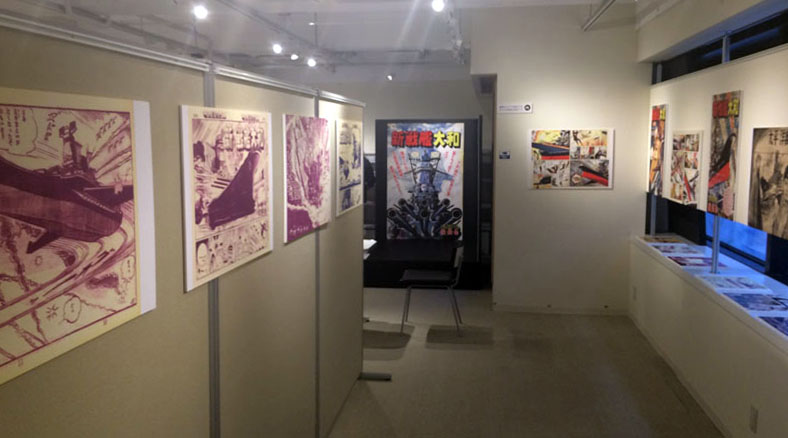 Thanks to invaluable assistance from friend-of-the-website Sword Takeda, we have a lot more to look at when it comes to New Battleship Yamato. He attended the June 2016 art exhibition in Ginza, Tokyo, and took plenty of photos to share with the world. There was also a 100-page full color exhibition book that provides a tantalizing glimpse of what we have to look forward to if and when the reprint appears.

Click here to see a photo gallery of the exhibition

Click here to see the new tribute art created for the revival.

Many of us strongly remember the image of Yamato flying in space, but more than ten years before that broadcast, a Yamato that flew through the sky was born, in 1961. Its name was New Battleship Yamato. It was an original story by Ikki Kajiwara, famous for Star of the Giants and more, published as a picture story (illustrated novella) in Hinomaru magazine from Shueisha, with art by Ikuya Yoshida. A manga version appeared later in Shonen Gaho magazine, drawn by Tetsuya Dan.

In the story, the evil villain Dr. Killer rebuilds Yamato for world conquest, but it is taken by a hero father-and-son team to fight the battle of good and evil. Yamato can dive underwater. It is packed with bold ideas, such as the scattering of poison gas on board, Zero fighters remodeled by the Doctor, and more.

More than fifty years after this legendary work, a reprint of both the picture story and the manga will be collected in book form for the first time. In addition, the participation of illustrator Shin Ueda cannot be overlooked!

Illustrator Mr. Ueda is known for his classic images with a Showa-era taste. He contributed Showa-style illustrations of Japan Self-Defense Forces to this magazine’s June issue.

The genius of Ikki Kajiwara is still amazing. The story in which Yamato is given wings to fly and can also dive under the sea was born in 1961. There are plans to commemorate his 80th birth year, and this reprint book is one of them. Shin Ueda also participates in the revival of this unique Showa artifact with his own illustration as well as a model! 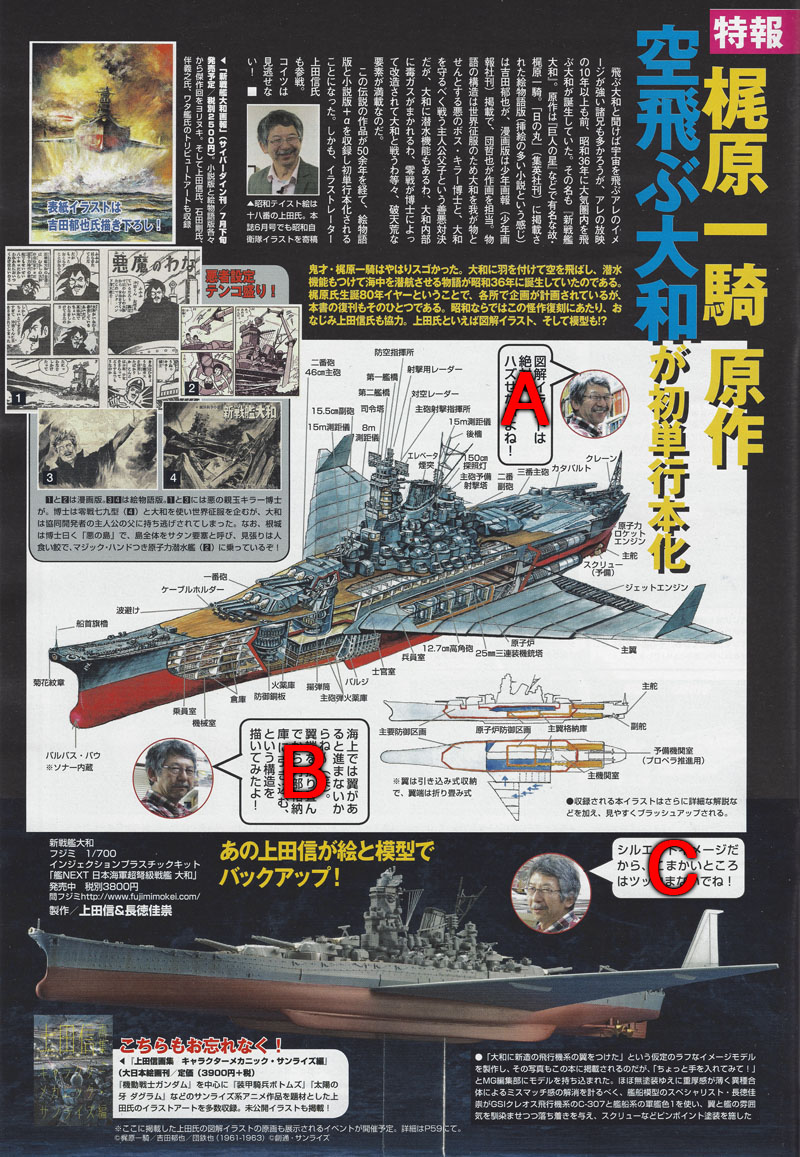 A: Cut-away illustration is a must!

B: With huge wings, a ship cannot swim in the sea (laughs). I worked out the concept of the wingtips folding for storage in an inboard hanger.

C: This is a so-called image model, so details may not match. Don’t be too picky.

Backing up Ueda’s picture with a model!

“Newly-built airplane-style wings attached to Yamato.” Shin Ueda produced a rough image model on the supposition that photos of it could be included in the book. He brought the model to the Model Graphix editorial staff and said, “I’ll put this in your hands!”

It was still unpainted, it looked small and light, and the attached wings were a mismatch to the hull. To solve these problems, warship model expert Yoshitaka Nagatsuka used airplane color C-307 and Battleship color 1, both from GSI Creos. He blended the wings with the main hull, toned it down and weathered it. He added a final touch of pinpoint paint on details such as screws.

Sidebar: Things About the Wings

By Sword Takeda, published June 22 at his blog, Addicto.

New Battleship Yamato has large delta wings that can fly through the air with ease.

Space Battleship Yamato producer Yoshinobu Nishizaki was particular about its visual image, saying, “New Yamato is transferred into space.” He insisted on Yamato having unnecessary equipment in the form of wings to fly in space. 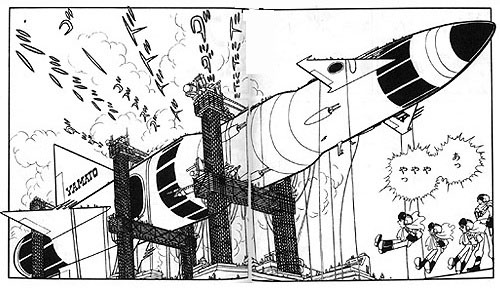 Although he had used small delta wings in the past, he did not want to break the silhouette of the Battleship Yamato in the anime design. (Early concept sketch by Matsumoto below) 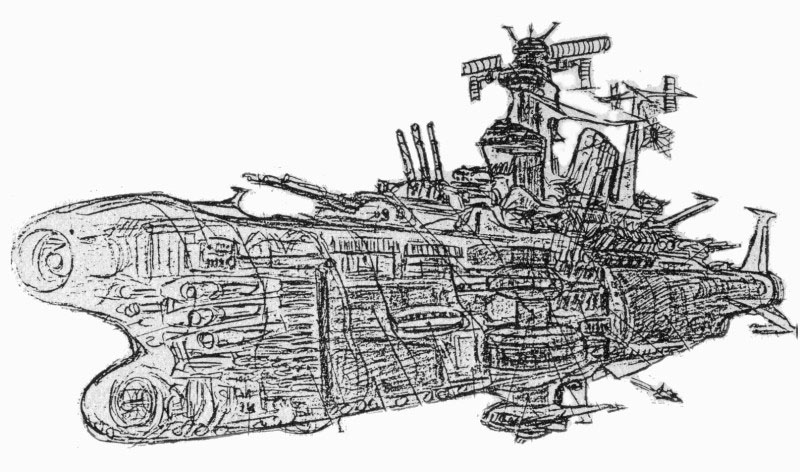 In addition he was also skeptical about the design sense of having wings on New Yamato. He thoroughly rejected the “Yamato wings” design concept. 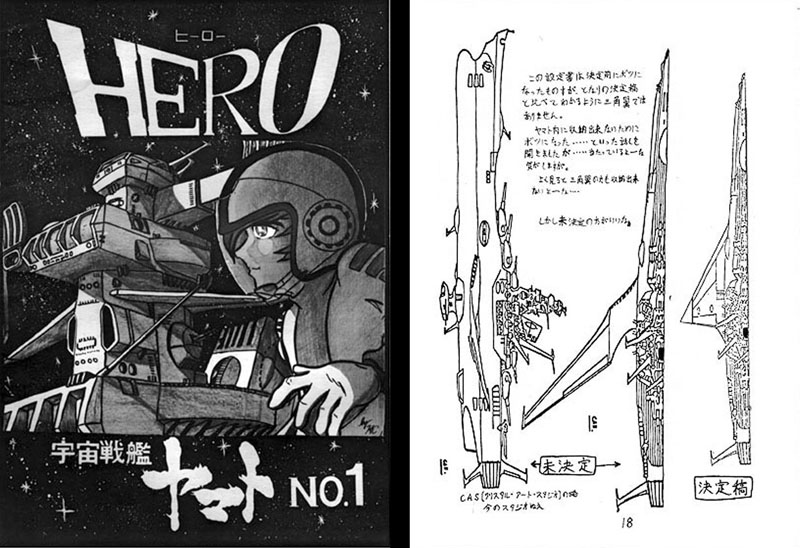 Lost material from the early design stage appeared in a doujinshi. (See it from cover to cover here.)

Studio Nue (previously known as CAS = Crystal Art Studio) undertook the work out of necessity, but Nishizaki did not like this bat-wing design and seemed to refer back to the delta-type wings of New Battleship Yamato. 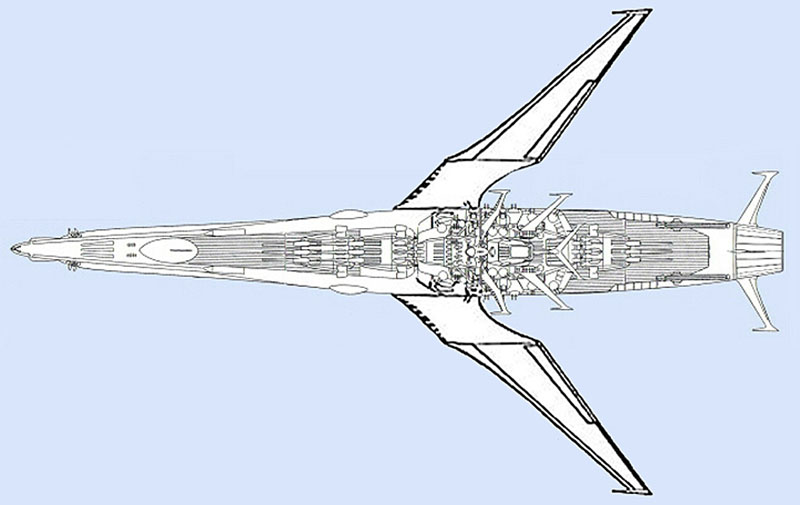 The rejected bat-wings. Many of the illustrations in this article are from X-Vanish, the website of Mr. Blusterg.
(See it here: Home page | Yamato section)

“How would you store such big wings?” The issue of the storage problem was not likely to have been a decisive factor. Due to their size, even the delta wings can’t be adequately stored away.

(Some storing mechanisms were developed for toys in the later years that impeded the internal structure of the ship.)

No thought was given to a storage problem on New Battleship Yamato, which had smooth wings.

A new model of New Battleship Yamato, displayed in the exhibition space at Ginza.

On the occasion of this reissue, Shin Ueda proposed a multi-level slide storage deployment method. Because the trailing edge is lined with jet propulsion mechanisms, the wings are very thick.

A remake of Space Battleship Yamato was done in the modern age when deformable mecha is in its prime, and though 2199 was probably a one-time opportunity to modify the concept, it blindly followed precedent. 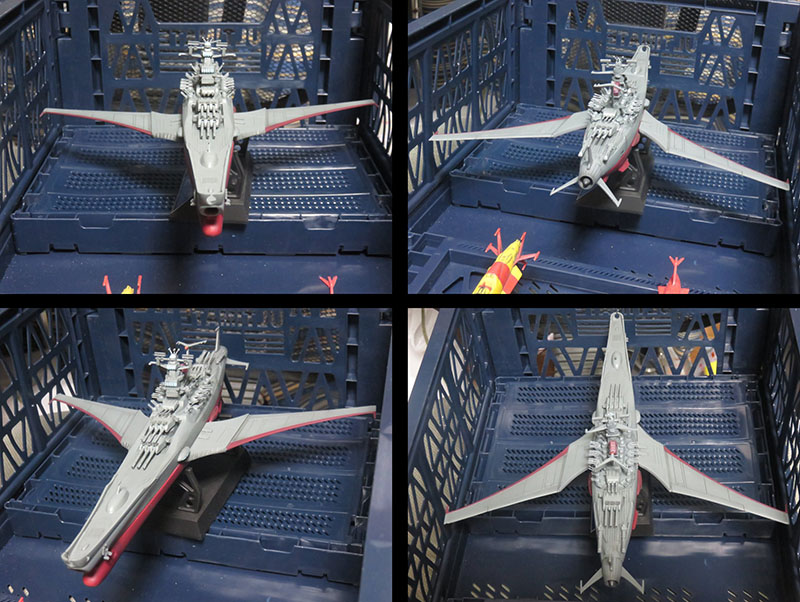 I stopped dwelling on the delta wings last year when I learned of the bat-shaped wings.

A Yamato that seems able to fly horizontally in atmosphere has now been devised. If its elongated plate-shaped parts could effectively use the armor plates from the side of the ship, so much the better.

This is the former image. To accommodate a delta wing, the widest part of the cylinder in the rear half of the ship would be used. 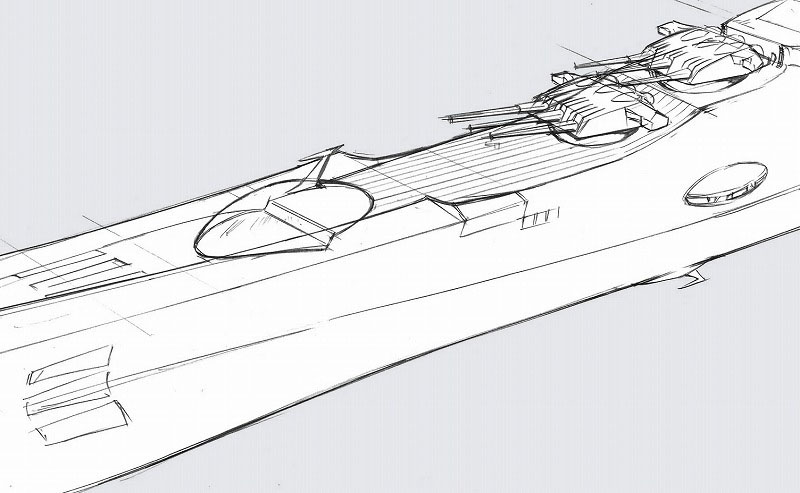 If it used a level, passenger-plane-style wing, the front half of the ship would be preferable.

Part of the hull plating would be used (the shaded area). If the armor plating of the ship’s broadside could swing outward… 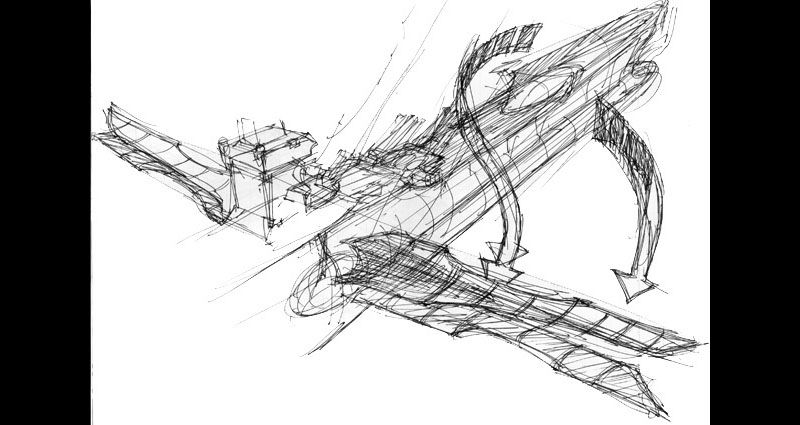 …its upper surface would be a concave, so lift would not occur. So it could be inverted and the inside of the armor plate, which is usually hidden, could become the upper surface.

In the end, you wouldn’t expect to get any lift from this wing. This would be true if it was meant to be a stable wing, but in this case it’s an airfoil shape.

This is the ideal suggestion: to swing and rotate it in the area next to the side observation windows.

A groove would be added as a guide rail and that’s how it could move. How about that? 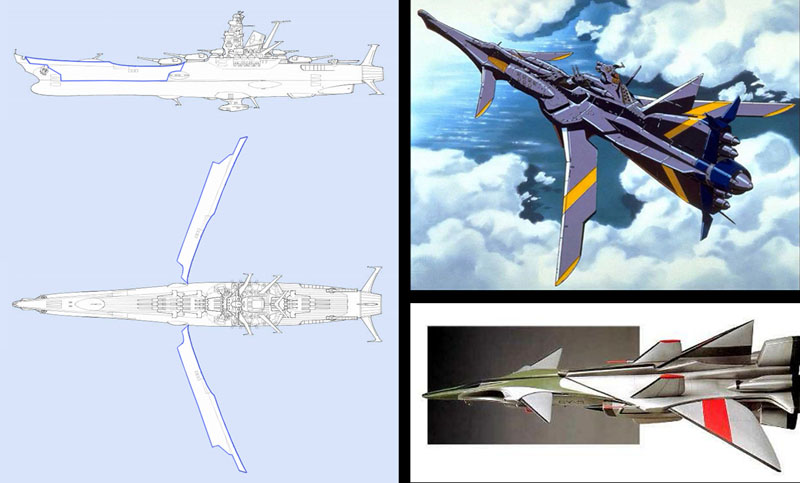 This figure indicates only the movement of the parts. On the top view, the detail on the wing surfaces is actually underneath. This is reminiscent of the N-Nautilus from Nadia and the Secret of Blue Water (above right/top).

By rejecting the Yamato design and reviving the bat-wing plan, it came to resemble the Moonlight SY-3 from Destroy All Monsters (above right/bottom). I like it quite a bit, myself.

The more I think about it, it sounds like a great idea. Someone please modelize it! While writing this article, the idea of ailerons also came up, and even if it’s just a delusion, please let me know how it could be made three-dimensional. (Or not…)