Since Chapter 7 premiered a week before the end of August, it played through the first week of September and had a big impact on the month that followed. If anything, attention for the finale was higher than for the beginning, especially since that finale would repeat on TV at the end of the month. With these two points as tent posts, September gave Yamato fans plenty to chew on. 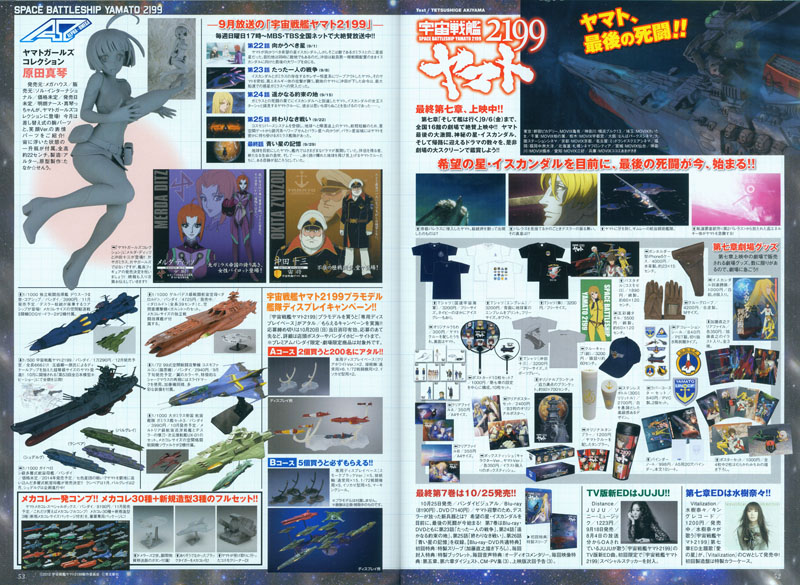 Hyper Hobby didn’t have an interview to offer this time, but they did a pretty good job of jamming the incredible amount of August news into a two-page spread. One of those news items (not covered in Report 23) was Bandai’s announcement that the original 30-piece Mecha Collection model kit series would be re-released in a box set this November.

That in itself wasn’t news, since a box set of these first appeared back in 2004. The truly newsworthy part was the addition of three new models to the lineup: the Domelus II, a Black Tiger, and the Cosmo DNA. With classic-saga models now appearing alongside their 2199 descendants, it seems like nothing is off the table any more.

Three of the Yamato Girls participated in this week’s Nico Nico simulcast, and Sayako Toujo (cosplaying as Yuria Misaki) went out of her way to maintain her role as the prankster of the group, channeling the original Analyzer (probably without realizing it).

We also got a rare look at the three young ladies out of uniform in a behind-the-scenes video in which Shiki Aoki (Akira Yamamoto) put the finishing touches on her Cosmo Zero model kit.

When the show resumed, Aoki presented the finished version and Toujo wasted no time getting to the sight gag. 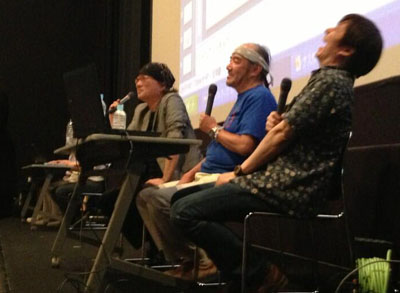 This Yamatalk event took series director Yutaka Izubuchi outside the usual Tokyo circuit to nearby Yokohama for an evening of conversation with the great Kazutaka Miyatake. As a founding member of Studio Nue, he was one of the original mecha designers for the first Yamato series in 1974 and Farewell to Yamato in 1979 (almost single-handedly creating the Comet Empire fleet).

Though he is no stranger to interviews, Miyatake rarely makes personal appearances so this opportunity to hear him tell previously-untold stories in person was relished by hardcore fans, including friend-of-the-website Gwyn Campbell. Read his report here.

This astronomy periodical from Ascii Media Works was easy to miss in the flurry of other activities, but it contained an article by Professor Toshihiro Handa of the Kagoshima University Department of Science, who serves as Yamato 2199‘s astrophysics advisor. In it, he comments on the anime’s representation of real stellar objects just as he did in his earlier live lectures.

A copy of this magazine could not be obtained in time for inclusion here, but it will be covered in a future update. 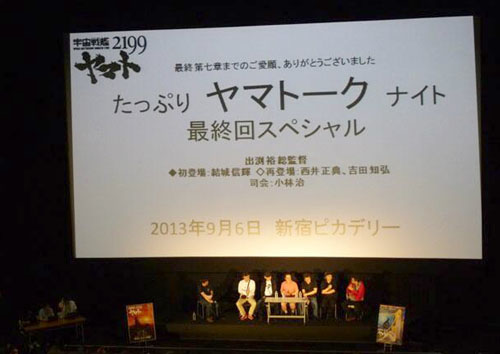 Attendees were given a special postcard, unique to this event, with thank-you’s on the back from the Yamatalk participants. Yutaka Izubuchi took up the left side with his message. At the top it says “A journey has no end.” 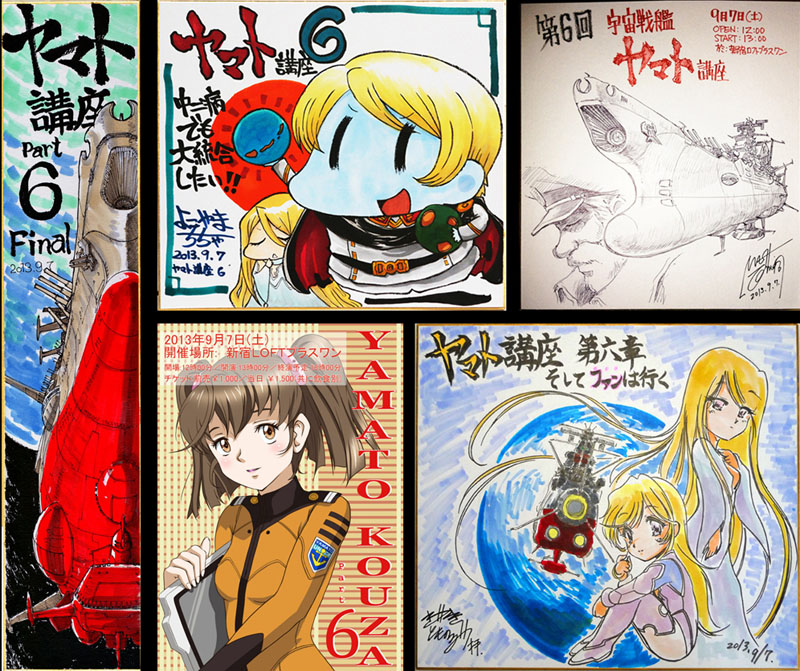 This was another Yamato event that came to a successful conclusion in September. From the beginning, it was a kind of social experiment meant to explore the views of fans at opposite ends of the spectrum. Two “students” who had never seen Yamato before 2199 were the subjects, joined by writers and commentators from previous generations of fandom reaching back to the original. Over this series of lectures, all their views were compared and contrasted in a thoughtful examination of Yamato‘s cultural impact.

Read a detailed description of what went on at Lecture 6 here.

The Nico Nico simulcast for this episode sailed in for what would turn out to be the last time with only the two primary hosts, Sayaka Toujo (Yuria Misaki) and Shiki Aoki (Akira Yamamoto). The first portion featured their usual light banter, but then the ending of the episode left Toujo blubbering and shouting “COOL! COOL!” at the reunion of Kodai and Yuki on the doorstep of Iscandar.

Two highlights from the second half included a first look at Yamato Crew’s custom color variant of the forthcoming Yamamoto figure from Megahouse (held by a staff member), and the customary re-enactment of a favorite scene. Of course, Toujo had to relive the scene that made her all sappy. 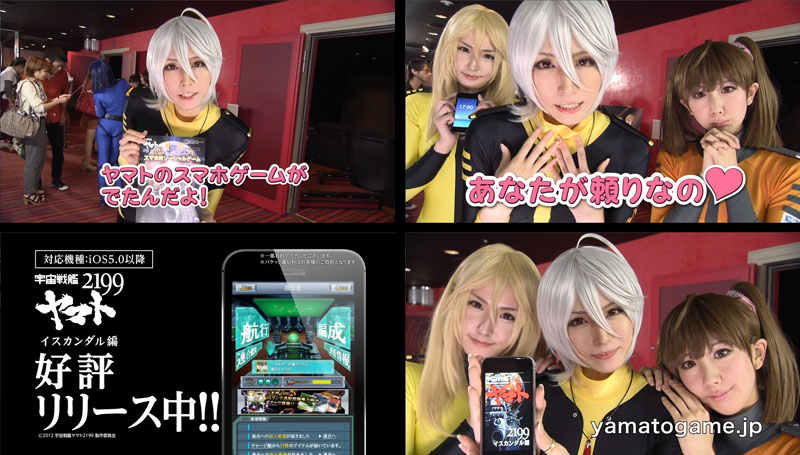 The next appearance of the Yamato Girls took place less than a week later when their new TV commercial made its debut, promoting the Yamato 2199 Iscandar Edition Smart Phone game. Also described as a “social game,” it takes its cue from card games and allows players to build virtual decks of characters and mecha to deploy against Garmillas forces on the way to Iscandar. Pre-registering for the game unlocked rare cards.

The iPhone app was released on September 15 with the Android version promised for October. It became available for free download worldwide on iTunes September 27, but instructions and screen graphics were not translated.

See the Yamato Girls’ commercials here: Version A | Version B 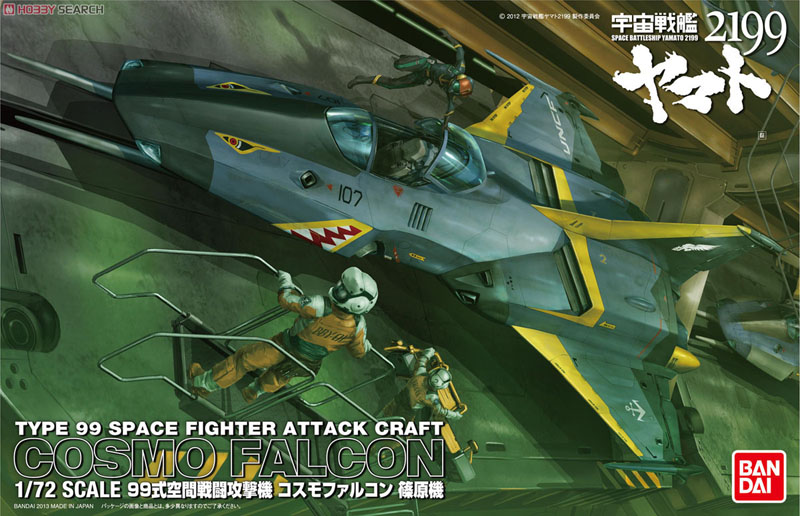 This second version of Bandai’s Falcon was identical to Kato’s fighter in every way but its color, and of course the Shinohara figurine. Like its predecessor, it can be displayed on or off its stand and with option parts. 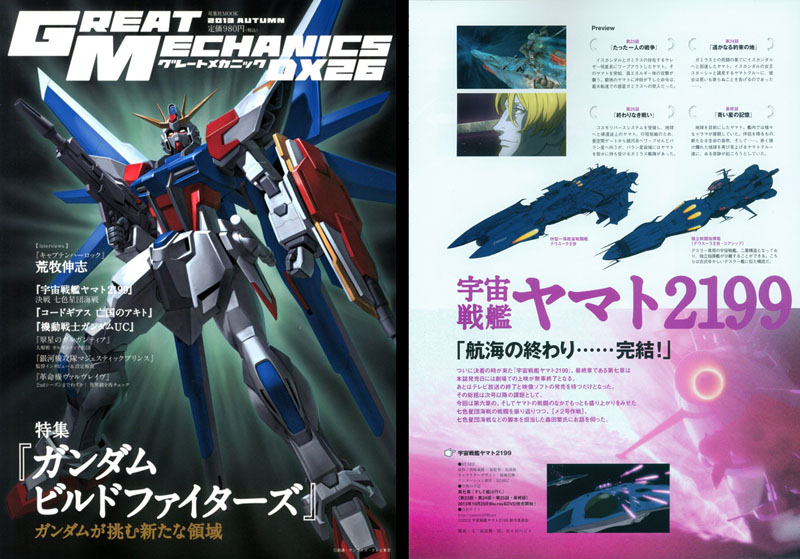 This issue of GMDX upheld the highest standard of 2199 coverage with four color pages dedicated to action scenes from Episode 20, and a six-page interview with scriptwriter Shigeru Morita of Studio Nue, who spearheaded some of the most complex episodes of the series and masterminded the battle of the Rainbow Star Cluster. He talked in detail about the thought process behind the on-screen strategy, and finished with some very sobering thoughts about the creative state of the Yamato saga. 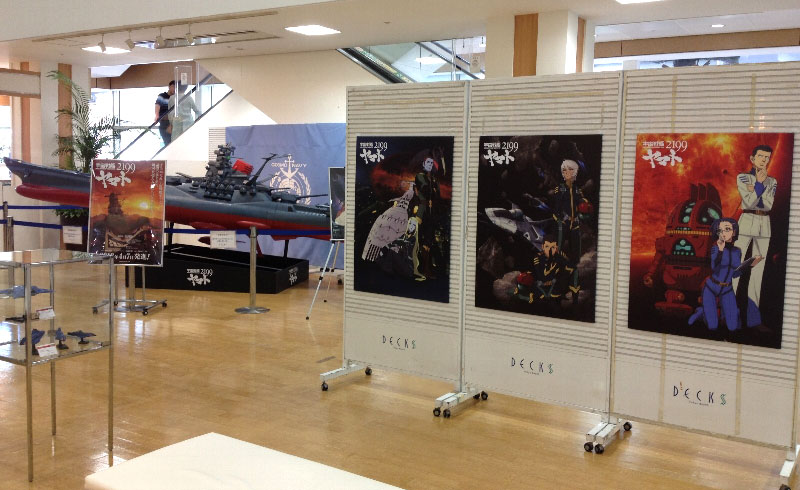 The Decks mall complex on Odaiba island (in Tokyo Bay) is a popular destination for shoppers and those seeking entertainment of all kinds. Yamato fans were given another reason to visit in mid-September when the 5-meter model was parked there from the 14th through the 19th.

Other displays of models and artwork stayed there through the end of the month, and some very special events were held there on the 15th and 22nd. To find out what, keep reading. 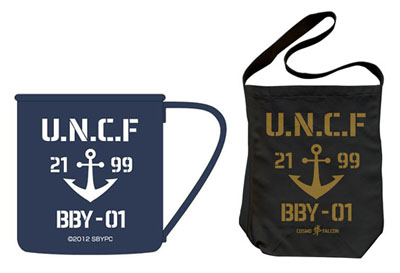 Cospa, Japan’s premiere source for anime-related apparel and personal items, rolled out the new t-shirt and windbreaker shown above. They were followed on September 25 by the mug and tote bag shown at right, all of which would make anyone look like a time-traveler from the year 2199.

This week’s Nico Nico simulcast was the first to take place in public when three of the Yamato girls appeared in front of the 5 meter Yamato at Odaiba Decks. It wasn’t the first time they’d left their regular studio, but it was definitely the largest space they’d ever broadcast from.

The viewing of Episode 24 (which took place entirely on Iscandar) and the regular features of the program took up their usual two hours, during which the girls showed off their own versions of the Garmillas Melanka fighter, waved to fans, and put some real gusto into the customary scene re-enactment.

It was later revealed that Episode 24 scored number 1 in the ratings for its time slot, only the second time in the history of the series. 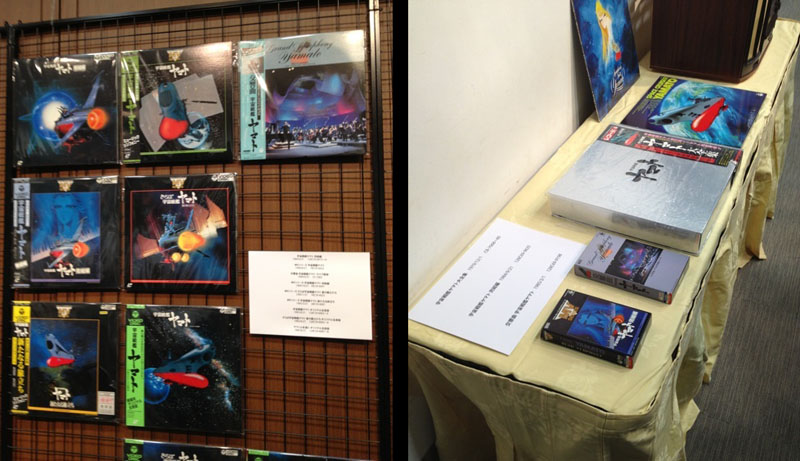 For a certain subset of Yamato fans, this was a very special evening indeed – one devoted entirely to discussion of sound. 2199 sound supervisor Tomohiro Yashida teamed up with music writer Masaru Hayakawa (author of the Yamato Sound Almanac liner notes) to talk in depth about their unique roles in the world of Yamato audio, either building it or archiving it, and compare their thoughts on the important part sound plays in both production and legacy.

More photos of the event be seen here and here.

From elsewhere in the world of Yamato sound came this, the final CD single of the bunch. Distance is the third and last end title from the TV series performed by Jazz singer Juju. The disc contained vocal and instrumental versions of the song, plus two non-Yamato tracks.

This brought the total number of 2199 CD singles to 11: six for the films and five for the TV broadcast (not including variant editions). 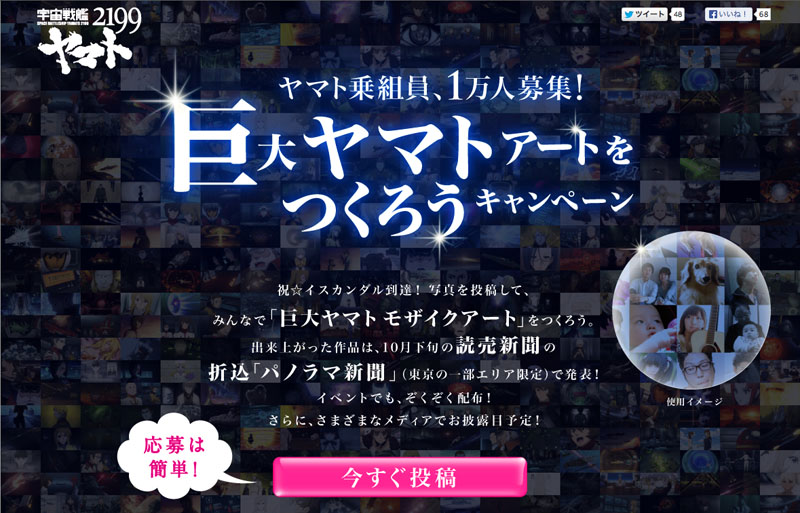 This was truly a first in Yamato history, and perhaps even anime history; from September 20 through October 2, a website was set up to accept photos from fans to place into a giant photo-mosaic to be revealed on October 25 in newspapers and online (timed to promote the video release of Chapter 7). Guidelines for formatting and e-mailing the photos were provided, along with downloadable PDFs to print out for impromptu cosplay. 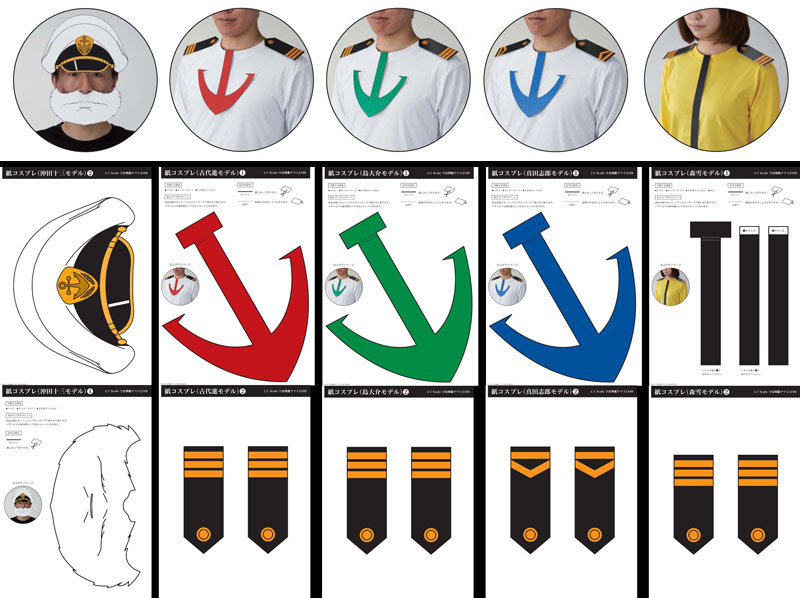 Those who submitted photos were promised online access to the finished montage and instructions on how to find their image. They automatically became eligible for prizes; everyone got access to downloadable Yamato wallpaper, 1,000 would receive a copy of the newspaper poster, and ten very lucky winners would receive a complete set of Yamato 2199 blu-rays. 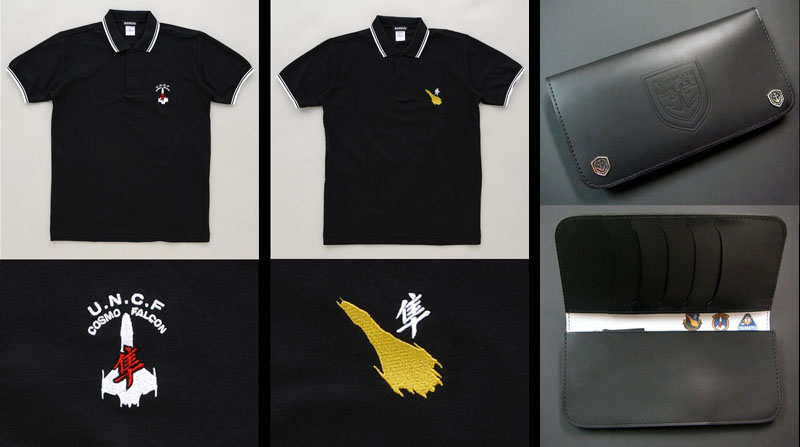 After its first round of Yamato apparel items for the discerning gentleman in August (see Report 23) Bandai wasted little time before announcing several followup items for the fall. A pair of polo shirts with Cosmo Falcon insignia was scheduled for October, and a billfold, tie pin, and Wave-Motion Gun ring for December. 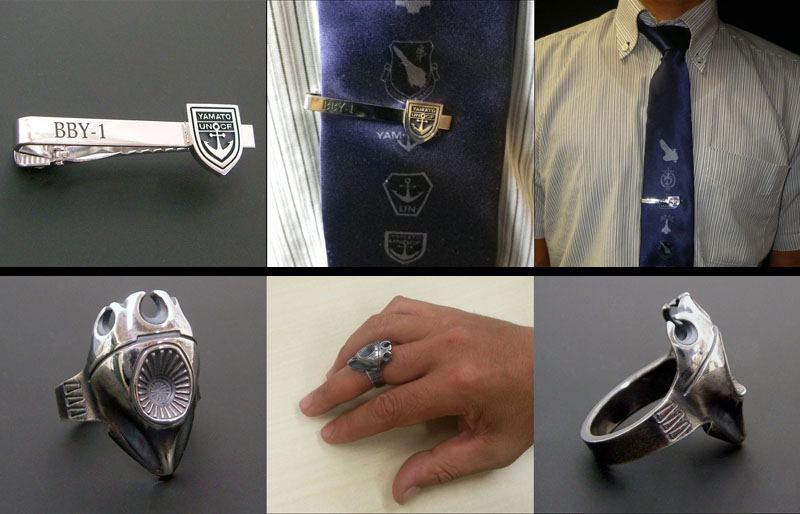 This week’s Nico Nico simulcast was its biggest ever: a 6-hour extravaganza at Odaiba Decks mall that finally put four of the Yamato Girls in front of a live audience for the first time. (The fifth was meant to be there but had to cancel.) The 5 meter Yamato had moved on to its next locale, but there was plenty else to see.

This high-endurance marathon didn’t dampen the hosts spirits one bit, and they took turns at the mike throughout the day. The viewing of Episode 25 was a big draw for everyone, since it was the first chance to see footage that had not been completed in time for the theatrical showings of Chapter 7.

Click here to see a rundown of highlights from this program. Warning: Episode 25 spoilers included!