How to Fight a Space Battle Without Leaving Home

An introduction to the Star Blazers Fleet Battle System

If you’ve ever wanted to relive the exciting space battles in Star Blazers or Space Battleship Yamato or make them happen a little differently or pit one side against another who never met them in the anime, here’s your chance to do it!

The Star Blazers Fleet Battle System grew out of my combination of interests in Japanese animation, military history, and wargaming (the tabletop version of real-word military campaigns). Having been a wargamer prior to discovering anime, the appearance of Star Blazers on American television got me thinking about converting this amazing story into a gaming simulation. After all, who can resist the lure of cool space fleets like these battling it out for the supremacy of the universe!

I also had the opportunity to live and work in Japan for three years, where I acquired the mass of reference material needed to construct the game. Meeting up with Voyager Entertainment, Inc. while attending a sci-fi convention in 1996 laid the groundwork for the production of the game itself.

For those of you who are reading about the Star Blazers Fleet Battle System for the first time, it is necessary to get down to the basics.

The game is designed to be played with pewter miniatures of the space vessels that you have seen in the Star Blazers anime series. Cardboard counters of the vessels are also available inside the rule books for those who want to try the game without purchasing the miniatures. The game can be played on any type of hex map or with rulers to measure out weapons ranges and movement distances.

The major difference between playing a board game and a miniatures game is the dimensional quality that the miniatures lend to the enjoyment of the gameplay. By this I mean the perception of depth, altitude, and distance on the game map. This sensation is especially increased when the miniatures are accurately painted and deployed in combat formations. Other visual enhancements can be added such as planets, asteroids, debris, gas clouds, etc. to duplicate the appearance of deep space.

The game system emphasizes larger scale battles, such as those presented in the anime, but it also allows players to conduct single ship or smaller scale battles without any reduction in game enjoyment.

The inherent characteristics of each space fleet in the story have been reproduced in the rules, but this alone cannot guarantee victory for any of the sides. The victorious fleet will be the one which maximizes the most opportunities during the game. The skill and initiative of the players is the ultimate deciding factor. Pre-written scenarios are provided so that gamers can reproduce the battles from the anime, and alternative scenarios are also suggested. Once players acquire enough experience they can begin to design their own.

A small-scale game can be completed in about an hour. A larger battle could take anywhere from two to four hours depending on the sizes of the forces and the objectives. A typical game can be played with a dozen or less ships on each side. Since many of the miniature packs contain 2, 3, or 6 models, a force of light escort ships can be purchased rather cheaply. The larger cruisers, battleships and carriers are packaged as single units.

Most of the models are made of lead-free pewter. Some of our newest additions are made of a plastic resin. To date there are nearly 60 models available, including the Earth Defense Forces, Gamilon, the Comet Empire and the Dark Nebula Empire fleets. Some of these are new and original designs, not seen in the anime. Complete lists and pictures of the miniatures and books can be found at www.starblazersonline.com. This site also reproduces “battle reports” written by experienced gamers, which will help you to understand how the game is played. More features are planned for the future, as well as information about new releases and how to order current products.

This type of game-play is not for everyone, but if you’ve got a strategic mind and a desire to fight cosmic battles in your own home, the Star Blazers Fleet Battle System is definitely for you! 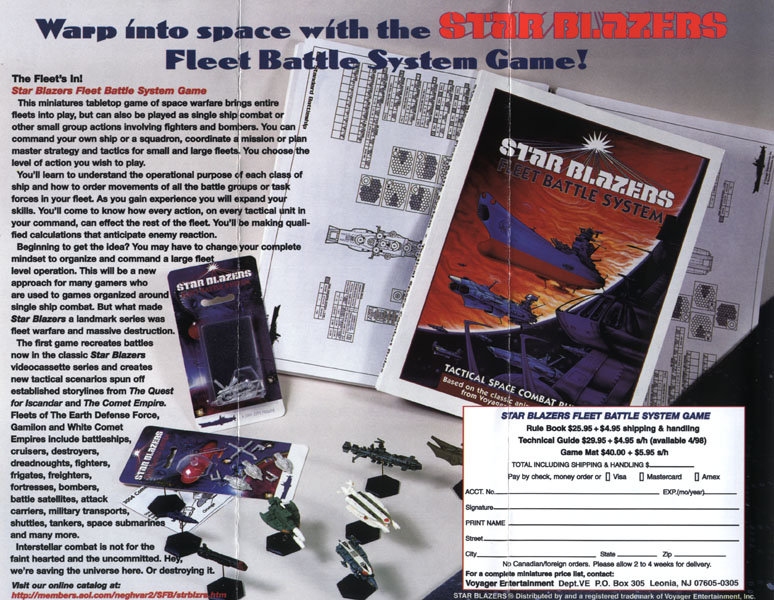