Be Forever Yamato: the Manga By the year 1980, Akira Hio’s career had hit a reliable stride. There was a new Yamato movie in the works, and he was the sole candidate to adapt it into manga form. A screenplay for Be Forever Yamato was finished mid February and storyboards immediately commenced thereafter. Volume 1 of Hio’s manga was not due on bookshelves until October, nearly three months after the film opened. Volume 2 would follow in January of 1981. The early days of scrambling to get a manga to line up with a TV series were a distant memory by this time. 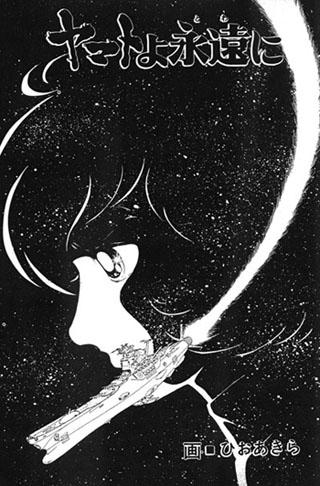 With ample time and reference material, readers had a right to expect a tour de force from Hio, but that isn’t quite what they got. His version of Be Forever certainly did not descend from his usual standards, but it is curious that this was to be the shortest of all his Yamato adaptations (just 367 pages) despite the film’s hefty two-and-a-half hour running time. Farewell to Yamato, of nearly equal length, filled an almost 600-page manga, and though The New Voyage clocked in just north of 90 minutes its manga was almost 50 pages longer than Be Forever. Publishing restrictions may have been the reason; Sonorama now seemed more amenable to 2-volume sets than the 3-book mangas of earlier years. When the Be Forever manga’s unusually high number of compressed dialogue scenes are considered, a two-volume page limit set by the publisher would be an easy explanation. 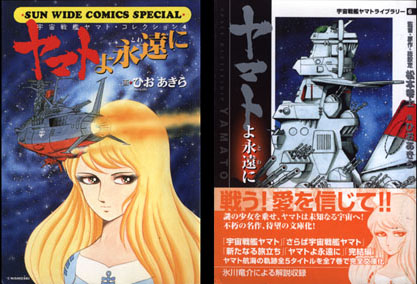 One might wonder if at least the generous production time allowed Hio to put more energy into drawing his own space ships, rather than falling back on his habit of pasting in photocopies, but here too he maintained his status quo. None of this should be seen as a detriment, simply the signs of an artist staying well within his comfort zone.

On the plus side, Hio’s Be Forever did follow the lead of his New Voyage, meaning that the script material he worked from had not yet been edited for film production. So once again, the manga captures a version of the story that didn’t make it all the way to movie theaters. As before, this turns out to be the hidden jewel in an adaptation that otherwise offers little variance from the source.

Another similarity to Hio’s New Voyage was Be Forever‘s reprint pattern, just two single-volume reissues in 1993 and 2005.

Below are a few pages from Hio’s Be Forever that stand out from the pack. Clicking on the thumbnail will open a larger image of the page being described. (Remember that manga pages are read from right to left.) All artwork is © Akira Hio.

The film’s first genuinely chilling moment is the descent of the Hyperon Bomb on Megalopolis City, which Hio captures quite well in this sequence, though his use of an animator’s model is rather obvious.

One scene that did require substantial time and attention is this double-page spread of the Dark Nebula’s air attack, which offers a rare example of Hio drawing his own mecha–quite well, as it turns out.

In the first of the deleted scenes, we cut away from the siege to see Analyzer and Dr. Sado caring for a litter of newborn pigs (reminding us of the sobering fact that Dr. Sado began his medical career as a veteranarian). As storyboarded for the movie, he was actually helping the mama pig to deliver her young, perhaps as a counterpoint to the death and destruction raging outside his office window. Since such a scene so early in the film would have brought things to screeching halt, it’s easy to guess why it was cut.

In this rather significant deleted scene, we learn how the fugitive Yamato crewmembers are able to slip past the Dark Nebula Empire’s blockade in Earth orbit. While ascending on board the presidential yacht, Kodai is lashing out at Aihara for preventing him from jumping ship to help Yuki. Dr. Sado intervenes with a hypodermic and claims that he has just “killed” Kodai. He actually administered a powerful tranquilizer that temporarily reduces life signs to below detectable levels. A few minutes later, all on board are similarly comatose, leaving Analyzer alone at the helm. Detecting zero life signs on the yacht, the Dark Nebula ships let it pass…much to their later regret.

Yamato breaks free of the Astroid Icarus, ready for a new mission. Once again, Hio uses exactly the same spaceship art seen in his last two launch scenes. Three times in a row officially makes it a tradition.

Redressing one of the oddest creative choices in the film, Hio moves the first conversation between Kodai and Sasha from the open deck of the ship inside to the hanger. (It’s tempting to imagine him reading in the script that they were meant to be outside, and assuming it was a writer’s mistake.) He then takes the additional step of moving their conversation up to the observation deck, which has some strong emotional resonance since the last time we saw Sasha here, she was an infant in the arms of her father. This is one of the few cases where Hio’s version of a scene improves upon its source material.

Yamato runs into the Dark Nebula Empire’s fleet of Gorubas, a moment somewhat flattened by the rubber-stamp effect of a photocopier.

The photocopy technique is evident again a few pages later when the Gorubas erupt in flames, but it’s at least refreshing that each of the explosions was individually rendered.

The followup to Be Forever Yamato was, of course, the Yamato III TV series. And though there was a manga adaptation, it would be assigned to another artist. But there was one last mission in store for Akira Hio just two years later when Yamato would commence its final journey.

Continue to the Yamato III manga by Takayuki Masuo