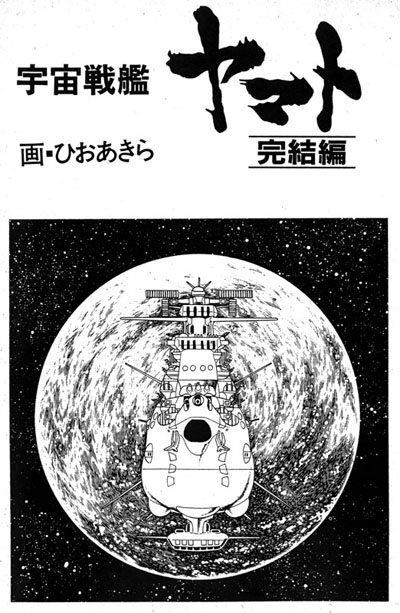 Final Yamato was an exceptional production whichever way you choose to look at it. From its extended development period (over 15 months) to its running length (163 minutes) to its double-release (first in 35mm and 8 months later in 70mm), it broke the mold of all the previous Yamato movies and lead to the longest “farewell tour” in anime history.

The film’s writing period formally ended in July, 1982, but even then the fourth and so-called final draft of the screenplay was being continually tweaked and adjusted as storyboarding and animation commenced. This made life difficult for everyone “downstream” in the production line, but relief was to come from an unexpected corner: the publishing licensors.

Taking full advantage of the movie’s advance hype, which had been building for over a year, the publishers each managed to get something onto bookstore shelves prior to the March ’83 premiere. Most of these were “part 1” novelizations (to later be followed by “part 2’s” ), which meant that at least the first half of the screenplay had to be locked by the time their respective writers needed to start working.

Since Akira Hio had to both write and draw his version, he was very likely the first one out of the starting gate. Since his first manga volume was set for a February release, it would have to be adapted from a script that was still somewhat volatile. Fittingly, it helped the Final Yamato manga to follow Hio’s well-established tradition of preserving scenes that would later be cut from the film. 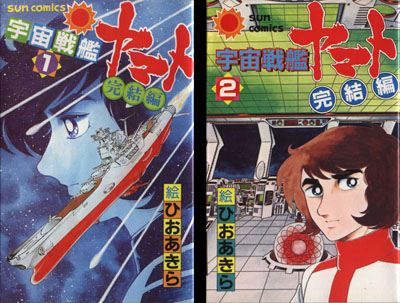 His second volume was well within a publishing safety zone, appearing three months after the premiere and thus having the movie itself to draw from. The end result is that all the “extra” scenes are crowded into volume 1. We can only wonder what a Final Yamato manga based on an earlier script would have contained. Since the first draft is said to have been nearly four hours long (the screen-time equivalent of 10 TV episodes) the differences would have been substantial, perhaps giving Hio a chance to relive his Space Battleship Yamato experience and create a completely different “time capsule” manga to be puzzled over for years to come. 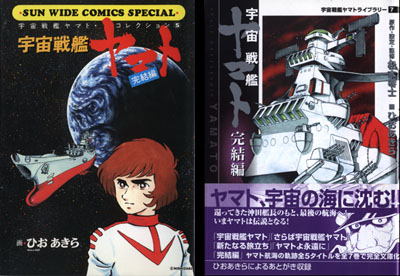 The reprint schedule for Final Yamato followed the pattern of New Voyage and Be Forever, reappearing in 1993 and 2005 as single-volume editions.

Below are pages from the manga that are of particular note. Clicking on the thumbnail will open a larger image of the page being described. (Remember that manga pages are read from right to left.) All artwork is © Akira Hio.

Right from page 4, Hio flexes his big-scale muscles with this montage of Earth history, hilighting the extinction of the dinosaurs and the Biblical flood, events both tied to appearances of the water planet Aquarius.

Daisuke and Jirou Shima pause in their one-on-one soccer game to discuss the pending fate of Earth. This scene was animated for the film and cut from the 35mm release only to be later restored to the 70mm version when it was decided Shima needed an intimate moment early in the story. But until the 70mm release, this was the only version of the scene that fans could see.

Immediately after the soccer scene, Kodai endures a terrifying dream from which Yuki saves him. He then wakes up in a hospital, having recovered from the Denguil’s attack on Yamato with hyper-radiation missiles. This scene may have been animated, but has never appeared in the film.

In the first aggressive move against Earth, Lugal de Zahl’s advance fleet commences a brutal attack on the civilian emigration ships. Unlike in the film, Hio takes the opportunity to show the victims themselves, turning the Denguil into even worse villains.

It’s the photocopier to the rescue as EDF battleships line up to defend the civilians.

Naturally, the Denguil make short work of the photocopy fleet…

…then proceed to attack Earth itself, allowing Hio to return to the type of scenes he does best.

Captain Okita’s dramatic return from the dead gives us a look at each of the main characters, but sorely lacks a wideshot to give us the full impact of the event.

This is the fourth and final time Hio draws Yamato launching on a new mission. Or, more accurately, he photocopies the launch from his 1978 Farewell to Yamato manga. At least he chose the best-looking version to close out the tradition.

Another scene that was deleted from the film involves a unique weapon deployed by the Denguil against Yamato in the Pluto battle; an egg-shaped remote-controlled laser satellite. This scene takes place as Kodai is racing to his Cosmo Zero to take off on a recon patrol.

Finally succumbing to his shoulder wound, Kodai recovers in Yamato‘s medical bay after the Pluto battle. This is another brief scene that was cut from the film.

…which is the worst possible moment for Emperor Lugal to launch his sneak attack. Dessler comes to a timely rescue, allowing Captain Okita to make his last stand. In the movie, all this happened long before the flood began. This becomes the last point of spoken dialogue in the manga. As with the movie, everything from here on is wordless…

…up to and including the closing montage, which brings the saga to a close in both animated and manga form.