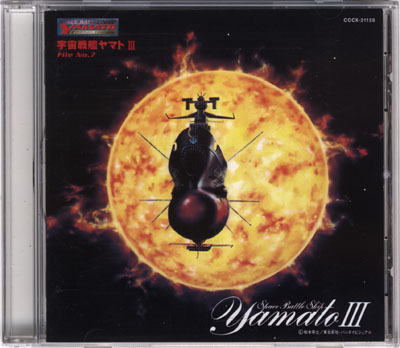 Originally titled Yamato III, this series was easily the most ambitious Yamato project of them all, slated to run 52 episodes and depict a major interplanetary war between Desslok’s new Galman Empire and the suspiciously Russian-looking Bolar Empire. (Remember, the series was conceived in the early 1980’s, during the Cold War, which also eventually came to an end.) Planet Earth was, in modern terminology, “collateral damage” in this conflict, and the Yamato (as ever) rose to the challenge. Though the story would be told largely as planned, it ran into unexpected turbulence in the ratings and ultimately spanned only 25 episodes.

In a sense, Space Battleship Yamato III stands at the crossroads of the whole Yamato series. The saga of Yamato from the late 70s continued smoothly (despite the entropy depicted in Farewell to Yamato), from the TV series Yamato 2 to The New Voyage, which served as a prologue to Be Forever Yamato, which is considered to be the third “movement” in the saga. Then came a new TV series, Yamato III.

Envisioning this series was a great task for all concerned. Though it was the third TV series, it had a different starting point than Yamato 2, which was a recomposition of a feature film. Now a completely new story was required. Moreover, by this time, the original theme of Yamato had been thoroughly explored, and each story had reached a satisfactory conclusion.

Over and above these conditions, the production of a new, year-long TV series had to live up to the name of Yamato, the big hit title. Indeed, the launch of Yamato III faced as many difficulties as that of the Space Battleship Yamato itself.

The plot extensively included the element of a suspenseful countdown, as seen in the first series. The story is set in 2205 A.D., three years after Be Forever. (Later this would be revised to 2203 A.D.) As a result of the power struggle between the Galman Empire and the Bolar Federation at the center of the galaxy, one stray missile plunges into Earth’s Sun, resulting in an abnormal increase of nuclear fusion. The Sun would erupt in a super-nova three years later, but all life on Earth would die out in one year. Thus, Yamato launches on a journey to find a second Earth to which mankind can emigrate. Yamato’s new mission is full of magnificent SF images, owing chiefly to the imagination of SF writer Aritsune Toyoda, who had participated in Yamato since the first series.

Susumu Kodai is finally appointed as the third Captain of Yamato. Also added is a variety of new crew members, such as Ryusuke Domon (A.K.A. Jason Jetter) and Takashi Ageha (A.K.A. Flash Contrail). With these characters and many more aboard, Yamato’s new journey begins.

Dessler, who became a worthy protagonist in The New Voyage, is appointed as the leader of the Galman-Gamilus Empire, and Dessler fans rejoiced at his rise from lone wolf to recovered glory. The new menace is the Bolar Federation, a gigantic military state which wages war against the Galman-Gamilus Empire for dominance of the galaxy. They are one point of a power triangle with Earth and Gamilus. The fact that Yamato adopted the complicated political structure of the real conflict between the West and the East reflects the period of the 1980s when Japanese animation, having experienced a popularity boom, started reaching for higher sophistication.

Yamato III also had the indispensible “space goddess” element in Princess Ruda (A.K.A. Gardiana) of the Planet Shalbart, a legendary planet which once peacefully united the galaxy thousands years ago. This planet has always been ruled by Queens, and Ruda is the next successor. Shalbart is described as an idyllic planet which had completely relinquished all of its weapons. This functions as an important element of the anti-war theme of Yamato, which was always a dilemma; while advocating the grand theme of love, the story could not proceed without the motivation of war.

The series concept began with four major story arcs spread over 52 episodes. Unfortunately, the series was beset by unexpectedly low ratings, owing to fierce competition on TV . Because of this, it became necessary to curtail the series to 25 episodes and leave some of the grander concepts unexplored.

Return to the Yamato III Discography