After the unprecedented success of Comico’s first Star Blazers miniseries, a second miniseries was commissioned. It was to be written by Markalan Joplin and Phil Foglio. This time, a plan was made to reconcile some of the continuity flaws between the Comet Empire and Bolar Wars anime translations.

This plan included explaining how the Masterson family became Desslok’s “Talan” or “aide-de-camp” in the thinking of writer Joplin. However, Joplin’s untimely death interrupted these plans and the miniseries had to be completed by others. In any event, an entertaining story was still produced. This series was to be an issue longer than the previous one, and it also racked up great sales and some memorable original characters. However, it also had its own flaws…

The Rise of Lotar 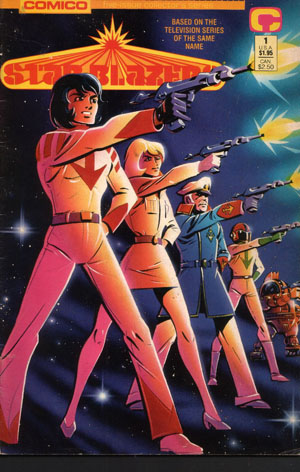 Sometime in the unspecified past, we see a flashback to the day Leader Desslok assumed power on Gamilon. His “ancestral friend” Talan, introduces his son “Masterson” to serve as Desslok’s future second-in-command. The story jumps forward to 2202, with Desslok in command of his fleet after the loss of Gamilon and Iscandar. Two Gamilon colonies named Peralta and Vista have fallen under attack. Vista was destroyed by an alien force led by a “Supreme Commander Lotar,” who appears to have been covertly aided from within the Gamilon government. Lotar’s weapon is a huge dreadnought called a Planet Crusher, a massive spaceship with the power to destroy entire planets. Desslok discovers that Lotar’s next target is Earth.

Meanwhile, with the aid of the down-home Colonel Cosmo “Pop” Shannon (founder of the Black Tigers) the Argo is sent on a scientific mission towards Planet Eurythma. Alien forces of some type are also headed there. Shannon reminisces about a bitter fellow commander named Helms, against whom Shannon and his troops mutinied. During one of the pre-Gamilon wars, Helms launched a number of offensives that cost
the Earth government many troops and led to the loss of his rank. Banished from Earth, Helms is secretly planting atom bombs in Earth’s underground cities. His motives are unknown.

The Argo arrives at Eurythma, where Wildstar and Nova meet up with the leader of a scientific mission there, Pop Shannon’s daughter Jessica. Derek and Nova later notice a strange phantom figure in Eurythma’s sky and have a moment of romance, and Lotar’s mercenaries begin to attack the planet. 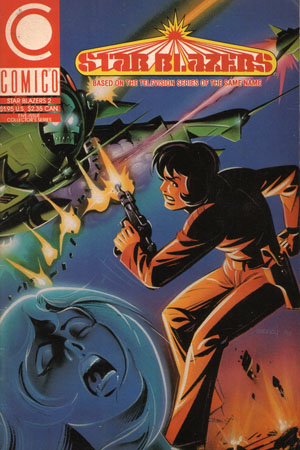 With the Eurthyma science station and the Argo under attack, Black Tiger commander Hardy is sent down to the planet by Colonel Shannon to rescue Jessica. Derek and Nova safely return to the scientific station’s headquarters. They order Sandor and Venture to repel the enemy fleet, just in time to see the Gamilons arrive. We discover that Helms is working with Lotar and his mercenary forces for the ruination of Earth.

Wildstar and Nova return to the Argo for a conference with Leader Desslok, who gives them some clues about the mercenary fleet. Desslok provoked them into attacking the Argo so he could work at tracking down the traitors within his own forces. Some of these traitors are working with a General Terminax, a Gamilon deserter now allied with the mercenaries. Desslok plans to use Earth and the Star Force as bait to catch the mercenary fleet and destroy them. Meanwhile, Terminax is plotting to attack both the Argo and Desslok’s fleet. 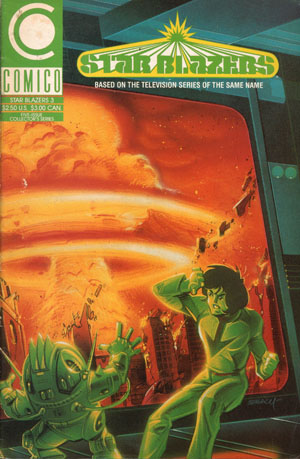 Terminax attacks Desslok’s fleet with a Gamilon carrier, calling for the Gamilons to abandon Desslok and join his cause. But the Gamilons remain loyal and they pull back to allow the Argo a shot with the wave-motion gun, which destroys the mercenary fleet.

The Star Force captures a dying Terminax, and Desslok interrogates him on the Argo. Terminax speaks of the Gamilons’ hate for Desslok and the Planet Crusher heading towards Earth. He then brags that he has found the Gamilons’ ancestral world, Galvin, whose people serve Lotar. Desslok advises Wildstar to head for Earth after Gamilon technicians help to repair the Argo. Later, Desslok finds assassins in his own ranks aboard his flagship.

A hidden level is found on Planet Eurythma that Jessica Shannon is given permission to investigate. On the Planet Crusher, we finally meet Lotar. He is a strange cyborg, slaved to the massive ship’s systems. He arrives at Eurythma with the Planet Crusher, which then mysteriously stops as it is about to attack the planet. It then warps away to Earth.

Earth is already under attack from another segment of the mercenary fleet led by General Helms. He demands that General Todo of the EDF surrender to him in person. To underscore his demand, the atom bombs begin to destroy Earth’s underground cities. 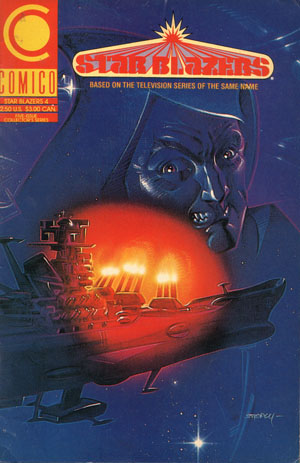 En route to Earth, the repaired Argo receives a report from Planet Eurythma. IQ-9 and the Shannons are there with Gamilon Science Officer Vixol, a young woman sent by Desslok to find out why the Planet Crusher stopped its attack. On Earth, Helms threatens to set off more bombs in the underground cities. Todo fakes a heart attack to stall negotiations. Todo admits how he “created” Helms back during the days of the Unification Wars, when he made a deal that allowed Helms to be exiled.

Desslok investigates the wreckage of Terminax’s flagship and finds that he truly did discover the location of Planet Galvin, but Desslok is also being targeted by another assassin.

The Argo warps in over Earth and begins attacking transmission towers to keep Helms from setting off his bombs. They then attack Helms’ ship and fleet.

On Eurythma, the scientific party discovers that the Eurythmans were the inventors of wave-motion technology. Some of them left the planet and colonized Iscandar, while others built Planet Crushers and wiped themselves out. The Planet Crushers are hidden within Eurythma itself, inside a huge warp space, waiting to be used again. 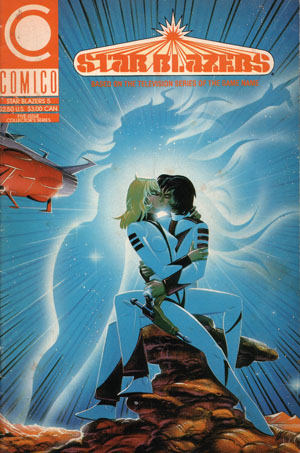 On Earth, the Black Tigers take out the remaining atom bombs in the underground cities. Todo shows himself to Helms, who grows angry and wild, allowing the Argo a chance to finish him off.

On Terminax’s ship, the assassin trying to kill Desslok turns out to be Masterston, Talan’s son. Talan defends Desslok and tells him about the hidden fleet of Planet Crushers. Lotar calls to offer Desslok both the Fleet of Planet Crushers and power over Earth. Desslok refuses and stands with the Star Force. Lotar then opens a hyperdimensional gate to the inside of Eurythma.

Colonel Shannon insists that Wildstar use the wave-motion gun to destroy Eurythma. Wildstar tries it, but only the shell of the planet is destroyed. The scientific party is safe inside the inner dimensional core, where they find the Planetary Goddess who powers Eurythma. The beautiful phantom was bound there by her people. She states that to destroy Lotar, she has to be directly attacked with the Argo‘s wave-motion gun.

The Argo warps into the empty core of the planet. After rescuing the scientific team, the Argo wave-guns the Planetary Goddess. This destroys the planet’s core, Lotar, and the other Planet Crushers. The Earth-Based EDF wipes out the remainder of the mercenary fleet.

Afterward, Desslok decides to search for his ancestral world while possibly starting a romance with Vixol. Derek and Nova have a romantic moment of their own. Peace returns and the story ends.

A discussion with Star Blazers super fan Rob Fenelon about the second miniseries:

How did the second series come about?

Comico got another deal, to do another comic book. And once again, they hired another author who had never seen Star Blazers. His name was Markalan Joplin. They hired me to bring him up to speed, so I supplied him with the anime comics from Books Nippon, old Roman Albums, and had videotapes of the entire series. He wrote back right away about some continuity errors between the second and third season.

The reason for the continuity errors was that when Claude Hill of Westchester Films had the third series dubbed, he tapped his old friend Peter Fernandez to write it. Peter had never seen the second series. And this is one of the great regrets of my life, I kick myself because I should have known what was happening.

I got a phone call from Joanne Melton over at Westchester Films one day, asking me if Desslok was in love with Queen Starsha of Iscandar, and I said “Yes, here’s why…” I explained this other stuff, then, from New
Voyage. They sent me a check and I was happy with that, but it never occurred to me to ask, “Why do you need to know this?” Then, the third season came out. If I had asked why they wanted to know about character relationships, and they had told me, I could have easily gotten myself in there as a continuity editor.

General Talan got renamed “Sgt. Masterson.” Leader Desslok became “Emperor Dezlok,” stuff like that. If I had been around, I would have been able to ameliorate the effect of this somewhat.

Marakalan Joplin was coming up with a way to fix this. In his series, we find out that “Talan” is not the name of the general, but is a rank, a title of the Leader’s right-hand general. Talan is kind of like “seneschal” or “aide-de-camp” or “second in command” or something like that.

Talan was training his son, Masterson, to be the next “Talan.” The “old” Talan would die protecting Desslok from an assassin, and Masterson would step in to fill his dad’s shoes. Unfortunately, Joplin died before he was able to write the last issue, and the editor either did not know
of his plans, or did not bother to communicate them. The replacement writer completely missed the boat, and had Masterson as the assassin trying to kill Desslok.

Then, of course, Masterson himself was killed.

Joplin jumped through all those hoops to explain why “General Talan” from the first two series became “Sgt. Masterson” in The Bolar Wars, and the new writer just made it worse. It was frustrating. Extremely frustrating, but at least Comico paid promptly.

And did sales hold up on the second miniseries?

The comics sold extremely well in both the first and second incarnations.