Yamato’s Executive Producer Yoshinobu Nishizaki was by all accounts the most important single figure in making the saga into the smash success that it was, thanks in no small part to the early alliances he made with licensors. Over the long run, one of them became so heavily invested in Yamato that when Nishizaki stepped away from it in the late 1990s, they essentially took his place. That company was Bandai, and since Yamato was the first anime license to put them on the map, it was only fitting for them to later become its shepherd.

The proper modern name for this many-armed empire is Namco Bandai, and under this umbrella there are many separate divisions that specialize in one area or another. Bandai Visual, for example, oversees property licensing and thus their name turns up on almost every modern Yamato product. Emotion is the home-video arm, and all the Yamato videos made since 1990 carry their name. Other groups specialize in the making of toys and model kits. We’ve already met Popy, the first of these to release Yamato toys, and now we’ll get acquainted with another: Banpresto.

Banpresto started business in 1977 under the name Hoei Sangyo and manufactured coin-operated arcade video games. The name changed first to Coreland in 1982 and finally to Banpresto when the company became a subsidiary of Bandai in February, 1989. Now with access to more licenses and resources, they began making anime-based toys for its popular “UFO Catcher” crane-arm arcade machines.

When Mimuko ended the long drought of Yamato toys in late 1998, Banpresto was already preparing to launch the first true blitz that had been seen in almost twenty years. Their lineup would demonstrate a creative blend of form and function that set an early standard for all the other new toys that were to come. From spring 1999 to fall 2000, a steady stream of Yamato toys could be won in your local arcade for a few tokens and some skill with a crane arm. Or if you could wait a bit longer, they would eventually materialize in second-hand toy stores? Just like magic!

This set of eight different “keychain mascots” came ready-made to join you on your travels with a single click. The set consisted of Yamato, Kodai (Wildstar), Yuki (Nova), Captain Okita (Avatar), Analyzer (IQ-9), Mamoru Kodai (Alex), Dessler (Desslok) and a Cosmo Zero. The initials “AP” on the label cards stood for “ArtPresto,” a printing company and package designer that Banpresto had acquired in 1998.

These two 6″ mini-ships, a “super-deformed” Yamato and Andromeda, were weighted at the bottom to stay upright in a pool or tub while their little windup propellers zipped them along at attack speed. That is, if any serious fan could bring themselves to get the things wet. Banpresto made similar waterships for Leiji Matsumoto’s Captain Harlock series. 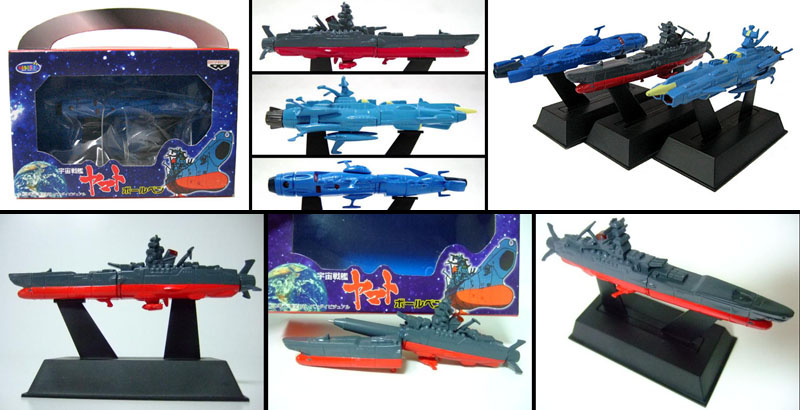 It may have looked like a fine little replica, but a single pull would reveal a sturdy ballpoint pen inside each of these three 5″ ships: Yamato, Andromeda, and Dessler’s Battleship. And when the ink ran dry, you’d still have something to display. You have to admit, that’s a far better fate for an empty pen than ending up in a landfill. 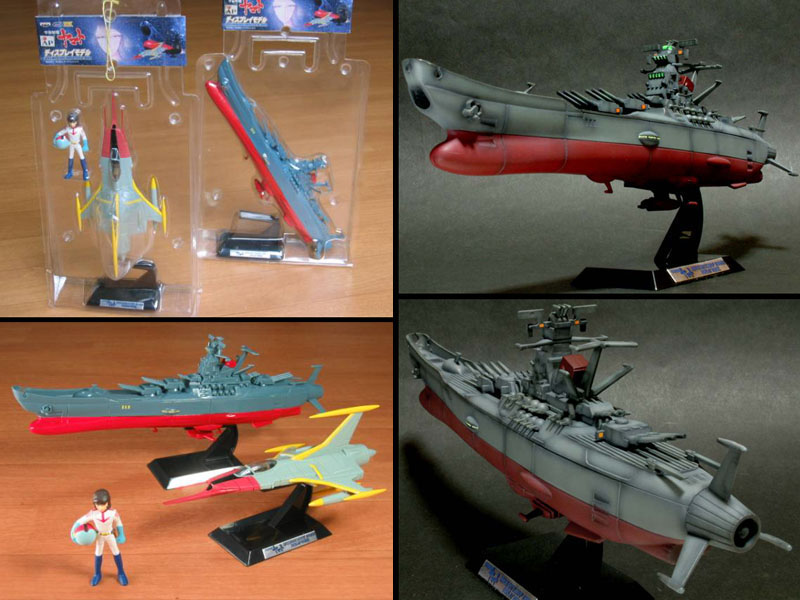 There was no secondary purpose to these babies, just pure fun. At nearly ten inches long, this Yamato was larger than those released by Mimuko during the same year, and the 8-inch Cosmo Zero was the first that had been seen since Bandai’s model kit from the 1970s. (And the furious-looking Kodai figure was a nice bonus.) Of particular note, this was the first Yamato toy that had ever been sculpted with a rounded belly as seen in the anime. It took 25 years, but someone finally got it right. From this point onward, the vintage flat-bellied Yamato was a thing of the past.

A keychain mascot is one thing?but a keychain mascot with a penlight is quite another. The five figures in this set each came equipped with a button that could help you find whatever you just dropped while fumbling with your keys in the dark. The set consisted of a 3.75″ Yamato with wings in, another with wings out, an Andromeda, Analyzer, and Desslok’s Battleship. Naturally, the Yamato’s penlight was also its wave-motion gun. How cool is THAT?

Keychains got serious with this set of seven mascots based on the very serious movie. The set consisted of Yamato, Andromeda, Desslok’s Battleship, Kodai holding Yuki, the Hero’s Hill statue, and just to cap it off right, Emperor Zordar and the Comet Empire! 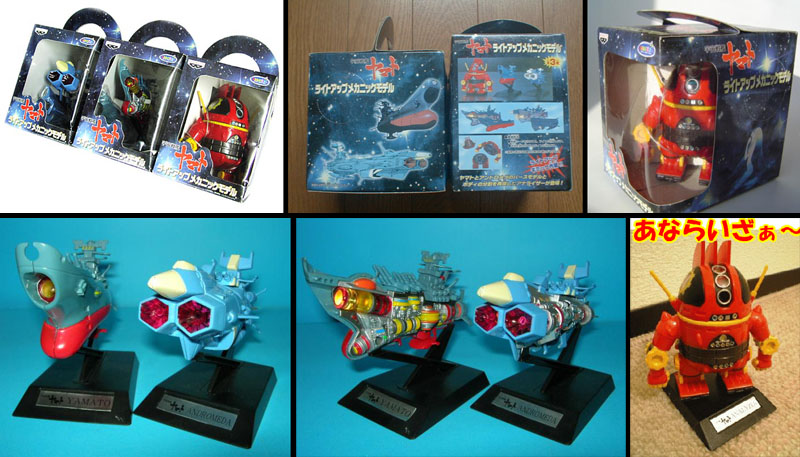 Returning to the “super-deformed” world, Banpresto delivered another Yamato and Andromeda, this time with removable sides to show off the inner workings, which bore very little resemblance to animation designs but could at least light up impressively. The Analyzer model, certainly one of the best-looking versions to date, could separate into head, chest, and leg components.

Here’s where the fun begins! For the first time, fans could hold a laser-emitting Yamato pistol and take pot shots at an apoplectic super-deformed Dessler figure. Hitting a light sensor in his belt caused a spring to pop out of his feet and knock him over. How could you NOT want to play with this one? 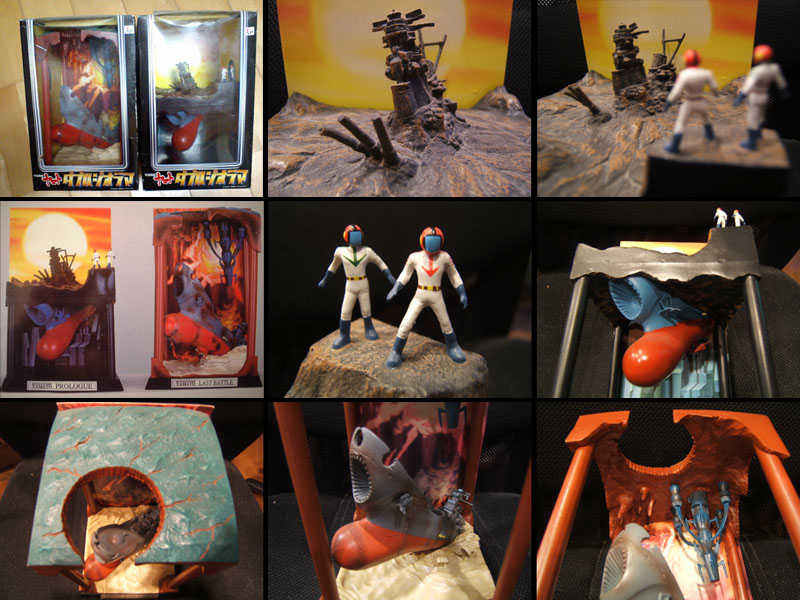 The last two items in the Banpresto toy line were certainly their finest. Sculpted with imaginative forced-perspective, they offered two fascinating snapshots from the first TV series. Diorama 1, titled “Prologue,” depicted intricately painted inch-tall figures of Kodai and Shima staring at the ancient Yamato hull above ground while the secret restoration project goes on beneath their feet. Diorama 2, titled “Last Battle” has Yamato bursting triumphantly out of Gamilon’s acid ocean, about to lay the smackdown on the empire itself. Including their cardboard backdrops, each diorama stands just under 10 inches tall. 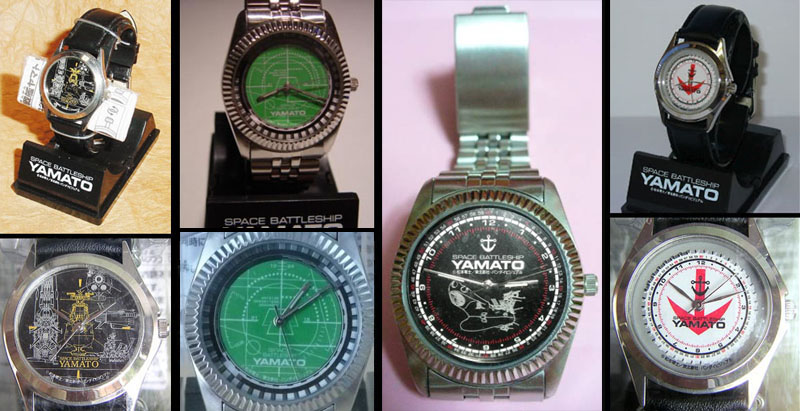 Banpresto’s last Yamato products stepped outside the toy world but are included here for the sake of completeness. These four watches featured Yamato schematics, a Leiji-Matsumoto-style gauge, a ship drawing, and an anchor design that was evocative of Captain Avatar’s hand-held “Cosmo Chronometer” from the first TV series. A completely faithful replica of that has yet to appear, but there’s still plenty of…time… 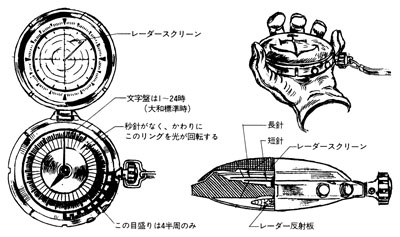 Special thanks to Yamato superfans Steve Harrison and Carol Hutchings, and to Adam Newman at Bandai for aid and assistance!