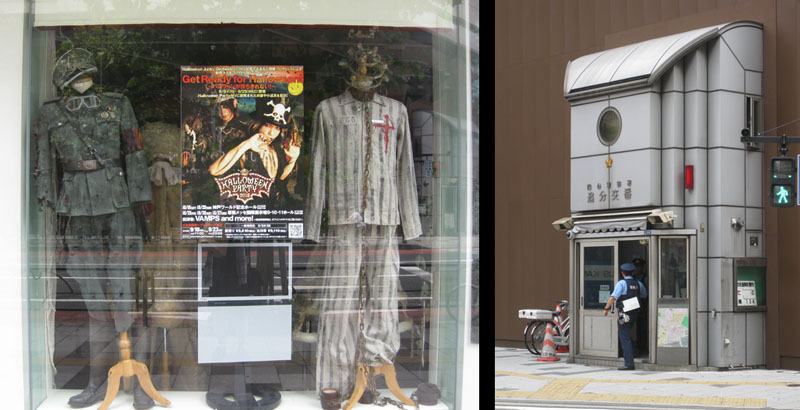 Left: remember what I said about any excuse for cosplay? This was a window display in Shinjuku. Try something like that in New York! Right: a small police office, attached to the side of a department store. Each one contains a hidden elevator that drops you 100 stories down to the giant robot hangar. Or the mole tank command center, depending on your precinct.

Left: coolest Harlock swag ever. Right: the entire JR East train network in map form. Not as tough as it looks.

Exterior decor to the left of the front door.

Exterior decor to the right of the front door. 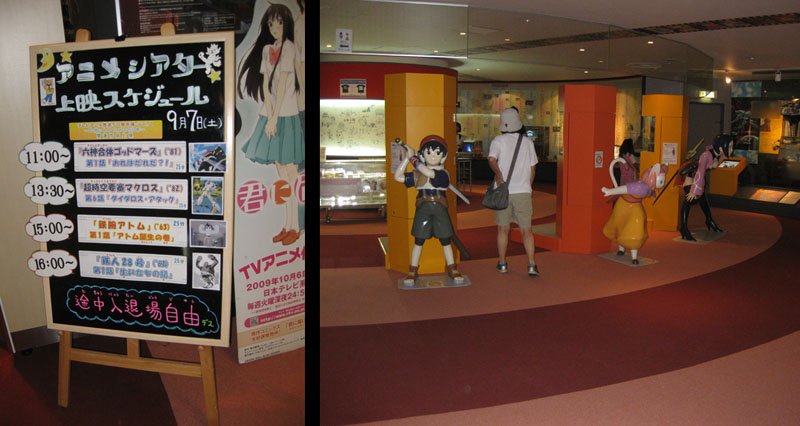 Left: the museum’s screening room schedule for the day, a tie-in to the “50 years of anime robots” exhibit: Godmars, Macross, Astro Boy, and Tetsujin 28. Right: someday I want to see every 1/1 scale anime figure in one place. That’s not asking too much, is it?

Recreated animator’s desks. The one at the right is attributed to Yoshiyuki Tomino, creator of Mobile Suit Gundam, but they seldom stay this neat in real life. 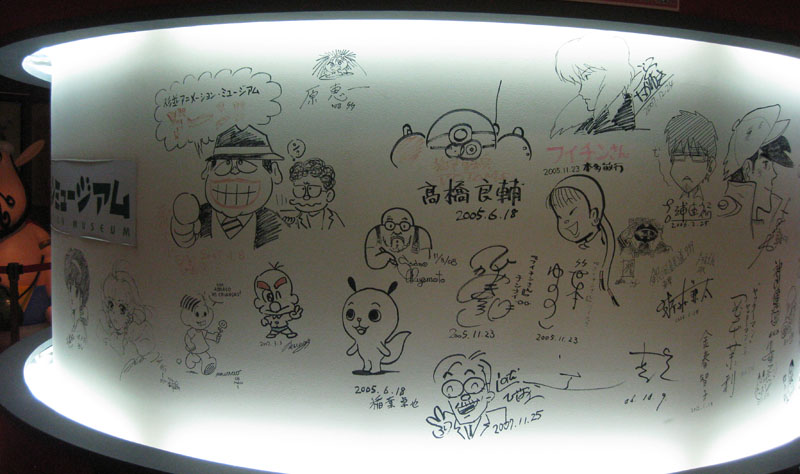 The central hub of the main room had sketches all the way around it by famous anime and manga artists.
Let’s take a turn around it, shall we? 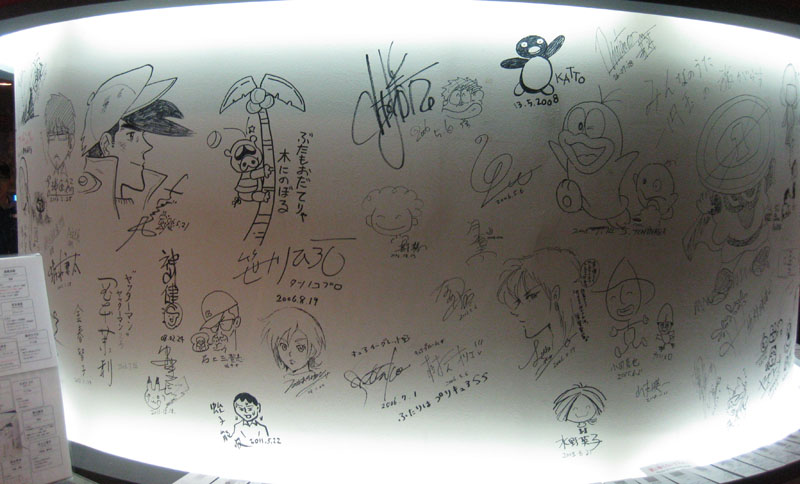 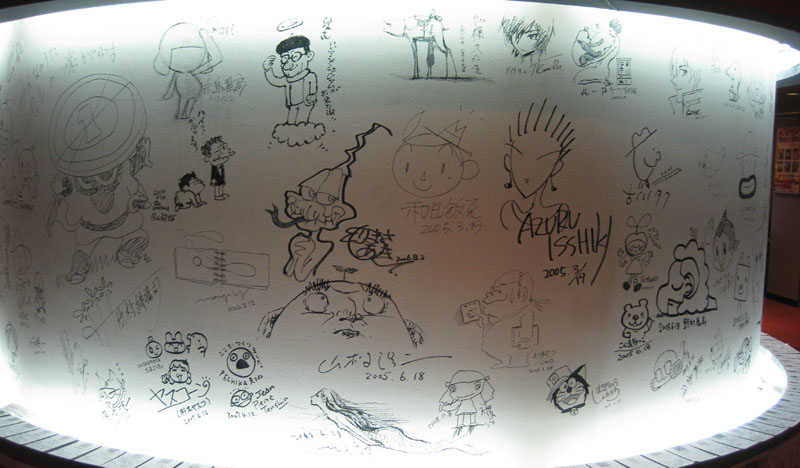 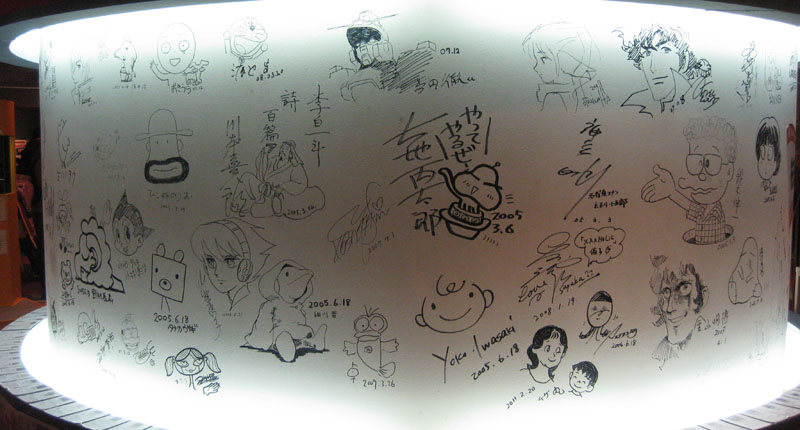 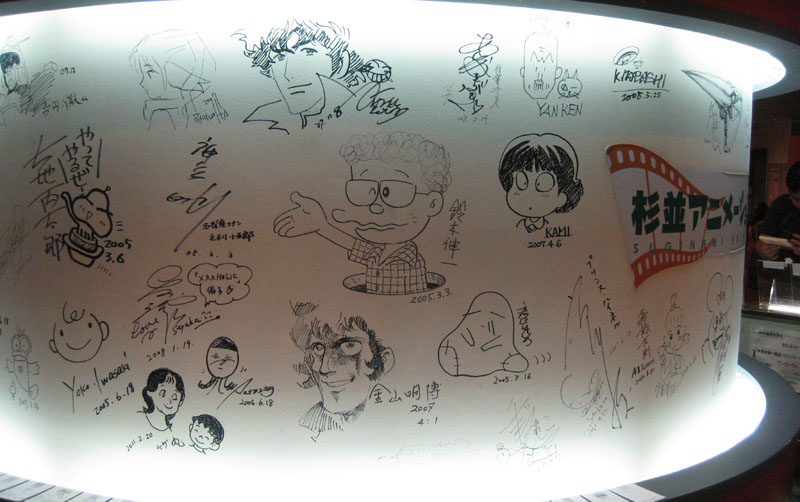 The historical index of film and TV anime from 1917 onward, with artifacts from the respective decades at the bottom.

The center portion. The TV in the 1980s section actually started playing the opening title from Fist of the North Star when I got to it. Must have seen me coming.

Left: me, with the largest Gundam model kit ever sold. Yes, there was a time when you could buy this bruiser. And probably encase a child inside it. Right: Photography was verboten beyond the entrance to the “50 years of Anime Robots” exhibit. Turns out it wasn’t photo-worthy anyway.

Unexplainable things in the back streets of Kabuki-cho. Where they belong.

Left: would you order that from Burger King, or attack it with a Jaeger? Right: coming soon to the Shinjuku Wald 9 theater: Wolverine Samurai, Episode Nippon.

Cast members on stage at the 009-1 movie premiere. The star of the film video-skyped in from Paris.

Continue to the last photojournal

One thought on “Yamatour 2013 Photojournal 6”