Though they no longer exist as a company, Mimuko was instrumental in returning Space Battleship Yamato to toy shelves, and the charge they lead is still underway. They were the first to acquire a Yamato toy license from Bandai Visual in the 1990s and end a dry spell that went all the way back to 1981. Quite fittingly, they chose to announce the return of Yamato toys with a tribute to the one toy that got it all started. 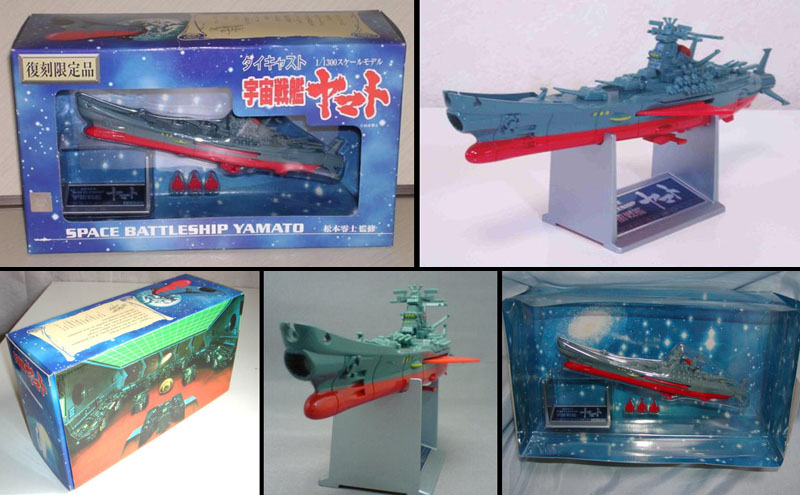 Exactly twenty years after the first Yamato toy was released by Nomura, Mimuko brought it back. Except for the outer packaging, fans who had owned the original as children would have enjoyed the flashbacks. But what made the packaging of special interest was a message from Leiji Matsumoto on the box top. When this product was later imported to America by Toycom, a translation of the message served equally well as a stirring personal statement and a blessing for the return of Yamato toys…

Yamato is a nation’s utopia and also one of the original points of my animation. I am still continuing my endless voyage across the sea of stars with Yamato. Let’s take this voyage together as crew members and also as companions.

Click here to examine this toy in greater detail.

This image from Be Forever Yamato graced the back of the box. The original art is owned by Leiji Matsumoto.

Mimuko’s next release was a series of high-quality miniature spaceships branded as the “Museum of Leiji Matsumoto” series. Made of sturdy polystone resin, they were replicas of Bandai’s classic Mechanic Scale model kits. Three versions of this 5″ Yamato were first out of the starting gate, all released in July, 1999. No. 00 was a limited numbered version painted silver, No. 01 depicted Yamato in space, and No. 02 showed Yamato in drydock. 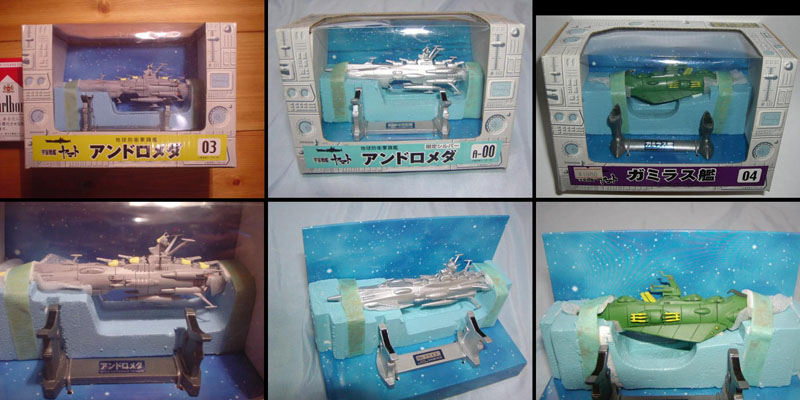 The next set of three was released in August 1999. Ship No. 03 was a drydocked Andromeda, No. A-00 was the same ship painted silver, and No. 04 was the first enemy ship of the line, a Gamilas Destroyer with a custom base meant to evoke organic Gamilas architecture.

That same month saw a different product from the “Matsumoto Museum,” Mimuko’s light-up Capsule Collection. These were smaller-scale versions of the first three Yamatos set with tiny backdrops in an Iscandarian message capsule that would light up with push of a button. Naturally, it was also a keychain. 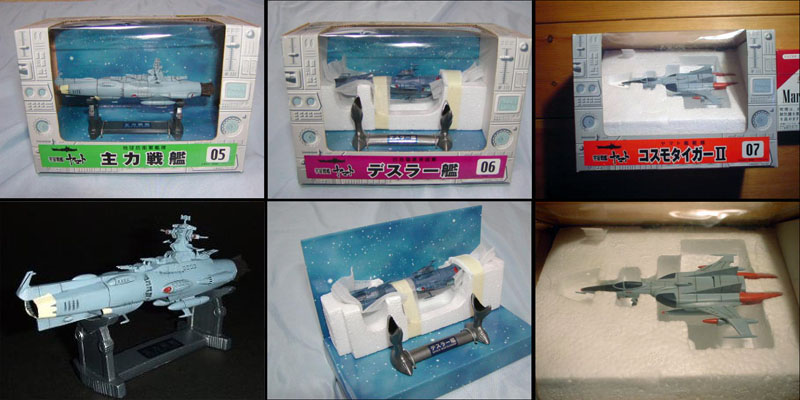 Three more of the polystone ships arrived in October and November. No. 05 was an EDF battleship, No. 06 was Dessler’s blue battleship, and No. 07 was a handsome Cosmo Tiger II which differed slightly from the Bandai kit it was based on, since it lacked a rear gun turret. Ship No. 08 (not shown) was the green version of Captain Harlock’s Arcadia. 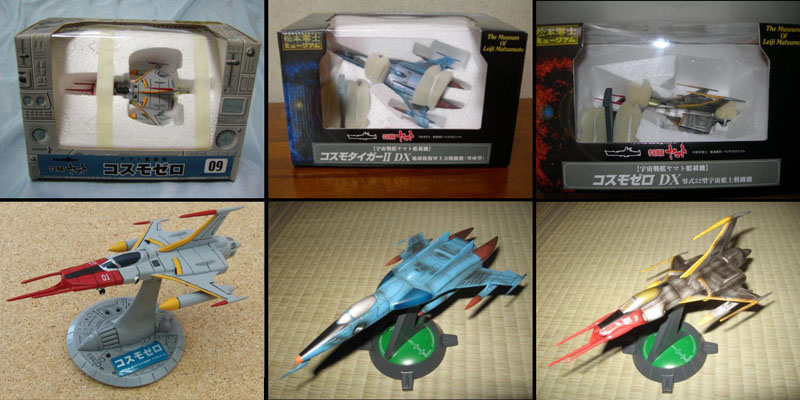 Last in the original lineup was No. 09, Kodai’s Cosmo Zero in March, 2000. Following this later in the year were newly-sculpted DX (Deluxe) versions of the Zero and the Tiger II with “battle damage” paint jobs. 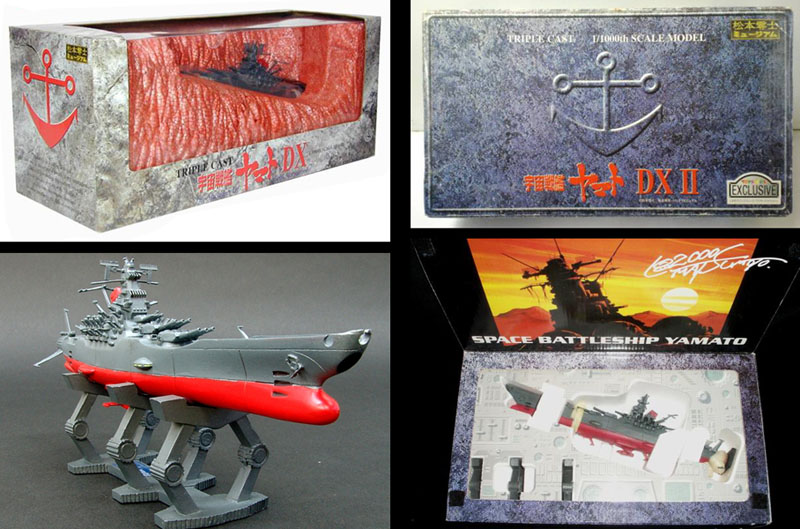 The DX line had actually gotten an earlier start when the 10″ Triple Cast Yamato DX (above left) appeared in November 1999. Twice as long and much heavier than Mimuko’s earlier Yamato, it was a near-exact replica of Bandai’s 1/1000 scale model kit from 1983. It was followed a month later by the Triple Cast DX II (right), repackaged in a new box for Japanese Toys ‘R’ Us stores. 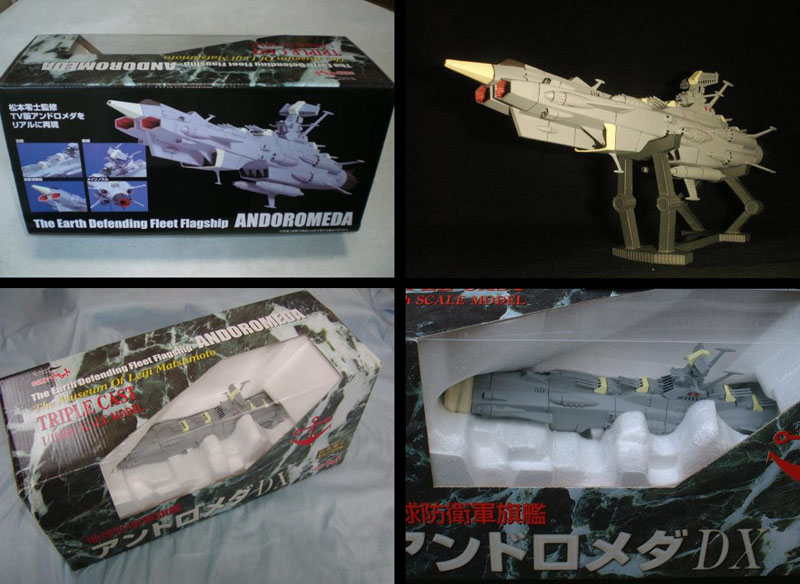 The final ship in the Mimuko line was the striking Andromeda, a completely new 1/1000 scale sculpt and another Toys ‘R’ Us exclusive.

Mimuko had set the standard high with this new line of ships, and the prominent use of Leiji Matsumoto’s name helped cement the fact that the Yamato franchise was under new management. The coming years would see a long-awaited renaissance of toys and other products. To the relief of starving Yamato fans everywhere, the long drought was officially over.

Special thanks to Yamato superfan Steve Harrison for aid and assistance. 3 thoughts on “Mimuko Toys: The End of the Drought”