Given the modest size of most Japanese homes, it should surprise no one that miniature toys and figures have long been a mainstay in the collections of Japanese children. It’s a trend that finds its fullest expression today in “Gashopon” figures, a generic name for tiny (and sometimes not-so-tiny) vending machine toys. (“Gashopon” is a made-up word that is meant to imitate the sound of such a machine in operation.) Another general term for miniatures is “candy toys,” since they were often found packaged with some form of confectionary in grocery or department stores. This practice is becoming less common as the years go by, so that now very few candy toys bother with the candy any more. Here are four different sets of
Yamato miniatures to compare and contrast:

“Mascot Figures” is another catchall term, meant to describe something that can be attached to a keychain, purse, cell phone, etc. and carried along on your daily route–what we usually refer to as a “Keyfob” in the US. These Yamato mascots were released by Sunkus, a widespread Japanese convenience store chain. It was a set of nine, which included Yamato, Kodai (Wildstar), Yuki (Nova), Shima (Venture), Captain Okita (Avatar), Mamoru Kodai (Alex Wildstar), Dessler (Desslok), a Cosmo Zero, and a Black Tiger. To get some extra mileage out of this set, Sunkus produced a painted version of each along with several unpainted versions in metallic plastic. Pictorial evidence indicates that these figures were released as part of a soft drink promotion.

Banpresto, a subsidiary of Bandai, was actually the first company to release Yamato keychains, beating Sunkus to the punch by four years. You can find their set here. 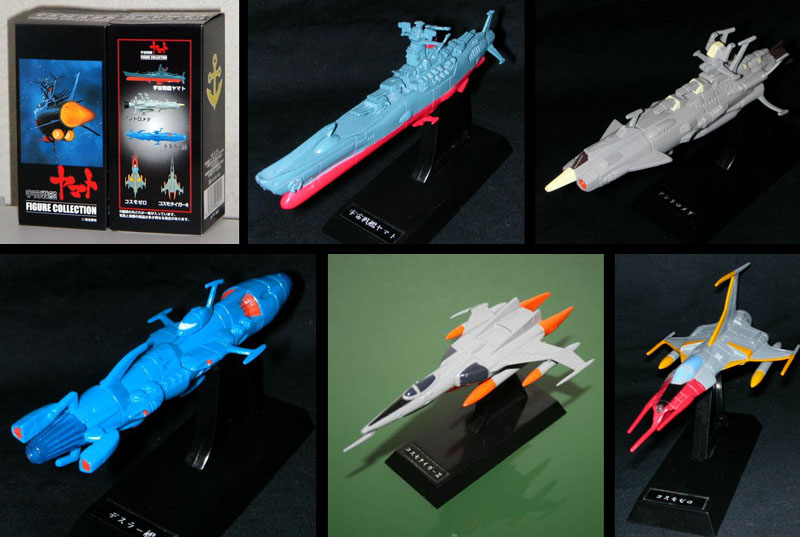 A year after the Sunkus set, toy and novelty manufacturer Nubel rolled out this set of five candy toys (sans candy) which were slightly larger and definitely easier on the eyes. This set included Yamato, Andromeda, Dessler’s battleship, a Cosmo Zero and a Cosmo Tiger II. 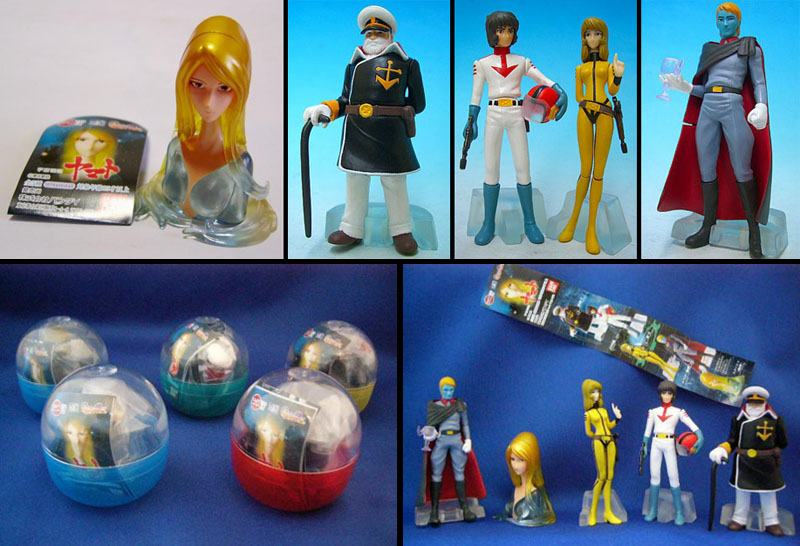 The ubiquitous 7-Eleven convenience store chain (which began its life in Japan before spreading, mosslike, around the globe) released this creative mix of figures and spaceships a variety of poses. Shown above and below, the set included Dessler on his throne with a steaming cup of ecto-gas, Kodai and Yuki as seen at the end of Farewell to Yamato, Sasha (from Be Forever) taking her final shot, Analyzer (IQ-9) with poseable cha-cha arms, the red Gamilon attack carrier with drill missile ship, Yamato rising from the sea, Yamato in flight, Yamato in battle, a Cosmo Tiger II launching its missiles, and Andromeda firing its shock cannons. As with most mass-produced miniatures, it was not uncommon for hot-press parts to warp in their packaging, which lead to many a droopy energy beam. But as fans have come to learn over the years, that’s just part of the charm.

This entry into the world of Yamato miniature mascots popped up quite unexpectedly. Run’A licensed the iconic Kewpie design by American artist Rose O’Neill and has applied it to many popular characters such as Ultraman, Kamen Rider, and more. Kodai looks amused on his packaging, but Captain Okita seems somewhat stunned. But as strange a combo as this may be, it wasn’t the first time for these two. A mysterious pair of super-deformed “gummy” figures (shown below) was released at an unknown time by an unknown manufacturer, and may in fact be bootlegged gashopons, along with another painted figure of Kodai. Just another of the many surprises lying in wait for the dedicated Yamato collector.