Just before the first Blu-ray and DVD release! An interview with Yamato 2202 Director Nobuyoshi Habara

Space Battleship Yamato 2202 takes on the challenge of building a new story with Farewell to Yamato, Soldiers of Love as its motif. Finally, the Blu-ray and DVD release begins! We interviewed Director Nobuyoshi Habara, who overflows with Yamato love. What does he have to say about the process of lines and casting?

Above all, Yamato‘s appeal is love and romance (Laughs)

Interviewer: After participating in various Yamato works in the past, what were your feelings about taking over as director this time? 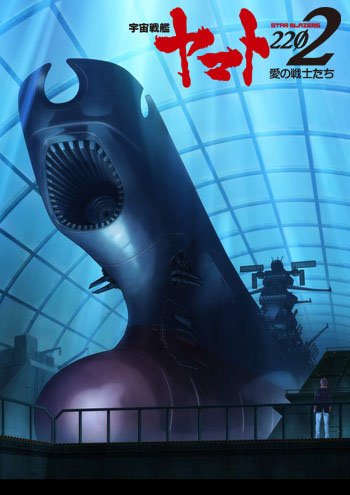 Habara: In the past, I was the mechanic director on Yamato Resurrection and worked as the animation director on the Director’s Cut version, then I was in charge of direction Episodes 9 and 19 for 2199. I had some anxiety about whether I was really fit to be a Yamato director, but in the end it’s my favorite work and my feeling was that I wanted to meet the challenge with all my strength. But I’m not able to describe the pressure with words any more. (Laughs) Now I truly understand how serious it was for Yutaka Izubuchi (the supervising director of Yamato 2199).

Interviewer: What do you believe is the appeal of Space Battleship Yamato?

Habara: First of all, it’s the ensemble drama part. I think one of the greatest charms is that the characters in the world of Yamato really feel alive. Above all, it’s love and romance. (Laughs) As the supervising director, I don’t want to forget that.

Because it is an important work for me, I always worry about how to build 2202

Interviewer: This is a modern version of the big hit movie Farewell to Yamato. What are you particularly conscious of as the director?

Habara: When I saw Farewell in the theater, I was in my third year of junior high school, and I clearly remember that everyone in the theater was crying, including me. Because it is an important work for me, I always worry about how to build 2202. Basically, Mr. Fukui gives me a lot of new ideas, and the form is that I build the visuals based on that. However, from the beginning he said, “Let’s put in as many homage scenes as possible,” so I decided to take care with that. 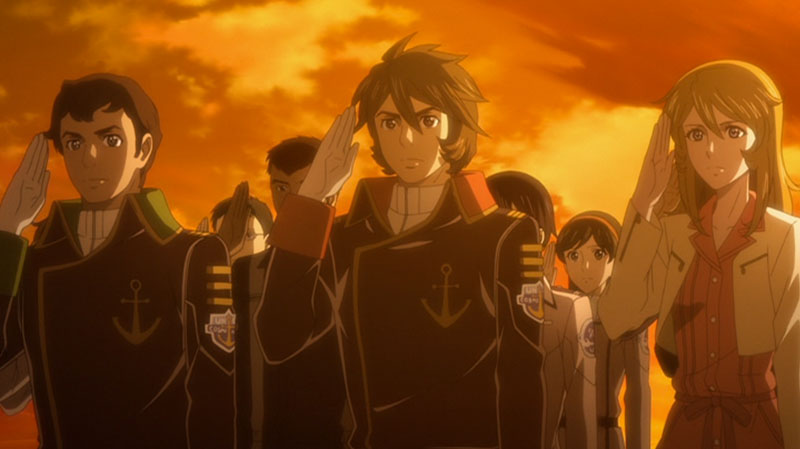 In Chapter 1, the Hero’s Hill scene in the second episode is almost the same as the original, though some situations are slightly different than in Farewell. Based on that difference, when Nanbu yells at Andromeda in 2202 he says “Bakiyaro!” but in Farewell he said “Bakayaro!” It’s a small difference, but because the situation this time is worse than in Farewell, the tone in “Bakiyaro” has a little more nuance than “Bakayaro” so we changed it to that.

Among other things, in the first TV series Yamato‘s activation scene is in Episode 2, and Captain Okita has the line, “Heavy power supply, contact.” I don’t know what that line means, but since you hear that line upon startup, it’s part of the soul of Yamato. So I just used it as is. (Laughs)

Interviewer: What parts are there “here” that are definitely different in this work than they were in Farewell?

Habara: This is a sequel to 2199, so we have a peace treaty with Garmillas. Garmillas air car technology has been introduced. The car Kodai and Yuki ride in is an air car. In this society, Earth people and Garmillans live together, which is very different. By the way, there are four Garmillans in the command center who are so-called “observers.” (Laughs) Meanwhile, new characters who appear are Ambassador Varel and Keyman, both of whom are Garmillans. How they associate with the Yamato crew will become a highlight in the future. 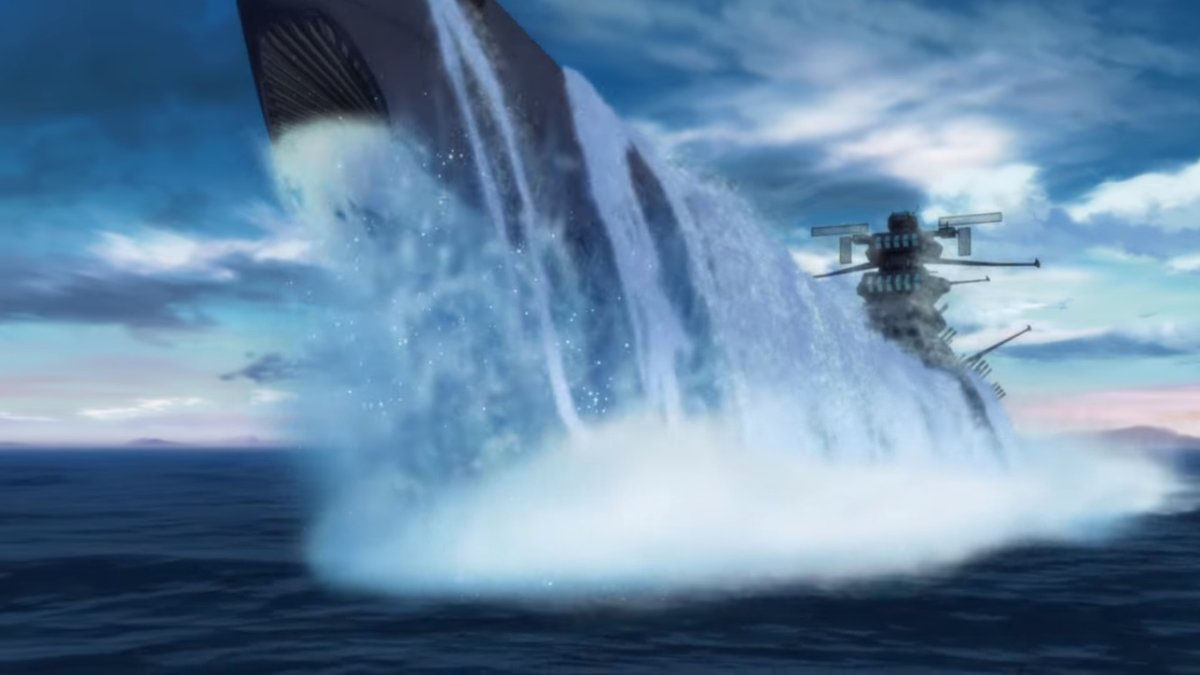 How to organize the “My Yamato” of each individual crew member

Interviewer: When production started, what was the hardest part for you as the director?

Habara: Each member of the production team has their own “My Yamato,” and organizing all of that is very hard. (Laughs) Rather than “Follow me,” my directing style is to get everyone’s opinion. “That’s good.” “That’s also good.” And then spin them into shape. In that sense, part of that is easy, but it’s difficult at the same time.

Interviewer: Does Mr. Fukui join in?

Habara: Mr. Fukui has too many ideas. (Laughs) The scripts are incredibly dense. I’ve written a lot, but nothing on that scale. (Laughs) There are places that have to be cut and never finished, so I hope you will check out the Episode 1 script that comes with the limited-edition Blu-ray. Please enjoy the shots that I cried over.

The first time I read the script, I could only hear Mr. Kamiya’s voice

Interviewer: Hiroshi Kamiya’s appointment in the role of Keyman and Sayaka Kanda’s appointment as Teresa became a big topic. Please tell me about the process and intentions of that casting.

Habara: As for Keyman, the first time I read the script, I could only hear Mr. Kamiya’s voice. It had to be Mr. Kamiya, including the appearance of the character. (Laughs) Daisuke Ono in the role of Kodai will meet his match from now on, and the balance of both their voices is very good. There was a voice recording today, and there was a line from Keyman that fit tightly into place.

When I was worried about casting Teresa, the sound director [Tomohiro] Yoshida said, “How about Ms. Kanda?” At that moment I said, “Please offer it to her by all means!” When I saw Frozen, I felt that the clarity of her voice was perfect for Teresa. It was really good that Ms. Kanda could accept.

Interviewer: What was it like to watch Mr. Kamiya and Ms. Kanda recording?

Habara: It was more wonderful than I had imagined. Mr. Kamiya fit the image he read in the script, and Ms. Kanda gave the impression of shining divinely in the studio.

Interviewer: Ms. Kanda told me about the difficulty of balance while playing a role that isn’t a normal human being. How was her performance?

Habara: In the first test, it was real human acting and it was very good on its own, but when I said, “This time, I’d like to feel closer to God,” and the finished version changed completely. I really got the impression of a wide performance. 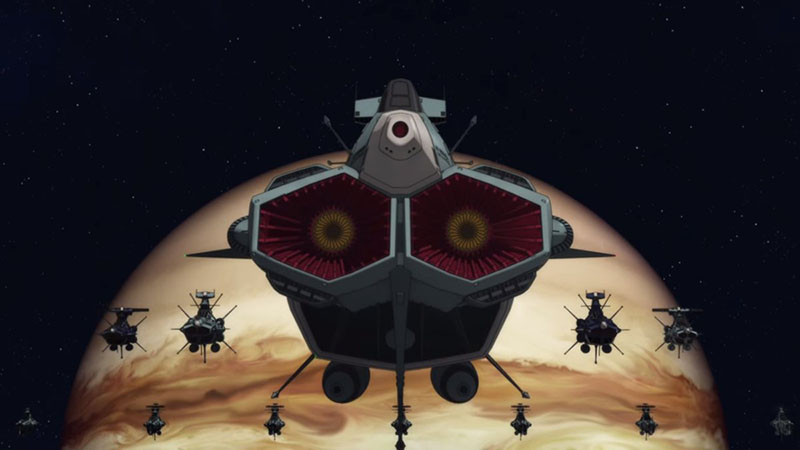 Andromeda is depicted as a symbol of the straying Earth

Interviewer: In Chapter 1, I was impressed by this sentence: “With the future of Earth heading toward strengthening the military, is this truly peace?” It’s a grand and important theme, but how conscious are you of the balance of entertainment in animation?

Habara: In the ending of 2199, I think sealing up the Wave-Motion Gun had a very significant meaning. The part about what happens in a world where that’s overturned has been properly written by Mr. Fukui, and it’s very convincing to me. I think this will be something new. On the visual side, since Assistant Director Makoto Kobayashi turns out one great image board after another, I do not worry.

Interviewer: The latest battleship Andromeda appears in this work. What does this battleship symbolize?

Habara: Yamato‘s crew knows that the Wave-Motion Gun is very dangerous and also know the process that sealed it up. They agreed to seal the Wave-Motion Gun. Earth was supposed to be headed for peace, but now Andromeda appears with two Wave-Motion Guns. And this time the aircraft carrier type appears, assembling a formation of five Andromedas. It plays a heavier role than we saw in Farewell and Yamato 2. It’s depicted as a symbol of Earth, which mistakenly strays from achieving peace. I have a strong feeling for the fans to see themselves in the same position as Yamato‘s crew. 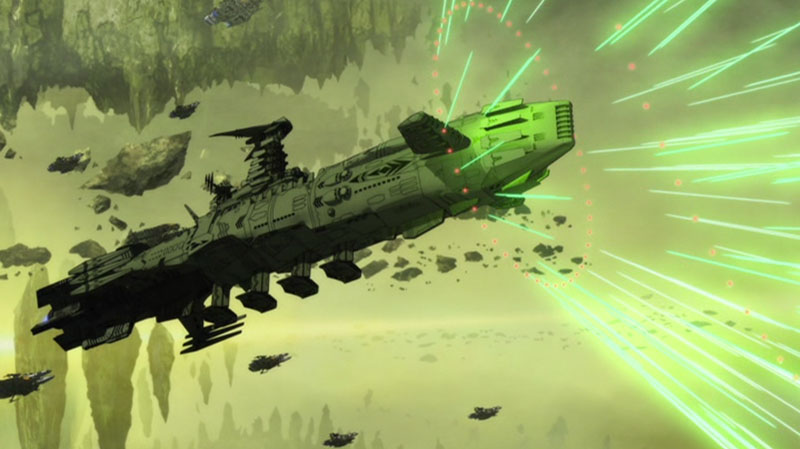 Interviewer: Chapter 1 had powerful full-scale development, starting with a battle scene. What was the work like?

Habara: The 3DCG team worked very hard, and I think it surprised everyone who saw it. When you study it carefully, the color of the large battleship is not all a single green. We increased its presence on screen by making fine adjustments, such as thinning and thickening it from point to point. The Cosmo Tiger II fighter appears after that, and we’re making two kinds of 3DCG model. One is the same shape as the plastic model, and the other is called the “Version K,” which reproduces the feeling of the super animator Yoshinori Kanada, who drew it with the wings and nose pointed down. In order to get as much action as we can, we take the challenge of expressions that are assumed to be difficult in 3DCG. This will come out in the future, so definitely pay close attention. 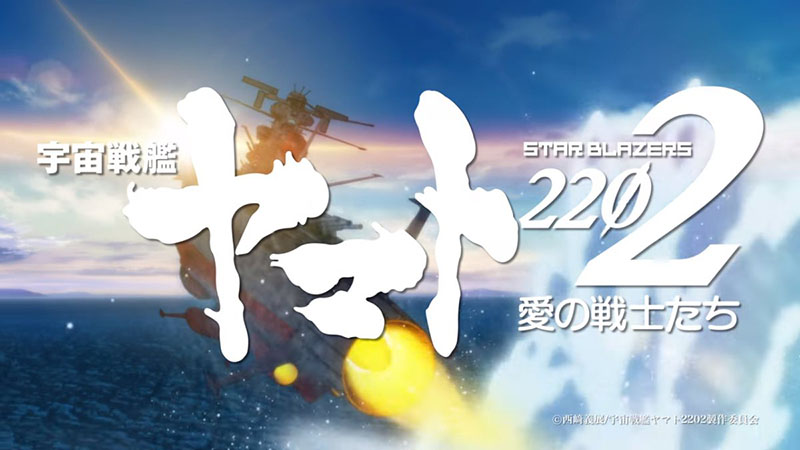 From Mr. Fukui’s preparation, a strong feeling that “What is love?” will be depicted head on

Interviewer: Another aspect of this project is that it’s difficult to disseminate a work about “love” as a theme for the present day even though it’s universal. What do you think of this?

Habara: The title of Mr. Fukui’s original plan book was already Space Battleship Yamato 2202, Soldiers of Love. First, though Yamato fans know the setting of Farewell was the year 2201, there was some doubt about why this would be in 2202. But when I saw the logo, the last 2 was the biggest and it looked like Yamato 2, so I said, “I see.” To be honest, I wondered whether Soldiers of Love would be suitable for today, but Mr. Fukui was resolute about daring to use an old-fashioned title, and I got the strong feeling through the Yamato crew that “What is love?” would be depicted head on, so I thought, “There’s no choice but to do this.” 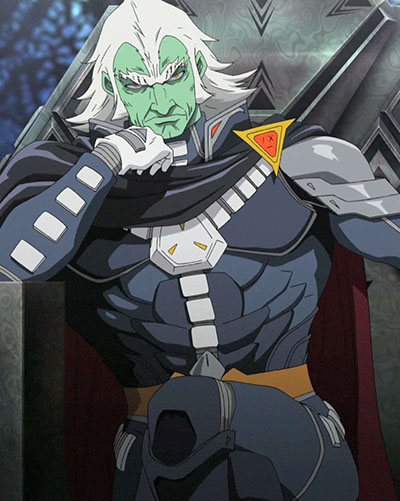 Interviewer: Please tell me about the scene in Chapter 1 where Zordar talks about love.

Habara: As a Yamato fan, I always want the story to start with the narration, “The universe spreads out into infinity…” (Laughs) I personally think it actually went really well with the voice of Zordar. In addition, Hideaki Tezuka’s performance as Zordar is wonderful. It’s resonant at first, and then it has a good feeling when it gradually becomes Zordar.

Of course, the highlight of Chapter 2, Launch Chapter, is Yamato‘s launch scene

Interviewer: What is Space Battleship Yamato to you?

Habara: It’s part of what made me, isn’t it? I thought I would become an animator after I saw Mazinger Z, and a little later the broadcast of the first TV series began. In the original Yamato, there was a “bank shot” where it would fly forward out of the distance and come closer, then turn and fly off into the distance again. I’d watch that on TV and draw it in a flip-book, then check it against the next broadcast. “Oh, I got the number of pulse lasers wrong, I’ll draw it again.” I drew it many times like that. Since I was drawing Yamato in a flip-book, it was the work that gave me my starting point as an animator. I am truly happy to be given the opportunity to be involved in such an important work. 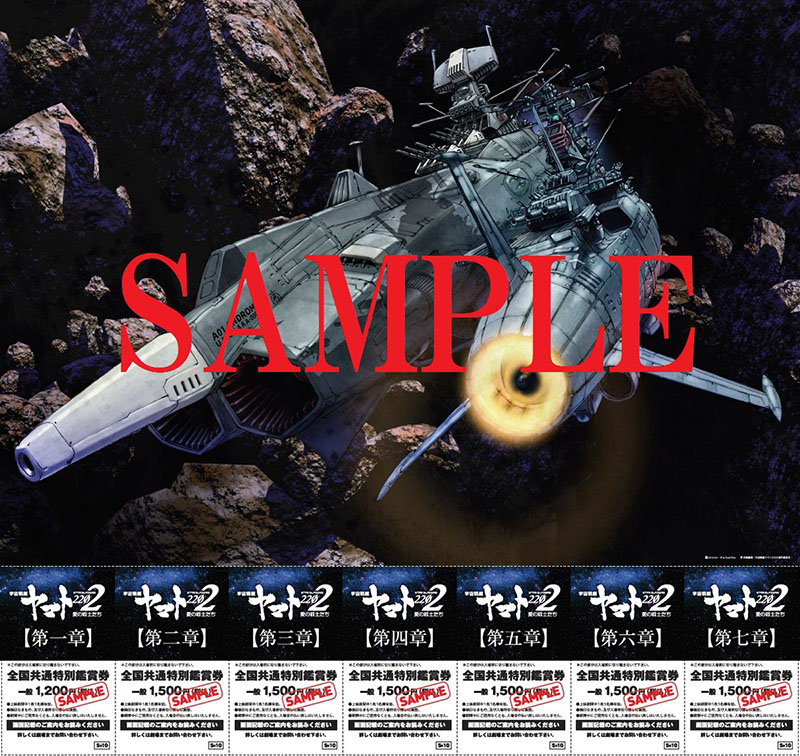 Interviewer: Finally, please tell us about the highlights that will appear in Chapter 2.

Habara: Of course, it’s Yamato‘s launch scene. Because it’s the scene I personally wanted to see the most, I’m fired up to make it. I want you to look forward to it by all means. Kia Asamiya painted the “near miss of Yamato and Andromeda” illustration for the set of 7 advance tickets. The scene originally came up in storyboards, and Mr. Asamiya’s illustration emerged just as the 3DCG for that scene was getting started, so the 3DCG team saw it and said “We’ll get it close to that.” Then they reproduced it from almost the same angle. It’s a cool-looking illustration that moves, so please look for it in the theater. 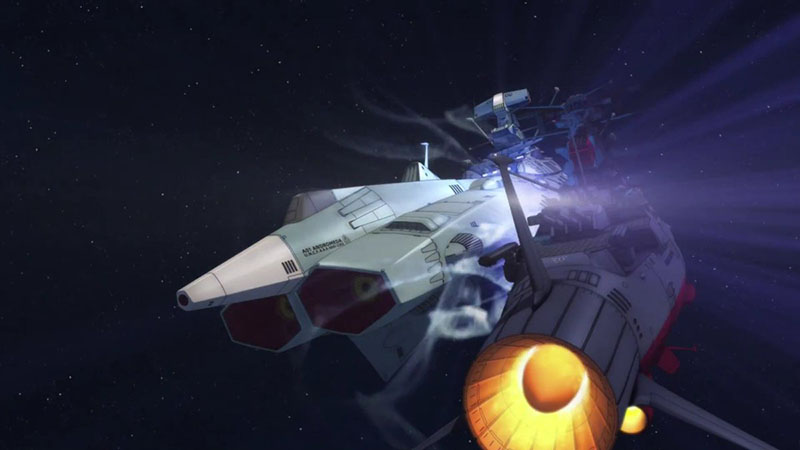