After the explosive month of June, July calmed down considerably as Chapter 2 ended its theatrical run and the production staff got back to the business of prepping Chapter 3 for October. It was mainly a month of media coverage punctuated by the video release of Chapter 2. Here’s how it all went down. 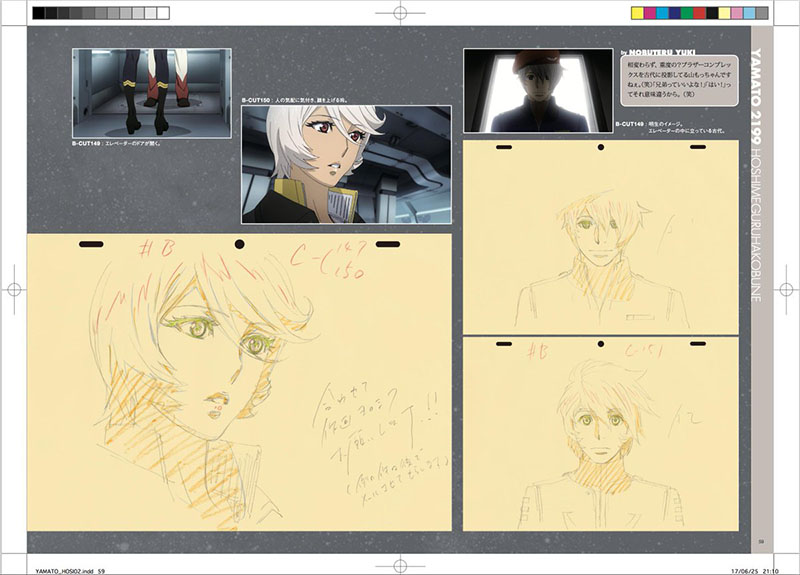 On this day, character designer Nobuteru Yuuki announced a new art book collecting his design and layout work from Ark of the Stars. He posted a few pages-in-progress on Twitter to let everyone know that this 160-page volume would debut August 12 at Comiket. As of this writing, there is no further information on availability, but if it follows the path of his previous character art book there will be other sources. 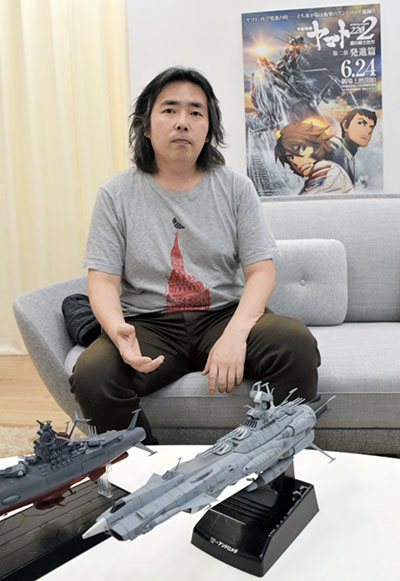 July began with the start of Chapter 2’s second week in theaters. Of the twenty that opened it a week earlier, eight would hold it over for an unprecedented third week. Media coverage continued, starting with this brief article on the Mainichi Newspaper’s website. (See the original post here.)

The keyword is “Kamikaze”

Space Battleship Yamato is one of the sources of anime that floods present-day Japan. On the other hand, novelist Harutoshi Fukui, who is now writing all seven chapters of Yamato 2202, said, “I was at a dead end in my role.”

Yamato became a big boom in the 1970s. Farewell to Yamato, released in 1978, became a record hit as an anime feature film with revenue of 2.1 billion yen. This work is a remake aimed at adults who were not able to follow Yamato‘s development afterward by reigniting the interest of those who drifted away. Mr. Fukui previously wrote stories with themes related to current events such as Another Country’s Aegis and put a new light on a popular anime with Mobile Suit Gundam UC.

Farewell depicted the death of Yamato‘s crew in a battle against the White Comet Empire. At the end, the main character crashes Yamato into the huge enemy battleship.

“When you hear about a ‘kamikaze’ attack now, you think of terrorist suicide bombings,” Fukui said. “On the other side, this threat to civilization is praised. In the wrong hands, love becomes a murder weapon. This wasn’t done in the original, but I want to show what happens when such a thing is done.”

In the parts released so far, it is unclear what the “enemy” is thinking, and it is difficult to communicate with terrorists. However, Mr. Fukui says, “In the end, the enemy will be depicted in a way that can be understood. I was fascinated by the prospect of divising this for the enemy side and depicting both the good and bad sides of love.”

Gojira was revived with the hit Shin Gojira last year. And now, Yamato.

“These two works are both about what makes a country fall. The first Yamato story (about fighting the mysterious planet Gamilas which invaded Earth) was Yamato‘s first masterpiece. Rather than celebrating when they annihilated the enemy, they realized ‘we were stupid.’ This could only be depicted by a country that was defeated in war.”

“Afterward, we only saw Gojira as a pro-wrestler kaiju, as the story of Yamato also wandered off-track and failed. What has changed since then is that we now experience the feeling that our country might perish. The 2011 Tohoku earthquake was Gojira, and Yamato is the contractor of trauma.”

Yamato 2202 Chapter 2 is currently screening in theaters for a limited time. 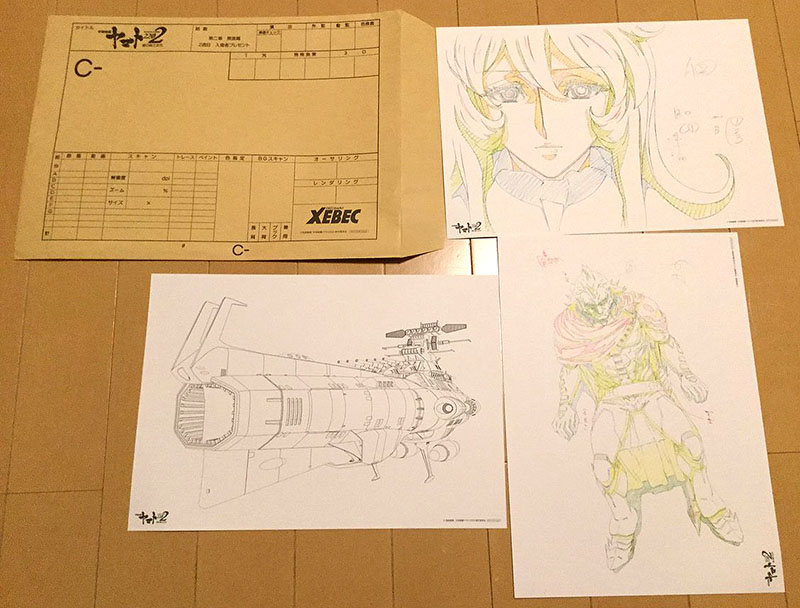 As with week 1, theaters had an incentive for fans to return for the start of week 2: a facsimile of an anime production envelope containing three art pieces (approx. 8×12″): animation layouts of Yuki and Zordar and a mecha sheet of the Dreadnought-class battleship.

Another kickoff for the second week was a new round of personal appearances by Writer Harutoshi Fukui, voice actor Eriko Nakamura, and MC Osamu Kobayashi, this time outside the familiar launch pad of Tokyo. 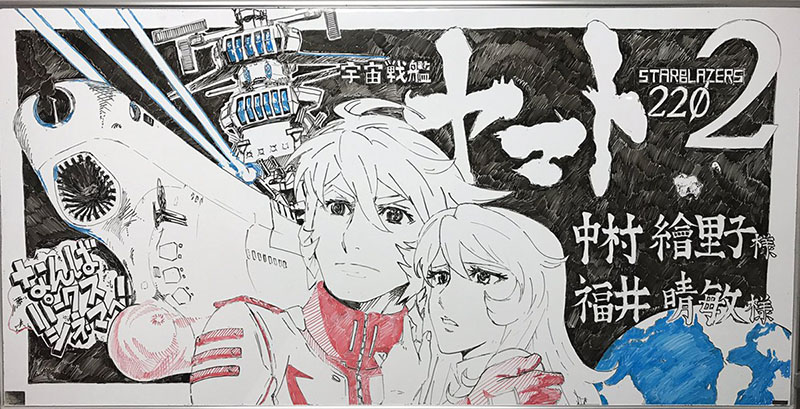 Saturday July 1 found them at two theaters in Aichi prefecture, and they followed up with two more on Sunday at Kyoto and Osaka. These photos were posted on Twitter by Nakamura and the Yamato Production Committee.

Yamato and Andromeda are the first releases in this new hyper-detailed 1/2000 miniature lineup from Bandai. Preorders opened this month, which meant more photos were published to show off their features: intricate painting and hull detail, optional parts for different configurations (such as Yamato‘s wings), internal lighting, and mirrored display stands.

See a gallery of images here.

On this day, Akiba Souken added another interview to the growing list of conversations with Harutoshi Fukui and Nobuyoshi Habara. Read it here. 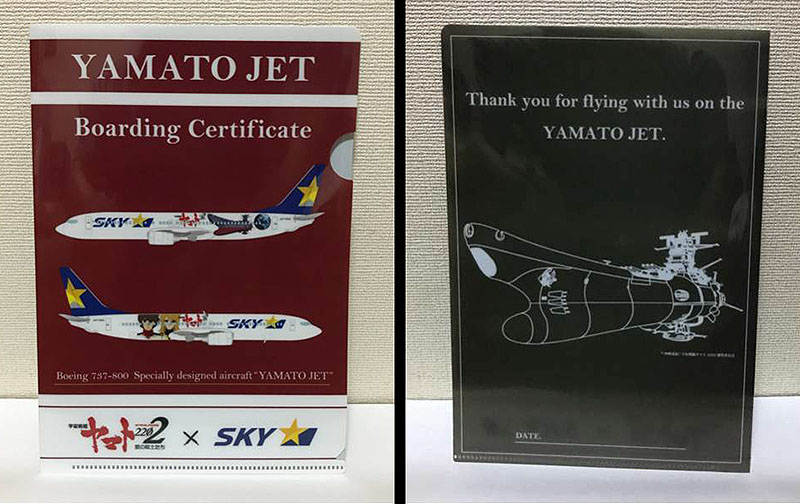 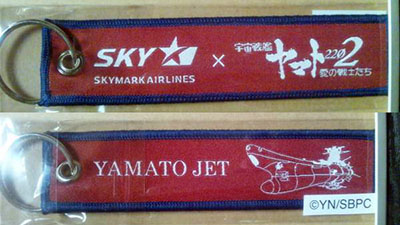 Skymark’s Yamato Jet slightly expanded its dedicated product line when a new clear file was released to passengers along with a Yamato 2202 luggage tag. At this rate, we may see new Jet products with every future theatrical release. 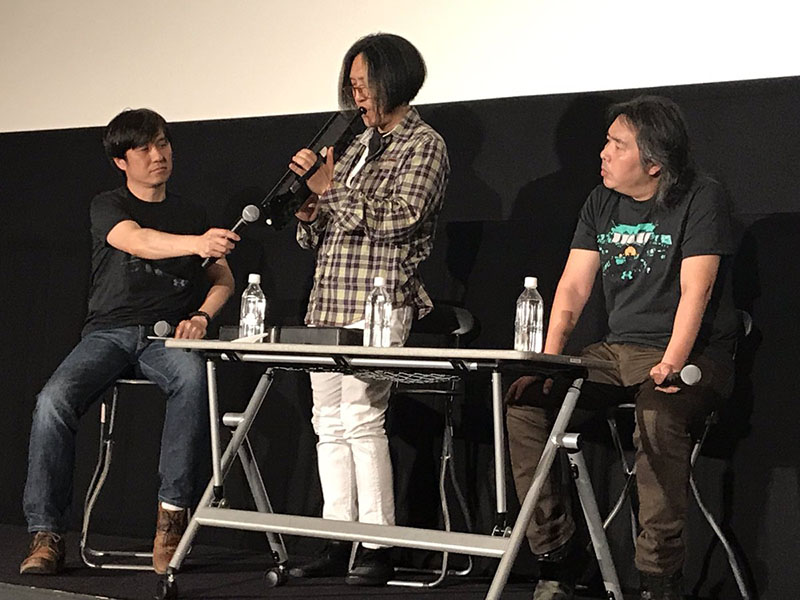 Composer Akira Miyagawa made his first live appearance under the Yamato 2202 banner when he joined Harutoshi Fukui and MC Osamu Kobayashi for an evening of conversation at the Shinjuku Piccadilly theater after a screening of Chapter 2. The content of their discussion has not been published online, but fans were overjoyed to hear his pianica rendition of Great Love. One fan on Twitter attested that it loosened the tear ducts. 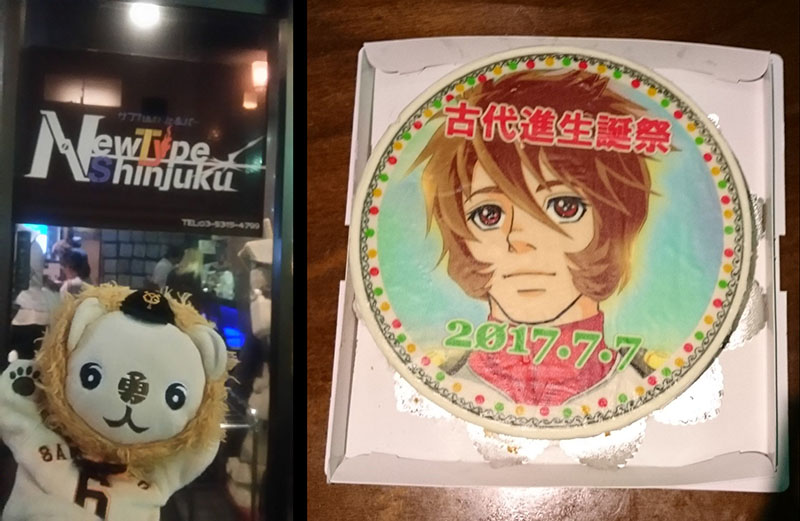 Fans marked the apocryphal birthday of Susumu Kodai in their own fashion today, mostly as fan art, but one particular Twitter user posted these photos from a mini-celebration at NewType Shinjuku restaurant in Tokyo (previously visited in Yamatour 2017).

See more in the fan art gallery at the end of this page. 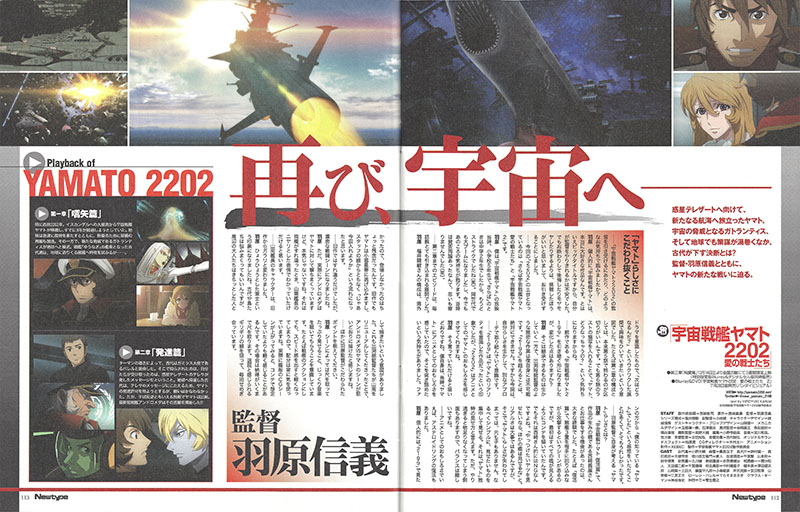 Newtype did its part to expand the vault of 2202 coverage with a six page article formed of two parts: an interview with Director Nobuyoshi Habara, and a three-page all-text side story spotlighting Shima. Read the interview here. The side story (and its predecessor in the March issue) will be considered for translation if they don’t turn up in a future publication. 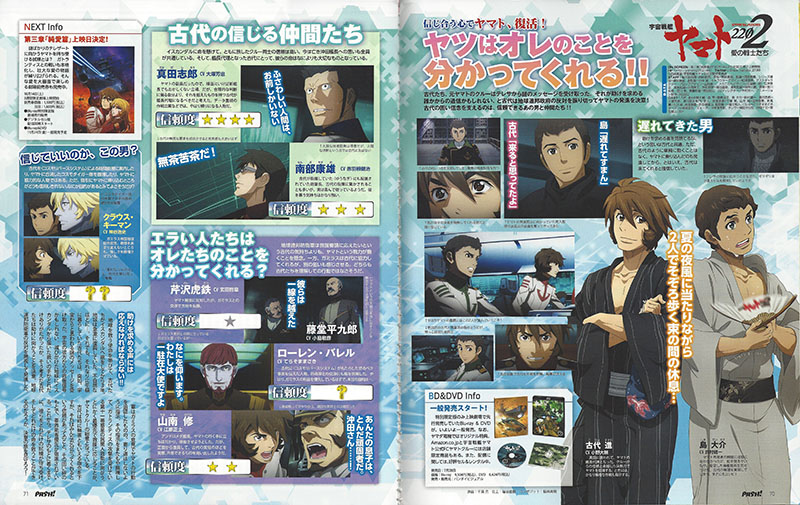 This magazine, devoted to male anime characters, gave 2202 a two-page article to follow up its last one, focusing on the guy-to-guy dynamics in the series. It also included a foldout poster of Kodai and Shima in traditional summer wear, which can be seen at the end of this page. 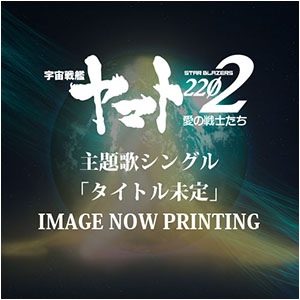 The first Yamato 2202 music release was announced on this day. It’s not much, but it’s a start – a CD single of Mirror of the Moon, sung by Sayaka Kanda as Teresa and performed by the Osaka Shion Wind Orchestra. Set for release from Lantis on October 11 (shortly before Chapter 3 arrives in theaters), it will set the stage for a long series of music products that should eventually rival the 2199 catalog.

This free promotional magazine from Bandai Visual featured a four-page 2202 article, two pages of which were devoted to another Fukui/Habara interview. An expanded version was published online on July 26. Read it here.

See the magazine from cover to cover here and see the online article here. 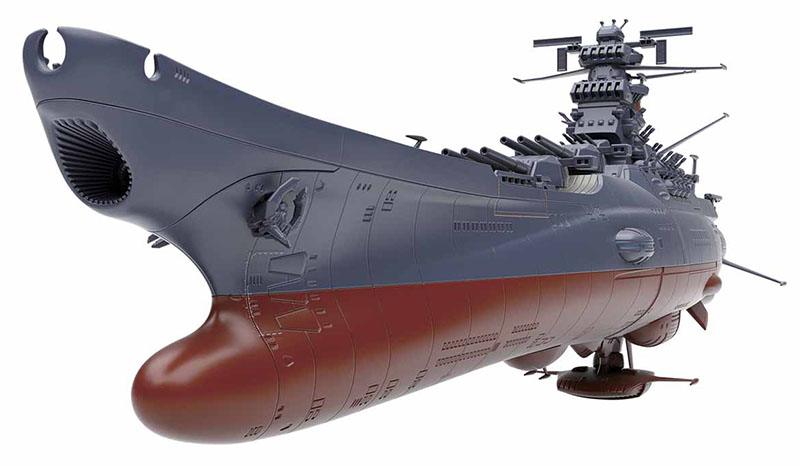 Following the reveal of a prototype model at the Shizuoka Hobby Show, Bandai officially announced it for October release, very likely on the same day as Chapter 3 (October 14). It will precisely match the new 2202 redesign with all the features we’ve come to expect (rotating turrets, optional wings, opening hatch) and an internal lighting kit that follows the precedent set by the 1/1000 Andromeda.

Also included are mini Cosmo Tigers and a Mecha Collection-size Yuunagi from Chapter 1. 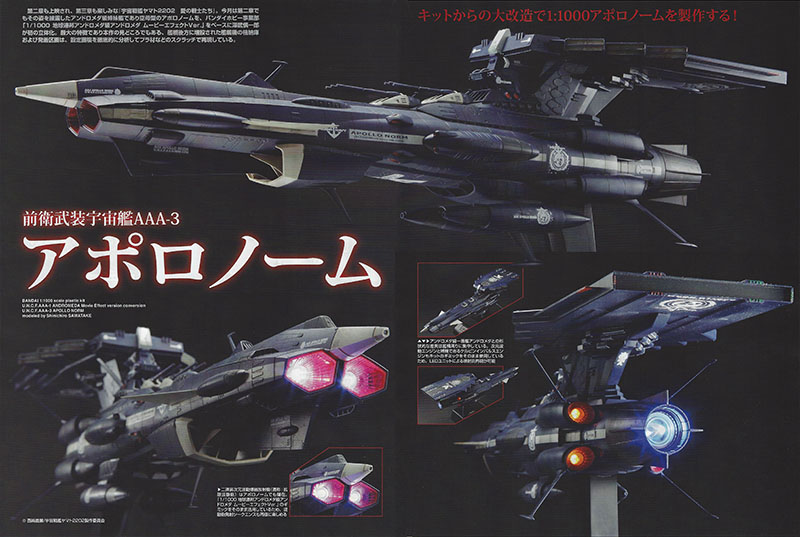 This issue contained a six-page article leading off with photos of a customized Andromeda model converted into the Apollo Norm carrier configuration. 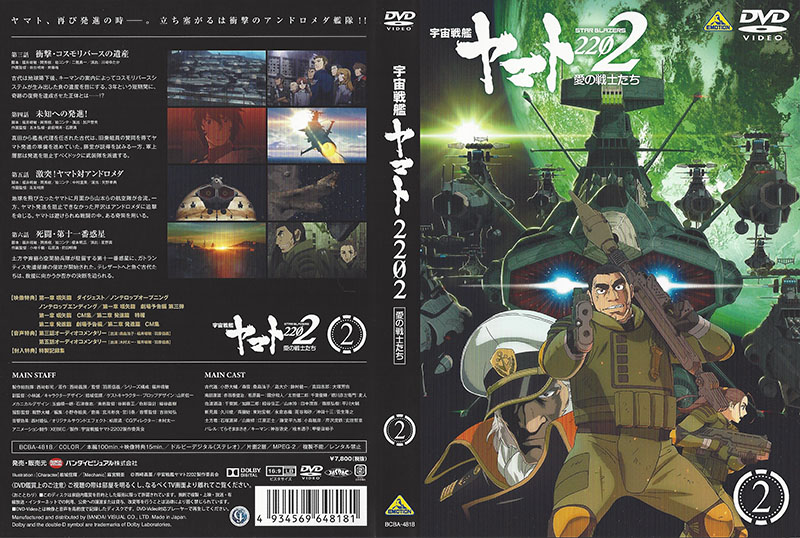 Launch Chapter reached the general public on this day on both Blu-ray and DVD. The release included the mini-booklet that was packaged with the theatrical edition.

Fans who purchased Chapter 2 from Amazon.co.jp got the second in a series of exclusive audio drama CDs written by Harutoshi Fukui. They are side stories played for laughs, following the escapades of Keyman and Varel (voiced by their respective anime actors) grappling with the bewildering culture of Earth. In this 18-minute episode titled Garmillas Ambassador, what are YOU doing on Earth? they visit the Yakitori Yamato restaurant, a cat-themed café, and an anime shop as they discuss how to approach the Yamato crew with secret intel. Original soundtrack music is also part of the mix. 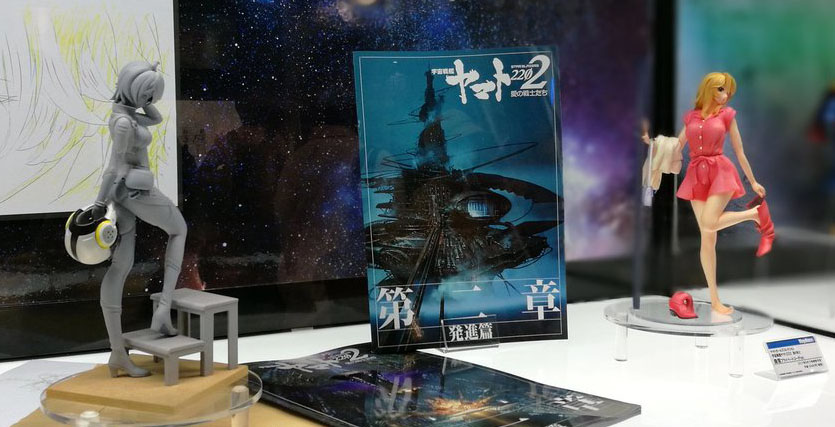 The 2017 Summer Wonder Festival in Tokyo had current and upcoming Yamato products on display from both Bandai and Megahouse, various garage kits, and one-of-a-kind custom fan models.

In addition to posting development art directly from his own PC, Makoto Kobayashi somehow stills finds the time to dabble in his own personal projects.

See a gallery of his latest works here.

As noted in recent reports, twin mobile-phone games are on the way for Japanese users. Yamato 2199: Last Hope 365 is a new take on the voyage to Iscandar while Yamato 2202: Hero’s Record explores new ground. Promotional art from both games was steadily released on Twitter in July.

The amount of fan art posted on Twitter in July was explosive, with everyone finding new material to interpret from the expanding 2202 universe.

Japanese cosplayers found themselves up against some formidable competition in July when a new contender emerged from the far distant country of America.

See a gallery from both sides of the ocean here. 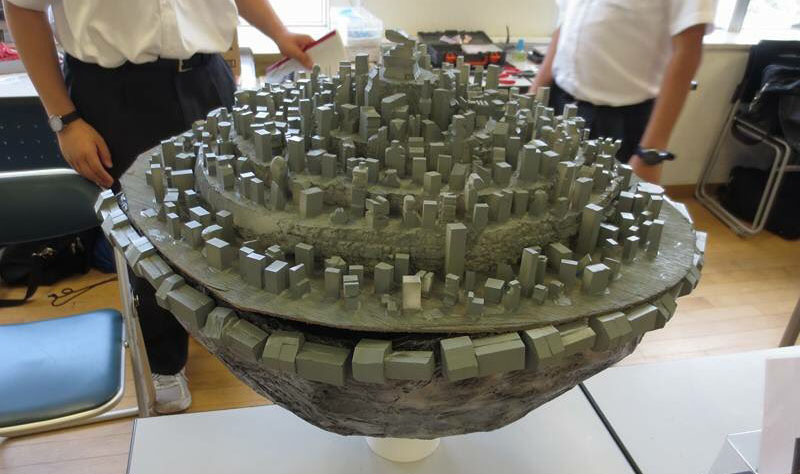 As new model kits emerged, customization options opened up for modelers in the Japanese fan community. And you just can’t argue with a tabletop Comet Empire. 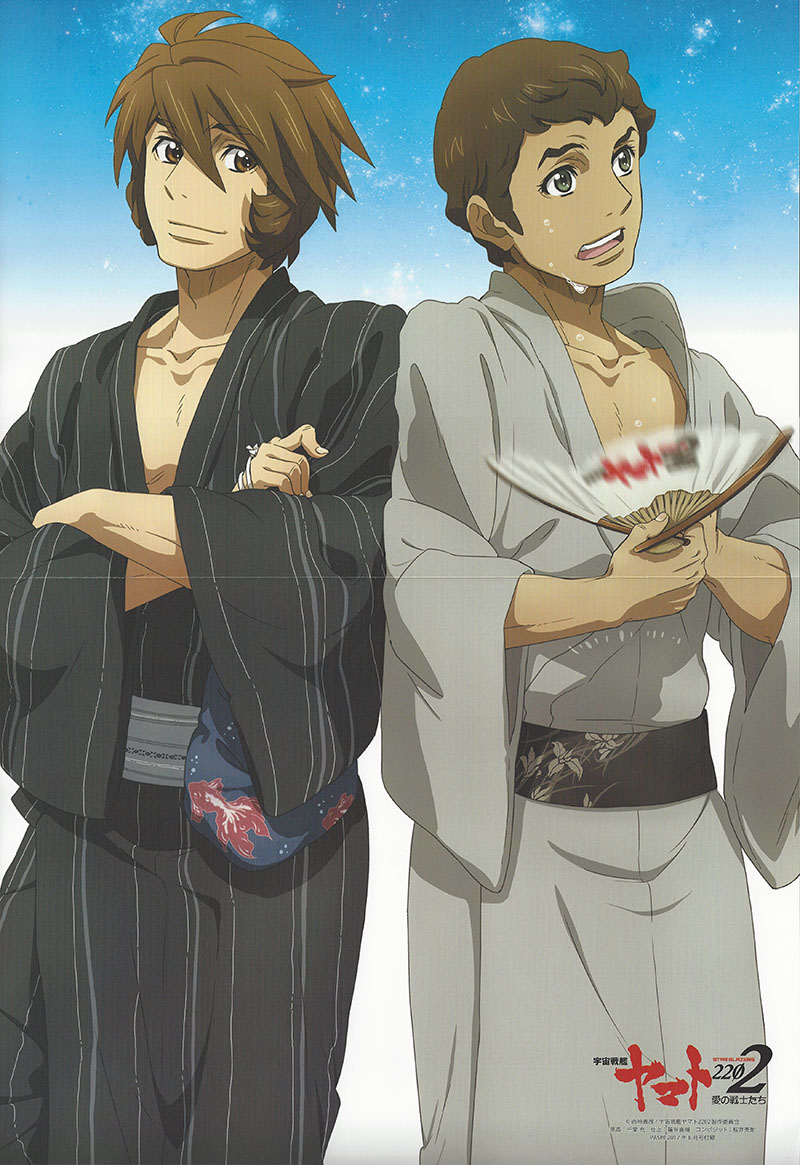