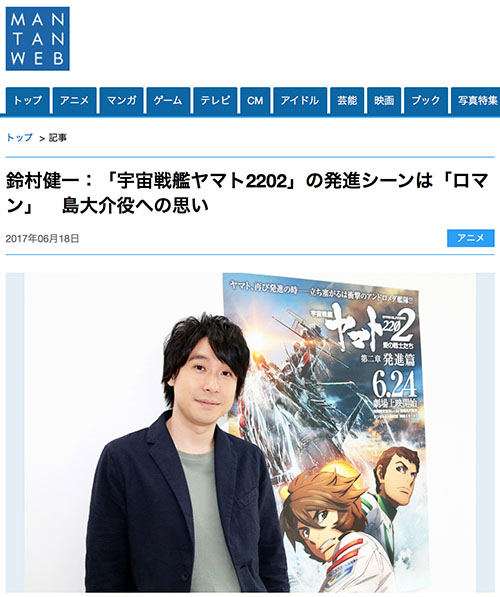 Chapter 2 (Launch Chapter), the latest part of the Yamato 2202 series, premieres in theaters June 24th. As per the title, Yamato launches in this chapter. Kenichi Suzumura, who plays the popular character Daisuke Shima, shared his thoughts on the work and behind the scenes of the voice recording.

Sympathy for the underdog

The motif for Yamato 2202 is Farewell to Yamato, which was released in 1978. A few years after Yamato returned from Iscandar, the emperor of Gatlantis rises to conquer space against the wishes of the goddess Teresa, who prays for peace…and Earth begins to walk the road of military buildup. Harutoshi Fukui writes the screenplay, Nobuyoshi Habara is the director, Daisuke Ono plays Susumu Kodai, and Houko Kuwashima plays Yuki Mori.

“I’m not of the Space Battleship Yamato generation,” says Suzumura. “I watched it in reruns. As a child, I felt the story was a bit difficult. I was absorbed in scenes of the launch and firing the Wave-Motion Gun.” 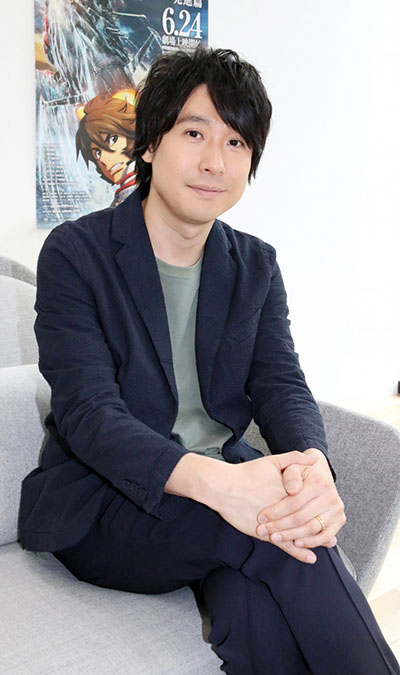 When it came time to audition, “I nearly fell over and said, ‘I want to do it!’ I was glad when Yutaka Izubuchi (general director of Yamato 2199) came in. No one in the industry knew who we’d be auditioning for on the staff. Mr. Izubuchi and I were drinking buddies in a tokusatsu [live action special effects] club, but we’d never worked together. I never told him ‘give me a job’ or anything like that.”

Mr. Suzumura auditioned for the Kodai role, but was instead cast as Daisuke Shima. “When it came to the voice recording, Ono’s Kodai was just right, and I thought I was good as Shima. He takes a far-sighted view and pushes things forward. The underdog place is good and easy for me to sympathize with at my age.”

Honoring “voice actors who did the original”

Daisuke Shima is an important character in Space Battleship Yamato along with the hero Susumu Kodai. He is also a popular character, and Mr. Suzumura had some pressure in playing him.

In addition to Shima, he has played many popular characters such as Iyami in Osomatsu-san and the lead role in Locke the Superman: Mirror Ring. (See a full credit list for Mr. Suzumura here.)

Smiling, he says, “Am I conscious of being a voice actor who does so many remakes? (Laughs) That’s not it. When I go drinking with others who act in remakes, I say ‘Is our acting old?’ (Laughs) But it’s an honor to be part of the history.” 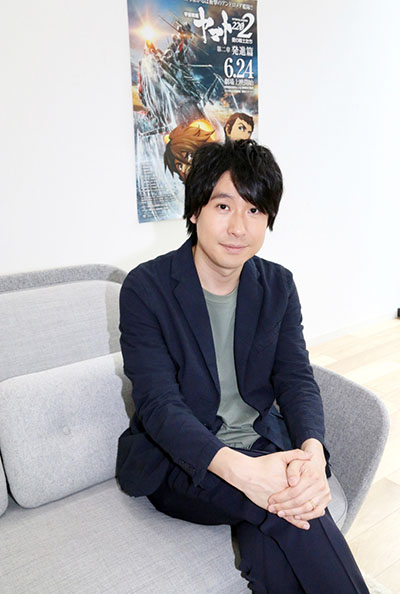 Tension in the voice recording for the launch scene

As per the title Launch Chapter, the highlight of Yamato 2202 Chapter 2 will be the launch scene.

“The launch scene of Yamato is special, isn’t it? I’ve watched the launch scene of 2199 on Blu-ray many times. No matter how many times I see it, I always get goosebumps. Last time our trip started with the people’s wishes, but it’s reversed this time. This is a bundle of roman[ce].”

About the launch scene in 2199, he says, “The tension of the voice actors rose for the launch sequence. But the staff said, ‘please don’t raise the tension too high.’ Shima holds the fate of Earth, but he’s also a pro. A pro isn’t supposed to be rushed. I thought a lot about the takeoff scene, which is why I felt tense. Even when we were in a great pinch, I tried to be conscious that Shima would not be impatient.”

Also, there were other hardships.

“It’s slightly different from a robot thing, isn’t it? Each character has their share of responsibility in launch and battle scenes, and there is a feeling of strain. Sometimes battle scenes are tiring. (Laughs) There are many difficult words.”

Speaking of Chapter 2’s highlights, Suzumura talked about the launch scene and his concerns for future developments. “This launch scene is tense, so it might be interesting to compare it with the previous one. Also, it depicts the relationship of trust between Shima and the crew. I’m looking forward to seeing how the relationship with Gatlantis will be depicted.