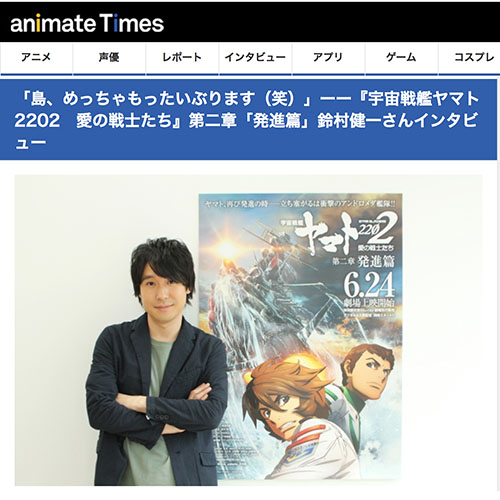 “Shima is quite pretentious.” (Laughs)

Yamato 2202 Chapter 2 will be screened in 20 theaters nationwide from Saturday, June 24. As the story progresses, the time for Yamato‘s crew to make a decision has come. What decisions will the crew make, including Susumu Kodai, and what kind of voyage will they take? Attention is gathering.

This time we spoke with Kenichi Suzumura who plays Daisuke Shima, the best friend to the main character Susumu Kodai, and the navigator who experienced the trip to Iscandar with him in the previous work, about the attractions of Chapter 2 and the appeal of this work. Mr. Suzumura seemed to speak from Shima’s point of view.

I stop Kodai because I’m his best friend!

Interviewer: Launch Chapter is indeed the story in which Yamato takes off, but Shima has a problem. What happens after his long-awaited reunion with Kodai in the first chapter, and where do things end up in Chapter 2?

Suzumura: I get on board Yamato. But just how I get on has some seasoning to it, so I want you to actually watch it in that area. Well, I’m relieved to be on board, because there was also a theory that I wouldn’t be.

Interviewer: When you met Kodai in Chapter 1 after a long absence it was all good, but it didn’t look as good in the scenes that came later on…

Suzumura: That’s right. Still, in terms of what you think, perhaps Shima is the more normal, or perhaps the more Yamato-like. He happened to receive the “help me” communication by chance and now the ship is flying off only on the basis of that message. It’s obvious that Shima will try to stop that, because it’s absurd. (Laughs) It’s realistic for Shima to firmly stop Kodai with, “Don’t forget about Yuki.” It’s also said that Shima represents the viewers, and I think it would be strange if no one tried to stop it.

Those who saw 2199 would think it’s more than enough reason for Yamato to leave. The last time Earth was about to be ruined, Yamato‘s launch was based only on an “I’m going to help you” message. If the same thing happened again, it would be impossible not to go. If I was in Yamato‘s crew, I would well understand the feeling of “Let’s go!” But in a general sense, I think it would be commonplace for someone else to say, “Don’t go there, let’s stop it.”

Interviewer: Even though Kodai and Shima are said to be best friends, right?

Suzumura: I think the big part about stopping him is because they are close friends. If a friend said, “I’m going to quit the company and start my own,” most people would say, “Do your best and good luck,” but I have a feeling there’d be some person who’d say “Don’t do it!” and be very hot to stop you from messing up your life. A friend who would step in and try to stop Kodai is really thinking about him, and Shima properly says that it isn’t necessarily a good thing to go flying off. As far as I can see, he’s a very good friend.

Keyman has many mysteries and Saito is deeply passionate

Interviewer: How would you judge the atmosphere at the recording studio for Chapter 2? Did you get the feeling that everyone stepped up their performance compared to Chapter 1?

Suzumura: There hasn’t been much going on in the time since 2199, so it’s strange that the recording has been going so smoothly. It has a natural feeling, like it’s been connected all this time. It’s like the story, isn’t it? The feeling of Chapter 1 is that they all gathered after a long absence and reveled in it. It’s been a long time, but it has the feeling that everyone gathered and returned to their usual selves. From my perspective, the recording site was like that.

Interviewer: There are new characters in 2202.

Suzumura: The most conspicuous character to come in is Keyman, and I think it’s really interesting how no one knows what to make of him. Is he friend or foe? I don’t know if I can trust him or not. Nobody on the Yamato crew knows. Not even the actors. We haven’t been told who Keyman is. It has a certain atmosphere of being handled with great care. I think it’s fascinating. Hiroshi Kamiya knows, but if I ask, “There’s something about Keyman, right?” all I get back is, “Yes, there’s something about Keyman.” (Laughs) I thought it would be better not to ask any more, so I haven’t heard any more.

Interviewer: In Chapter 2, I got a different impression of Keyman than in Chapter 1.

Suzumura: It feels mysterious, doesn’t it? What kind of person is this? He’s wrapped up in smoke again, but I don’t think it would be like that if he was just a bad person. Though he’d open up more if he were a truly good person, and this doesn’t seem to be the case either. It’s a very interesting place, isn’t it?

Interviewer: Other than this, are there any other new characters you care about?

Suzumura: Saito, of course. You can’t help liking the original Saito in Farewell to Yamato. (Laughs) That “I’m Saito, it’s a pleasure!” sort of thing. (Laughs) Seen the other way, there’s an aspect of “Why the hell are you all of a sudden acting like a main character?” He’s a good character, but because of the way he’s introduced, there’s this aspect of him that you can’t quite figure out. If you held a gun to my head, I’d say he feels like he disturbs the setting. However, 2202 depicts it carefully and thoroughly. From the time he appeared, he’s had a very manly spirit and a deeply passionate humanity. That’s the philosophy being depicted, and that part will be firmly presented in the future. This person will play an active part. After all, he’s on the poster. (Laughs) 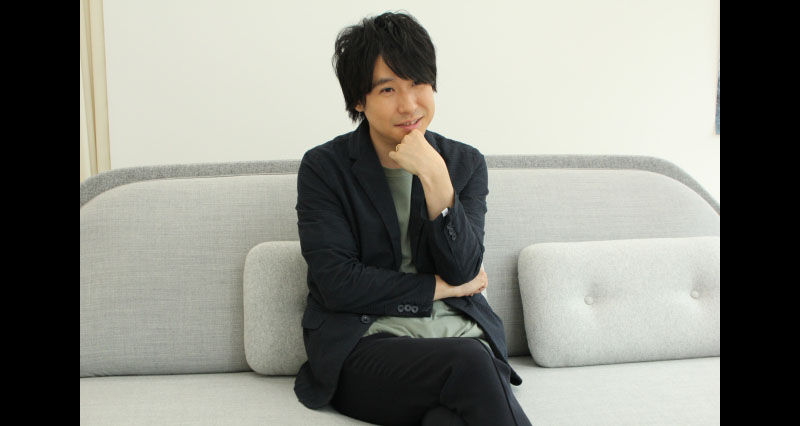 The highlights of Chapter 2 from the trailer

Interviewer: The trailer for Chapter 2 has already been delivered, but I was surprised to see so many shots that were not in the original, and it was really exciting.

Suzumura: That’s right. Everyone who knows the original says something like, “Hey! What’s going on!?”

Suzumura: She tells him, “Go back to Yamato.”

Interviewer: I thought, “Eh!?” about that. After seeing their status in Chapter 1, it was a bit surprising.

Suzumura: Definitely. Kato didn’t seem like he would go flying off. But in the original he comes in and says “Hey, open the hatch!” and then “It’s Kato! Kato’s back!” (Laughs) We focus in on that moment, but in 2202 there’s the drama of how he gets there. And because of that, when Kato comes aboard and they say “Kato’s back!” I think the joy is ten times greater than before.

Interviewer: It’s natural for someone who liked 2199, but it’s very enjoyable for those who only saw the original.

Suzumura: Yes, it’s fascinating. Even those who don’t know it at all can see it as a proper ensemble drama, and that’s a great thing. You can see a high degree of completeness from the past. However, now the times are different. In that era, as I said before, everyone just accepts it when Kato suddenly shows up saying “What’s up?” and everyone happily responds with “Kato’s back!” Therefore, when there’s a part missing you supplement it back in yourself and ask, “What happened to Kato?” This time, the backstory drama of that lends it meaning. By depicting it a little more carefully, you succeed in increasing the density. It’s not about trying to change it, just showing it more carefully so that young people don’t see Yamato as a thing of the past. It was originally done well, and it can be better if it’s remade with modern technology. Remakes aren’t always so successful, and I think this is great as a rare example. 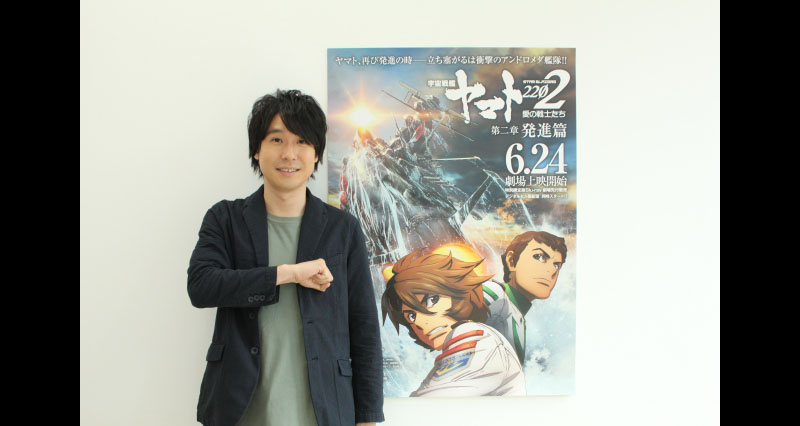 Looking ahead for answers from the 10-minute preview

Interviewer: I’d like to hear your thoughts on the first 10 minutes that were delivered from Chapter 2.

Suzumura: I thought about it. It was quite shocking to see the explanation of how Andromeda was expanded. I can only say that it was shocking. (Laughs) People who watched the original would be surprised, too, and I think they’d say, “I see…” People who like Farewell to Yamato love Andromeda, so I think if there was one episode that concerns Andromeda it would be very convincing. Andromeda will be involved a lot in the future, so I think it’s a big setup. But I don’t know how it connects and what happens to us in the episodes still to be recorded. I don’t know because I’m not affected. I wonder what is to come.

Interviewer: In the episodes of Chapter 2, there seems to be a lot of foreshadowing for the future, doesn’t it?

Suzumura: In the trailer for Chapter 1, I saw Garmillas people lined up to watch the naval review of Andromeda and said, “What’s that all about!?” I only watched the trailer. (Laughs) However, the answer was tied in with the former work, 2199, and in 2202 there’s an alliance with Garmillas. How Andromeda was made is properly depicted, so they will sure be entangled in the story. I have a feeling that there’s even more of a sense of backstory than in 2199.

Interviewer: By the way, Shima didn’t appear in the first 10 minutes.

Suzumura: It’s because Shima acts rather pretentious in Chapter 2. (Laughs)

It’s a waste if you don’t watch the story of Yamato‘s launch in the theater!

Interviewer: Please give a message to those who will go see it in a theater.

Suzumura: I think you’ve already seen Chapter 1, and it’s not an exaggeration to say that Chapter 2 is the real beginning of 2202. This is the Launch Chapter, and Yamato will launch. However, Chapter 1 wasn’t merely an approach run. I think Chapter 1 was wonderful. Conversely, it’s the basis of entertainment in the modern age to expand the development quickly, so I think the adult opinion was probably, “Launch Yamato in Chapter 1 if possible.” It was a bold choice to launch in Chapter 2 instead of Chapter 1, and it’s proof that time was very carefully spent in depicting the conflict before Yamato launched. I think this work is being carefully made.

Meanwhile, Chapter 2 is finally being shown and Yamato launches. I think this new launch of Yamato again will be a historic event. It’s a waste if you don’t watch it take off in a theater. By all means, your chest will get hot when Yamato launches. I’d like it if you could burn the image of Yamato overcoming adversity into your memory at a theater, so please go. Thank you.

Interviewer: Thank you for today.