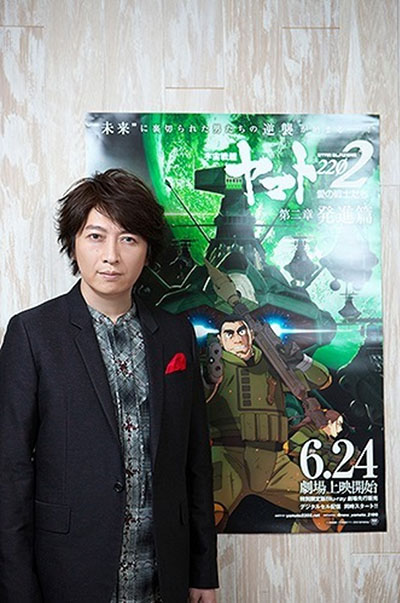 Daisuke Ono: “I carried” the launch scene in Yamato 2202

Chapter 2 of Yamato 2202, the latest installment of the popular Space Battleship Yamato anime series, premieres in theaters on the 24th. In Chapter 2, Launch Chapter, Yamato finally starts. Daisuke Ono, who continues as the hero Susumu Kodai from Yamato 2199, shared his thoughts on the launch scene and the highlights of Chapter 2.

I sympathize with the pent-up anger of middle management

Interviewer: How do you feel prior to the release of Chapter 2?

Ono: With Chapter 1 I asked, why do Kodai and the others have to back on Yamato? I saw it as a conflict. So the real launch happens in Chapter 2. Yamato finally flies into space, and a catharsis has been born in the time between chapters 1 and 2. I myself feel that I’m starting on a journey at last. I feel this is indeed the second chapter.

Interviewer: In 2199 the mission was to save Earth. This time you start out on your own will.

Ono: With 2199, I certainly think part of it was moved by the “I have to do it” sense of mission. But this time we gather by our own will, so it’s a different starting point. Of course, there’s the “I’ll do it” part where each person thinks it’s important and you feel the strong will of them all.

Interviewer: Kodai himself is troubled.

Ono: It’s a resentment toward the state Earth has reached, becoming a place he doesn’t recognize. In 2199, Kodai reaches the state of mind of, “we can reach an understanding even with aliens,” but rather than logic I think he felt that instinctively. Therefore, why can’t the same be true of Earthlings? Why can’t they understand each other? That would be frustrating, wouldn’t it?

Harutoshi Fukui, who is responsible for the story and scripts of 2202, said he wanted it to reflect contemporary human relationships, and I would say you can feel that part vividly. I’m 39 this year, and it feels a little painful to get older. I’m now at the age of middle management, when you reach a state of sorrow over society not going well. I think that’s something like the pent-up anger Kodai feels. I have similar feelings. If you’re a Yamato fan of the older generation, you might be able to sympathize.

Conscious of Captain Okita in the launch scene

Interviewer: Chapter 2 isn’t just about Yamato, there seems to be a tense battle scene, too.

Ono: There’s a scene where the crew who appeared in 2199 helps Yamato get going, and there was a lot going on in it. It’s a very striking scene to me personally. Also, the scene with the crew coming back even after Yamato gets going is impressive. I think there was something extraordinary in their thoughts. And with Shima, there was even the choice of, “I’m not getting on board.”

Interviewer: The trailer featured the famous line, “Yamato, Hasshin?” [Launch] What did you think of that?

Ono: It was a feeling of, “I’m carrying this on my back.” In the past I wanted to clear my regrets for my older brother and it was a feeling moved by various thoughts. This time we start the trip through my own determination in addition to my being chosen as the acting captain, so I finally felt like I could understand Captain Okita. In that sense, I felt a lot of pressure. I was conscious of how Takayuki Sugao spoke in the part of Captain Okita, so I performed it with that voice in my head. Kodai is certainly moving forward as a leader because I still think of Yamato as Captain Okita’s ship.

Interviewer: Finally, a message to the fans, please.

Ono: At the time of Chapter 1, I honestly had a complex thought. Why do I have to get on board Yamato again? Moreover, there was the feeling of fighting anxiety and pressure. But Chapter 1 was received favorably by fans who said, “Yamato is good, isn’t it?” and I felt the character of the entire staff’s “Yamato love.” With Chapter 2, I think you can feel the determination and resolution of, “I’m going to make a new Yamato.”

When you watch Chapter 2, you’ll want to go along together to see where the story goes. No, it could be said that there’s no choice but to see it through to the end. Since it’s easy to become anxious about how it’s expanding, I hope you’ll be ready for it. I absolutely think that you’ll agree it was a good thing to get on board this ship. All the fans, please join us and let’s take this ship into the future.