The following interview was deemed “official” and appeared June 22 on five different entertainment websites: M-on, Mantan Web, Nizista, T-Site, and Web Newtype. (Click on each to see the original post.)

Interviewer: Chapter 1, Beginning Chapter was screened in theaters this February and was a big hit. Please tell us your impression of this story. 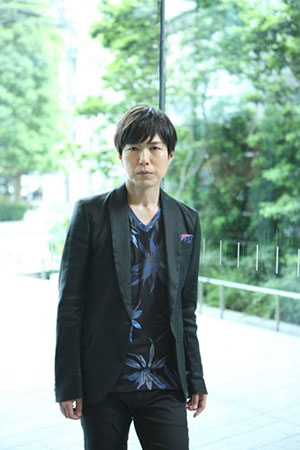 Kamiya: When I got involved in Yamato 2202, I watched all of the previous work, Yamato 2199. Of course, you can enjoy the content even if you begin watching it with 2202, but after seeing 2199 and understanding the relationships of the characters, it added a lot to my work. The battle scene at the beginning of Chapter 1 was so awesome, I wouldn’t be exaggerating even if I said “it’s beyond normal.” (Laughs) I felt that it was produced with considerable attention. In the first place, I think the hurdle is considerably high to produce a 2199 sequel as a remake. Because of the enthusiasm I felt from the visuals in Chapter 1, I thought it would be a good idea to take yourself to the theater.

Interviewer: Please tell us how you feel now that you’ve made your first appearance in the legendary Japanese anime series Space Battleship Yamato.

Kamiya: Even if it’s a work everyone knows, it may not have a significant relationship with other animation. First of all, it’s quite different from other works. So if you are older than me, you know Yamato well. Even before the screenings, the reactions of people around it was great. Since it wasn’t a work I’d been previously involved with, I realized the magnitude of Yamato again. Since I’m concerned with voice recording, I intend to do it without letting in too much excitement.

Interviewer: What did you think about when you did the voice recording for Chapter 2 (Episodes 3-6)?

Kamiya: At the time of Chapter 1, I asked Mr. Fukui and Mr. Habara about the character of Keyman, and I based the role on that. Personally, I don’t think it’s a problem to play the role of a character whose foundation is a bit blurry. If you watch Chapter 1, I think you can understand that I’m not sure myself what Keyman is thinking. (Laughs) I think it’s best to have a clear intention when you do a specific performance, but it’s hard to get it all into a line. Of course, I perform it after confirming the intent with the director and the sound supervisor, and in cases where there is no clear direction I’m allowed to find my own balance. I don’t think it’s necessary to convey Keyman’s intentions in detail, so if you’re thinking “who is this guy?” when you see it, that’s the correct response. 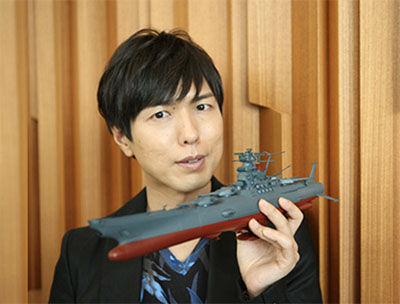 Interviewer: Have any of your first impressions of Keyman changed after playing him in Chapter 2?

Kamiya: There isn’t very much of him at this point, but I think his relationship with his senior officer Varel is a place I have to take care with. In the scenes where Keyman and Varel are on their own, I consciously play it with a slightly different atmosphere. But this is my own personal judgment, so I’m not sure if it matches the intention of the director. (Laughs) There is the original Yamato, then there is Mr. Fukui’s script and the director’s visuals, and I provide a voice. Animation is made with various elements, and that’s the element I can add. For the moment, Keyman hasn’t moved much from his initial image, but when we glimpse a change I think that’s when this story will further develop.

Interviewer: What do you feel is the appeal of Keyman as a person?

Kamiya: Honestly, I’m not quite sure. This is not limited to Keyman, but what kind of appeal does this character have within the whirlpool around this work? I try not to think about it too much. If I play a role in that state, I always tend to misjudge it. (Laughs) However, many people may be fascinated by a mysterious part where you don’t know what a character is thinking.

Interviewer: In the trailer that is currently out, there’s a meaningful line from Keyman: “There is a secret darkness hidden behind the beautiful nature of that which resurrected the Earth.” I think a lot of fans are anxious about that…

Kamiya: I think you can certainly look at that line as a symbol of 2202 as a sequel to 2199. It’s a line of explanation about the Earth’s current state after something that happened in 2199. As for what exactly is going on, it becomes clear in Chapter 2. I think you should see it with your own eyes.

Interviewer: Please tell me about the highlights of Chapter 2 that you personally recommend. 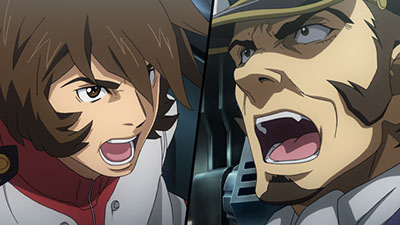 Kamiya: It’s the scenario of Yamato vs. Andromeda that was also in the trailer. I think that burns. There’s a place where Kodai and Yamanami both shout, “Prepare for impact!”, and the voices were not recorded separately. Such lines are usually recorded separately and balanced in the audio mix. I think the director and staff believed that there would be momentum in the interplay of two people [if they recorded together].

The concept is that Mr. Ono the upstart confronts Mr. Ehara the veteran. If sound pressure was lost, you’d hear that it was weak, so I think the recording setup was changed to get sounds that wouldn’t yield to each other. They did a test run two times and then the final recording, and it was very impressive.

After that, there is the Yamato launch sequence indicated in the title of Chapter 2, Launch Chatper. It has a very tense feeling. If you wondered how Yamato gets ready for a voyage, I think you’ll be interested in that part, so please check it out at a theater.

Interviewer: Please give your message to fans who are looking forward to seeing Chapter 2.

Kamiya: Compared to Chapter 1, the scale is simply doubled, and I’m sure you’ll be satisfied with it. This time there are four TV episodes. A lot of scale is used in Yamato‘s launch episodes, and it leads carefully to a point where it connects to the next episode. Yamato‘s departure has a back story, and everyone is conflicted about starting on the journey. The new part looks into everyone’s mind as they launch without permission, and I think the way it’s depicted by a first-class staff is the biggest point of Chapter 2. If you’ve seen Farewell to Yamato, the basis for 2202, I think you’ll be fascinated.