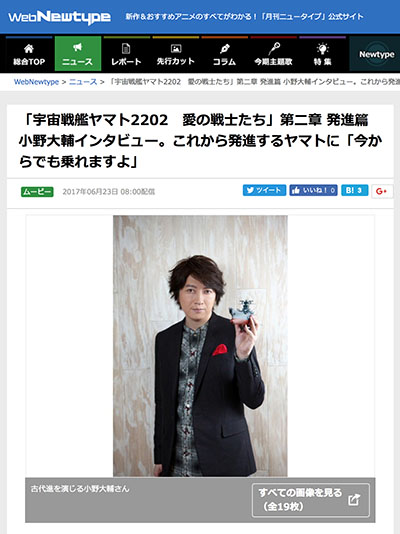 Space Battleship Yamato is the masterpiece that has changed shape many times in its presentations since the 70s. The latest work, Yamato 2202 Chapter 2, will premiere on Saturday, June 24.

In this work, which will consist of 7 chapters, Chapter 2 is the one which brings the excitement of Yamato finally launching from Earth. What are the conflicts and resolutions of Kodai and the others, leading to a launch scene depicted with overwhelming power? What is the message of this work from there? We heard about it from Daisuke Ono, who has played the main character Kodai since the previous work, Yamato 2199.

Interviewer: In Chapter 2, Kodai makes his decision and gets on board Yamato. Despite his fears, he faces off against the latest battleship Andromeda. Did you feel sympathy with his resolution?

Ono: In Chapter 2, Kodai realizes the Earth government is not a monolith and gradually notices that great powers are moving in unknown places. I think it’s really scary, but I thought the decision to get on board Yamato despite the conflicts was very human. I’ve been an actor for 15 years, and now that I’m working as a freelancer there are many things I have to decide. Therefore, I sympathized with Kodai’s wavering feelings.

Interviewer: Do you take courage from Kodai?

Ono: I think it’s good to be troubled. Because Kodai has the image of a hero, he seems to make prompt decisions, but his courage comes after being afraid, because he’s responsible. Someone reckless would be irresponsible, and I think of Kodai as a leader. He may have made prompt decisions before, but I think the Kodai of 2202 is more human.

Interviewer: It seems to be a highlight when Yamato‘s crew gradually joins after Yamato starts up.

Ono: That is one of the highlights, and what came through strongly in the launch scene was a parting. The crew that traveled together and protected the Earth in 2199 now watches Yamato‘s departure. “You’re not getting on? Can that be done?” (Laughs) That was a good time for that spirit. Some of the members couldn’t get on board and others came back. There’s a strong synergistic effect.

Interviewer: It is said that the big theme of 2202 is that “love will be tested,” and showing that some can’t get on board Yamato feels like a way to depict love through “self-sacrifice.” 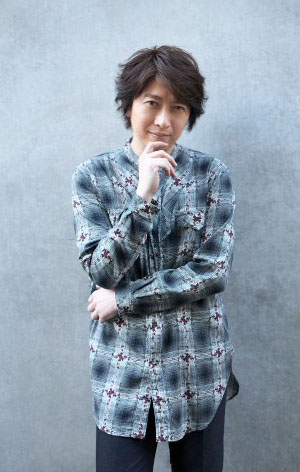 Ono: Everyone takes action while thinking about someone else who is important. It seems that Shima is trying to stop Kodai, and it’s not easy to stop a friend from making a life-changing decision. I think that’s a love that goes beyond friendship, isn’t it? The original work, Farewell to Yamato was all about self-sacrifice, but in 2202 I think there is a convincing expansion of the story that you can properly sympathize with. As for what happens in the future, Harutoshi Fukui wouldn’t tell me even if I asked. (Laughs) He only tells one of us what we need to know since he wants us to struggle there. Therefore, the voice recordings are very scary. I never know what will happen. (Laughs)

Interviewer: Just like on Yamato itself, you pull the cast together for all seven chapters as a leader in voice recordings. What kind of feeling do you get from there?

Ono: Those of us who traveled together in 2199 really look like Yamato‘s crew. When we meet again in 2202, Kodai and Shima embrace each other with “it’s been a long time,” and the feeling was the same for us in the studio. This time, the actors for the characters who get left behind on Earth told me “I wanted to ride along!” with a sad expression. (Laughs) I think it gives me a feeling of regret and having a harder time to get the job done. I looked at them and said, “Thank you, I’m sorry, I have to keep going.” I can’t dismiss anyone’s feelings. I think the chance to have such feelings is what’s good about being on this site.

Interviewer: A strong bond is born under Yamato, isn’t it? Speaking of Yamato, I was impressed by Kodai’s shout in the artillery scene that makes fans go crazy, which was unchanged from the original.

Ono: Fleet battles are one of the real thrills about Yamato, and I think the aesthetics cultivated through 2199 and the older works are concentrated there. Strategy is decided based on information transmitted by an operator, and the attack order is given. The combat sequence is very tense and you get pulled in. You can’t really rehearse for that state of extreme tension. They are the most intense lines and I try to convey that heat to the whole crew. 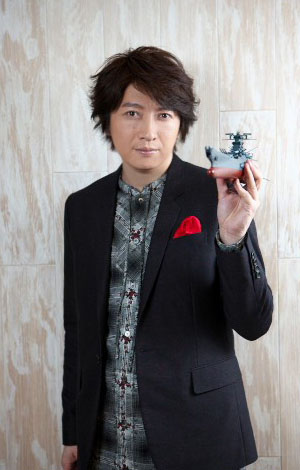 Interviewer: Before you became involved in 2199, what kind of image did you have of Space Battleship Yamato?

Ono: I recently returned to my parents’ house for a radio program, and I found an 8mm film of a Yamato movie. It seems my grandfather bought it. Certainly, it sat on a corner of the bookshelf in my room for a long time. When I saw it, it was like I’d been involved with Yamato on the genetic level, and the impression went beyond words. Since then, I learned that it was a movement involving not only children, but also adults, and now Yamato is being made with the feelings of people today. I think I was able to rediscover that film because I became involved as Kodai.

Interviewer: The character from the original revives with new images in 2202, and it can also be said that the old fans encounter new fans.

Ono: From the scene where Yamato launches in Chapter 2, I feel a positive power that goes beyond logic. I think people who watched the original and those starting with 2202 will rise to it irresistibly. Yamato itself has great energy. So if you’re one of those who hasn’t seen it yet, I want to say that I’ll be there on time. Let’s board this ship and ride it together!