Picture yourself as one of the lucky Japanese fans who got to see the very first TV broadcast of Space Battleship Yamato in October 1974. Right away, you’re grabbed by the art design, the drama, the atmosphere, the music, and the promise of greater things to come. It’s exactly the sort of nuanced, sophisticated anime you’ve been waiting for.

Chances are, most of the merchandising wasn’t meant for you.

Despite all the artistic strides that had been made in the 1960s, TV Manga (the word ‘anime’ didn’t exist yet) was still considered a children’s medium. The arrival of Lupin III, Mazinger Z and Gatchaman in the early 1970s were the first indicators of the change that was ahead, and Yamato would later provide the tipping point. But until that point was reached with the Yamato movie in 1977, when licensors could actually SEE who the audience was, almost all their efforts went toward the making of “kid stuff.” 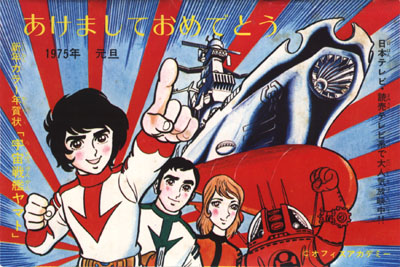 Once this fact is understood, Yamato begins to look like a bold (perhaps even foolhardy) attempt to entertain an audience that wasn’t on the radar yet. Tremendous effort had gone into its design and animation, both of which were full of subtleties that only older viewers could truly appreciate. Most of this was lost when Yamato was stuffed through the merchandising mill, and what came out the other end was essentially “laundered” of authenticity.

That said, it’s fascinating to look back (now that all the wrongs have been righted) and see the undeniable charm of this first generation of products. It vividly displays the standards and trends of the time and teases us with different take on Yamato that was all about fun. From a purely historical standpoint, it’s also interesting to note that not one of them had an English title. That didn’t exist until “Space Cruiser Yamato” went into common useage in 1977. 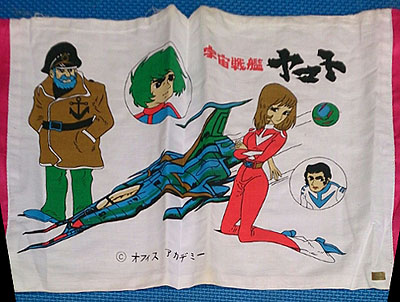 The Athena Company made Yamato towel and washcloth sets. This large-size bathtowel used early character and mecha designs in a reversible pattern. Bombastic action poses of Kodai such as the one above left were a common motif in early products.

Based on the similarity in style, the handkerchief at right was probably also made by Athena. Color choices weren’t subject to a lot of quality control in those days. 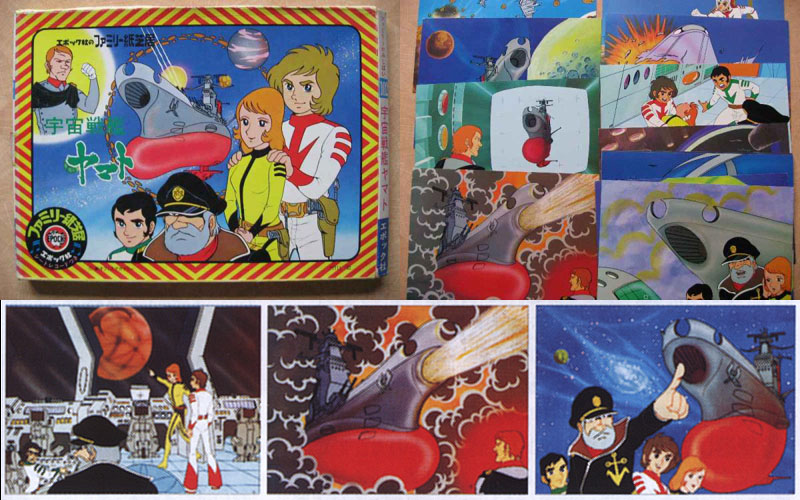 The Epoch Company had a long-running series called the ‘Family Picture Story Show’ which consisted of color story cards and a flexi-disc record with a radio-drama style recording. This Yamato set was volume 102 in the series, and was very likely the first official Yamato product of any kind. See (and hear) the entire thing here. 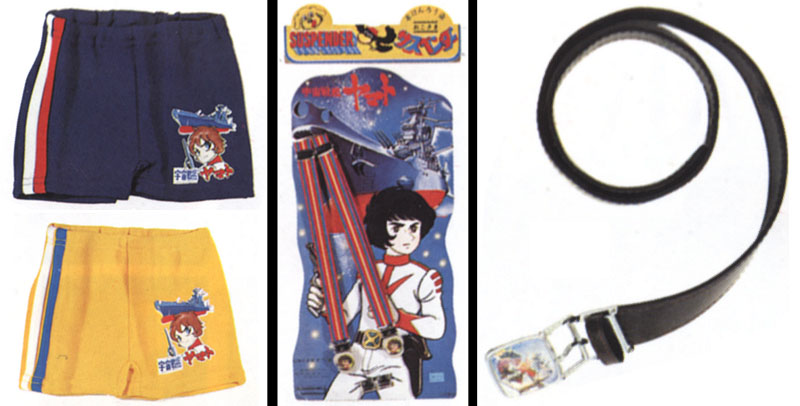 The Iwai Company made children’s clothing items. Their entire Yamato lineup is pictured here: swim trunks, suspenders, and a belt. Because that’s really all you need sometimes. Note: the swim trunks are unique in that they are the only piece of Yamato merchandise to include artwork from the “lost” manga series by Yuki Hijiri. Read it in full here.

This baseball cap from Chuo Boshi Hanbai [Central Hat Sales] put some barely-contained Yamato action right on your noggin with soaring fighterplanes and an explosive scene of Kodai taking a giant leap as Dessler puts up his dukes. Just like in the show!

But here’s what made this cap truly Yamato-riffic: flip-down sunglasses that fit right over your eyes to protect them from that nasty Wave-Motion Gun flash!

Popy, the toy division of Bandai, made Analyzer available in three adorable colors, blue, grey, and red. They couldn’t do much, but they were certainly not a choking hazard. Today an entire legion of soft vinyl toy collectors idolizes these sorts of products, the goofier the better. Read more about the Popy toy company here.

Popy was best known for die cast toys like the solid-metal Cosmo Zero (above left), which could shoot discs from its nose–EXACTLY like in the show. Bandai’s model kits of the Cosmo Zero and Black Tiger (above right) were much closer to the animation models, but compromised them with wheels and windup motors. 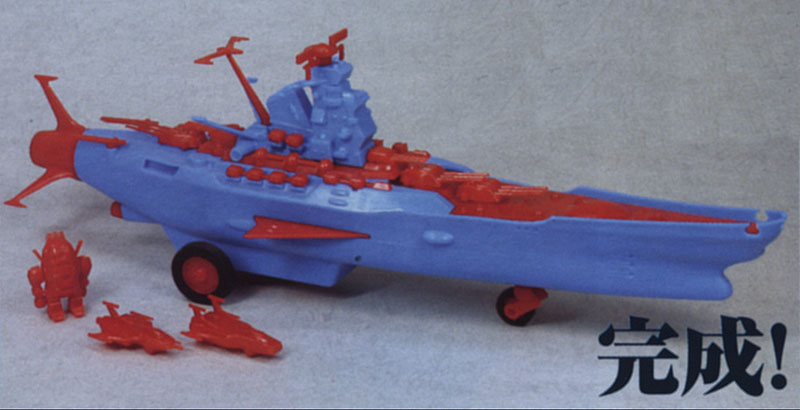 The first Yamato kit now lives in infamy as the ‘Zenmai’ model, named for its bulky windup motor, which drove modelers crazy and may have single-handedly spawned an entire generation of scratch-builders. Read about the entire history of Bandai’s Yamato models here.

…a pocket wallet with mini-notebook, and plenty more… 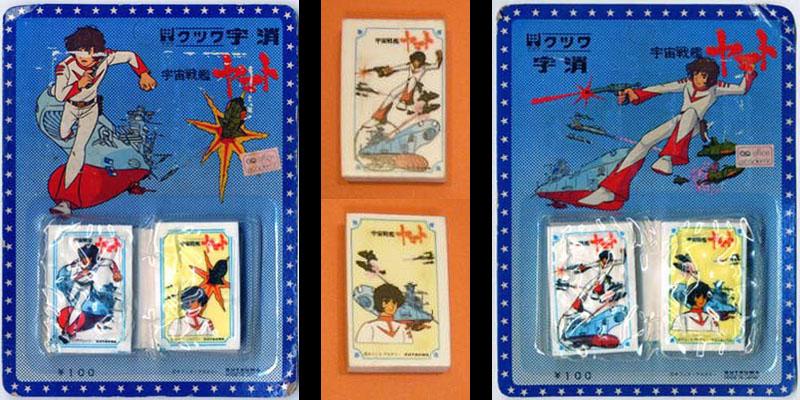 The same artist provided illustrations for a pair of eraser sets (above) and pencil cases (below). Note also that his Kodai chooses not to wear socks. This, too, is a bit of a theme…

Sockless Kodai reappears on these pencil sets manufactured by the Tombow Company (Tombow is the Japanese word for Dragonfly, hence the logo), which were probably drawn by the same artist who worked for Kutsuwa; exhibit A would be the matching off-model handguns. Tombow made both color and standard pencils, some of which remain unused in the hands of collectors. 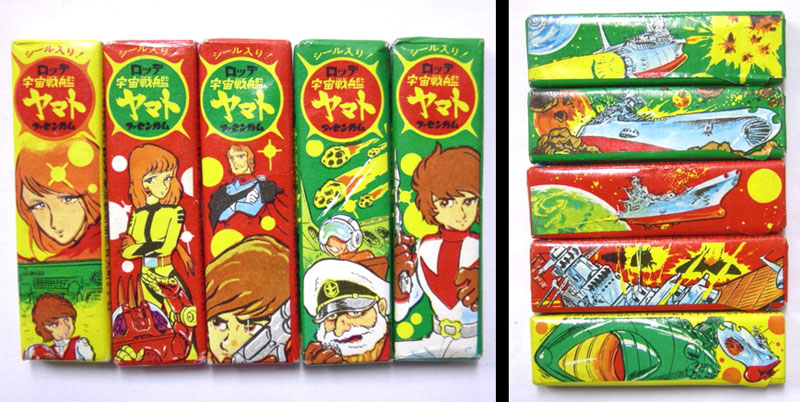 The Lotte Candy Company (still in business today) pushed their package art to a higher standard, keying off Leiji Matsumoto’s manga drawings and some more-developed spaceship designs. Sticks of gum came in the wrappers shown above and, in the great Bazooka Joe tradition, came with prizes inside. There were three types: a sticker set (example below left) a character image (below center) or a secret message (below right). Click here to see more stickers and here to see the character images. The inclusion of Captain Harlock makes this a rare product indeed. 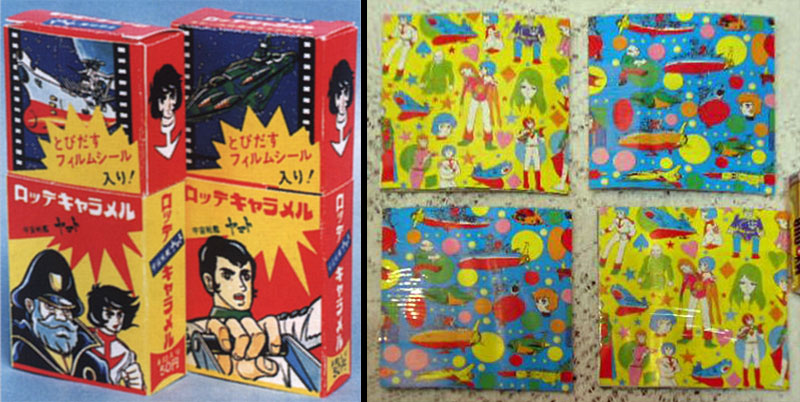 Lotte also made caramels, which came with their own sticker made to look like filmstrips (see a collection of them here). Another company, Showa Note, made the origami paper shown above right.

Their origami paper notwithstanding, Showa Note released the best-looking early Yamato products. Like Kutsuwa, they used a small stable of artists whose style is easy to track from one product to the next. As indicated by their name, Showa Note specialized in paper goods and had a much broader lineup than is shown here. Above are two “Showachan Kakikaki” note pads. (“Kakikaki” is a kiddified term that translates to “write/draw.”) The game shown at upper right was on the back cover of both pads.

Shown here is the interior art for both of the note pads, which sandwiched several blank pages.

Here are two variant covers for a “Shouchan Nurie” (“Nurie” is pronounced noo-ri-ay and translates to “coloring book”) which contains the largest collection of primordial art. They were drawn by the same artist who did the note pads, and this book has understandably become a true collector’s item. See it from cover to cover here.

Another one by the same artist is titled “TV Manga Nurie” and seems to have different art inside, at least going by this single photo.

Here is yet another coloring product, a set of two posters with much better art than their predecessors – obviously done with direct reference from the anime. They may, in fact, have come from a different publisher. Data is still elusive.

Above left is a mini-jigsaw puzzle, next to its larger, more colorful counterpart showing our heroes in even greater peril.

Here is a pair of sketch pads (about 7″ x 10″) with the same art style as most of the other Showa products. In the first, a smirking Dessler exudes staggering amounts of antagonism, while on the left Kodai takes aim with his pencil-thin almost-Cosmo gun while Yamato nails a Gamilas destroyer in the background.

The interior of these pads was mostly empty (about 50 blank pages) with a title page that gave Captain Harlock another appearance. The back cover contained two DIY flying saucers fully capable of putting someone’s eye out.

This edition included a game on the back with yet another short-lived cameo for Captain Harlock, and a thoroughly depressed Sanada.

Get a better look at the entire set here.

Nothing says Yamato like a canteen or thermos, as represented by this three-product lineup from the Musashino Company. Action hero Kodai is back, this time throwing a gang sign from the back of the thermos while Analyzer nods approvingly. 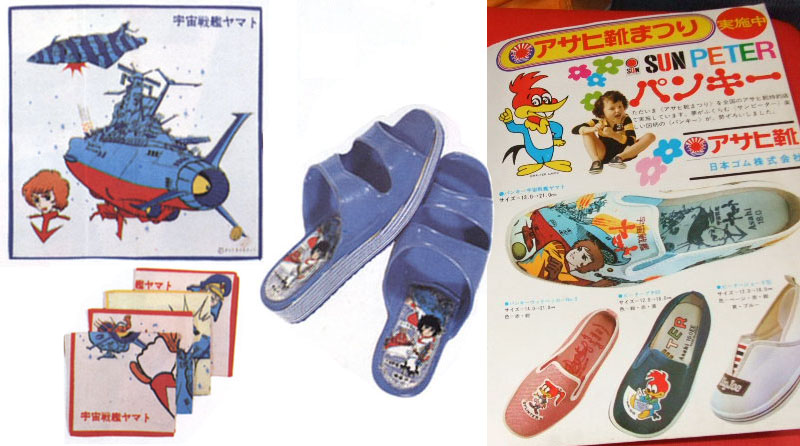 The Nakanishi Company made the handkerchief set shown above left (and below), which would have traveled well with the beach sandles (center) from the Maruchiu Company. Once again, Kodai and Analyzer take up a fighting stance on the sandals. Google that sentence all you want, you will only find it here. The boater shoes shown in the magazine ad probably document the only known meeting of Yamato and Woody Woodpecker.

If any children actually sat down to watch Yamato on Sunday evenings, the Sanko Toki Company made sure they had appropriate dishware for their TV trays. This included a plate and rice bowl (above) and three different mugs (below). 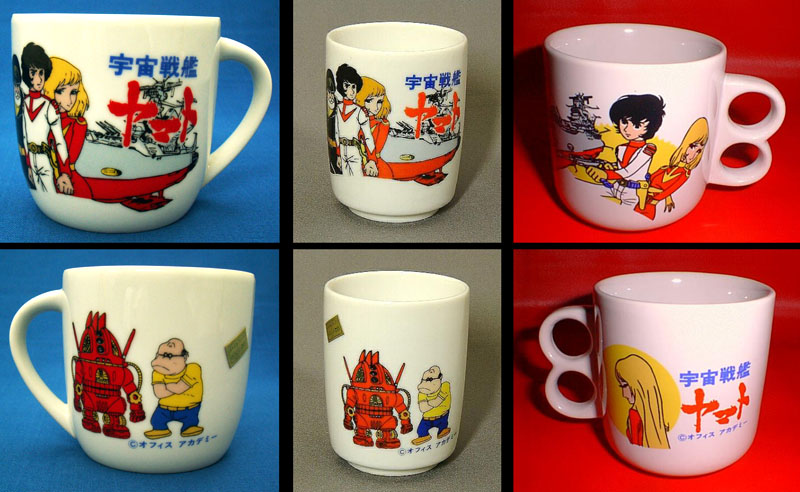 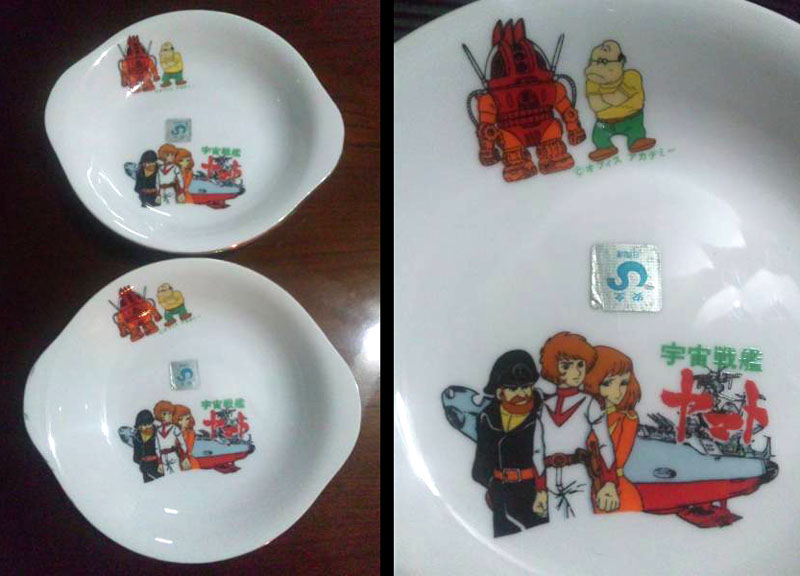 This was another plate in the set; the artwork chosen for the dishware was an odd mixture of character designs, some from the TV series pitch book, some from the animation unit, and at least one manga drawing (Kodai with the oversized Cosmogun). All included an Office Academy copyright. 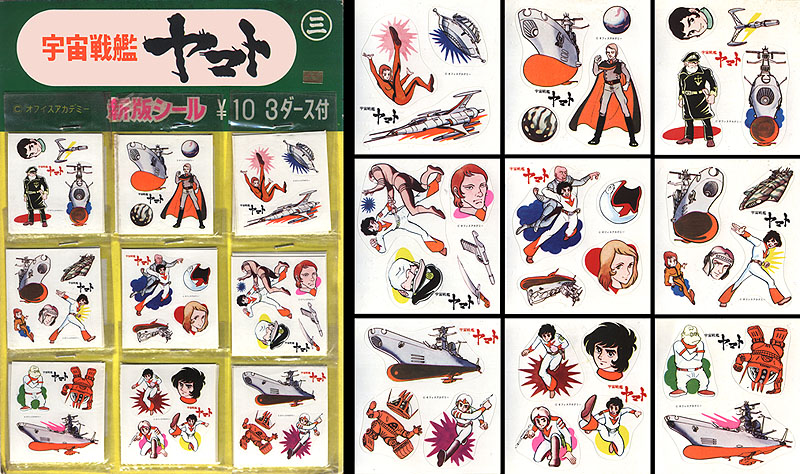 The Marusan [Circle 3] Novelty Company released a truly strange set of Yamato images in this lively sticker set. Action hero Kodai is joined here by action hero Yuki, both prepared to defeat the Gamilons with the fury of their kung fu. (You remember that episode…don’t you?) Get a better look at this set here, which includes stickers not shown above.

Japan’s Amada Printing Co. was another early entrant into the licensing brotherhood. Amada made Mini Card sets for many anime and live action TV programs, and they all followed the same format: 2″ x 2.5″ cards issued by the hundreds to drive collectors crazy, and a variety of 3″ x 5.5″ pocket books to keep them in. Pictured above left are 5 of the 7 known pocket books (some shown front and back), along with a small number of the cards. Though cards like these were easily eclipsed by book publishing in later years, they were the only source of color stills during the initial broadcast of Series 1 and thus were highly valued by the first generation of fans. 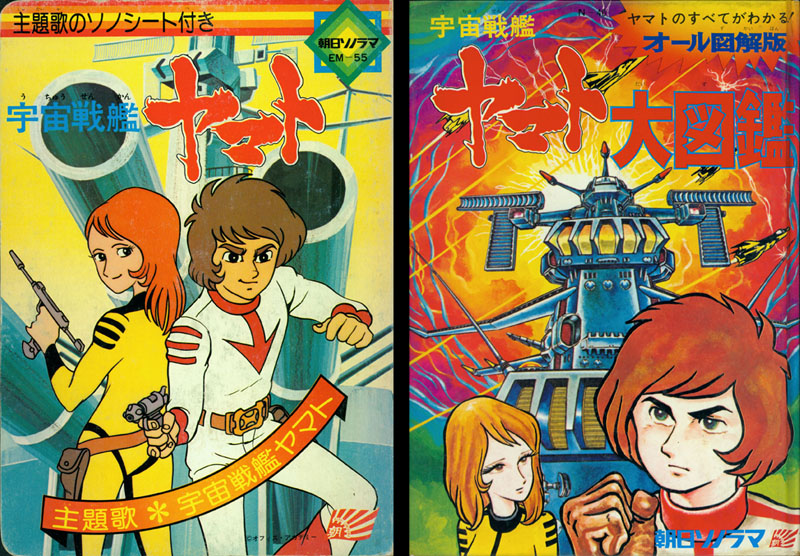 As a major sponsor of the first TV series, Sonorama had the early lock on the book rights, though several competitors would join the fray in later years. Their first was the Sonosheet Book (above left) which was published in October 1974 and named for the flexi-disc record it contained. It was just one of many ways a fan could buy a copy of the main title theme, in this case as something to listen to while browsing through the crudely-drawn storybook pages. Sonorama’s second volume, the Space Battleship Yamato Big Illustration Book (above right), contained an identical flexi-disc and a vastly superior set of illustrations by the mechanical designers at Studio Nue. It was published in December 1974 and was the first accurate representation of the series.

See both of these books from cover to cover here. 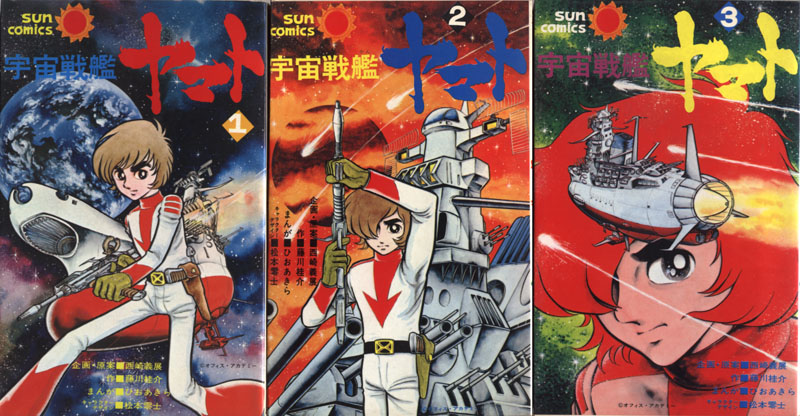 Asahi Sonorama was also the publisher of the first Yamato manga, a three-volume series by scriptwriter Keisuke Fujikawa and artist Akira Hio, which later gained prominence as the only Yamato publication that preserved some of the deleted TV episodes. Read about them in detail here.

Sonorama’s final product from this era was the 2-volume Yamato novelization by author Arashi Isuzu, which presented a very different version of the story. (Read all about it here.) Finally, the Leiji Matsumoto manga was collected in the paperback shown above right, published by Akita Shoten in 1975 immediately after the TV series went off the air. This was the beginning of a product hiatus that would last just over two years. Fortunately, a select group of dedicated fans were there to fill it in their own way.

Find out how they did it here.

Continue to Vintage Collectibles for the Yamato movie