A round table discussion 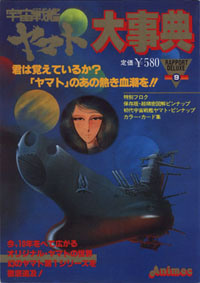 As the Yamato saga was ending in 1983, numerous books and magazines published retrospective coverage on every aspect of the phenomenon. One such tome was the Space Battleship Yamato ‘Rapport Deluxe’ special, published by Animec Magazine. Its primary content was a detailed overview of the first TV series, which included the only known published interview with those who ran the best-known fan clubs, Cosmo Battleship Yamato Laboratory (CBYL) and its successor, Yamato Association (YA).

The interview took the form of a round table discussion and is presented here in full.

We cannot leave out the work of the fan clubs when talking about the early days of Yamato. They didn’t have it as easy as people do today, and it took quite a struggle to get things done during that time. We asked the members of Yamato Lab and Yamato Association to recount their experiences. 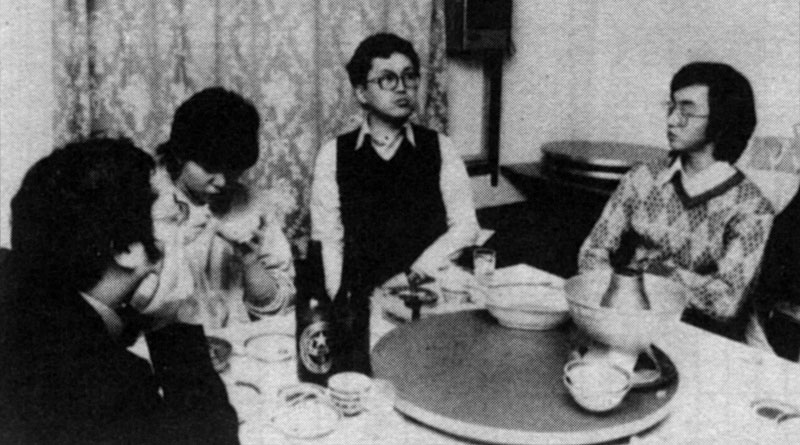 Former CBYL member, president of YA, employee at an advertising agency

Former CBYL president, graduate of the Tokyo Institute of Technology, employee at a computer company

Interviewer: Can you tell us about the situation and background of that time when it all began?

Nakatani: Yamato began when I was in high school. When my fellow students and I, who were big fans, went to check out the studio I met Ms. Kushino there. We saw a mountain of original material, so we formed the Lab to ensure that Yamato would remain in some form for all of us.

Kushino: When I first went to the studio, Nakatani was dubbing a BGM cassette. I went up to him and asked, “Are you one of the dubbing staff?”

Nakatani: That was around the time when the 18th episode was shown, and it was also my third time at the studio.

Kushino: Actually, I really wanted to visit Tatsunoko-Pro, but when I called them up, they refused. When I called up Office Academy, they said, “come on down!”

Komaki: That was a mistake (laughs). 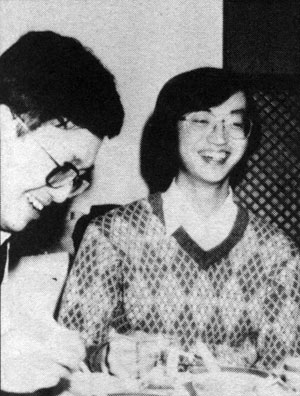 Nakatani: At first, I didn’t know where they were making it. So I looked up Daiichi Houei in the phone book and called them up, but they just gave me the runaround. They told me to try Toyo Studios or Studio Zero (laughs). I must have called at least ten places.

Komaki: When did the club start production [on fanzines]? They asked me to help out when I joined, but I never knew when it all started.

Nakatani: It was when the broadcasts were ending.

Kushino: Yeah, around episode 25, when the voice recording was going on.

Nakatani: While we were underway, I was a senior in high school, preparing for my college entrance exams, so we left it in the good hands of Kushino and Mr. W.

Interviewer: The notorious Mr. W! Just who is this Mr. W?

Kushino: Mr. W did most of the work. I just made the final copy…kind of like adding my name to the credits…

Nakatani: I was planning to just make photocopies, so I was surprised when we ended up with offset printing.

Ito: Mr. W was always doing that…
Nakatani: He’s also the one that calculated the reduction of copies. It was the first time I’d heard of that.

Komaki: He always attended various other meetings, so that’s where he got his know-how.

Ito: So how did Mr. W get involved in the first place?

Nakatani: That’s a good question. He happened to be at one of the meetings, and then he just took off, getting involved in virtually everything.

Nakatani: Mr. W hated to have his name on anything, so after the second publication, he simply disappeared, working on editing and “behind-the-scenes” stuff under the alias of Haiji Urawa.

Komaki: He was the idea man who did whatever was necessary to get things out there and sold.

Nakatani: The second volume had 5 different covers in separate colors, so it was easy to buy the same thing more than once by mistake. 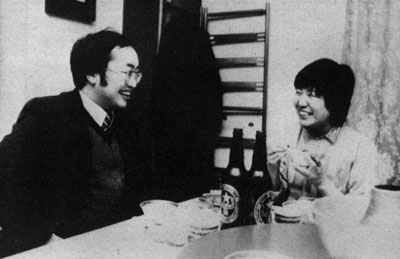 Komaki: He was a genius at marketing. I bow down to him (laughs).

Interviewer: Was the artwork in the fanzines provided by the studio?

Nakatani: We paid for the rights to copy the materials in the fanzines.

Nakatani: That’s right. After the second or third time, we asked if it’d be okay to make copies. But it’d take forever (laughs). With three people, we’d get 500 copies made, paying about 10,000 yen out of our allowances (laughs).

Ito: You guys were really generous.

Kushino: The production was in Iidabashi, but the Sakuradai Studio didn’t have the busybodies there.

Nakatani: It was a condominium studio. The first floor was a bread bakery. Second floor had the production setup. Third floor was planning. Fourth floor was the director’s office. It truly was just an ordinary (Japanese-style) condominium. When you went up, it even had tatami mats on the floors, which surprised me (laughs).

Komaki: It was very relaxing.

Nakatani: There wasn’t any sense of urgency there. When we asked if they were working on materials two weeks before broadcasting, we were told that actually that ran against studio’s policy–one of those surprising details one learns in the dark corners of anime production.

Ito: We were also able to get our hands on a lot of cels and production artwork.

Kushino: Yeah, because we helped them move out, and they didn’t need them anymore.

Komaki: Nowadays, those cels would be famous, but back in the day, the guys that worked under the stairs were always stuffing them into cardboard boxes and making off with them (laughs). Now all that stuff is probably buried somewhere, or in the garbage.

Kushino: We picked out only the good stuff when we helped out, like the day before the move. And we always asked first before taking.

Komaki: And the artwork stuck on the wall above the bathtub really got trashed with moisture.

Nakatani: That’s because they didn’t care whether it got trashed or not. Thinking back on it now, that Mr. Ishiguro was a real nice guy. Even though he must have been busy, he always took some time out to deal with us.

Nakatani: I wish I could have thanked him. He really went through a lot of trouble for us.

Interviewer: So that’s how you got your material for the fanzines. 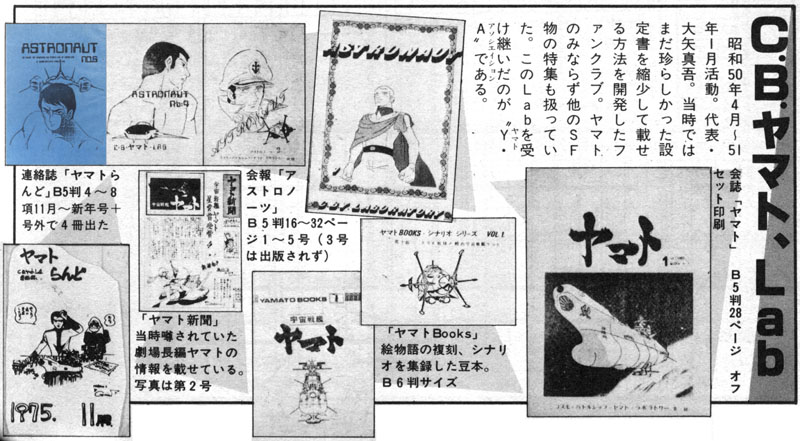 A selection of fanzines published by Yamato Lab, April 1975 through January 1976

Nakatani: Astronaut focused on the members’ views, as well as the parodies. The fanzine and club reports were separated. In the fanzine, the focus was the content and original artwork.

Ito: But the club report was sold at Comiket…with different colored covers.

Komaki: Around that time was when the doujinshi started becoming popular. It was considered interesting just for a little production art to appear in those ‘zines.

Kushino: That was unusual at that time.

Interviewer: Can you tell us about when the “Lab” was closed and YA was created?

Kushino: There were just too many members. Whether it was about money, or about shipping and handling, I was handling it all…and it was just hellish. And if it continued, I was going to quit!

Ito: That’s when the Lab closed and was reborn as YA, with 200 members. We even created our own photo ID! (laughs)

Komaki: Yeah, we also tried dropping that obnoxious Kemarin fella, from Hokkaido. He kept sending us letters, so Mr. W wanted to axe his membership.

Kushino: But he got in because he was going to attend Japan Arts, or Tokyo Designer School, so we wanted to have him do illustrations. He just never knew how lucky he was! (laughs) 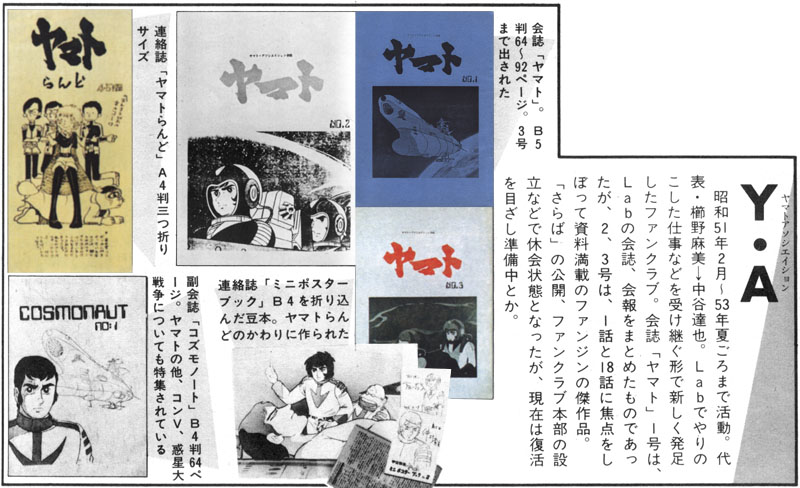 Nakatani: YA was focused on Yamato Land for a time.

Kushino: We ended up with a respectable 64-page fanzine that we typed out at 1000 yen a copy.

Nakatani: We spent quite some time looking for the best copy places.

Ito: Kushino’s group worked hard to limit the number of copies we needed to make. Who arranged that?

Komaki: Probably Mr. W. He went out of his way to get us six months’ worth of label sheets.

Kushino: Nowadays, everybody’s spoiled because they can sell things at the Comiket, but in the past it was hard because we had to write everything down by hand.

Komaki: Comiket wasn’t very large then, and the anime fans weren’t storming in to get their copies at the time, either. It just wasn’t that popular then.

Ito: Comiket is a marketing success now, with the second or third incarnation of Mr. W lurking out there! (laughs) 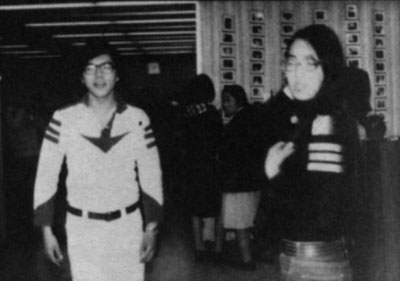 Yamato Association members at the 1976 Christmas Manga Festival
Interviewer: YA’s 2nd and 3rd volumes were great. They contained the scripts for episode one and eighteen, as well as original artwork.

Kushino: Inserting the script made things easier, since there was nothing to type. We just had to reduce the original and slap it onto the available space.

Ito: Can’t do that these days. With copyrights, it’s unlikely you’d get access to all the artwork and the originals.

Komaki: And on the other end of the spectrum, there’re already far too many anime magazines out there, flooding the scene with information. A good special-edition book would quickly make its way to the market.

Nakatani: Anime fans nowadays are spoiled, taking only the best items and getting their fill so easily.

Kushino: Yeah, they’re all hot for the latest and greatest, then drop it when something new comes along. Spoiled is right! (laughs)

Interviewer: So what’s in store for YA, aside from publishing fanzines?

Kushino: Movie showings. But instead of Yamato, we’ll be focused on Tatsunoko productions.

Ito: With the cooperation of the other anime clubs.

Komaki: We’re not just Yamato fans, we also like other SF anime as well. Tekkaman, Hurricane Polymer, Time Bokan, Gatchaman and many others.

Interviewer: So what became of the club? 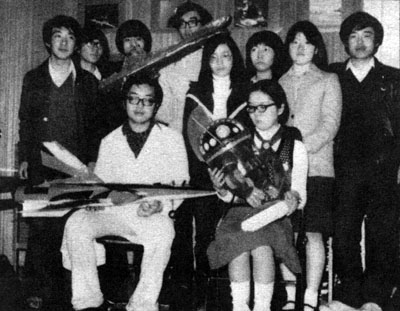 Ito: While assisting with the editing of the June [1977] issue of OUT, Mr. W became a semi-pro editor and began working on YA from the distance.

Nakatani: When the Yamato movie was released, we assisted with Office Academy’s promotional strategy.

Kushino: Mr. W and I were in our fourth year in college, and Nakatani was just entering as a freshman.

Nakatani: But I was starting to tire of the constant chaos during the release. Making the poster books and all the copies of the fanzines….

Komaki: Yamato No. 4 was far into its production at the time. It was going to be a Gamilas special.

Nakatani: With the anime ‘zines coming out, and Farewell to Yamato being released so suddenly, there just was a lot of pressure at the time. But YA is now coming back with its second wind, and more research into other anime as well.

Interviewer: Thank you all for your time.