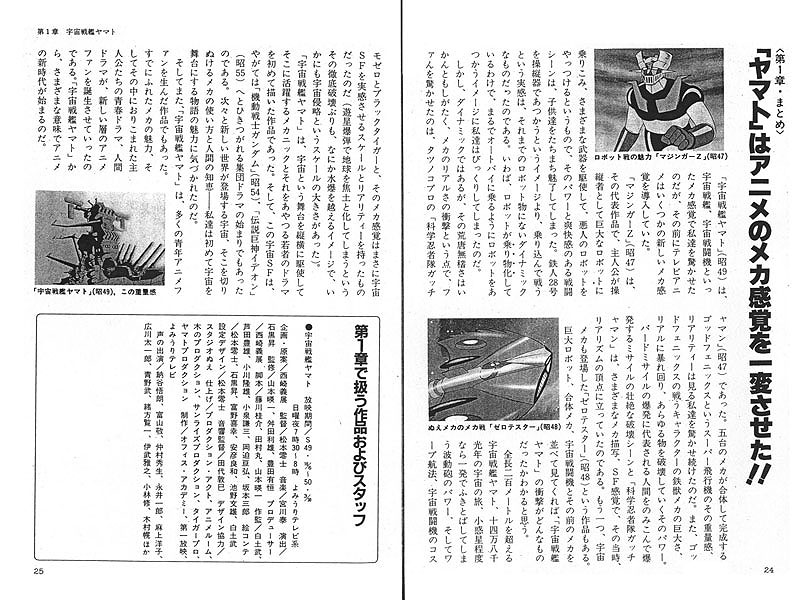 Although Yamato surprised us with new mecha concepts such as a space battleship and space fightercraft, TV anime had given us amazing new mecha before.

Mazinger Z (1972) gave us an iconic giant robot driven by a human pilot that made full use of powerful weapons to defeat enemy robots. Its exhilarating battle scenes instantly captivated young viewers. We had seen giant robots before in Tetsujin 28 [Gigantor], but it lacked the dynamism of this new approach. Now robots were vehicles, just like a motorcycle you could jump onto and save the world.

For all this, however, it was still somewhat absurd. We got a taste of reality that same year with the debut of Tatsunoko’s Science Ninja Team Gatchaman [Battle of the Planets]. In that show, the five main characters could combine their flying mecha into the immense God Phoenix, which had a great sense of weight and mass. This, plus the incredible power it took to destroy its iron-beast enemies, surprised us all over again and placed Gatchaman at the apex of realistic SF mecha-action.

Combining space-mecha took center stage again the following year in another SF series called Zerotester. The series was similar in concept to The Thunderbirds, with five super mecha standing in the way of alien invasion.

The impact of Yamato‘s mecha can be better understood when compared to these forerunners. The science fiction took on a new sense of reality when we saw a 200-meter-plus battleship take off into space with its powerful wave-motion gun, warp navigation, Cosmo Zero and Black Tigers on a journey of 148,000 light years. The enormous scale of the story was supported by the concept of a scorched-Earth H-bomb campaign, an act of aggression that could only be conducted on an interstellar stage.

Space Battleship Yamato took full command of that stage with a drama of young people and the mecha they relied on. It was also the beginning of ensemble stories in animated SF that inspired Mobile Suit Gundam (1979) and Legendary Giant God Ideon (1980).

The new world of space, the challenge to human ingenuity, the need for revolutionary mecha, all these elements together showed us the charm of a story set in outer space. Yamato was also the series that gave birth to a new generation of fans by paying more attention to the drama of a human life.

For these reasons and many others, a new era of anime began with Space Battleship Yamato.