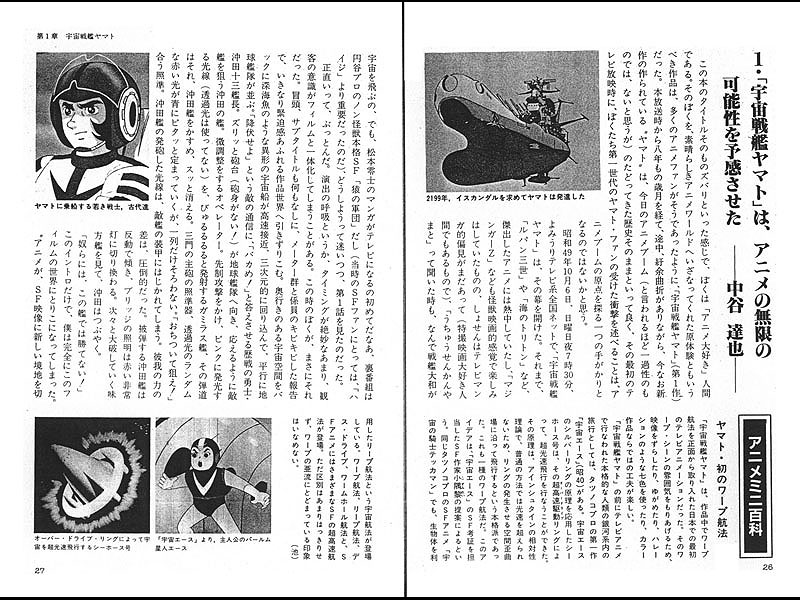 As this book’s title indicates, I’m in love with anime.

The prototypical experience that brought me (and many others) into this wonderful world was the first series of Space Battleship Yamato.

Eight years have passed since the first broadcast, and many things have happened during that time, including more Yamato. The origin of today’s anime boom (which some say is transient, but I disagree) can be traced back to the first Yamato series, which had a huge impact on the first generation to see it.

The curtain rose on October 6, 1974. It was Sunday night at 7:30pm on the national Yomiuri network.

Before then, I had been devoted to Lupin III and Triton of the Sea, and Mazinger Z was as much fun to watch as a monster movie, but I still preferred live-action special effects movies over ‘TV Manga.’ When I first heard the name Space Battleship Yamato I wondered why a battleship would fly in space, but it was the first time the work of Leiji Matsumoto could be seen on TV. On other channels there were programs like the live-action Monkey Army by Tsuburaya Productions, and the highly-popular Heidi of the Alps animated series. But I took a chance and watched the first episode of Yamato. 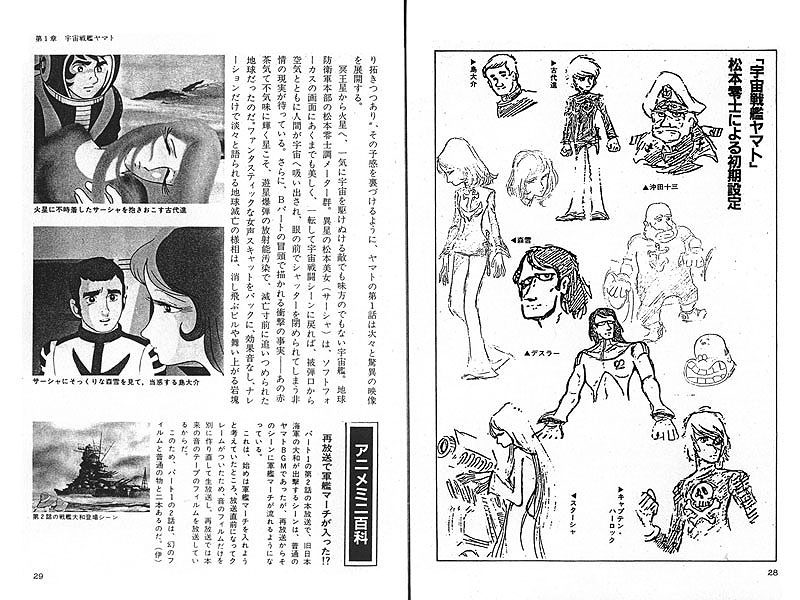 I have to admit, I didn’t get at first. There was no episode title, and we didn’t even see whoever it was reporting on the situation at hand. Then we were suddenly in outer space, and spaceships that looked suspiciously like deep-sea fish flew around in a tight, three-dimensional formation. By contrast, the Earth ships flew in straight, parallel lines.

A command to surrender came in from the enemy. “Idiots,” answered the veteran soldier, Captain Okita. Their gun batteries (with no barrels?) turned to face each other. An operator made small adjustments. The Gamilas warship fired a warning shot across the bow of Okita’s warship. His gunners took aim. Slowly, the indicator lights lined up. “Fire!” The beams shot across space and dissipated harmlessly off the enemy ship. The difference in strength on each side was suddenly overwhelming.

Okita’s ship was hit and began to roll. The bridge went to emergency lighting. The companion ships were hit one by one and exploded. Okita murmured, “we’ll never win with these ships,” and I was captivated.

This first episode showed us something entirely new, a cutting edge vision of science fiction with a sense of wonder.

A new ship appeared, not from either side of the battle, which could fly from Pluto to Mars in a flash. We were taken to Earth Defense Headquarters, a room filled with Leiji Matsumoto’s typical meters and scopes. More scenes took us to his beautiful alien beauty, Sasha. Her softly-focused image was thrown into abrupt contrast when we returned to the raging space battle. Earthmen were sucked into outer space on the wrong side of a cold, uncaring airlock. This was hard reality, indeed.

The second half of the episode brought the biggest shock. A weirdly-glowing meteor descended on a reddish-brown planet. It was the Earth(!), brought to the edge of extinction by radioactive contamination. The indifferent narration and the beautiful woman’s voice singing in the background were both sad and horrifying when coupled with silent scenes of unimaginable destruction.

(Editor’s note: the writer is describing the first episode as seen in its original form; these scenes were re-ordered in Star Blazers to place the opening narrative at the beginning.)

The extraordinary urgency of the episode’s first half suddenly made complete sense. The story was happening 200 years in the future, in 2199. A helping hand reached out into this hopeless situation from 148,000 light years away. We heard the voice of Starsha of Iscandar and saw her image, beautifully rendered by the hand of Leiji Matsumoto himself.

As the half hour drew to a close, Kodai saw the crumbling superstructure of the ancient battleship Yamato rising out of the dry sea bed. “Is that really Yamato?” The magnificent music rose in the background to conclude the episode. 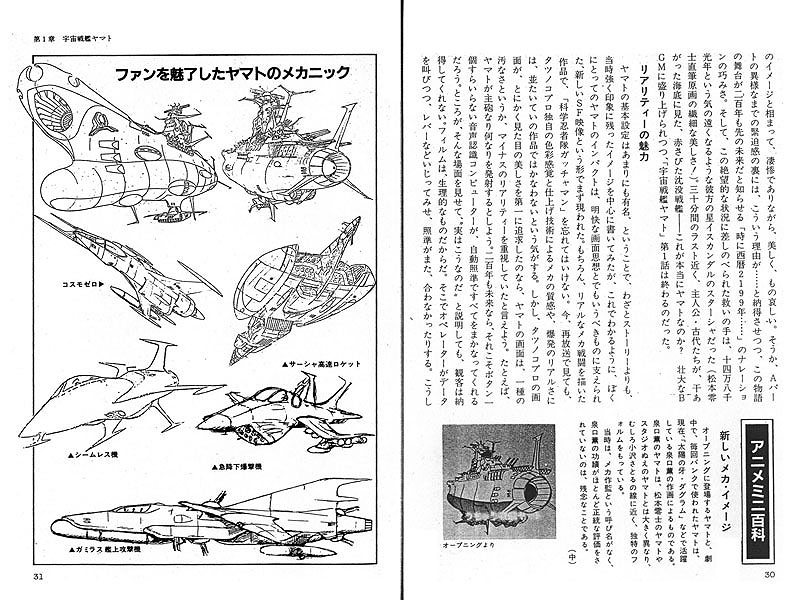 The Charm of Reality

The beginning of Space Battleship Yamato is now well-known, but by recounting its story so purposefully, I want to preserve the strong impression it made on me, the clarity of thought that I experienced from this new form of SF.

Of course, we shouldn’t forget the depiction of mecha combat in Gatchaman. Looking at reruns now, it’s obvious that Tatsunoko Productions had its own unique sense of color, texture, and explosive energy that is tough to match. Next to this, Yamato seems a bit clunky and antiquated.

For instance, let’s consider the firing of the main guns. 200 years in the future, no one would have to push a button. The computer could probably operate on speech recognition and aim automatically. But a viewer might not understand such a scene, even it is fully explained. Film is, after all, a physical thing.

Consider the operator at the beginning, calling out data readings and adjusting the gunsights with a lever. Reductive elements like that move you to familiarity, and the idea of a future technology with deficits enhances the reality of the situation. It’s important, especially in hand-made animation, to pin down such points for internal consistency from start to finish. In other words, as the fiction gets bigger, the subtleties of reality become more important.

Some may think all that elaborate detail is just somebody’s obsession, but there is a strong theory behind the technique. We can’t help but fall in love with a world that is so thoughtfully crafted.

“Sense of Wonder” is a well-chosen phrase in the SF world. There isn’t a suitable Japanese translation for it yet, but in brief it is that feeling you get when something revolutionary sparks your imaginative power and frees you from the bonds of your everyday life. Yamato was a treasure trove of such things, and the production staff understood exactly how to present it.

The first portion of Yamato we see is the stern section in the huge underground laboratory. When we’re taken to the bridge, this giant piece turns out to be merely the auxiliary engines. When the entire ship is revealed in episode 2, it moves slowly and deliberately, concentrating its fire on the enemy for a perfectly-staged debut.

In episode 3, the giant missile bears down on Earth during a parade that shows the determination of the crew. The trouble in getting the engines running and the slow climb out of the massive smoke cloud symbolize the difficult future that lies in store. 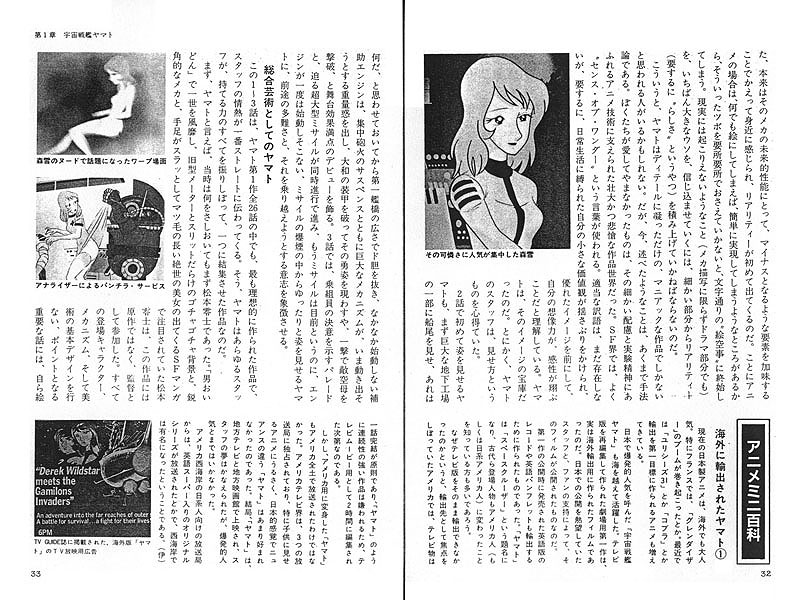 The comprehensive art of Yamato

The care and passion of the production staff that is evident in the first three episodes carries all the way through the series. You can feel the combined power of their work concentrated into each episode. First and foremost among them was Leiji Matsumoto.

Though strictly speaking he did not create Yamato, his sensibilities infused it completely; the sharp-edged machinery, the ribbed meters and gauges, the rail-thin bodies, the beautiful women with incredibly long hair and eyelashes, all of this made it a Matsumoto production. Character design, mecha design, paintings, storyboards, even the detailed descriptions of a mechanical process or an idea for a unique weapon all flowed generously from his own hand as if he was holding nothing back for his own manga.

But there were many things Matsumoto did not understand about the animation process, so Noboru Ishiguro was hired to assist him as the Chief Director, and the entire operation was overseen by General Producer Yoshinobu Nishizaki.

A long-time SF fan, Ishiguro brought many experimental techniques to the production, such as the use of ripple glass and masking effects, and his bold compositions were truly beautiful. He also had a strong understanding of the physics of zero gravity, and his style of weightless radial explosions helped give Yamato its own unique flavor.

Additionally, assistant director Kazunori Tanahashi kept close watch on the storyboard process and made a huge contribution to the production. Studio Nue [pronounced Noo-ee] was the principle design unit, interpreting Leiji Matsumoto’s concepts into fully-realized objects seen from multiple angles, building a vital bridge between Matsumoto and the animators. Their work forms the basis of the entire Yamato world and has filled many popular books. 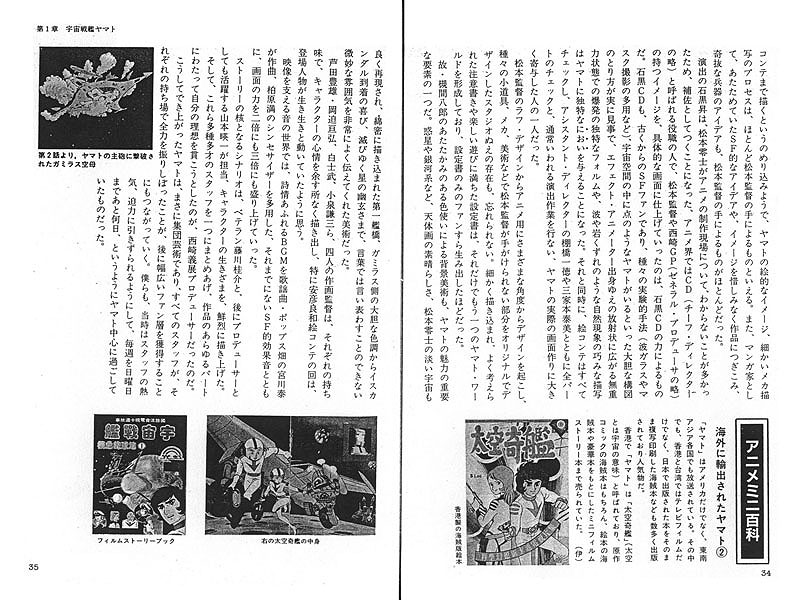 Another appealing element is the color design and quality of the background art. The spacescapes brilliantly captured the Matsumoto style, Yamato‘s main bridge was packed with detail, and the bold colors of the dying planet Gamilas gave way brilliantly to the bright, joyful tones of Iscandar. This work carefully conveyed a delicate atmosphere that is difficult to express in words.

Four directors supervised the character animation: Toyoo Ashida, Kenzou Koizumi, Hiroshi Wataru, and Takeshi Shirato. They were responsible for expressing the correct emotions and reactions of the characters, and their work shone especially brightly when combined with the lively storyboards of Yasuhiko Yoshikazu.

The music of pop song maestro Hiroshi Miyagawa overflowed with poetic sentiment. Together with the sound effects crafted by Mitsuru Kashiwabara, they brought at least three times as much life to the screen. Veteran scripwriter Keisuke Fujikawa preserved the core of the story, writing over half the scripts himself with the rest going to Eiichi Yamamoto, who had been part of the writing team from the beginning of the concept.

Finally, it was Producer Yoshinobu Nishizaki who brought all this versatile talent together and inspired them to do their very best. Yamato was a true artistic collaberation of many brilliant minds performing at the peak of their ability, pouring all their creative energy into the end product.

It was thanks to their powerful work that we spent every week counting down the days until the next Sunday night.