The days of my Yamato fan club 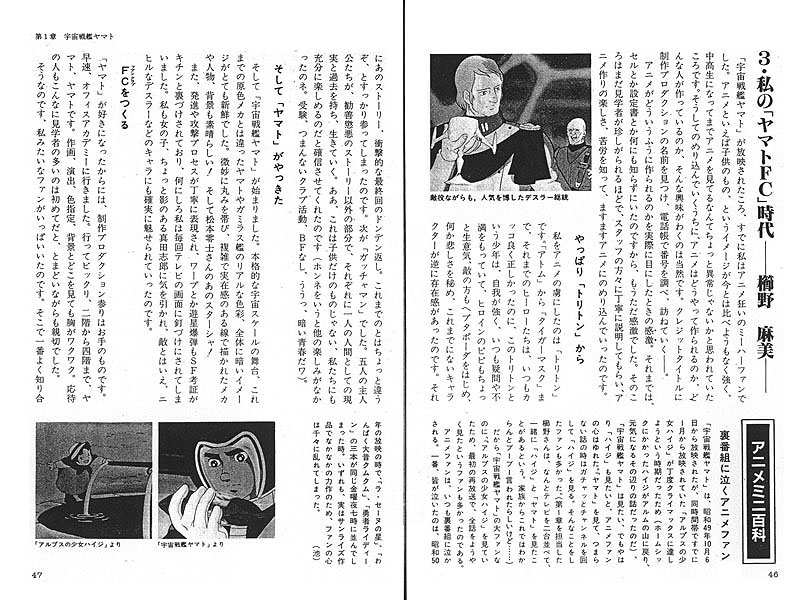 I was already a crazy anime fan when Yamato was first televised. Anime was considered just for children then, so it got me a lot of funny looks in junior high and high school. But it seemed natural to want to know how anime was made, and who made it so engrossing.

I checked the names in the credits and looked for them in the phone book. Anime inspired and excited me. I didn’t know anything about cels or model sheets, only my deep emotions. People like me were very rare then, so the experts on the staff politely explained it to me. The more I learned about the pleasures and the hardships of making anime, the deeper I sank into it.

It was Triton of the Sea that first captivated me. From Mighty Atom to Tiger Mask, the heroes were always better than everyone else. But Triton was a boy with a strong ego, and openly expressed his doubt and dissatisfaction. Pipi was impertinent and conceited for a heroine, and the enemies weren’t always beaten easily.

It was a complete reversal of what I was used to, and it made me give up the usual fare.

Gatchaman was next. There were five main characters, each with their own sense of morals and justice. I enjoyed it so much that no one can convince me it was meant for children. It made everything in normal life boring by comparison; exams, club activities, etc. (Oh, those dark days…)

And then came Yamato.

The first thing that struck me was the dark colors of the mecha, which were different from the conventional primary colors I was used to seeing. This plus the stellar scale gave the whole thing a fresh dose of reality. The subtle rounded lines and the detailed backgrounds gave the mecha a real sense of character.

In addition, the processes of takeoff and fighting were carefully explained, and the fiction of warping and planet bombs was properly supported by science. These were the things that kept me riveted to the TV screen.

As a female, I was drawn to the character of Shirou Sanada [Sandor] who had a bit of a shadowy past, and I was charmed by the nihilistic Dessler.

Because Yamato was my favorite, I wanted to know about its production, so I went to visit Office Academy.

I was surprised to see that Yamato occupied the second, third, and fourth floors. Seeing the drawings, the color markups, the background art, all made my chest thump. The receptionist was very helpful and said they were getting a lot of visitors lately.

So there were a lot of fans like me.

It was Mr. Nakatani who I got to know best. He was forming a fan club [Yamato Laboratory] that would publish newsletters to communicate with others (in other words, a lot of hard labor). To tell the truth, I didn’t like fan clubs very much. There was always a lot of loud, selfish chitchat. But where else could I find like-minded colleagues with the same joys and interests? I wasn’t there because of the fans. 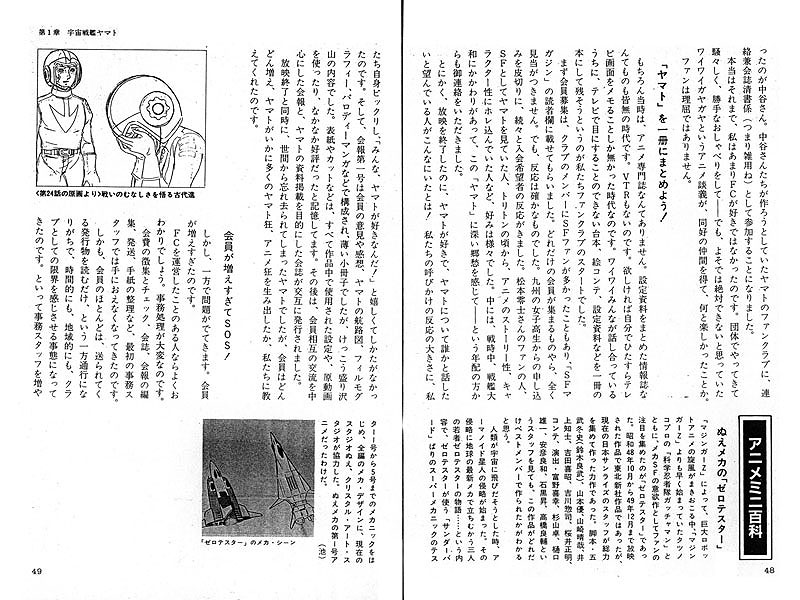 Collecting Yamato into a book!

Needless to say, there were no anime speciality magazines in those days. There was no such thing as a collection of model sheets. We didn’t even have VCR’s. All you could do was work diligently to take notes off the TV screen.

Everyone talked about collecting things into a book that we couldn’t see on TV: scripts, storyboards, and model sheets. Making a book would be the focus of our club. Some of our first members were SF fans, and suggested that we could recruit more people through the reader’s column of an SF magazine. We had no idea how many we would find, but the reaction was immediate. The first applications came from female high school students in Kyushu, and others arrived continuously.

Many were at the right age to enjoy Triton and were fans of Leiji Matsumoto, all deeply impressed with the characteristics of his work. We even received a letter from an elder who felt great nostalgia for the original battleship Yamato. Even though the series had already ended on TV, there were many people who still wanted to talk about it! We were all surprised at the size of the reaction and excited to learn that others loved Yamato as we did.

Our first newsletter consisted of the thoughts and opinions of our membership, a filmography and synopsis of Yamato, and a parody manga. It was pretty thin, but there was a lot of content. We used animation art for the cover, and it was very popular.

After that, the newsletter became a place for mutual interchange between members, and alternated with other periodicals devoted to data and information. Yamato may have been forgotten by the rest of the world, but the increasing number of members showed us how many fans there really were. 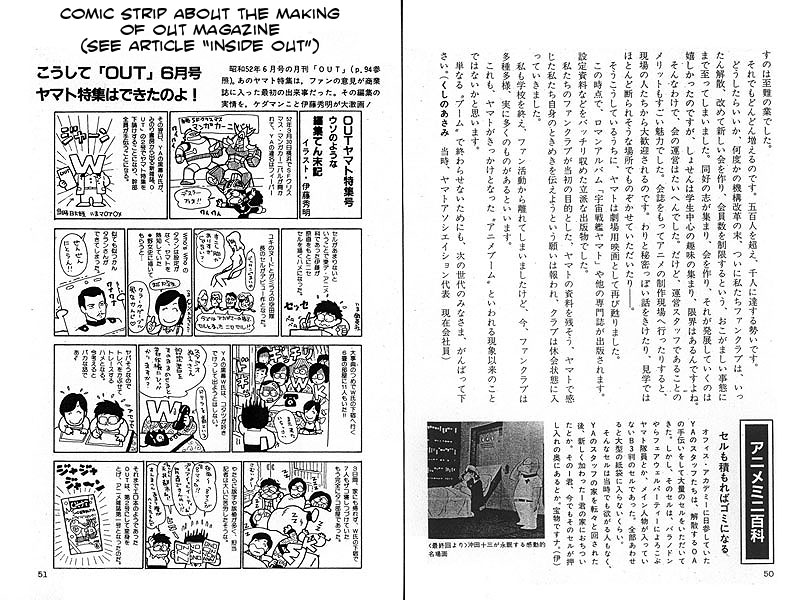 SOS! Too many members!

We had a growing problem: too many members were joining up.

Anyone who has run a fan club should understand this well. The amount of work was getting serious. Receiving and processing dues, editing and printing the newsletter, handling the mail; it soon became unmanageable. The majority of our members were those from other regions, and the local members who could help out were limited in number.

It was a Herculean task that only got harder when the membership went past 500 up to 1,000 people. We finally made the decision that we had to disband the club and start a new one [Yamato Association] with limited membership. It was great to find so many like-minded fans and fun to get together, but this was just a hobby, and there were limits. The meetings were getting too serious.

But it was great to be part of the operating staff. I was warmly welcomed whenever I would take one of our newsletters over to the production studio. It was like visiting a secret place, even though they never turned down a visitor.

While all this was going on, Yamato was being readied as a feature film to be shown in theatres. The Roman Album and other excellent magazines were eventually published. When Yamato Association finally dissolved [in 1978], we saw that our original purpose was fulfilled, and all our efforts were being rewarded as we adjourned.

I finished school and moved away from fan activites, but now clubs like ours are many and diverse. I think it was Yamato that triggered the new Anime Boom. I hope the next generation of fans will perservere and keep it going! 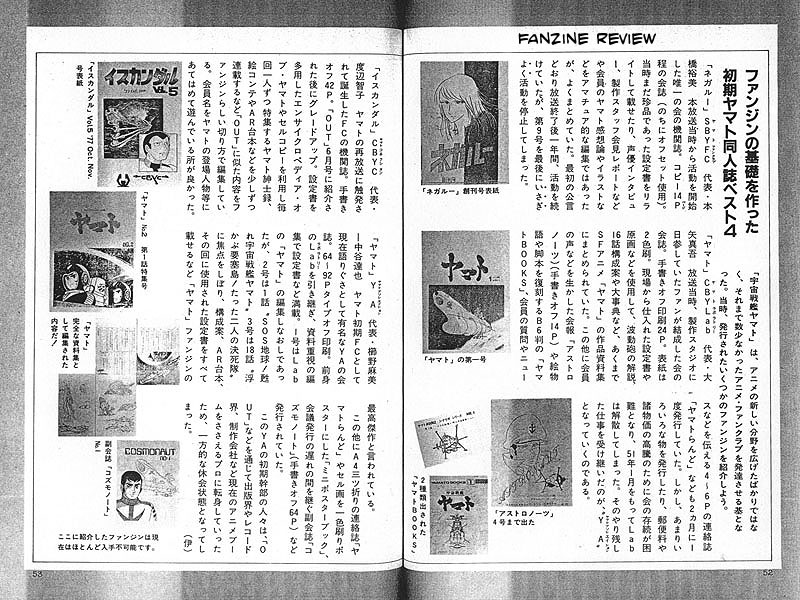