A scene on the Big Screen 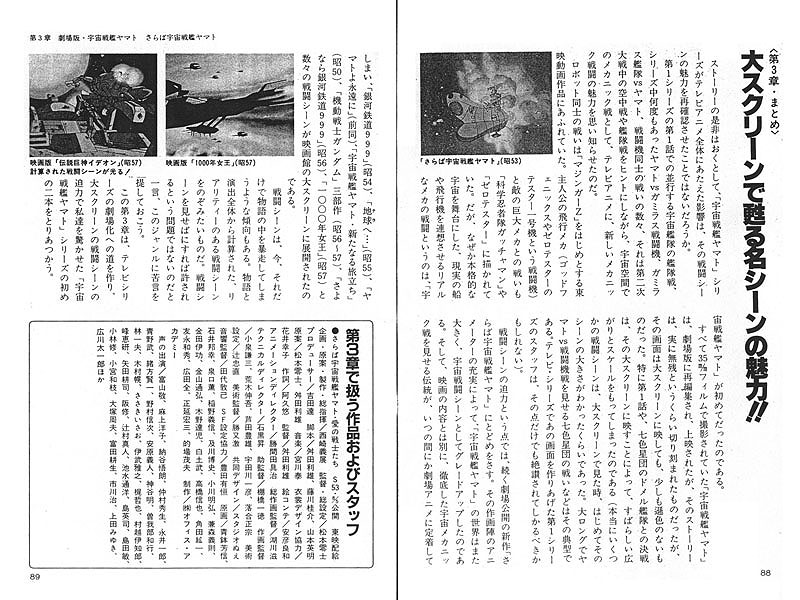 No matter how you view the story of Space Battleship Yamato, you have to agree that its most attractive feature is its battle scenes.

There are many parallels in the TV series to fleet battles and aerial dogfights from World War II, which added great charm and flair to the high-tech battles in outer space. Toei Animation Studio had already produced the energetic robot fights in Mazinger Z, and the mecha action in Zerotester and Gatchaman had great impact as well. But Yamato showed us for the first time what space battles between ships and planes might really look like.

Since the TV series was shot on 35mm film, it could be re-edited for theatrical release. The cuts to the story were brutal, but nothing was lost in the experience of seeing it on a big screen. The battle against General Dommel [Lysis] in the rainbow star cluster benefited greatly, taking on a much larger scale. Seeing it in this form made me understand its scope for the first time. It was a true classic, a tribute to the animation staff of the TV series.

Even greater battle scenes were to come in Farewell to Yamato, which upgraded the world of Yamato to even greater scale. Its production values set the standard for the many anime films that followed. Galaxy Express, Toward the Terra, Mobile Suit Gundam, Queen Millennia, and many more carried on the tradition of large-scale battle scenes. It’s already reached the point where we can take them for granted, and stories are being written to specifically include them.

This chapter is about how Yamato made the transition from the TV screen to the movie screen and surprised all of us with the force of its battle scenes.