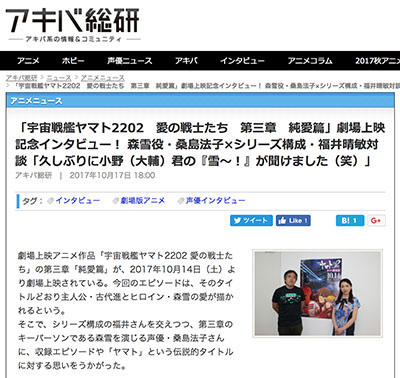 Yamato 2202 Chapter 3, Pure Love Chapter, premiered in theaters October 14. It can be said that the love of the main character Susumu Kodai and the heroine Yuki Mori is depicted in accordance with the title. Therefore, we asked for thoughts about the legendary title Space Battleship Yamato from Series Writer Harutoshi Fukui and Voice Actor Houko Kuwashima, who plays the key person Yuki Mori.

Interviewer: Ms. Kuwashima, what are your memories of Space Battleship Yamato?

Kuwashima: I knew the title, and might have seen it as a child, but it’s more of an impression. I watched Farewell to Yamato for the first time prior to recording 2202, and the development in the second half was sad. I was shocked about doing this, but Mr. Fukui said from the beginning that, “There is hope.” Because he said that, I’ve been saying it to myself during the voice recording.

Interviewer: What was your state of mind when you were cast as Yuki Mori? This Yuki Mori has a more mature impression than in the previous work. Was there any acting guidance from the director?

Kuwashima: I tried out for various roles in the audition, so I was surprised to hear that I was chosen for the main heroine, Yuki Mori. I didn’t have any particular instructions for the character. I also performed the role of Yurisha on 2199, and it may be the result of differentiating between the two of them. Yuki is depicted as a modern woman this time, so I’m conscious of being a character who modern women can identify with.

Interviewer: How did those around you react when your appearance on Yamato was decided?

Kuwashima: A lot of my seniors said, “I watched Yamato and decided to become a voice actor” and “I wish I could be on it” and “Jealous!” (Laughs) Animators I’ve met at other sites say, “I go to see it at the theater every time,” which should be expected, right?

Interviewer: Is there some pressure in doing that voice?

Kuwashima: Thanks to the passing of 40 years since the original work, I don’t feel much pressure. There are a lot of viewers from the generation that didn’t know Yamato, and the staff people say, “We’re making a new Yamato,” so I look at it as playing a new Yuki Mori. As for the role itself, when I get a script and stand in front of the mic, I feel like I naturally become Yuki. That’s how I always thought voice acting would be.

Interviewer: How is the atmosphere at the studio? 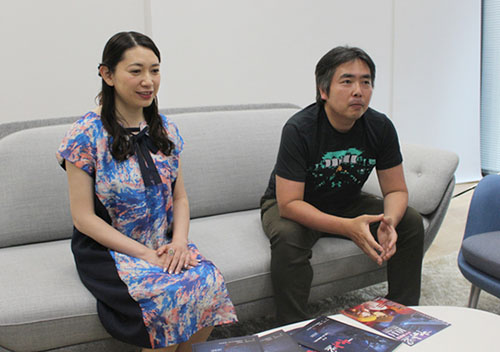 Kuwashima: Various people come together, from youngsters to veterans, and the performers are different each time depending on the episode. Every time I hear “this person is coming this time,” I feel a freshness.

Fukui: Among the veterans, Daisuke Ono is the main chairperson in the center of the recording booth. It’s always good when he appears, but sometimes I’m afraid to look when he comes in wearing a loud Hawaiian shirt or tinted glasses. It’s like a corner of Chinatown in there. (Laughs)

Kuwashima: You wear T-shirts with cute animals, don’t you?

Fukui: Because I’m in charge. (Laughs)

Interviewer: Are there any times you have difficulty in a recording?

Kuwashima: Battle scenes are quite difficult. When there are lines during an operation, they usually tell me, “Please be more tense.” And I think, “More than this?” (Laughs)

Fukui: Normally I don’t want the tension to be too intense, but since Yuki is in charge of the radar, it’s usually a starting point for a battle scene. Since it serves as the initial momentum, I often ask for it to be stronger than usual. 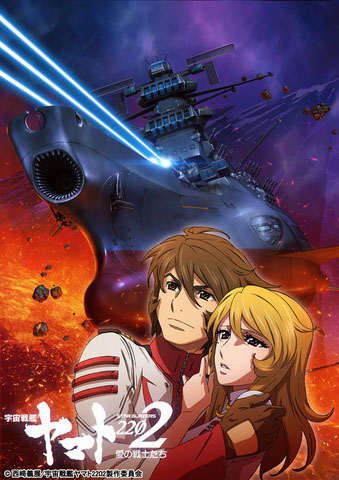 Interviewer: Please give me your impressions of Chapter 3.

Fukui: Up to now, it was either a continuation of 2199 or a remake of Farewell or Yamato 2, so I was trying to figure out how to sail through those three reefs, but where does the story go now that we’ve passed through them? I think this is where we indicate our destination for the first time. Please look forward to where the story goes from here. In addition, I had the space fireflies appear to tickle the older fans this time. It’s the first entry of an impressive thing from Yamato 2. The eleventh planet is there too, but only the name is the same and the content is different. The second and third versions of things are also being prepared further ahead!

Kuwashima: When I perform, I’m acting to visuals that are not yet completed, so there’s a surprise every time when I look at the finished product. At first, I was surprised at the title Pure Love Chapter. (Laughs) Therefore, I thought Chapter 3 was going to include the story of Kodai and Yuki again. And when I heard Mr. Fukui’s story in interviews that pure love isn’t always beautiful, it left a strong impression.

I was looking forward to an announcement concerning Yuki in Chapter 3 at last, and when I saw what was completed after the trial and error of voice recording, I think it’s an amazing work with the visuals and music. I hope the viewers share my feelings. Also, it was nice to hear Mr. Ono’s “YUKIII~!” after a long absence. (Laughs)

Interviewer: Finally, please tell me the highlights of Chapter 3.

Fukui: It asks, “what would you do for those you love?” and I think that’s good. I think the viewpoint is divided between men and women, but I can’t condemn Kodai’s choices. Women are more calm. Judging from a man’s perspective, Kodai couldn’t make that choice. Love is essential to some, while it can be violent or a deadly weapon to others. There’s the double-sided part, as in a suicide bombing done for the love of God. But living things can’t live without it. I want to depict both sides this time. 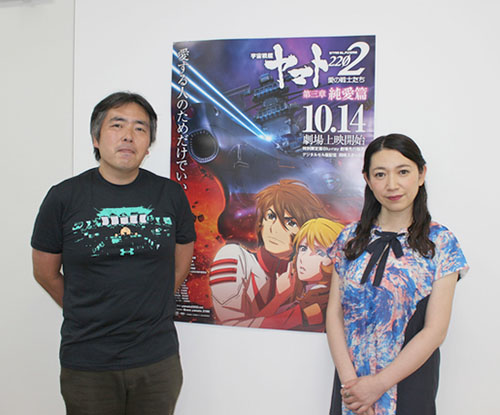 It works itself out this time, but what if it doesn’t next time? I think I want to continue depicting that from now on. After showing both sides, the living person comes to a place where it is possible to affirm love. The theme of this work is nothing less than “What is love?” I think it will come to a slightly different conclusion than the work of 40 years ago. If you had to talk about it again after 40 years in a world that was happy with never evolving, and if you were to relive what you felt at that time, for me it would become a plan to ask “What is life?”

Kuwashima: I think everyone in the audience will have to think about love. I don’t usually think about it much, but intimate love exists, and I think this work has made me realize that I am made up of it. I’m seeing it through the role of Yuki and it becomes painful. I want you to pay attention to how Kodai suffers over it. Kodai is gradually cornered by it and he can’t afford that, so these two people take action under these circumstances. It will make the viewers think about various things, so please talk about it after you watch it.