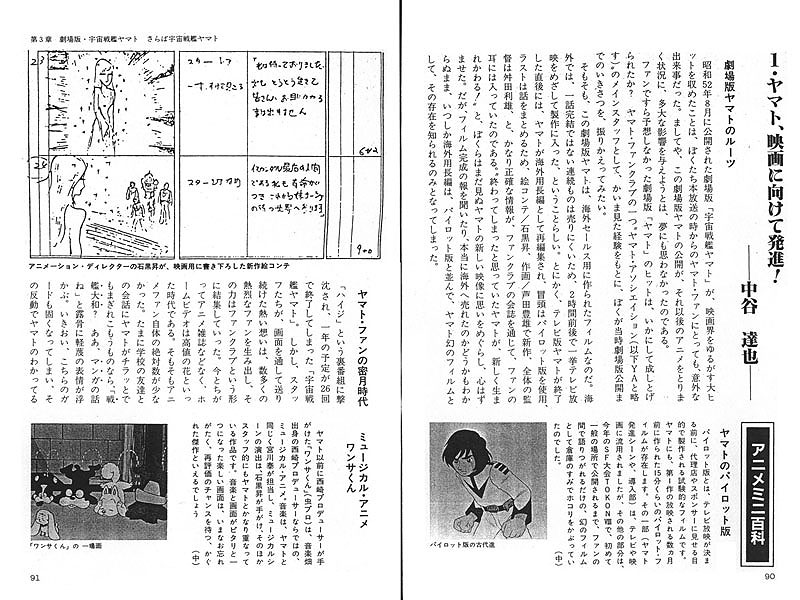 The Space Battleship Yamato movie, which was released in theatres August 1977, was completely unexpected by fans after the TV broadcast. Moreover, the enormous influence it had on the world of anime went beyond our wildest dreams. How did such a surprising thing come about?

Based on the experience I had as a staff member of Yamato Association, I want to look back at the circumstances of those days.

First of all, this movie was originally designed for overseas sales. It is difficult to sell anything to other countries that isn’t self-contained in about two hours, so in one fell swoop it became necessary to edit down the TV series.

The editing began immediately after the series was finished. At the time, we reported through the fan club newsletter that new scenes had been storyboarded by Noboru Ishiguro and animated by Toyoo Ashida, with Toshio Masuda managing the overall project. This information turned out to be quite accurate. Those who thought Yamato had ended for good were thrilled to learn that they had a new version to look forward to.

But since it was intended only for foreign release, we would probably not get to see it. 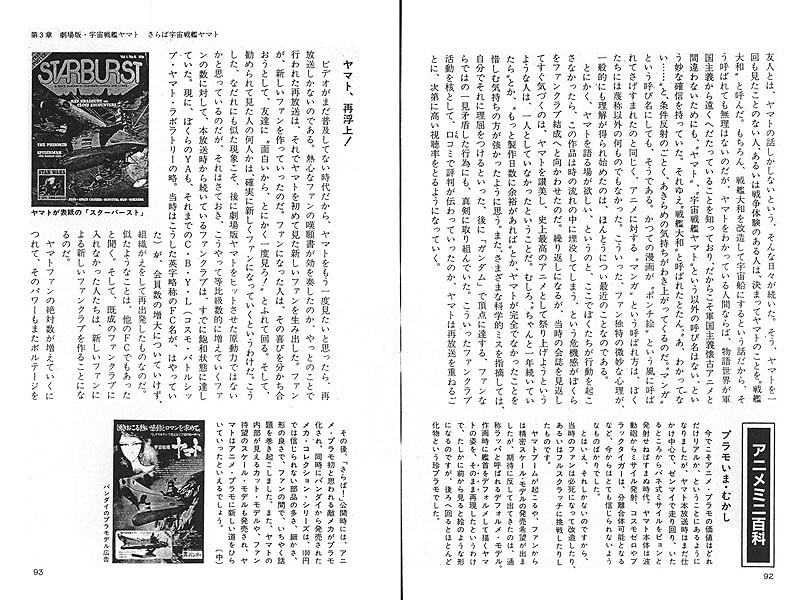 The dark ages of Yamato fandom

Space Battleship Yamato, which was originally intended to run for almost a year, was reduced to only 26 episodes when it was attacked and sunk by rival program Heidi of the Alps. But the passion of the production staff shone brightly through the TV screen and inspired many ardent fans.

It was a different time, bereft of home video and anime magazines, and fans were few in number. When Yamato came up in conversation with schoolmates, they would first think of the original battleship and then sneer with contempt when it turned out to be just a ‘TV manga’ story. As this continued day after day, it was hard to imagine finding any friends who felt differently.

Those who had war experience and those who had not seen the series regularly thought only of the battleship. Of course, it was SPACE Battleship Yamato we were talking about. Rather than a nostalgiac tale of militarism, the ship had been rebuilt to fly off into a very different kind of story.

That name conjured up a strange, inaccurate conviction that was impossible to overcome, so after a while we had to give up. The word ‘manga’ was rather derogatory, so it didn’t help either. Those fans who understood this subtle psychology were rare and unique.

In any case, we got the sense that Yamato was in an impending crisis and would be lost in the flow of time, so we decided to take action by forming fan clubs. When I look back at the club newsletters of that time, they are full of praise for Yamato with people exalting it as the highest achievement in anime history. Now I feel that if Yamato had gone to its full length, the feeling would not be as strong.

Some fans later insisted that anime did not reach its apex until Mobile Suit Gundam despite evidence to the contrary, and take any argument very seriously. With fan club activity at its nucleus, Yamato‘s popularity continued to climb from word-of-mouth support, and the ratings went up with each opportunity to see a rerun. 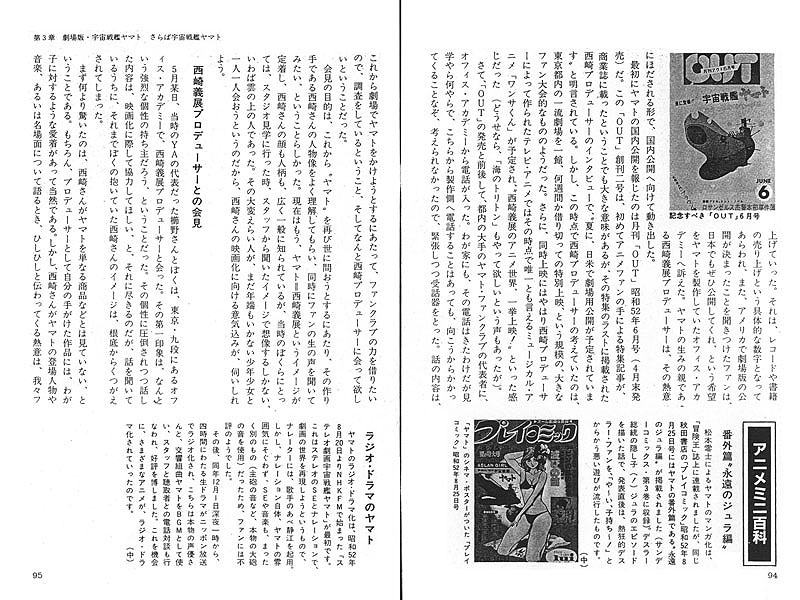 Because there was as yet no home video, the only way to see Yamato again was in the reruns. The petitioning of enthusiastic fans got more people to watch for the first time. Fans were making more fans. Anyone who became a fan instantly wanted to share their joy with friends, and told them to just watch it. Anyone who followed this advice would certainly become a fan as well, and start the cycle again. The phenomenon was like an avalanche. Whether or not it became the driving force behind the movie version, it kept increasing toward a saturation point.

Before my club was called Yamato Association, it was the Cosmo Battleship Yamato Laboratory (or CBYL; at the time it was fashionable to use English initials) before the membership grew too big and we needed a fresh start.

I heard there were other, similar clubs. Many of them could have been started by our previous members. The increase in the number of fans also increased the power and voltage. This was reflected in the sales of books and records, and increasing requests for Office Academy to share with us the overseas movie version. Overcome by this enthusiasm, Producer Yoshinobu Nishizaki moved closer to releasing it on the domestic circuit.

This was first reported in the June 1977 issue of OUT magazine, which was released in April. This was an important step, the first time special features had been produced by fans for a commercial magazine. In an interview with Producer Nishizaki, he declared that he was planning a summer release for both Japan and America. He was also thinking of having a special screening for fans at a first-rate movie theatre and adding Wansa-Kun to the program (though many of us would have rather seen Triton of the Sea).

At roughly the same time this issue of OUT was released, my telephone rang. It was a call from Office Academy in Tokyo to me, the representative of a major Yamato fan club. This was unthinkable! I was tense as I held the receiver. The story was that Producer Nishizaki was thinking about the movie release and wanted to conduct a survey. Lo and behold, he wanted to meet with me and “borrow” the power of a fan club!

He wanted to learn more about how the world viewed Yamato, and he wanted to hear it directly from an actual fan.

Mr. Nishizaki’s face and personality were already well-known, but I still had only a second-hand image of him that I’d gathered from the production staff on various field trips. I only imagined him as one of those people who floated above the clouds, so to speak. It was quite a thing for such a person to seek a meeting with enthusiastic young fans. 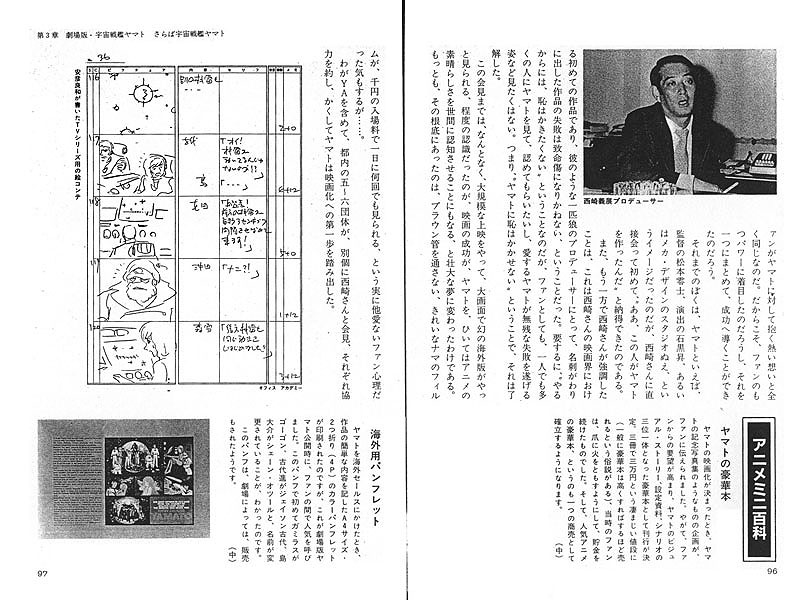 Along with Ms. Kushina, I met with Mr. Nishizaki in May at Office Academy in Tokyo. My first impression was that he had a strong personality. We were overwhelmed by the content of our conversation and the idea of cooperating with the movie release, but after a while my first impression was overturned.

We were surprised was that he did not see Yamato as merely a commodity. Of course, we naturally assumed that as the producer he would be attached to his project as if it were his child. But the passion that came out as he talked about the characters and the scenes and the music made him seem just like one of us. Therefore, he understood the power of the fans and believed that success would be achieved by bringing us all together.

Until that moment, I had assumed that Yamato was made by Chief Director Ishiguro or Leiji Matsumoto, or the designers at Studio Nue. Now that I was able to meet him face to face, I was convinced that it was Nishizaki who truly made Yamato.

He also emphasized that since he was a maverick producer, his first venture into the world of motion pictures could deliver a fatal blow if it failed. He would be ashamed if it came to that, if he failed the love and devotion of all the fans. In short, he did not want to bring shame to Yamato. I understood.

Finally, the big-screen version of Yamato met with tremendous success and international recognition, and contributed enormously to anime and to the public good. It was a magnificent dream come true. Some complained about the 1000Y ticket price, but that was just silly.

In addition to us, Nishizaki met on separate occasions with five or six other groups in Tokyo. We all promised our cooperation individually to help move Yamato one step closer to cinema screens.