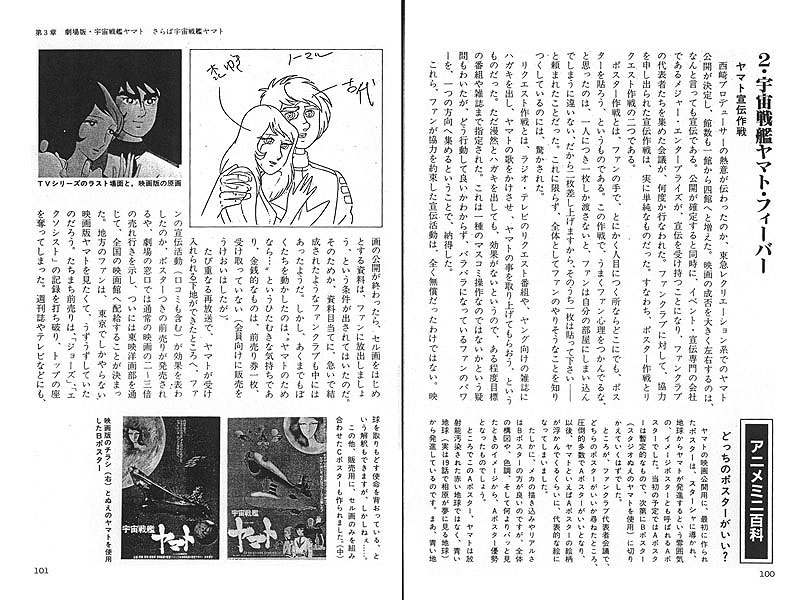 Once he began negotiating with the Tokyu cinema chain to carry the Space Battleship Yamato movie, Producer Yoshinobu Nishizaki’s infectious enthusiasm expanded the deal from just a single Tokyo theatre up to four. But this wasn’t enough. More had to be done.

If any single factor can be made responsible for the movie’s smash success, it was the promotional campaign. Until it was taken up by a major advertising agency, it was entirely in the hands of fan club representatives. Compared to the usual marketing strategy, their job was quite simple, consisting of a poster campaign and a “request” campaign.

In the poster campaign, fans were recruited to put posters up in public areas wherever they could find the space. Fully aware of the average fan’s mindset, Office Academy gave each participant two copies, knowing that they would want one for themselves. The official request was that they find a public place to post the duplicate. Unsurprisingly, fans were tireless in their efforts to comply.

In the “request” campaign, fans were asked to send postcards to newspapers and call-in requests to TV and radio shows for airplay of the Yamato themesong and anime series. It was later judged that the targeting of magazines lacked clearly-defined goals and so was not very effective.

Nevertheless, concentrating the power of the fans in this way was a groundbreaking experiment in mass communication. But they were not expected to work for free; each was promised a free animation cel from the Office Academy archive, plus one advance movie ticket per club. For most this was better than money, and new fan clubs were quickly formed in response.

In regions where this fan activity was highest or the TV series was in reruns, theatres recorded advance ticket sales at two to three times the number of the average film. This data proved to be the tipping point when the Toei Cinema chain took notice and agreed to distribute Yamato across the entire nation.

This was the news most fans had been waiting for, especially those who didn’t have the resources to travel all the way to Tokyo. What’s more, ticket sales instantly crushed those of two high-profile American films, Jaws and The Exorcist. TV shows and magazines picked up on the trend, and the mania of the fans became as big a story as the movie itself.

What was unexpected for me personally was my reaction to a preview screening, where I discovered that my idea of Yamato did not match what I was seeing on the screen. 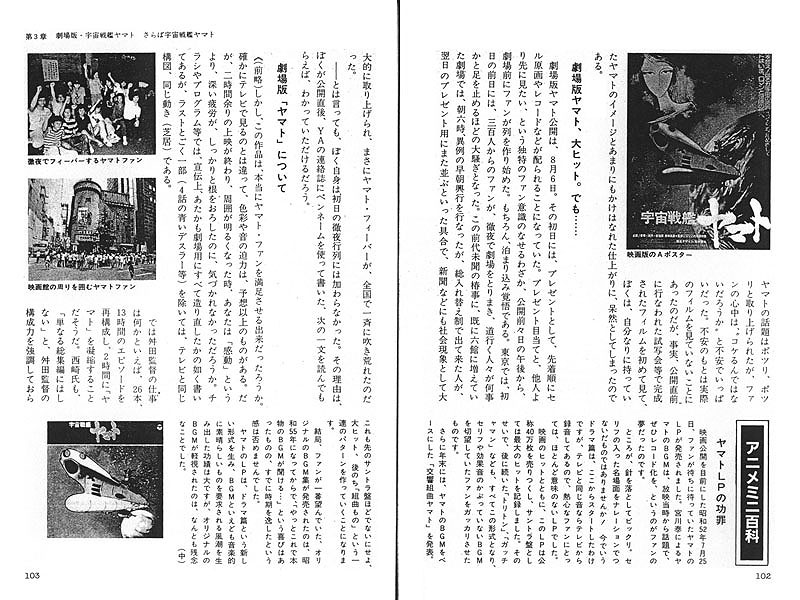 The movie was a big hit, but…

The Yamato feature film arrived in theatres August 6, 1977. Seemingly out of nowhere, fans began lining up the day before, apparently willing to sleep on the street for their favorite film.

One theatre in Tokyo was besieged by 300 fans throughout the day and night. They soon became a spectacle for many passersby, which only added to the uproar. By 6am on the morning of the 5th, six theatres reported lines around the block. News agencies quickly picked up on the story and “Yamato Fever” was suddenly a national phenomenon.

I, however, did not join this all-night vigil. To explain why, I’d like to reproduce a letter I wrote back then. I sent it to Yamato Association under a pen name. When you read it, you will understand why…

About the Yamato movie

Will this film truly satisfy Yamato fans, to whatever extent that is possible?

Certainly I expected the force of color and sound to make it different from watching Yamato on TV. But instead of being impressed when the lights came up after over two hours, I was just exhausted.

The ads, flyers, program book, and the like all stated that the movie would have the same structure as the TV series, excluding some questionable scenes like those in which Dessler does not have his blue skin. It was the job of Supervisor Toshio Masuda to somehow condense the 26 episodes down to just over 2 hours. Producer Nishizaki emphasized that Masuda’s skill as an editor would ensure that this would be more than just a compilation.

But I was disappointed in the finished work.

I thought many of the edits were strange. (Editor’s note: here the writer lists examples of scenes that he felt were compromised by clumsy editing.) My exhaustion came from being distracted by all of this. I didn’t get a complete impression of many scenes, and in the end it did indeed seem like just a compilation, cut down for the sake of time.

Even the portrayal of the characters spoils the image of the TV series. Kodai [Wildstar] seems rather heartless, not even reacting to the death of his older brother. His love affair with Yuki seems to come in only at the end, since we don’t see the flirting that was in episode 12. Shima’s role was reduced to that of a bystander, and Captain Okita only shows favor to Kodai.

Somewhere it fell through the cracks.

I was surprised by the new footage at the end, but disappointed that the film grain was so rough. (Editor’s note: this was due to budget restrictions. Read more about that here.) There was no real buildup to Okita’s death scene, so it doesn’t even seem to be worth mentioning.

Even though Yabu [Sparks] died in the TV series, he is shown on the bridge at the end as Yamato approaches the Earth. As for that scene, stock footage was used to save money, which caused one scene to point in the wrong direction. It was optically flipped, reversing the background painting of Earth.

The LP record and the radio drama have built up Yamato‘s popularity, but I think this movie will give it a bad reputation. It should not have been made.

I’m sorry for the length of that quotation, but this was my first impression, written as the release of the movie was coming up fast. Eventually I realized that this event was not staged just for me, a longtime fan. The magazines described it as the beginning of a phenomenon, and that would last long after the movie closed. 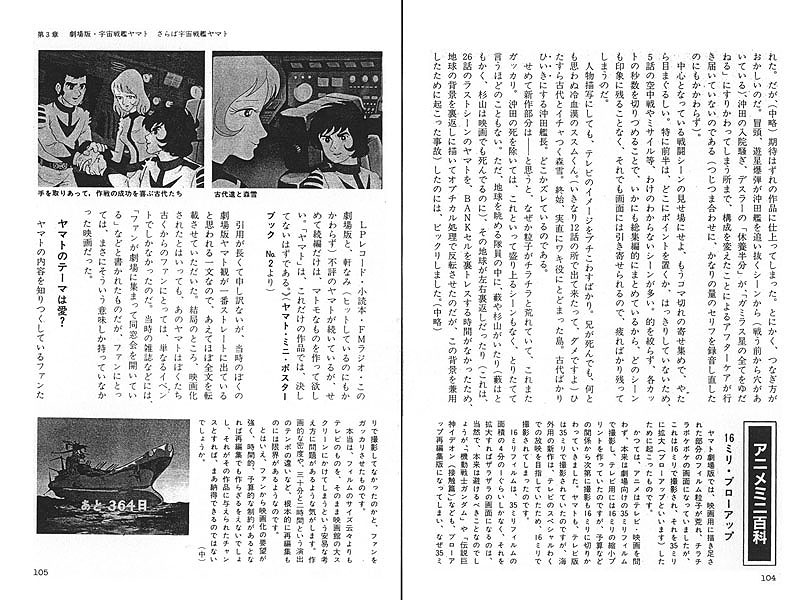 Is “Love” the theme of Yamato?

Though many fans of the TV series weren’t happy with the movie, those who were seeing Yamato for the first time must have been amazed. For one thing, it was much easier to watch, since anyone could say “hey, let’s go see it” at any time.

In retrospect, the making of this movie was the most effective way to start a ‘fan avalanche.’ Prior to this, studios didn’t have much confidence in anime movies since no one knew if they would meet with box office success. As a result, many suffered from a lack of internal support. They were poorly made, and of course they failed.

But the Yamato movie mobilized over a million fans and grossed over 9 million yen. Nishizaki’s unparalleled success in mass-communication elevated him to the position of an industry leader.

So here is what I have come to think…

In the beginning, he stated that he made Yamato with the theme of “love, adventure, and romance.” Later he shortened his words, and now “the theme of Yamato is love” has become the common catchphrase. Certainly, love is an important part of the Yamato story.

When Kodai said in episode 24 that “we shouldn’t have fought them, we should have shown love,” and when Mamoru decided to stay with Starsha in episode 25, I understood it clearly. Love is the most important thing to human beings. Without it, none of us would be born. But since Kodai’s line from episode 24 was shortened in the movie, and all the expressive scenes from episode 26 (animated by Toyoo Ashida) are deleted, the theme is missing from the core of the story. Kodai and Yuki’s relationship just seems like a contrivance.

As a word, “love” is very ambiguous, and can be stretched to mean just about anything in a dramatic story. For example, you could imply that it describes the love of life, and the desire to protect the Earth. Or, as in Farewell to Yamato, you could be asked if you would fight and die for the love of a single person. The meaning keeps developing.

It’s possible for dangerous ideas to be wrapped in such rhetoric, and people who value emotion over logic can miss the contradiction. The Pacific War could be considered an example of this.

I might be over-interpreting it here, but Yamato has some inherent incongruities. I think it’s a big mistake to get caught up in beautiful catch phrases and follow them without thinking carefully about their deeper meaning. 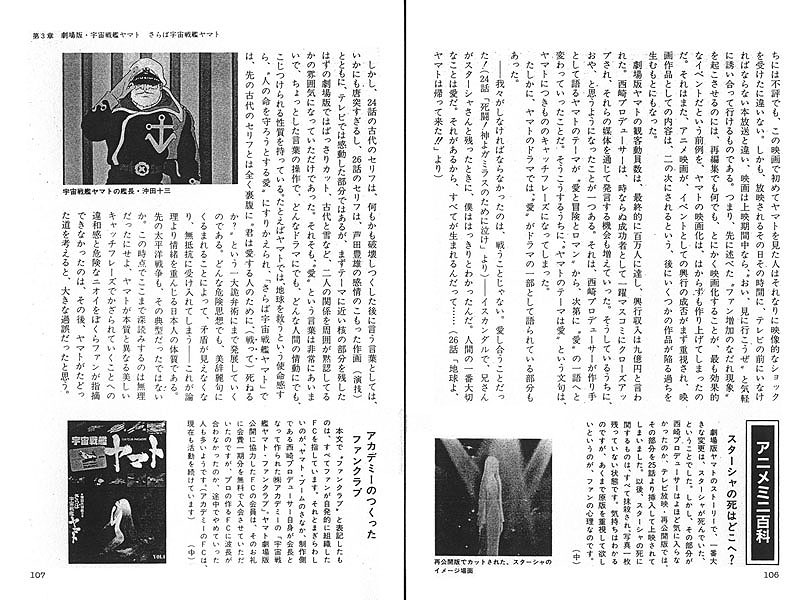