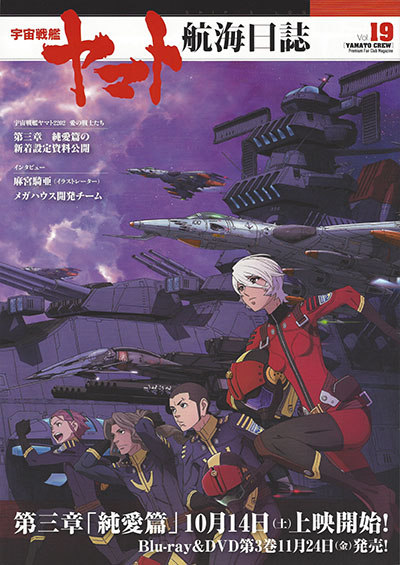 The boy who ran around with a homemade target scope on his bicycle helmet grew up to become a developer of the Cosmo Fleet Specials and the Yamato Girls Collection. We talked with Kouji Takakura, who produced many Yamato products for Megahouse

PROFILE
Born in Shizuoka, 1969. Started in a sales position for Bandai affiliate Angel, which made candy toys. Worked on product development after a merger with Megahouse. Dealt with high-age products, the masterpieces of which were the Space Battleship Yamato series and New Century GPX Cyber Formula series. 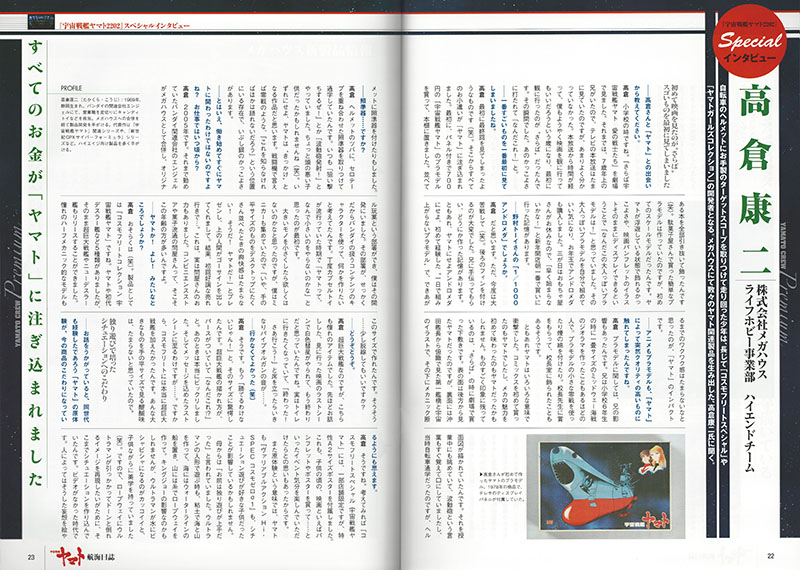 Interviewer: Please tell us about your first encounter with Yamato.

Takakura: It was back in elementary school. I saw Farewell at a theater. Before that I occasionally watched the TV broadcasts with my brother, who was seven years older, but I didn’t understand it very well. After some time passed after the broadcast, I was finally old enough to go see a movie, and Farewell was my first. That was the moment. I was struck by its coolness and said, “What is this!”

Interviewer: You saw the most amazing thing first.

Takakura: It was like seeing the last inning first. (Laughs) From there, I poured all my pocket money into Yamato. First, I bought a 700yen Yamato model with the panel and put it on my bookshelf. I pulled out all the books in order to display it. (Laughs) It was just a simple plamodel I bought at a candy store, but it was my first scale model. It was cool to display Yamato in a floating position, and I thought the picture depicted it like, “Look at this grownup plastic model!”

Mr. Takakura’s first Yamato plamodel. It was a high-class 1978 product that included a Teresa display panel.

I felt like I could build an adult plamodel by myself, so I bought Andromeda with some money I got as a New Year’s gift. I remember going to buy it first thing in the morning at the start of the new year, but the toy stores were closed for the first three days of the year. “I want to start now!”

Interviewer: Was it the 1/1000 Andromeda model by Nomura Toys?

Takakura: I think so. But I had a really tough time with it. (Laughs) It was hard to attach the rear fins. I remember my older brother helping me and it got built somehow. Anyway, it was the first time I experienced Andromeda and Yamato. I learned that “a plamodel can’t be finished in one day,” and my excitement was unbearable until it was finished. That was the impact of Yamato.

Interviewer: You were suddenly touched by Yamato with high quality in both anime and plamodels, weren’t you?

Takakura: My older brother’s influence was also there with plamodels. He was a person who made a diorama of the Battle of Midway when he was a 6th grader. He attached cotton smoke to little Zero fighters, and I heard that he won a prize from the principal, and it was displayed in the principal’s office.

Anyway, Yamato made an impact in various ways. The first manga I ever bought was Yamato, and it might be that I tasted the appeal of mecha for the first time with Yamato. There was a plastic sheet that I bought at the theater with Farewell that made a big impression. On the front was Yamato seen from the rear and on the back was an illustration of the first bridge and space seen from Captain Okita’s point of view. A mechanic section was drawn below that. I looked at the art and immediately learned the term Wave-Motion Gun. I rode my bike to school at the time, so I attached a sighting device to my helmet.

Takakura: I taped a sighting device up on the rim of my helmet and rode to school. I always said, “I’ll shoot!” or “Wave-Motion Gun, fire!” I might have been kind of a dope. (Laughs) In any case, Yamato became my “trigger.” It was like Zero combat if you’re talking about fighter planes. “If you don’t know this, you won’t know about that.” There was a coolness in having a position of special knowledge.

Interviewer: Did you get involved with Yamato as soon as you started working? When did you start?

Takakura: In 2005. Angel, the Bandai-affiliated company I worked for, merged with Megahouse. A department was established for original candy toys, and I was there in development. That department was special, because it used characters from content handled by Bandai, and I wanted to make something. Capsule toys were popular at the time, so my first thought was, “Why don’t we do a small Yamato thing?”

I wondered if a big thing could be made small because I was also a collector of minicars. “No, the refreshing feeling when you line up a bunch of palm-size things on a desktop is irresistible! That’s it! Yamato!” I gave a presentation, and the bosses gave me a go-sign. As a result, the first sales were good. Actually, I also had the power of a wholesaler. There are a lot of wholesaler deals of moderate age in convenience store and confectionary distribution.

Takakura: Probably. (Laughs) It was the Space Battleship Yamato Cosmo Fleet Collection. There were five items, including Yamato and the first Dessler battleship. I was also able to release the Dreadnought and the new Dessler battleship [in later sets], and I could make a cutaway mechanic model at that size. Oh yeah…may I digress a bit? 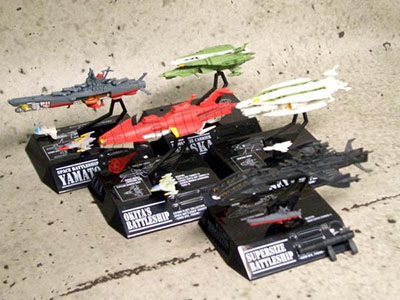 Takakura: The Dreadnought was also a coveted item. When the White comet was destroyed at the end of the movie, I thought it was all over. Actually, I wanted to go the bathroom. “It’s over, let’s go!” As soon as I stood up, there was the sound of the pipe organ…

Takakura: That’s right. I was astonished at its size. “It’s impossible to win against this!” I was really surprised by how the pass of the Dreadnought was drawn. “What is this!” Then it came to the last scene with the message…so I really wanted to add the Dreadnought to the Cosmo Fleet. There’s a real thrill of seeing such a big thing at palm-size. I thought it would be irresistible.

Commitment to the situation cultivated by solo-play

Interviewer: When I hear stories about the prototypical Yamato experience in this generation, there seems to be a commitment to the products.

Takakura: That’s right. In terms of the Space Battleship Yamato Cosmo Fleet Special line, a characteristic A2-size poster was included in some limited stores. As for this, when I was a kid I bought the movie program book and poster…it was because I enjoyed the feeling of an event.

And in terms of the prototypical Yamato experience, there is the Variable Action Hi-spec Cosmo Zero Alpha 1, which may have been influenced by my favorite childhood experience. My mother said, “You were good at playing alone.” When I played with Ultraman dolls, I’d make a sea and mountains out of clay. The sea had ships in it up to their waterline, and I made a mountain ropeway with thread. It may be the King Joe influence, but Ultraman had a cool aesthetic for kids when he splashed in the water. I wanted to reproduce the image of Ultraman caught on the ropeway and falling, so I built it up as well as I could. That was a time when there was no video, so some people turned their imagination into pictures and cartoons while I reproduced them with clay and toys. 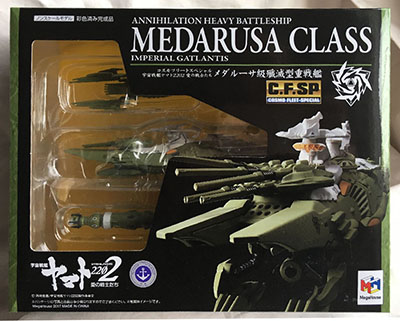 Therefore, I put an emphasis on recreating that situation with the asteroid ring on Yamato and the Cosmo Zero with a catapult and a Yuki Mori figure. On the Medaluza-class Annihilation-type Heavy Battleship, in addition to a removable Flame Strike Gun, there is also a scale Deathvatator.

Interviewer: it’s like wish fulfillment. It’s on a small runner, which reminds me of old scale models that came with small airplanes.

Takakura: I think there are ways to enjoy something on an individual basis after you buy it. I think about, “I want to display it this way,” or “Not everyone may want to do it that way.” It could be said that I’m pushing my own taste, I guess. (Laughs) But I’ll be happy if you buy it and not notice that two or three hours have passed since you opened the box! Food has an expiration date, and there is something like a time limit to play with a toy, and I want to make a product that can stand up to it.

Interviewer: The Cosmo Zero can replicate the storage form and attack form…there is no other finished product in this size. And it’s crowned with the name “Variable Action High-spec,” which is Megahouse’s top mecha category brand, isn’t it?

Takakura: That’s right. For me, it’s my first single airplane product. There is already a well-done Cosmo Zero model kit from the hobby division, and when I was supervising I wanted to reference it. The answers were there in a way, but for a finished product we have to pay particular attention to weight and painting with diecast metal. Two colors are needed for silver, to give it a bold metallic texture. And actually, the parts painted in matte are also diecast. And we’ve included transparent stickers for decals to use as you like. And the catapult mentioned earlier is included separately from the pedestal.

Interviewer: On the other hand, the Yuki Mori Private Coordinate Version figure was also released as a new product in September. It’s a substantial series, but are the challenges different from mecha.

Takakura: They are. There is the point that it’s decided with a prototype, but it would be the same even if it was made as data. By the way, all the prototypes I’m in charge of are made in analog. My position is somewhat temperamental, so I often say, “That’s a bad angle in a good way” (Laughs) or “Why that scenario?”

Interviewer: Do you have sharp eyes for how to make beautiful women in three dimensions?

Takakura: My business partners and I consult the camera. As a result, we use cameras more often, and I look at a subject through a viewfinder more often. That experience is reflected in the photography on the packaging. Also, a prototype is useful to see how sex appeal is transmitted to the user from line of sight. The figure pose is always a point of concern. It’s good if there is a scenario that gives an impression of the story, but it may be unsuitable for a product. I imagine the character’s pose and gesture, and sometimes I consult with the designer. I also reference poses from pinup models and idols. Even if you look at K-pop idols, you can find a pose you might not normally conceive.

I want to answer everyone with a message of “things”

Interviewer: Finally, please give a message to the readers of Yamato Crew.

Takakura: For myself, I’d like to say “I’m one of the fans,” and I’m here now on behalf of the fans. I might be exaggerating my role a little, but I’ll say “I make the things you want.” I hope I can answer to you through the message of “things” that I work on today. It is work, so money is definitely attached, and the story goes that you shouldn’t mix that with hobbies and fun, but I feel that if this isn’t your favorite thing it’s not possible to implicitly transmit anything. Since I’m a Yamato lover, I’d like to keep making things that say, “This person gets it.” So If I do some strange thing, I’d be happy if people say, “Ah! This was made by that guy.” (Laughs) 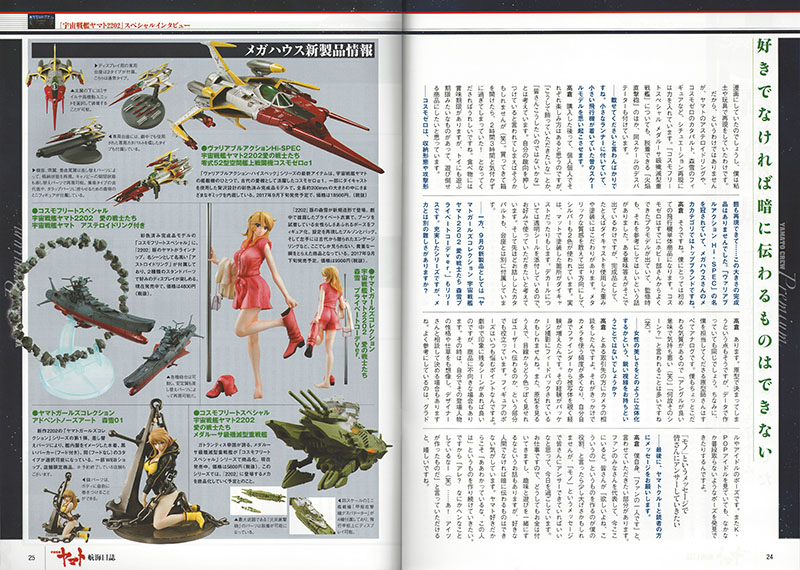