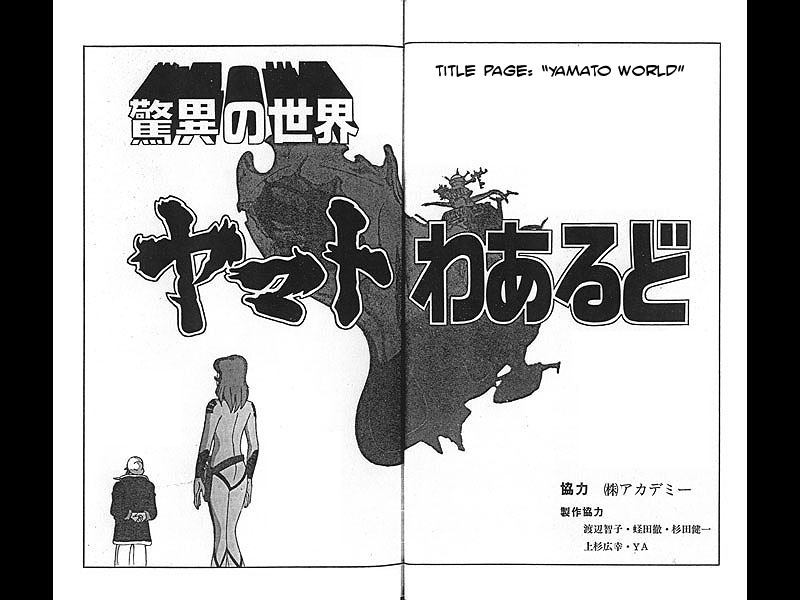 When talking about anime, it’s still most likely that people will fondly remember Mighty Atom [Astro Boy], Iron Man 28 [Gigantor], or 8 Man [Tobor]. Today, few make the distinction between a hero anime, science-fiction anime or one based on pro-wrestling.

But there was one program that showed us a dream of romantic adventure that was completely absorbing: Space Battleship Yamato.

Here the team has created never-before-seen features, not the sort you would find in a typical boy’s TV magazine. We wanted to take a look back and see how much this dream is loved by today’s generation. Now its charm can be conveyed to those of you who do not yet know about Yamato.

Does the color cover revive the image of Yamato? Do the color pages help you to recognize it?

We will retrace the story from the first episode, including all the famous ‘how many days are left’ captions at the end. It should help you to remember, but you can probably grasp the basics even if you haven’t seen it.

Next will be the Who’s Who of Yamato. You won’t find the typical hero of a children’s magazine in it, though. Rather, there are both friends and enemies that may only have appeared briefly along the way. They are all here because they fought a battle for life and death either for or against Yamato. Their names and some of their memorable lines have been extracted from the story to give specific points of interest.

The research was a lot of work, but we loved doing it.

Next there is a large encyclopedia that spotlights everything in Space Battleship Yamato.

But this only looks at the 26-episode TV broadcast. What about Yamato‘s past? What of its future? What were the intentions and ambitions of the producer? We talked about the beginning and the ending with Office Academy President Yoshinobu Nishizaki for a sensational article that starts our coverage here and returns to finish it later. 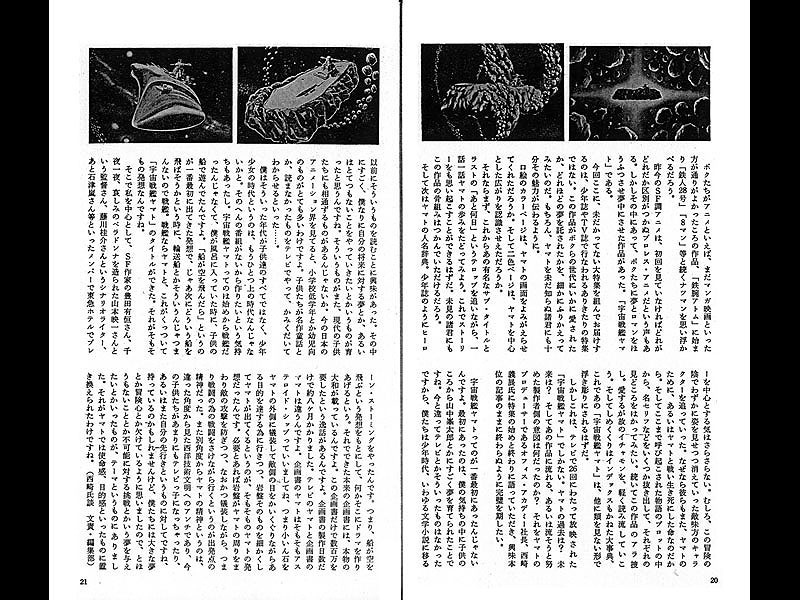 The connection to Space Battleship Yamato did not come all at once. First there were my childhood dreams, living among the mountains. There was no such thing as TV, so I read novels. They instilled me with great dreams of the future, and the incredible things I could do when I grew up.

I think it’s the same for the children of today. But when I look at the state of the Japanese animation industry, most of it seems directed toward elementary students or very young children. With TV to distract them, they aren’t reading the classic tales that grip you and force you to understand things. They won’t be prepared for adulthood the way my generation was. There wasn’t a TV program that addressed that, so I felt that I had to create one.

It didn’t start out with the idea of a spaceship, but instead one that could fly, like a child might fly a toy boat around the bathtub. “A ship that flies,” that was the first idea. But what kind of ship? Probably one that carries troops, a carrier or a battleship. This brought up the idea of Yamato, and eventually the title of Space Battleship Yamato. That’s how it got started.

I lead some brainstorming sessions at a Tokyo Hotel with SF writer Aritsune Toyota and anime producer Eiichi Yamamoto. We called in scriptwriters Keisuke Fujikawa, Arashi Ishizu, and others. The entire story was founded on the idea of a boat flying through the sky.

The genuine Yamato appeared in our original proposal book. It took us eight months to develop and produce it. There is an anecdote that it cost tens of thousands of dollars.

But the Yamato that came to TV was different from the one in the book. The original title was Asteroid Ship, since Yamato was encased in bedrock to hide from the enemy, and used smaller rocks as a defensive measure. It was mostly designed to avoid battles and get where it was going.

We knew that bringing back Yamato could be seen as an anti-Western sentiment. But today’s children are becoming the TV generation, and for the sake of my own future I wanted to instill in them the grand dreams and adventurous spirit that we seem to be lacking these days.

To replace emptiness with a sense of duty, mission, and purpose; that was the theme. Yamato had to show them how to meet an extraordinary challenge with the power of their dreams.


Return to OUT Magazine main article