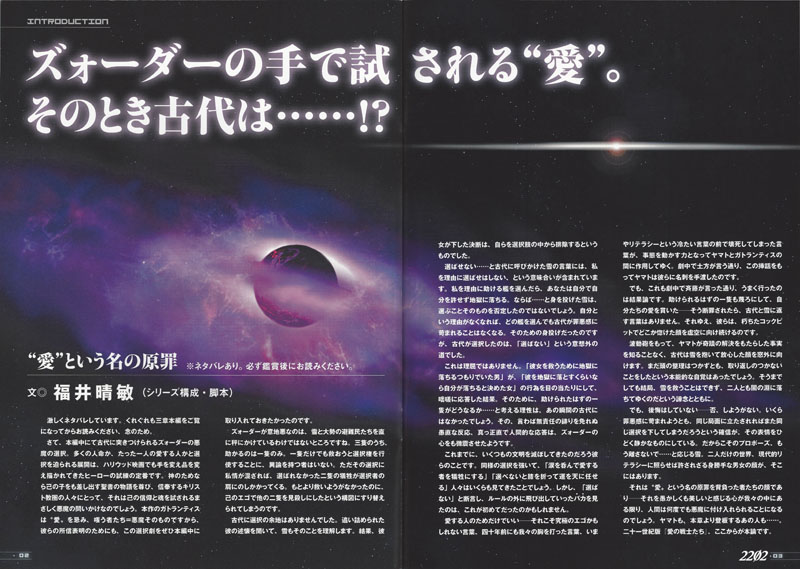 From the Yamato 2202 Chapter 3 program book. (See it from cover to cover here.)

“Love” according to the hand of Zordar. What of Kodai…!?
Original sin, thy name is “love”

(Contains spoilers. Be sure to read after you enjoy the film.)

This is an intensive spoiler. Just in case, be sure to read this after you view the chapter.

The demon Zordar forces a choice on Kodai in the main story. It develops that he is forced to choose between many lives or only that of his loved one, a staple trial of the hero as depicted in Hollywood movies. It also honors the biblical story of giving up one’s child for God. For those who believe in Christianity, it is the devil’s question to test your faith and soul. In this work, Gatlantis abhors “love” because the evil characters are equal to devils and I definitely wanted to use this drama of a choice to express their beliefs in the main story.

Zordar is not cruel for directly comparing Yuki with a large number of refugees. Only one of the three ships can be saved. Not a single person objects to the option of being able to save only one ship. When personal feelings are mixed into that choice, the sacrifice of those who aren’t chosen weighs on the shoulders of the chooser. He originally wanted to save them all, but the composition is changed so that two ships are forced to go for the sake of his ego.

Kodai has no room to choose. Yuki understands that as she hears his pronouncement, and as a result she decides to eliminate herself as one of the choices.

I won’t let you choose…that is her gesture toward him, which includes the implication that he will not let her choose. “If you choose a ship for my sake, you will never forgive yourself and you’ll fall into hell.” Then Yuki throws herself off to deny him the choice. If she removes herself as the reason for his choice, Kodai will no longer be tormented by guilt no matter which ship he chooses.

Due to her throwing herself off, Kodai’s choice becomes the unexpected path of “not choosing”. This is not logical. As a result of witnessing “the man would fall into hell to save her,” she responded instantly as “the woman decided to fall rather than plunging him into hell.” What happens to the one ship that should be helped by it…? At that moment, Kodai doesn’t even think about it.

That act, which one might criticize as irresponsible, is quite frankly an entirely human response, and it seems to shake Zordar’s heart slightly. So far, they have destroyed many civilizations. When faced with a similar choice, they’ve seen countless people “Swallow their tears and sacrifice those they love” or say “Unless I choose, I resign myself to having my knees broken.” However, this may be the first time “I will not choose” has been asserted and some fool jumped outside the rules.

Just for the one you love… those were the ego-driven words that touched us forty years ago, words that have gone cold in the face of today’s literacy. They have the power to move the situation between Yamato and Gatlantis. As the workers say in the drama, it’s in this episode that Yamato hands over its business card. But as Saito says, it’s the result of a lucky guess.

The assumption that they’ll be saved by a single ship runs through their love, and it’s with that conviction that Kodai and Yuki do not exchange words. Because of that, even in that rotting cockpit, they still go on toward empty space with dazed faces.

Kodai holds Yuki and looks out the window in a daze without knowing that Yamato brought about a miraculous solution with the Wave-Motion Gun. But despite this, there seems to be an instinctive awareness that something irreparable has been done. After all, there was no way to save Yuki and they were both resigned to falling into an abyss of darkness.

But he has no regrets – it can’t be helped. No matter how much he is tortured by a sense of guilt, I believe he would make the same choice again, which is quietly stated by his expression. So he proposes to Yuki so they will not be separated again…and Yuki accepts.

If you illuminate the world of just the two of them with modern literature, there you see the faces of an unforgivably selfish man and woman. It is the face of people who carry the original sin named “love” – as long as there is a heart in us that feels foolish and beautiful, humans will pay their dues to the devil again and again. For Yamato, and those taking the plate from this chapter on… The main theme of this 21st century Soldiers of Love begins here.