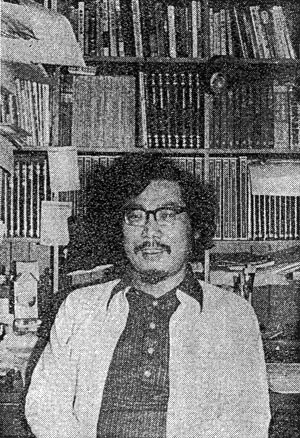 In those days, Yamato was everything

Interviewer: Yamato was a wonderful series, but it gave you many harships…

Ishiguro: It was painful, uphill work. It was like climbing Nishizaki’s mountain, which everyone called Yamato. We had a lot of fights and met a lot of obstacles. Some on the staff had nervous breakdowns, and I seriously thought about quitting three separate times, but when I look back at it now, I think we achieved something really good.

Yamato was the first anime I had participated in from the very beginning, so that’s why I devoted all my energies to it. I was determined to do as much as possible. And I also really wanted to do an SF series.

Interviewer: You drew manga before you entered the world of anime.

Ishiguro: I was born in the same year as many people who make manga, including Leiji Matsumoto. I used to be in a school club devoted to cartooning, and I made my debut at 17 when my book Wandering Children of Space was published. It was a little like Yamato, so I was able to adapt to the Matsumoto style. That was definitely a plus.

Interviewer: It’s been said that sea stories and space stories aren’t popular in anime. Didn’t that worry you?

Ishiguro: I had heard such rumors, but was not concerned about it. Our time slot was right after Calpis Theatre, so I didn’t think it would hurt our ratings. Even if we only got 10% it would be hip-hip-hooray! But the only thing I thought I should care about was making something I liked.

Interviewer: The first episode seemed quite fresh compared with conventional anime. Was there a special technique?

Ishiguro: I had already been thinking about things I wanted to do on an SF series. I wanted to try an optical composite, where the foreground and background move separately. You see it in the first episode when the Gamilas fleet flies toward the camera and when Okita’s ship flies toward Mars. You see it again at the end of episode 3 when Yamato flies away from the mushroom cloud. 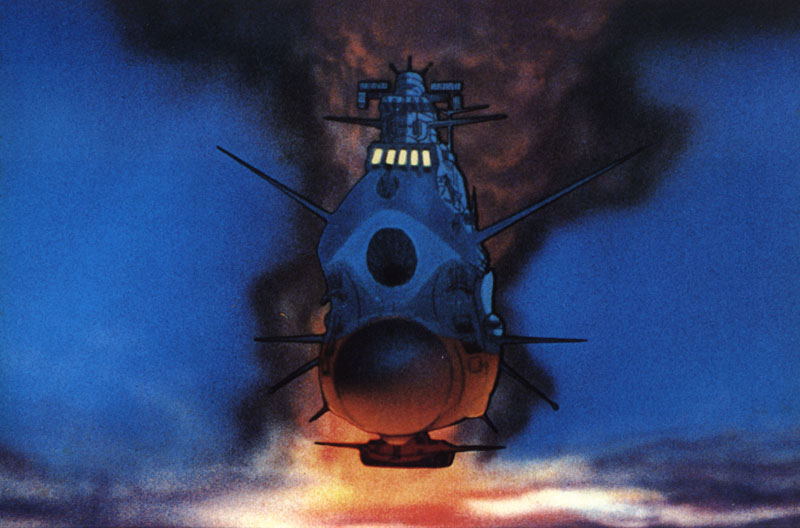 If it’s done properly, it has a very clean and smooth movement, but it’s complicated to photograph because it requires masks. It took an entire day for just one scene and cost about $3,000. So we couldn’t do it as often as I wanted.

When the laser beam from the Gamilas hits Okita’s ship in the first episode, I wanted it to tilt and roll, so it wouldn’t just sit there as one drawing. There were many elaborate moves like that.

A hole gets blown in the ship, the crew gets sucked out, and in the storyboard a one guy was shown grabbing the edge of the hole, so the emergency hatch stays open. When the scene was done, I thought it would be more effective if the hatch closed right in front of his eyes. The animator was furious, saying “I drew it according to the storyboard!” So I agreed to redo it myself.

There were so many retakes it doubled the workload. We took twice as much time and did twice as many cels as we should have for episode 1. It was impressive in the end, so it was worth it to us, but it went way over budget and we had to observe more restrictions on the time and money.

Interviewer: When you look at the characters throughout the series, particularly Kodai, it seems the relationships were thin at first.

Ishiguro: That’s true. Up to around episode 12, I felt like we were preoccupied with elaborate props and settings, and the writers weren’t doing very much with the humans. That’s when Eiichi Yamamoto started to participate more and moved the focus to character drama. There were some who complained that Yamamoto didn’t know anything about SF, and I said “you’re reading in the dark!” (Laughter)

During the 2nd story arc, we learned that the ratings were not very good and we would have to eliminate the 3rd arc, which featured a rivalry on the Gamilas side. Hiss and Dommel would struggle against each other under Dessler. But we had to cut our costs, so we lost all that. I wanted to do a thorough job with it, so I was disappointed.

Interviewer: Wasn’t there supposed to be a revolt by Sanada [Sandor] and an appearance by Captain Harlock?

Ishiguro: That was a mistake. Mr. Yamamoto mistook Tokugawa [Orion] for Sanada. There was a scene at about the halfway point when he would take over the bridge and incite a rebellion.

Interviewer: Wow! So Tokugawa was going to lead the revolt instead of Yabu [Sparks]? Come to think of it, there was a scene in the storyboard of episode 17 when Okita was ill and it was recommended that Tokugawa be made captain. That didn’t get on TV, though.

Ishiguro: That’s right. I thought the foreshadowing was a little strange. Afterwards, Yamamoto said he got it wrong; he meant to say Sanada! (Laughter)

We also had to eliminate Captain Harlock when the 3rd arc was cut. Mr. Matsumoto wasn’t happy about that.

Interviewer: What was the reason for the change in Gamilas skin color?

Ishiguro: It was for the simple reason that the terran skin color was not very interesting. We tried out various colors and though there was some resistance we decided to go with blue in episode 11. We wanted to give the feeling that he was moving out of a colored spotlight, but it didn’t come out well on TV.

Interviewer: It was said after a while that Yamato owed its success to the charm of Leiji Matsumoto’s work, but I felt strongly that there was more to it. What do you think about this?

Ishiguro: If Yamato gives off a different impression than other anime, isn’t that because of the producer’s point of view? If it’s a company production, usually the views of individuals in the organization are averaged out in the end. That’s why so much anime seems the same, and the personality of the producer does not shine out.

Mr. Nishizaki is the type to run a one-man system. Sometimes this can be a bad thing, but it’s possible to have a good result. All the biggest Hollywood blockbusters these days are the vision of one producer. Mr. Nishizaki surrounded himself with a staff and told us his vision of Yamato, and it gave us all a way to focus our thoughts. That’s a good example to follow. I’d like to have that job! (Laughter) 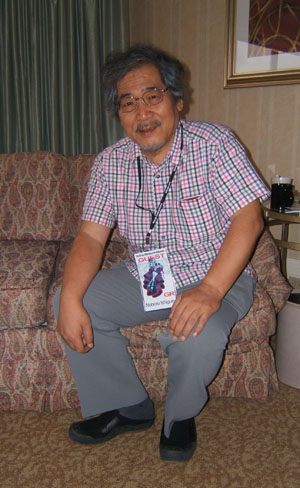 Interviewer: What did you gain for yourself from working on Yamato?

Ishiguro: I really enjoyed working with Mr. Matsumoto and the very competent artists at Studio Nue. His mecha design is one thing, but the power they brought to it gave it real life. The combination was perfection. After Yamato, it will be very hard for me to work without that.

And all the animators were great people. I would want to work with them again by all means.

Read a 1975 interview with Ishiguro here

Read a 1992 interview with Ishiguro about the second series here