A talk with Isao Sasaki, who sang the Yamato theme song 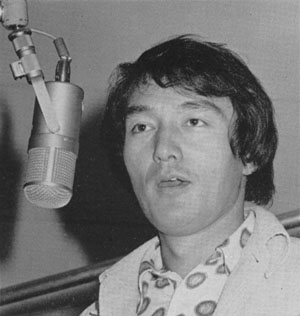 I want to challenge Yamato again!

Interviewer: You’ve sung many anime themes. Which is your favorite?

Sasaki: I’m often asked that. I have to go with the Yamato B side [The Scarlet Scarf]. I think it’s great. It was enormously difficult. Every time I sing it I become more tense. It’s a tough one.

I want to try it different ways, but they might sound strange. The hardest part is actually the interval, when I have to pause and then come back in. The interval is the real test! (laughs)

On the other hand, it’s good because it gives a husky edge to my voice. Sometimes it’s good to go against your training, because you learn something new. Every singer is a sort of actor, which is quite a different calling.

It’s good to pay attention to the critiques of your fans, since they know what they like best, but that’s not the only way to test yourself. I want to meet the challenge of the Yamato songs again and again.

Sasaki: But it’s worth it. Yamato is magnificent. It gathers up all the hopes and prayers of mankind as it flies away from the Earth. A picture alone is not enough to express that. It needs that main theme song to build up energy and reinforce the monumental scale. But you don’t get to hear it properly in a small space, or if you listen to it on a cassette or something. That’s why I think this movie was meant to be. It will sound really good.

Conversely, The Scarlet Scarf is from the heart of one lone man. It says, I’m a just a small man and I can only do so much, but someone is waving to me and that gives me strength. It captures the viewpoint of someone looking out into the vastness of outer space with a sense of romance. It isn’t about the fate of the Earth, just one person standing between the intimate and the infinite. 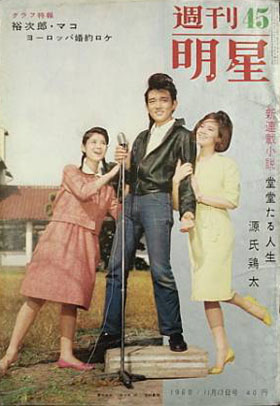 Sasaki on the cover of Weeky Myojo magazine

Interviewer: There were different version of the Yamato theme.

Sasaki: Yes, one starts with the very slow ‘Sa-ra-baaaaa…’

Interviewer: It seems like the fans have their pros and cons about it.

Sasaki: There’s no difference in the visuals, but the songs bring a different sense to them. One is tragic and the other is more epic. I think it’s good to have both.

Interviewer: Like the difference between a warship march and an anthem?

Sasaki: Yes. In a certain sense, a warship march can be very sad. It is seemingly heroic, a gallant warship going off to fight, but it may not come back, so it could be an enormous tragedy. Do you see the difference?

The Yamato theme has that feeling.

Interviewer: What was your favorite voice-acting work?

Sasaki: In anime, it’s a toss-up between Gatchaman [Battle of the Planets] and The Great Battle of the Flying Saucers. (Editor’s note: this was the pilot movie for UFO Robot Grendaizer, part of a 1975 Toei film festival) After that, Star Trek.

I don’t know if that gets good ratings, because it’s on at 9 in the morning. I think it would do better at night, when people are feeling a little more romantic. I think my work on it is okay, but not spectacular. American scripts are very good at exploring the themes of a story, and I am deeply impressed with them.

There’s a big movie in America right now called Star Wars. It speaks strongly to people’s sense of uncertainty for the future. I think it’s wonderful.

Sasaki: That’s right. Most people who first heard me in Yamato did not recognize me from Condor Joe, it seems. My name [in the credits] was spelled in Kanji before, but in Yamato it is spelled in Hiragana. So the singer is different from the actor. That way I attract attention from people who like different anime. 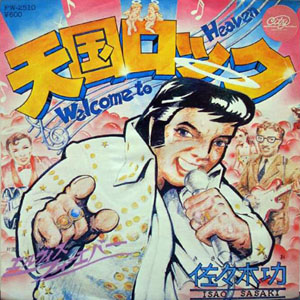 An Elvis tribute single by Sasaki, 1976

Interviewer: What was your first voice-dubbing role?

Sasaki: It was for an Elvis movie called Flaming Star [1960]. My first regular TV work was Detective Strange on NHK.

Sasaki: Film acting is more difficult for me, since I have to also be a photographic subject. A voice actor only has to focus on their sound. It makes a big difference when you are also on camera. I think a voice actor only does about one-third as much work.

(Sasaki continues the interview with a long discussion about the techniques of film acting vs. voice acting, but we will close here.)

Read another interview with Sasaki here.