The Seven Wonders: Q&A With Analyzer 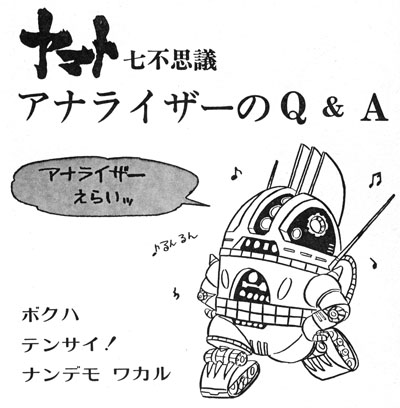 The skin color of the Gamilas was the same as Earth people through episode 10, then it changed to blue in episode 11. Why is that?

Answer: In humans, iron is a constituent element in the blood, which gives them a red pigment. In Gamilas people, that constituent element is copper, which produces a blue blood cell. But the question was, why did the skin color change during the story. What you didn’t see was the space warp Yamato made between episodes 10 and 11 which went wrong and jumped the ship into a parallel universe where Gamilas have blue skin. Another theory has it that the Gamilas initially turned pale when they saw Yamato approaching.

In episode 22, Domel [Lysis] blows off Yamato‘s third bridge. It is perfectly repaired when episode 23 starts, but by the end it is dissolved off by the acid sea of Gamilon. Then it’s back again when Yamato arrives at Iscandar. Why is the third bridge so important? Isn’t it just ornamental? 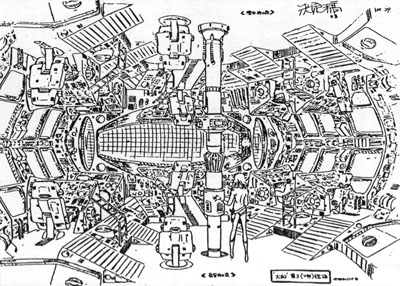 Answer: The interior of the third bridge is designed symmetrically for equal access whether it is under the ship or above it. When Yamato dives underwater, it can flip upside-down for the third bridge to become the command center. However, if that were its only purpose, it would not need to stick out of the belly where it can be easily broken off.

The true purpose of the third bridge is to give Yamato the attributes of a seagoing vessel in addition to being a spaceship. Naturally, it is expected that while on a voyage, Yamato might have to descend to a planet’s surface. If it had to land with that big body, what would be the most suitable place? The ground would provide too many hazards. Since Yamato was remodeled from a seagoing battleship, a liquid environment would be the most accommodating.

But then you would have to get off the ship somehow. For that, it has to be stabilized in the water. That’s what the third bridge is for. That’s why the crew was in such a hurry to restore it. I’d tell you where they got the parts, but that’s classified.

In episode 26, it takes a long time for Dessler’s wave-motion gun to hit Yamato and bounce back. If they’re using tachyons, shouldn’t it go faster?

Answer: That gun was the product of Gamilas science, which you would expect to create a very powerful weapon. The wave-motion gun is similar to the wave-motion engine, which emits faster-than-light particles called tachyons. But the Gamilas gun emits tajions, which move slower than light and have different properties.

With tajions, as their speed becomes greater, energy and momentum decrease. Paradoxically, a large tajion flow will eventually cause speed to drop. Therefore, the Gamilas wave-motion gun fires more slowly than one from Earth. Furthermore, Yamato usually flies at the speed of light. If Dessler’s gun fires it at, its relative velocity becomes slower, almost like it is traveling backward.

What? You don’t understand? Oh well…

In episode 13, the Gamilas prisoner has no trouble breathing the air on Yamato. But in the last episode, Dessler and his troops have to wear helmets. Isn’t that a contradiction?

Answer: Many people might think that, but in a military as large as that of Gamilas, there would be a foreign legion of ‘modified soldiers’ to operate in different environments. That explains why the captive pilot in episode 13 was biologically different from the troops that invaded in episode 26.

Or maybe I just changed the ship’s atmosphere to repel them. I am a genius, after all.

In episode 10 we see many female crew members in addition to Yuki, but they are never seen again after that. Why?

Answer: Because Chief Yuki was so good at her job, there wasn’t much left for the other women to do, so they went into the sleep tubes. Besides, being around over 100 full-blooded males and one VERY male robot was not safe for them. Men who voyage to other worlds often dream of starting new civilizations. I could go on, but this is not a men’s magazine.

While in space, Yamato‘s crew wears helmets. In episode 3, Captain Okita stands with Kodai and Shima in the barrel of the wave-motion gun, fully exposed to the radioactive pollution of Earth. Are they nuts??

Answer: The purpose of a helmet is to match the pressure and atmosphere of a planet, and to keep out toxins including radioactivity. Yamato functions the same way, with an atmospheric pressure barrier in certain openings. This is why Kodai could stand in the hanger with the hatch open in episode 4. The system is only breeched when the hull is damaged in an attack.

By the way, there was an air shield set up in episode 3 to allow for maintenance access. The blowing wind was caused by the difference in atmospheric pressure 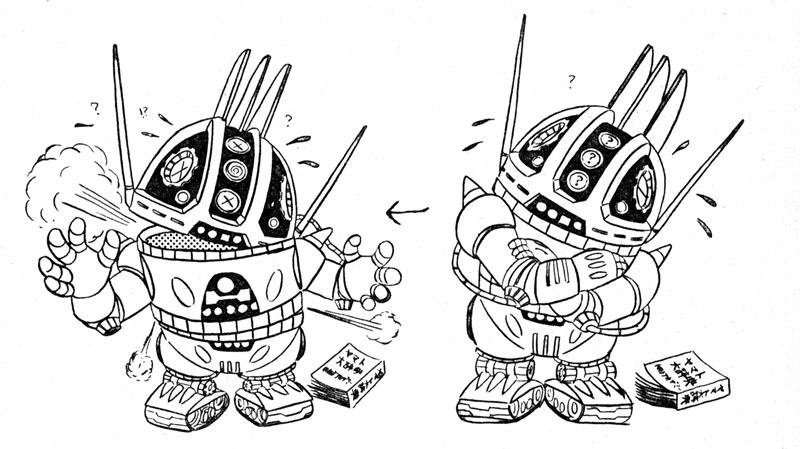 The flywheel on the wave-motion engine does not constantly turn when the engine is operating, and the size of the engine changes. Also, the size of fightercraft and cosmoguns changes from scene to scene. In addition, sometimes Aihara [Homer] is confused with Ota [Eager]. Why is this?

Answer: As for the size of the engine, it is correct in the scene in which Tokugawa [Orion] polishes it. Sometimes it looks bigger because the artists at Studio Nue like to draw extra details. The original design which I have obtained…shows that even this…BOOOOOM! 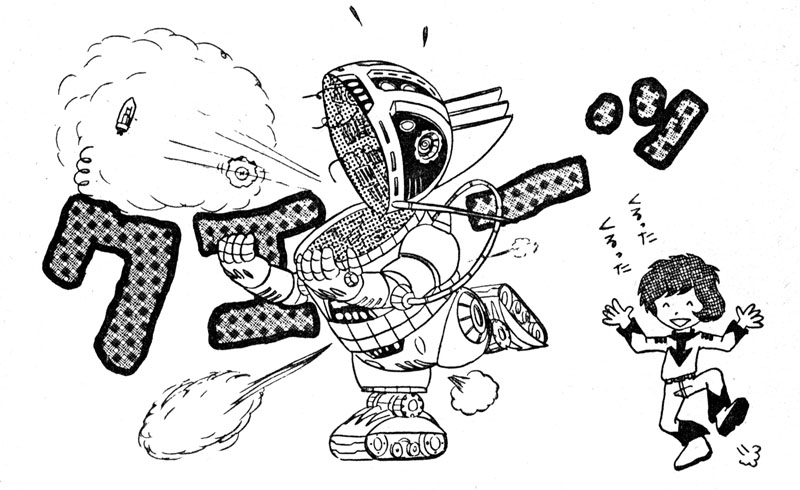 (It seems that Analyzer broke down when he got too close to the truth. Therefore, other specialists will have to answer the remaining questions.)

Q: How does Yamato fly?

A: Huh? Yamato can fly? At last, things are looking up!

-a Naval officer from the National Museum at Okinawa

Q: Is Yamato hard to beat?

A: Fight to the death!

Q: Is it true that Gamilas is targeting the Earth? I’m worried.