In the closing message at the end of TV Series 3, Yoshinobu Nishizaki tells fans they can look forward to the last voyage of Space Battleship Yamato in the summer of 1982. This was not to be, since Final Yamato took an extra year to finish, but there was in fact a new Yamato production released in 1982 that is practically unheard of today.

Produced for the 1982 Space Battleship Yamato Fan Gatherings (a series of summer meetings hosted by Nishizaki), the “Message Film” was a mini-documentary that included the original pilot film and messages from members of the production staff. After 1982, only a few snippets of this film were seen in the 1994 documentary titled The Quickening. The original has never been commercially released, but if we’re lucky it’s sitting in a vault somewhere waiting to be included in some ultimate Yamato retrospective.

Until then, we have a complete transcript of this rarest-of-all Yamato productions as it was published in issue #30 of the fan club magazine (August, 1982). Text below is translated by Earnest Migaki and edited by Tim Eldred. 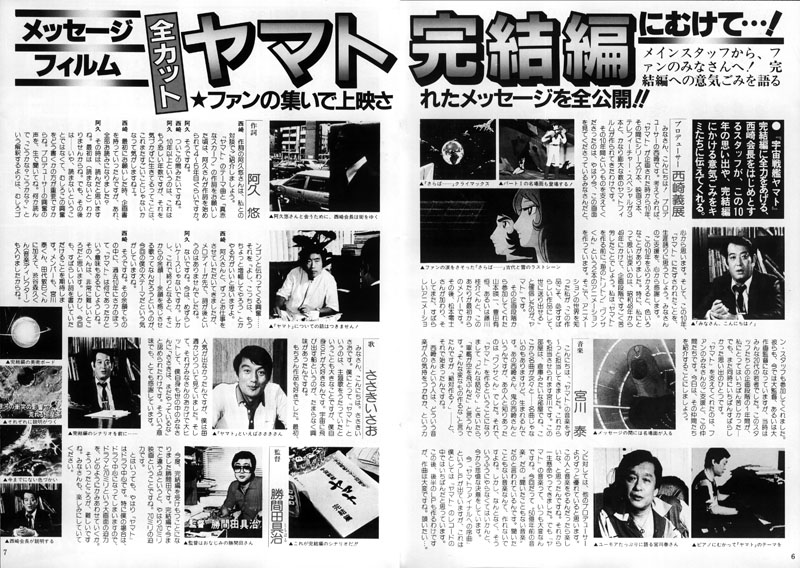 Producer Nishizaki and the Staff reflect upon the past ten years for you.

Greetings, everybody! This is Producer Nishizaki. Thinking back on it, it’s been ten years since the initial story drafts were created, and since that time, we’ve made 77 episodes, 3 movies, 3 telefeature specials and a number of films about Yamato. I believe it was all of you who helped keep Yamato alive during these ten years. I would like to thank you for your support from the bottom of my heart.

Looking back, there was a lot going on. What stands out for me were the difficult planning stages I went through in 1973 and 1974.

Before making Yamato, I worked on two animated productions called Triton of the Sea and Wansa-kun. As a result, I learned about the world of animation and gained the confidence to make this great masterpiece known as Yamato. The original members who were involved in the planning stages were Eiichi Yamamoto, Aritsune Toyota and Keisuke Fujikawa.

Leiji Matsumoto came aboard later, along with a magnificent animation staff. They’ve all gone on to become great directors or producers, but back then they were all youths in their twenties. The year-long planning period was the most difficult time of my life, but it was also the most wonderful time as well.

Let me introduce to you some of the people that made Yamato possible.

Hello. I’m the composer who made the music for Yamato, and I plan on continuing to do so. This room, which looks like a warehouse, is where many famous songs (and some not so famous ones) were made.

That Nishizaki-san, known also as Nishizaki the Devil, is the fellow I came to know during the Wansa-kun production. When he said he was going to make Yamato, I asked what it was about, and he said, “It’s about a flying warship.” I told him, “that won’t fly,” but he said, “It’ll be made!” And that’s how it got started.

Nishizaki-san is a Producer who can sense what type of music will move people’s feelings far better than others in this industry. That’s why I felt it’d be fun to work with him. However, the Yamato scores were always difficult. This time around we’re dealing with music that nobody has heard before, coming from 500 million years in the past. Don’t you think it’s impossible to create music that has never ever been heard before? And yet that’s what I’ve challenged myself to create.

Although the LP for Final Yamato is out already [Prelude to Final Yamato], my head hurts at the thought of working on the next LP that is forthcoming.

I’d like to give a warm introduction to Lyricist Yu Aku.

When you wrote the Yamato Theme and The Scarlet Scarf, you were in your 4th or 5th year as a lyricist. It seems just like yesterday.

Although more than a decade is a great span of time, to live through it and not realize this passage is also amazing.

When you first received the script, were you able to read the whole thing?

I believe I read the whole thing. I can’t create something without reading the material first. But after that, the pressure of making something that would fit became the focus. Getting feedback directly from the producer makes my job easier, rather than worrying if this would work or not.

You worked steadily throughout the project, but you never wrote the melody before the lyrics, did you?

That’s true. That would be an unusual case these days. If Final Yamato is to be the end, then the lasting theme—the song that will bring back memories—will be my biggest job this time around.

Yes, it will give the reason Yamato came into existence. That theme will be fairly difficult, I’m sure. However, we’ll all have high expectations for the wonderful lyrics you will write.

Greetings everybody! I’m Isao Sasaki. Although it is a big deal to me to sing the songs for Yamato, I’m also a fan of SF. I couldn’t wait to see this battleship that flew through the air. Although it wasn’t that popular in the beginning, I was glued to the TV, watching it each week. Then it became a big hit because of all you fans, and people acknowledged my abilities to stay in the music business. For this I owe the fans a great gratitude.

This is Katsumata, the one with the duty to work on Final Yamato. The difference on this production is that the movie is being filmed in 70mm. 70mm has such great impact. Having said that, Yamato focuses on the story. I will be working on combining the drama and the big screen intensity of 70mm. No doubt they will be a challenge for me. We’ll be seeing you all at the big screens…

Greetings! I’m Udagawa. I’m the Animation Director. My job is basically to decide how many frames per scene will be used to animate the cels and artwork.

This time around, the main characters, Kodai and Yuki, look a little younger than in Be Forever. Nishizaki-san wanted them younger in this tale, so we’re redrawing them for this. There are a lot of other new characters, too. For example, here’s the leader of the enemy…

I’m part of the staff working on this final project. My main job is Character Design. I’ve created the Dinguil boy’s image, for example. I’ve also worked on the design for the Queen of Aquarius, but since she’s supposed to be nearly divine, it was a fairly difficult undertaking.

I’m the one working on the artwork. I’m kind of like the person who works in the wardrobe department. The important job I have is to select colors. I take the characters and add the colors to them. For each image I select which color number goes where, like the face, the clothing, even the gloves. The eyes are very important as they will show the personality of the individual characters. My goal is to choose the right colors so you’ll want to see that image again.

Although Yamato began around the time I was in Junior High School, I never really had a chance to watch it. I knew it wasn’t only for kids, because it was a popular topic even among adults. However, I was able to get a copy on video and watched it all at home. It was beautiful. I figured it would be wonderful on the big screen. The love affair between Kodai and Yuki was very sweet. And I felt that Yuki had many of the virtues of the traditional Japanese women of the past.

When I sing a song, I become the character I’m singing about. I want to capture the essence of Yuki so I can sing the love song with all the passion that I believe she had. I can’t wait to hear my song playing along with the visuals of the movie.

I’m working on the storyboard and as Chief Director for Final Yamato. My main job is to draw storyboards as I did on Be Forever, but once that’s done, I become the Chief Director. Basically it’s like being the main director on the scene of a live-action movie. I focus on the background, artwork, rough cuts and final edit.

Since this is the finale, we’re making sure we do our best so there won’t be any regrets later. We hope that you all go see Final Yamato!

Greetings! I’m Tsuji. I’m handling the art design, which means taking the ideas from the script and creating the actual settings for the story. Basically it’s like building the set for a live-action production. I’m working on the Yamato and everything else, including the futuristic cities of Earth.

Another example is the giant cityscape of Uruk. We need to show the area from different angles and close-ups, and it’s turning into quite a challenge. What makes Yamato appealing is that it has drama, fantasy and mecha all rolled into one. And we’re really working hard on the mecha, because Producer Nishizaki has asked us to come up with some spectacular stuff for Final Yamato. So we have our work cut out for us. 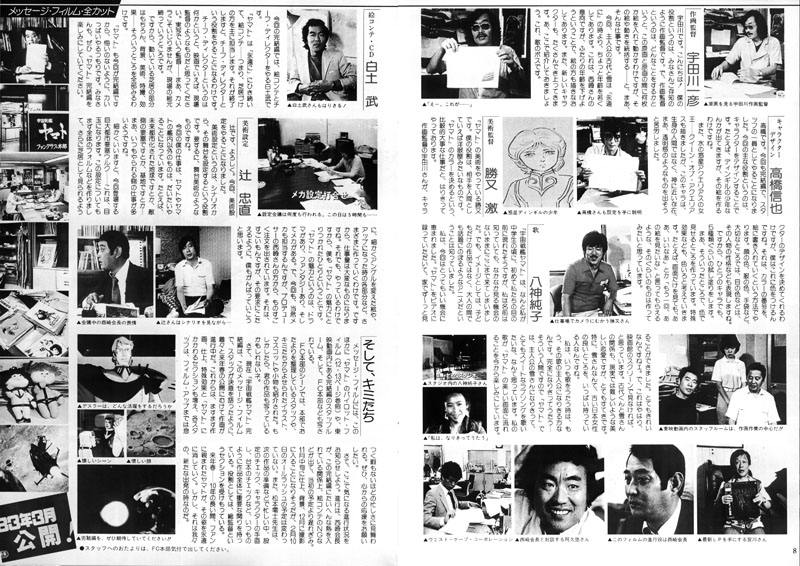 And to the Fans…

Included in the message film are the Yamato Pilot Film, the interior of the Staff Room for Toei Studio, and some shots of the fan club HQ. The fan club scenes show the staff, along with illustrations you sent. Perhaps it may even show some of the items you sent in as well.

Preparations are now underway for the premiere next spring. Due to some errors in the artwork, there has been a delay, but not to worry. The staff, including Leiji Matsumoto, are hard at work checking and rechecking to see that everything is in order. After ten years, Yamato will disappear forever, but that is only the beginning of our own journey.