The meaning of making a new Space Battleship Yamato

“I certainly thought I could write a story that should be told.” (Harutoshi Fukui)

“I think you can feel the appeal that audiences find irresistible.” (Daisuke Ono) 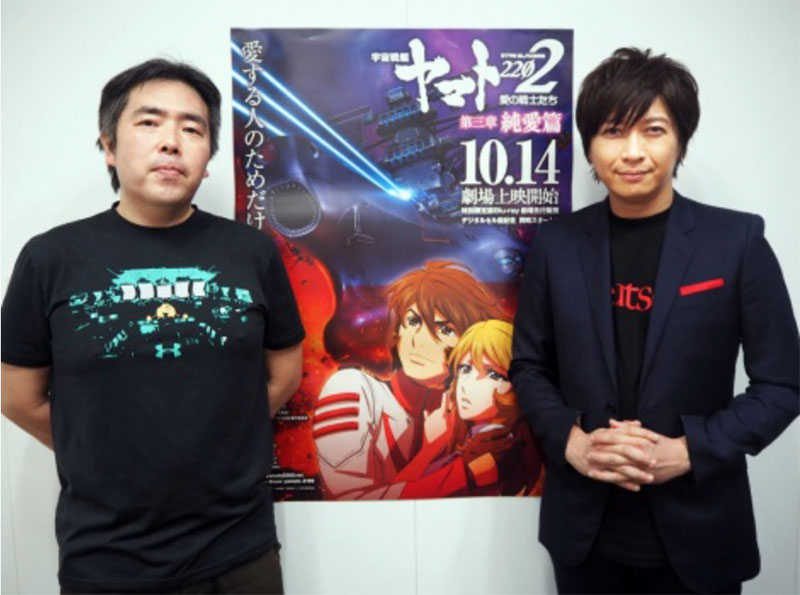 Space Battleship Yamato is the immortal masterpiece that shines brightly in the history of Japanese animation. Now a completely new series is being made, Yamato 2202 (seven chapters) which uses the 1978 film Farewell to Yamato, Soldiers of Love as its motif. On October 14, Chapter 3 opens for an exclusive three-week screening. In commemoration of this, we had this special talk with Series Writer Harutoshi Fukui (48) and Daisuke Ono (39), the voice actor for Susumu Kodai.

Interviewer: Mr. Fukui, what was your “first” Space Battleship Yamato?

Fukui: During summer vacation in the year I was a 4th grader in elementary school, I saw the compilation movie of the Space Battleship Yamato series on TV. I watched it in the evening with adults at my relatives’ house. I also remember that it was on the Fuji TV channel. (Laughs) I had heard of the title Space Battleship Yamato before then, and I didn’t seek it out but I got to watch it unexpectedly and I was completely fascinated.

I couldn’t express it clearly in words, but I think my feeling was that maybe animation could be a medium of expression equal to live-action film. Our generation is the one that saw the evolution of anime and games, and I got the vivid impression that I was witnessing a moment of evolution.

Ono: I was born in the year Farewell to Yamato was released and I didn’t experience the heat of it in real time, but of all the older works this is the only one that does not fade even when I watch it now, and something is shaken in the younger generation when they see it. There is something in Yamato that touches the Japanese heart. I think that is inherited in Yamato 2202. By the way, Mr. Fukui, when you were a fourth-grader what did you want to be in the future?

Fukui: Hmm, I can’t remember. (Laughs) I was just a child who thought only about how to avoid studying every day. I was living a moment-to-moment life, so I guess there were no specific future dreams. In fact, I was thinking about how to clear out my homework for the rest of summer vacation when I watched Space Battleship Yamato, and I guess I was surprised that it pushed me to wonder, “What is humanity?”

Ono: That is somewhat unexpected, isn’t it?

Fukui: Actually, I hated reading, and I wasn’t very good at writing book reports. Every book assigned by the school seemed boring, and it made me lose my will to read. At one time I was told to choose a book freely and I made one up that doesn’t exist. I wrote my impression of it. I thought I could turn my book-reading time into playing-outside time. 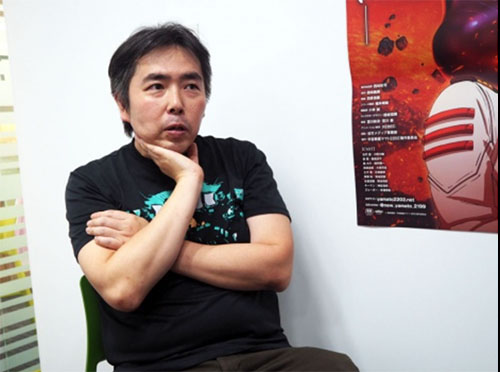 Ono: Conversely, that’s great, isn’t it? That means you created both the original story and your impression of it.

Fukui: Was it exactly the time I saw Space Battleship Yamato? This may be too much of a connection, but when I saw Yamato it might be that I first entertained the idea that it could be fun to switch and tell stories. You can talk about a lot of things in just two hours of anime, and I think that got me interested.

Interviewer: Mr. Fukui, what was your feeling when you accepted the offer to do Yamato 2202?

Fukui: I was doing Mobile Suit Gundam UC (Unicorn), so I thought that if I were also to do Yamato then “there would be no stability.” (Laughs) If I handled it poorly, it would burn my hands. If I were to take it on, the prospect of success meant creating something that could be understood at first sight. After reviewing Farewell as the motif, I saw the possibility that I would personally think it was good, so I accepted.

Ono: As for me, I’m an anime fan and part of the direct-hit Gundam generation, so I watched Gundam UC. Of course, I didn’t watch the first Gundam in real time because it premiered the year after Farewell to Yamato, but I remember it being very popular. The first video I rented with my own pocket money was Gundam 0080 War in the Pocket, and the first movie I saw was Gundam F91 (1991).

Ono: I got the foundation of it, and Gundam UC was a really interesting work. I’m not saying that just because Mr. Fukui is sitting right here with me, and when I heard that he would be writing 2202, I didn’t have to hear any more. It would certainly be an interesting work, and I was excited by the expectation that it would be a different Yamato from the previous series, 2199. Is that the prospect of success you were talking about?

Fukui: The old work was overturned many times since then. It was a big hit at the time it was released, but there were some scorching criticisms about it conjuring up the militaristic “glory of suicide” in the Japanese army. How about now? It has been said that Japan is leaning to the right, and news of suicide bomber terrorist attacks go on all over the world. In the midst of that, how difficult would it be to remake a movie that was said to “glorify suicide”? That’s where it got my creative hands burning. When comparing the background of today with that of the time the movie was released, I thought there might be a breakthrough from changing that around and poking at it.

As a result, it could be something that gets people of today to see a depiction of the hit work that a lot of people saw back then and say, “Oh, it’s this!” If it were to confront things people are thinking about now, I certainly thought I could write a story that should be told. It is Space Battleship Yamato, so therefore it can say something. It can be depicted because it’s a method of expression called animation. That’s what I think.

Interviewer: Mr. Ono, it seems that you go into your voice recordings without being informed about future developments. 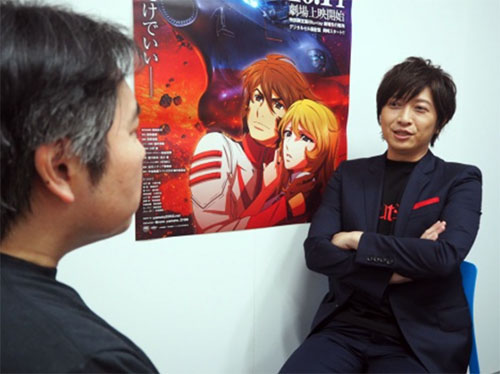 Ono: Well, every time a script arrives I’m thrilled to get it. In Yamato 2202, Kodai is forced to make various choices, and they all put his life at risk. I want to perform it with all my strength with the same feelings as Kodai, so I don’t think I need to ask too much.

Fukui: As I watch Mr. Ono perform Susumu Kodai, rather than “I want you to play it this way” I feel like, “Show me what kind of Kodai it can be.” (Laughs)

Ono: Please don’t talk like Zordar. (Laughs) But when it comes to really key scenes, I talk to Mr. Fukui and Director Nobuyoshi Habara about what kind of thought to put into Kodai’s lines, and then perform it. There is such a scene in Chapter 3.

Fukui: What does Kodai do when Yuki Mori turns up on Yamato as a stowaway?

Ono: There’s a scene I like very much where Kodai says to Yuki, “I was glad to find you on the ship.” The theme of the work wasn’t based on logic, so it was a moment I understood by emotion while doing the voice recording.

Fukui: Chapter 3 is also where we make a statement about the entire work and we’ll go into the main plot from there. What I will say to Mr. Ono’s fans is that if there’s anyone who hasn’t watched Yamato 2202 yet, it’s a big deficit in your life. (Laughs) Chapter 3 in particular relies on his power as an actor. When making animation, it’s risky to place the weight of the story on the voice acting, but I thought it was all right in spite of the objection of the staff, and I bet it all on Mr. Ono. And I won.

Ono: As an actor, I’m happy that you can say so. Chapter 3 has a tense feeling as various choices are made, and it really expands the drama. I was able to identify very much with Kodai as I performed it, and I think you can feel the appeal that audiences find irresistible.