Even in 1983, Yoshinobu Nishizaki’s West Cape Corporation was still head and shoulders above all others in terms of its publishing quality. Knowing that Final Yamato would be their last chance to grab a piece of the Yamato pie, other publishers bent over backward to flood the market with their best work. But as in previous years they simply couldn’t compete with the inner sanctum of West Cape. Here, then, are the last of the high-end Yamato publications to roll out of the home office. 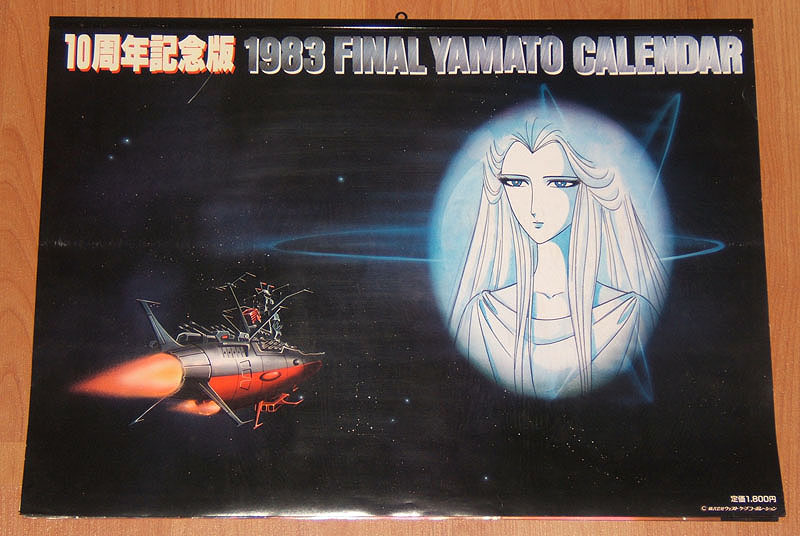 West Cape’s first Final Yamato publication was coincidentally their last calendar, released in late 1982 using the best pre-production art that was available at the time. Much of this art can be found in the Final Yamato gallery section on this website. 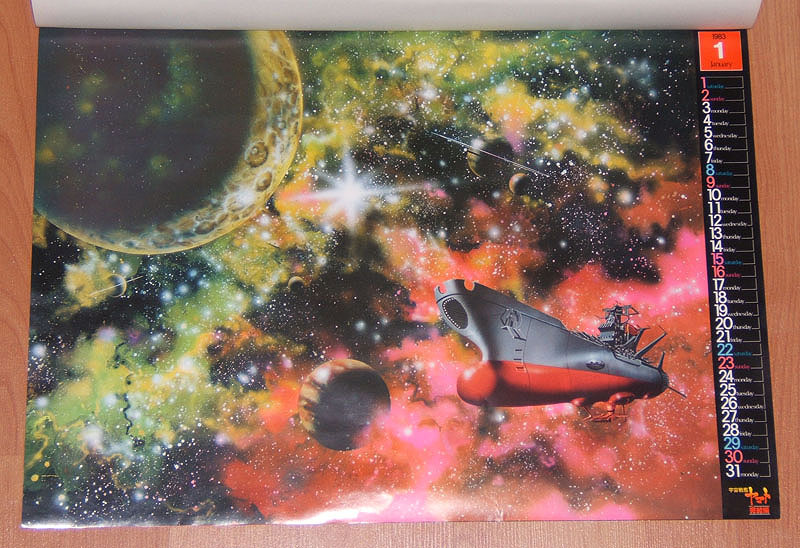 Most of the images were somewhat generic like this one, but fans certainly couldn’t complain about having another batch of exquisite original art to stare at for a year. And the images that were specific to Final Yamato gave some tantalizing glimpses of what was yet to come, starting with the unexplained destruction of Dessler’s home planet.

See the entire calendar from cover to cover here. 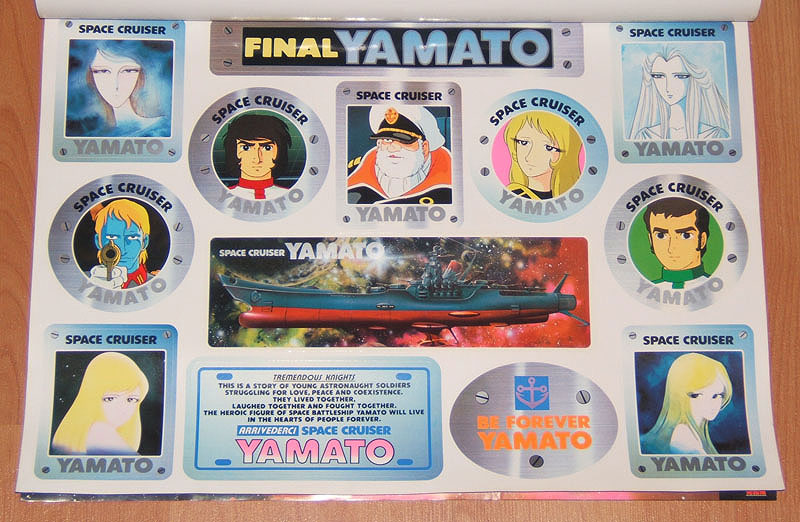 The calendar included this bonus page of stickers from across the spectrum of the entire Yamato saga. A flyer for the calendar is shown below. 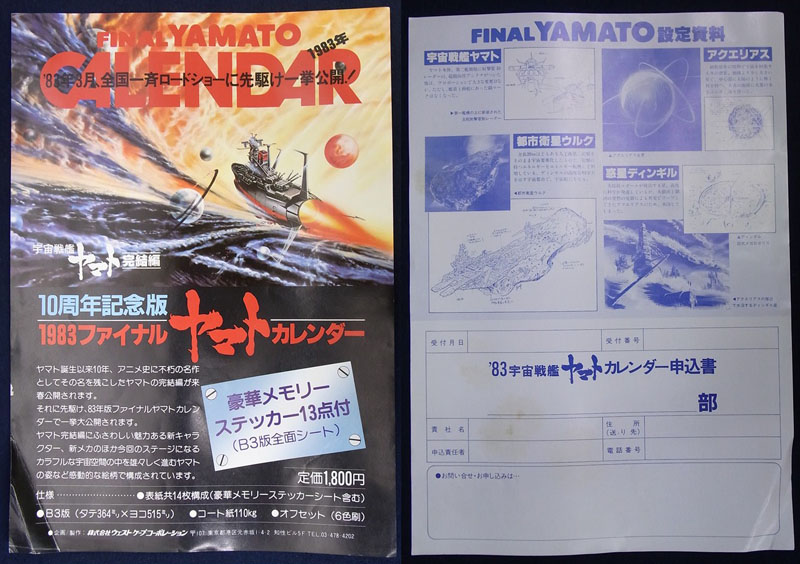 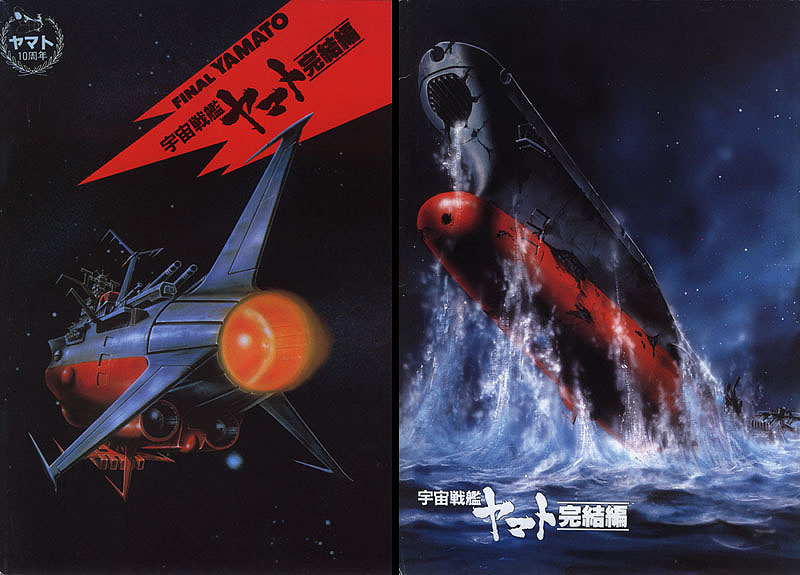 Two program books for one movie? That’s what you get with two versions of the movie released in separate months. The first edition (at left) came with the 35mm cut released in March, and the second (at right) accompanied the 70mm re-release. Other than the front and back covers, only three pages were altered in the second edition.

Translated text from both program books can be found here. To examine them from cover to cover (art only), click here. 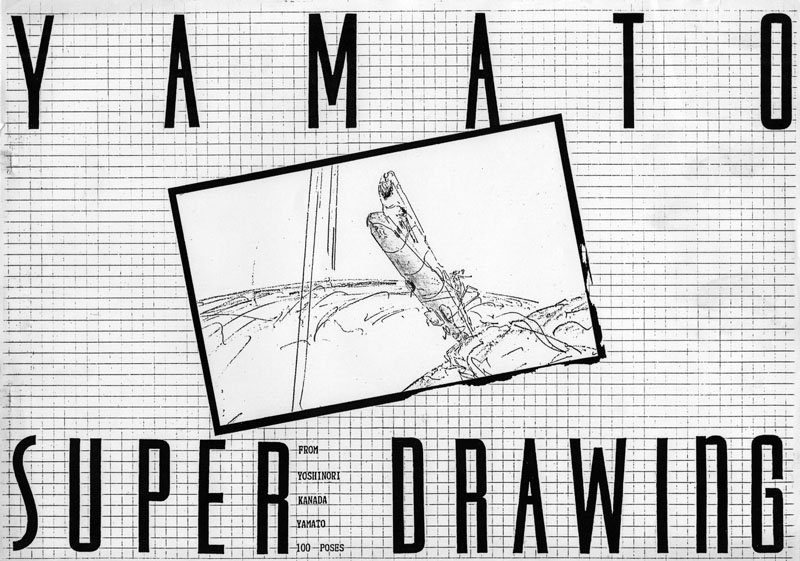 Production designer Yoshinori Kanada, a superstar anime director of the early 1980s, joined the Yamato staff on Be Forever and brought a new, dynamic storytelling sensibility to the table. He was a key figure in the development of Final Yamato‘s visual style and cranked out an enormous number of sketches that suggested what the last film should look like. These were collected into this package, which was offered exclusively to members of the Yamato fan club by mail order.

Kanada also illustrated a Final Yamato novelization for publisher Tokuma Shoten, which can be seen here. Read our tribute to Kanada here. 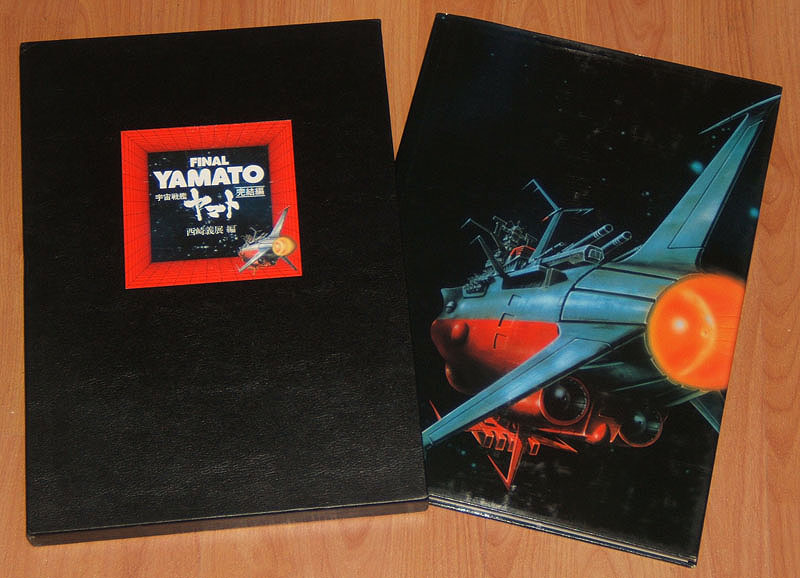 Everything about Final Yamato was BIG. The story, the scale, the events, the marketing, everything. Nothing bespoke this better than the gigantic hardcover book of the film, which loomed large over every previous hardcover that had emerged from Nishizaki’s studio. It opened to a massive 21-inch width, making a full page spread about the same size as the 1983 Final Yamato calendar. 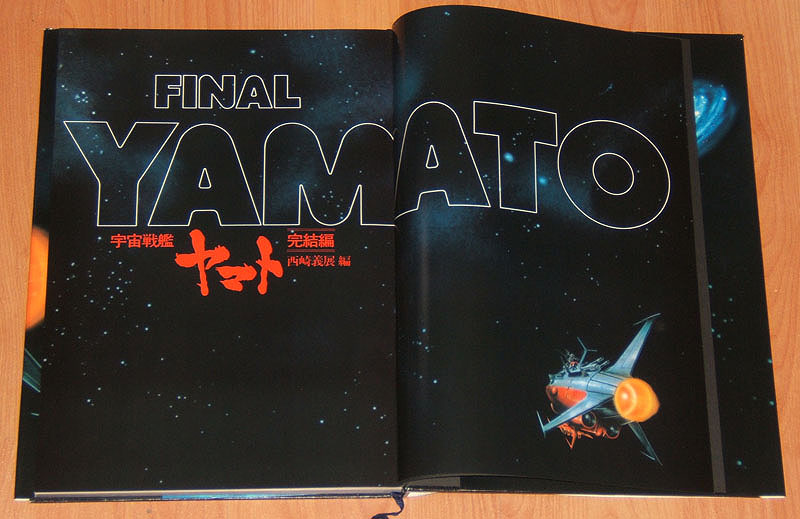 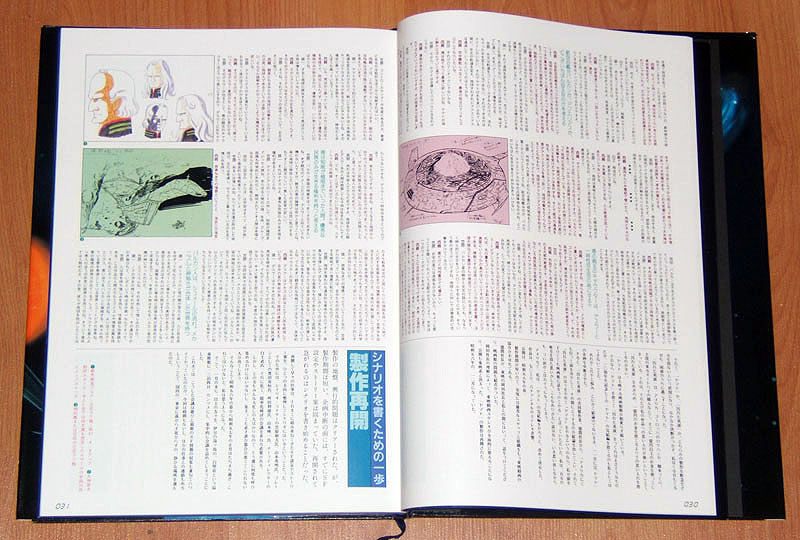 Kicking off with a quick history of the previous 10 years, the first 44 pages told the story of the film’s development in extraordinary detail with early designs, scenarios, and complete transcripts of plotting sessions between Nishizaki and the writing team. And apparently everyone in the art department wanted to take a crack at the concluding love scene, based on the number of different storyboards in this section. 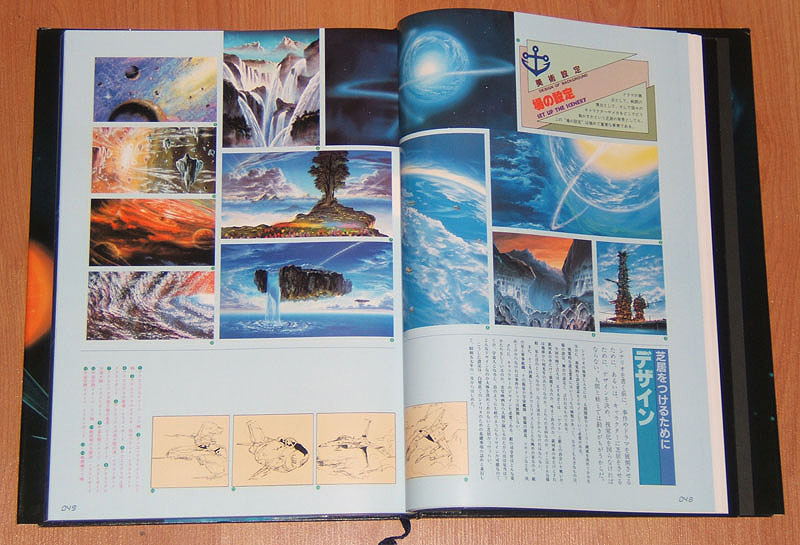 Pages 45 – 71 are devoted to production design, starting with the epic scenery… 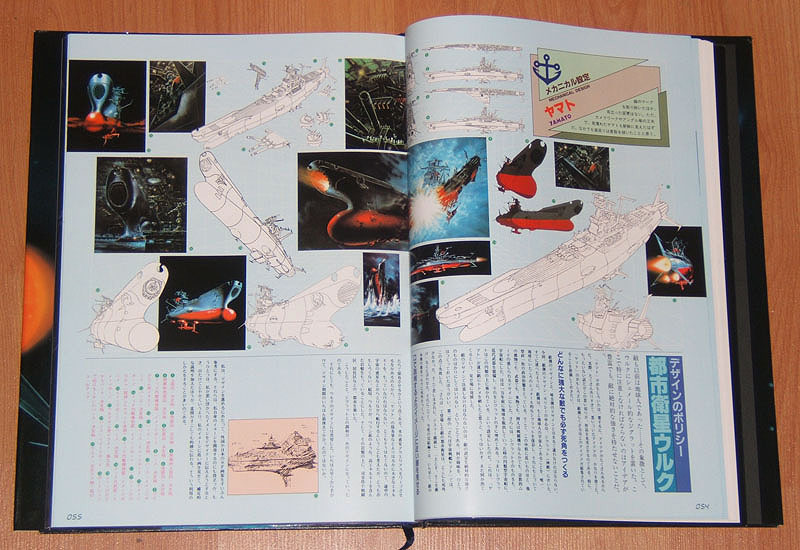 …continuing with the all-important mecha design… 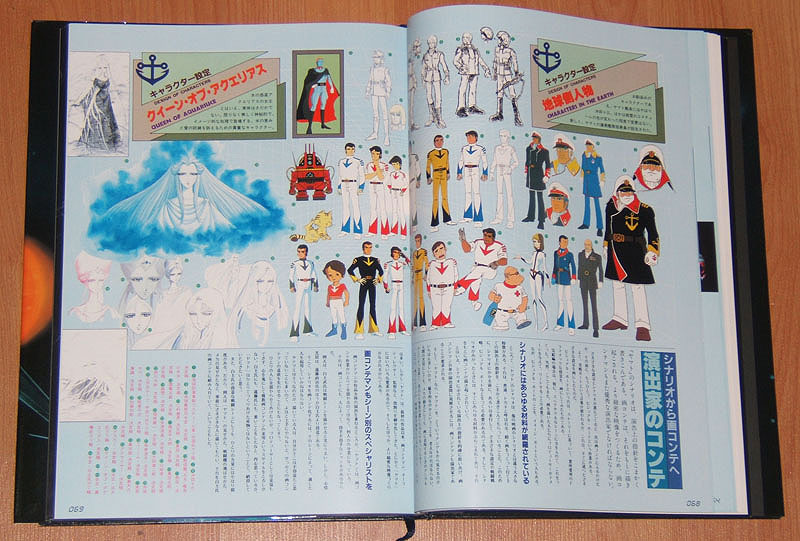 …and wrapping up with character design, which was supervised this time by artist Shinya Takahashi. 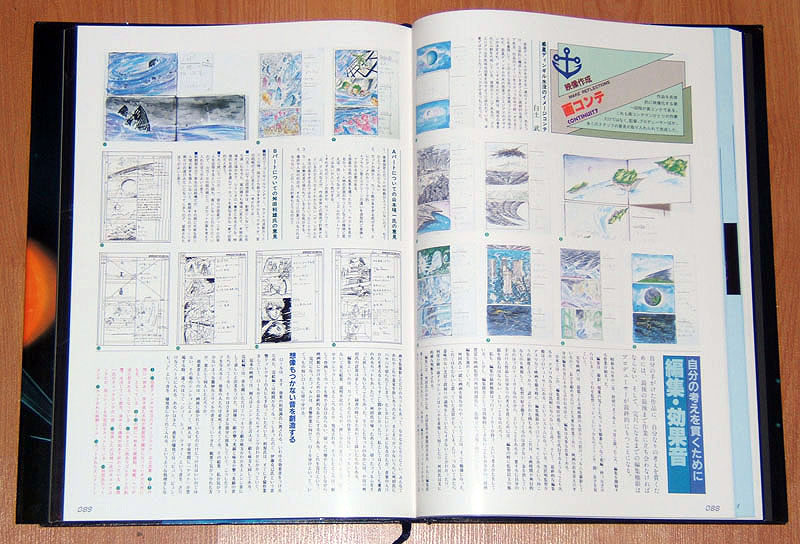 Pages 72 – 100 covered the physical production of the movie from the final script drafts through the nuts and bolts of creating the animation itself in unprecedented detail. It was essentially a textbook for how to make an epic Yamato movie, and would have been a great help in the making of another one. 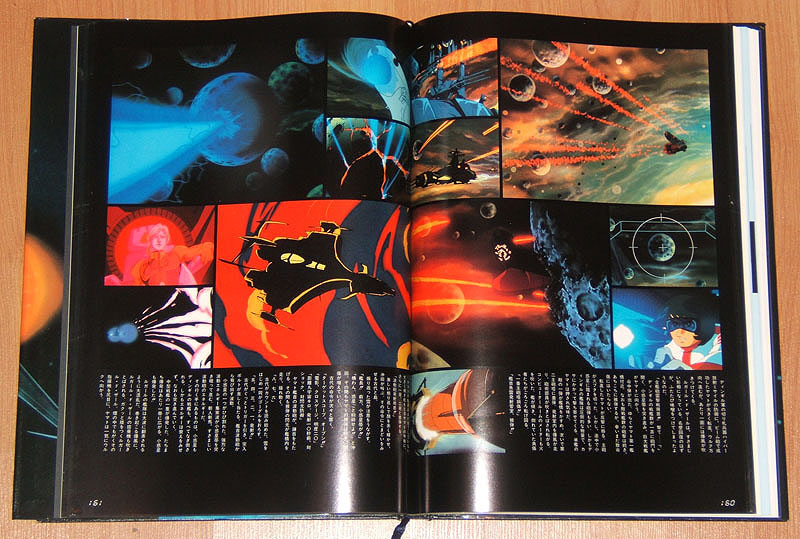 The remainder of the book (pp. 101 – 248) contained a deluxe photo-story with animation stills large and small, occasionally punctuated by double-spread production artwork as seen below. 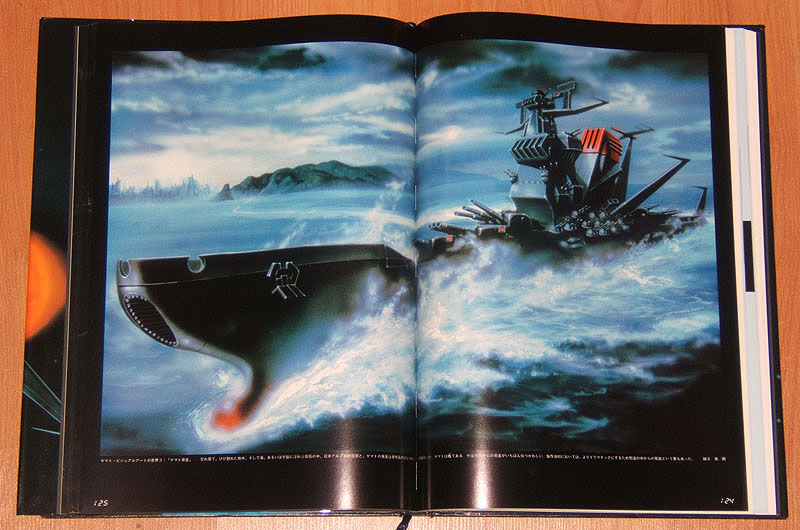 Finally, since the book coincided with the 70mm re-release, the last 8 pages of the photo-story section depicted scenes that were revised or newly-created for it. 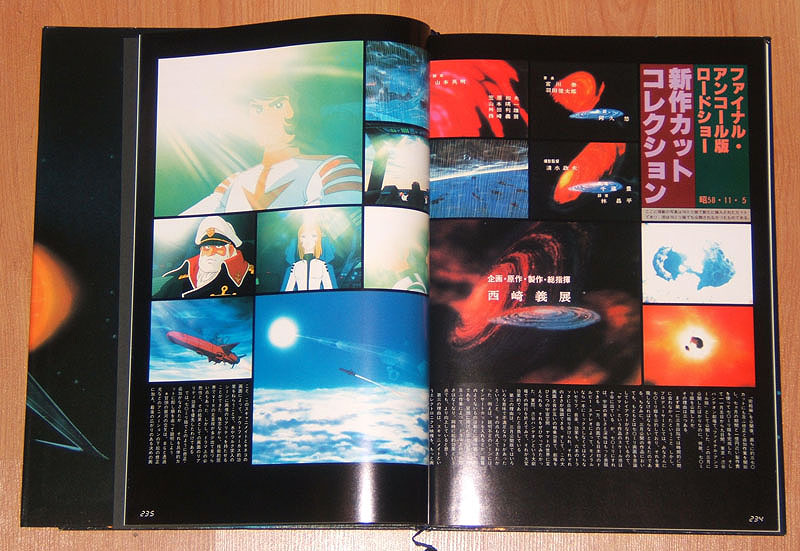 Once again, only a poster-size promo flyer would be adequate to communicate the heft of the book (described here as ‘Jumbo size’) and promoted the fact that it would come packaged with an original animation cel. Such a book must have been as grueling to make as Final Yamato itself, but the Nishizaki mantra of “we will have no regrets afterward” undoubtedly served the same purpose for both. It was, after all, the core belief of the Yamato saga for its entire history.