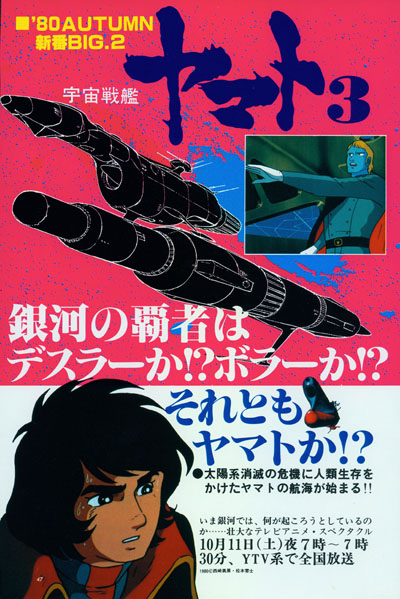 Is the champion of the galaxy Dessler!? Is it Bolar!? Or is it Yamato!?

The voyage of Yamato begins for the survival of humanity in a crisis of the solar system’s extinction!!

Yamato goes into the “Milky Way”

Talking about the ambitious framework of Part 3…

Interviewer: It seems that Be Forever Yamato did well.

Nishizaki: The box office was about 18 million yen. Unfortunately, it didn’t exceed Farewell to Yamato. But Be Forever Yamato is a hopeful work with a major tone and a theme of trust. The previous work had a minor tone, to “risk one’s life for others.” Everyone would die under that theme. The deep impression is that it honors death.

Interviewer: Couldn’t you make a big hit work in the future that says “don’t let it die”?

Nishizaki: Maybe so, but unless I feel that “I want to show this,” I cannot make it. But I think I want to make “the end of Yamato.”

Interviewer: Oh, that’s big news. When is it?

Interviewer: Well, I’m excited just by the thought. So, for the part 3 TV series, Earth’s galaxy is the stage…

Nishizaki: Yes, until now the drama has come from outside the galaxy. We sort of forgot about our own familiar galaxy. But the scale is huge. It’s 100,000 light years across, and we’re about 30,000 light years from the center. That’s the location of Emperor Dessler’s Galman Empire.

(Mr. Nishizaki leans forward and sketches a galactic map on a piece of paper; the passion he feels for this story comes surging out.)

The Bolar Federation is about twice its size and lies to the north. There has been a power struggle. Naturally, there are battles all over the place. An antiproton missile is shot from the Galman side and becomes a “stray shot” that pierces the sun, which will rapidly become a supernova. Based on that, can you see why Yamato launches?

Interviewer: No, I’m not well-versed in SF…

Nishizaki: The fans will understand. (Laughs) Briefly, the sun swells up and there will be a huge supernova explosion.

Interviewer: Now I understand. (Laughs) So that’s the reason the Earth is in danger…

Nishizaki: This is more than just danger. (Laughs) It is another three years until the sun explodes. The limit for humans to live on Earth is just one year. There are only 365 days. Therefore, we need a second Earth so Yamato goes into the Milky Way.

Interviewer: I’m ashamed to ask, but why go into the Milky Way?

Nishizaki: When you see the Milky Way from Earth, that’s the direction toward the stars.

Interviewer: So the possibility of finding a second Earth there is higher.

Nishizaki: Yes, and that’s the direction the Galman Empire forces come from. 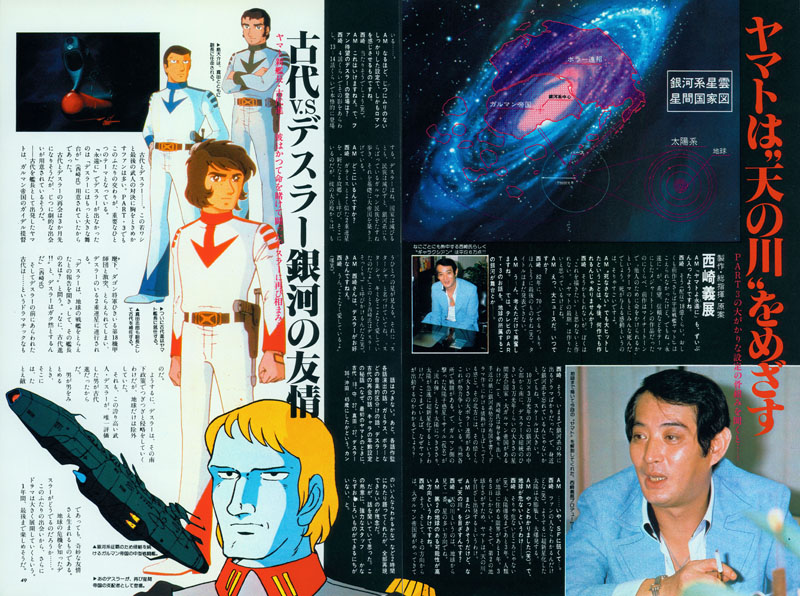 Interviewer: Well, this setting seems firm and reasonable, and also has a romantic feeling.

Interviewer: That’s good. Will Dessler make a long-awaited appearance for the fans? 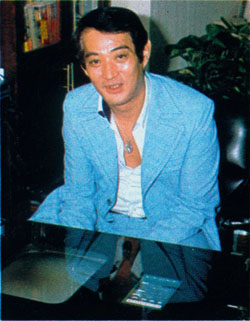 Mr. Nishizaki seems to be addicted to
Galaxian, and has an average of
60,000 points!

Nishizaki: You’ll get a hint of him in Episode 4, then he’ll appear in earnest around Episodes 13-14. If Dessler’s nation falls, his race will fall with it, so he goes on a quest to find the Galman race which is scattered across the galaxy, and he builds his empire on that basis.

Interviewer: Where is it [located]?

Nishizaki: The place referred to as “the new home” is a binary planet very similar to Gamilas, but from his large palace he can see another planet. He has named it Starsha. “Starsha, I loved you deeply,” he calls out to it. (At this moment, Mr. Nishizaki looks just like Dessler.)

Interviewer: Dessler is your favorite.

He talked some more about the story. He talked about Gamilas, the musical theory of Bolar, the reunion of Dessler and Kodai, and the secret story about the characters’ ages. (At the time of the first Yamato, Kodai was 18, Mamoru and Sanada were 27, Dessler was 36, and Okita was 45. Some know the secret behind these numbers.) [Translator’s note: just add the pairs.]

The conversation was over two hours, and I’m sorry that it can’t be reprinted in full. But having heard the story, I had a thought. With a staff this enthusiastic, surely something interesting will be made.

Yamato‘s new captain Susumu Kodai–a reunion with Dessler, against whom he once fought for his life

Kodai and Dessler…fans’ hearts race at the confrontation of the young soldier and the last warrior. Their association will become an important theme in Part 3.

Dessler did not appear in Be Forever Yamato because “Dessler has a bigger stage” being prepared for him, said Mr. Nishizaki. The reunion of Kodai and Dessler seems to be about three months away, and I hear that we should prepare for a really dramatic encounter.

Yamato, with Kodai as the captain, will clash with the 18th Armored Division lead by General Dagon, a subordinate of Gaidel of the Galman Empire. This leads to a capture, and Yamato is taken to Dessler’s binary planet.

“Dessler hears that a battleship of Earth has been captured,” Mr. Nishizaki said. “He asks, ‘what is the name of the captain?’ ‘What, Kodai!!’ And Dessler is taken aback.”

And when Kodai appears before Dessler…it is dramatic. Dessler’s policy is to continue the invasion into the southern part of the galaxy, but to exclude the Earth. It is because Dessler the proud warrior considers Kodai as his equal. Even when a man recognizes another man as his enemy, a strange friendship is born.

How will Dessler, who caused Earth’s crisis, appear again? From the encounter of these two people, a great drama will unfold. We’ll be able to enjoy it for the next year. 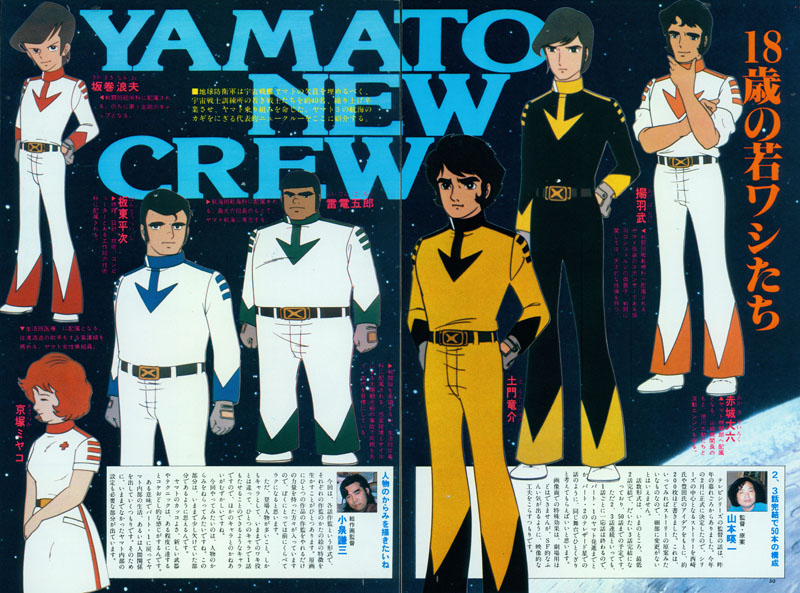 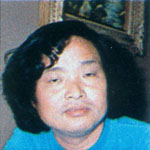 It is composed of 50 episodes in 2-3 episode parts

The conversation about directing a new TV series began late last year. It was formally decided in February of this year [1980], based on an idea by Mr. Nishizaki and Aritsune Toyota that ran to 200 pages. Since this is like a draft proposal, I can’t say there won’t be any changes. At the moment, the format consists of stories that will be completed over 2 or 3 episodes, and 50 episodes are planned. Since each story finishes in 2-3 episodes, it’s good to think of it as similar to the beginning of Series 1 or the Planet Telezart story from Series 2. Although it’s not possible for the special effects in the animation to look like they were made for the cinema, I intend to put a lot of creativity into the SF ideas so that a good image comes out. 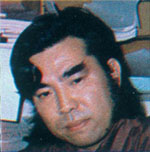 I want to depict interconnected people

This time, each episode in the series will take full advantage of the production’s characteristics. Because we only have people who are at the top of their game in animation, I think the work will be a breeze compared to before. However, there are many characters. And it’s different, because unlike before, we can only focus on one supporting character at a time in each episode and it’s difficult to balance them with other characters. What I want to try this time is to make them interconnected. It seems that this part has sort of been missing so far. To some extent, the coolness of Yamato, the new weapons and techniques, feels like a bluff. In a way, life inside Yamato returns to the way it was in Part 1. We’re going to explore human relationships. Therefore, we’ll need to set up the interior parts of Yamato that haven’t existed before now. 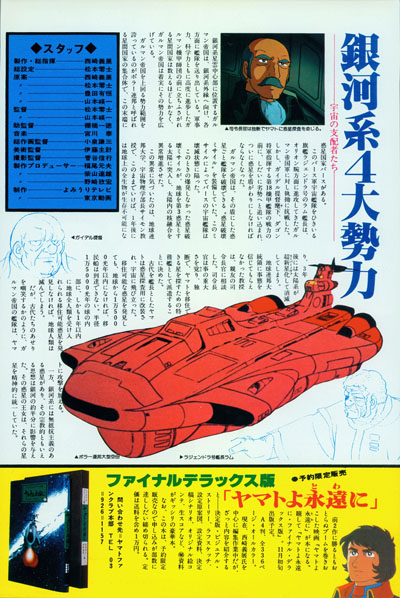 The Galman Empire is located at the heart of the Milky Way, and sends off fleets in every direction to the outer edge of the galaxy. Few nations can stand before the military strength and advanced science of the Galman armored divisions, so the Galman Empire steadily expands its power.

A coalition of interstellar nations called the Bolar Federation boasts a greater sphere of influence than the Galmans, and includes a planet near to us called Berth.

Captain Ram of the flagship Legendra leads the fleet of Berth, and fights relentlessly against the invading Galman forces that attack the Orion spiral arm area. However, the 18th Armored Division under General Dagon, a subordinate of Admiral Gaidel, is gradually outnumbering Ram’s fleet. Finally, they must use a planet as a shield.

The Galman Empire is equipped with “planet destruction missiles,” which are capable of destroying any planet being used as a shield. The spacefleet of Berth is destroyed by this missile. But one missile that does not explode plunges into Earth’s sun and touches off an abnormal fusion reaction.

This abnormality is observed by the Earth Federation University, and if the calculations of space physics professor Simon are correct, it will be impossible for living organisms to survive on Earth in one year. The solar system will be destroyed when the sun goes supernova in three years.

The Earth president does not believe him, so he talks with his close friend, the EDF commander. When he realizes the importance of this finding, he makes a unilateral decision to dispatch Yamato on special duty to look for another planet for emigration. Kodai becomes the captain of Yamato, which is refitted for planetary exploration, and launches into space.

On the other hand, there is another planet in the galaxy that lives with the principle of nonresistance. It is thought that it might have a religious influence on about half the galaxy. The princess of this planet has unified them psychologically…