April 2018 was one of the slowest months on record for 2202 activity since the series began, but it was one of those calm-before-the-storm months with important moments in the runup to Chapter 5. Here’s everything that went down… 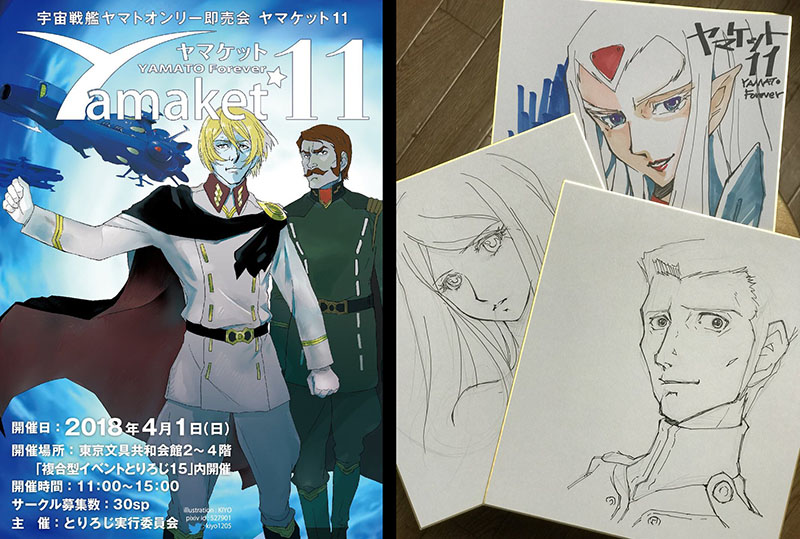 By now, you should know the drill: Yamaket is a one-day mini-con held twice a year as part of a larger one-day event in Tokyo called Toriroji. A shortened version of “Yamato Market,” it brings together fans who create their own Yamato merch and sell it to fellow fans. Doujinshi (fanzines) are the most common items, but various other trinkets appear as well. The organizer is a fan who goes by the online handle Kiyo and is responsible for the art shown above.

See some of what turned up at Yamaket 11 in a photo gallery here.

Back in the original Yamato production years, before home video and LONG before social media, radio played a huge part in the life of fans. Anyone could see movies and TV episodes, but the hardcore fans found their community on radio through specials, talk shows and 4-hour dramas on All Night Nippon.

On this day the good people at Clover Media, a radio station based in Saitama, announced their intention to return Yamato to the radio on May 5th in an all-new 4-hour extravaganza that would focus on the music of saga from the beginning up to today with guests Michio Murakawa and Hideaki Anno.

The show went on as planned and was rerun over four days in the second week of May. We’ll cover it here next month. 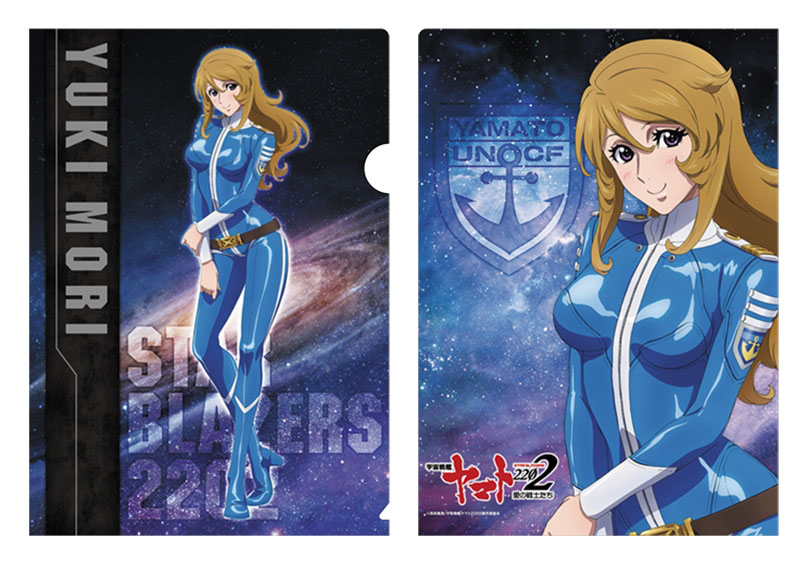 Advance ticket sales have been a vital part of Yamato 2202 marketing, and with Chapter 5 there are more channels than ever to buy your ticket early, each with bonus items as incentives. Starting April 15, these two all-new clear files became part of the package.

By purchasing their advance tickets at Lawson convenience stores, fans could pre-order the clear file of their choice (or both with two tickets), to be delivered on June 21. No explanation was given for Yuki’s new uniform color or the odd look on her face. 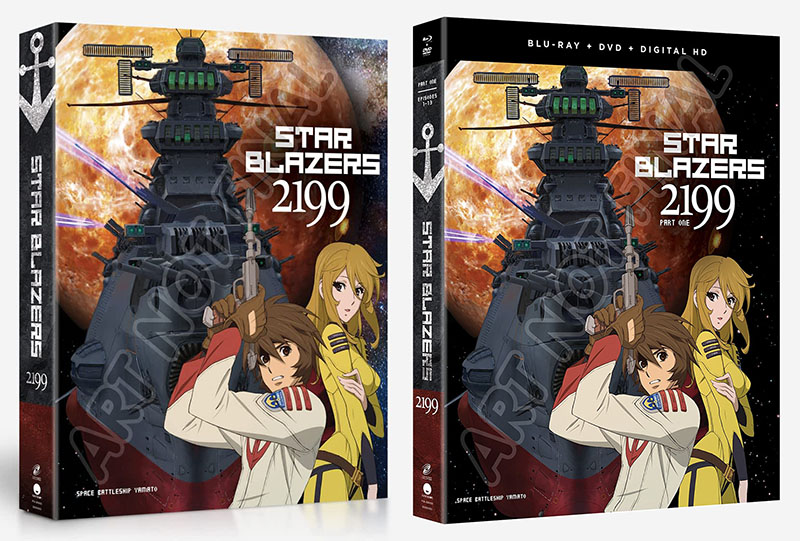 Yamato 2199 concluded its initial run on Funimation with the final episode premiering on May 2, with Yamato 2202 set to debut the following week. And now that this point has been reached, home video will follow. Starting now, you can preorder the first half of the series in a BD/DVD combo pack for release on July 31.

Order it from Funimation here or from Amazon here.

A limited edition (above left) includes a collector’s box for both parts, a 40-page art book, and a bonus feature with Funimation actors and staff. Order it from Funimation here.

A release date for the second half has not yet been announced. 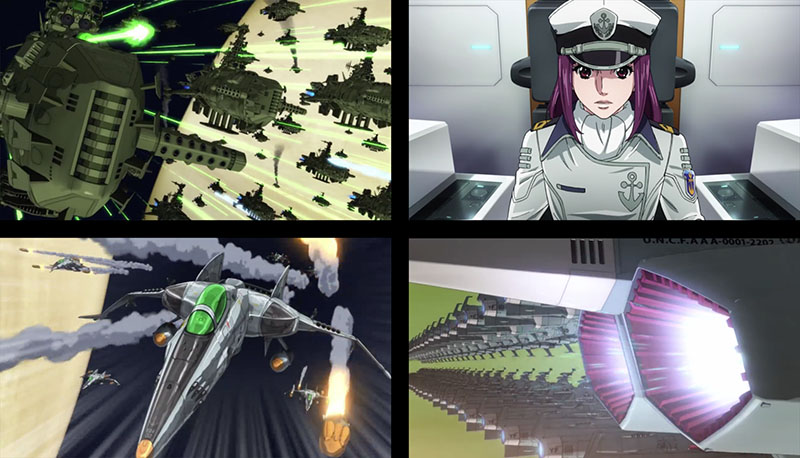 Buckle in. On this day, two new trailers were released for Chapter 5, seemingly with the mission of cramming as many scenes as possible into a single minute. It gave us our first taste of the big event we’ve been waiting for, the epic Battle of Saturn. There was a 60-second version and a 30-second version of the new trailer. The latter includes one or two different shots. You’ll need multiple viewings to catch them all.

The same day as the trailer, we got an explanation for some of what was in it. More specifically, for WHO was in it; three new characters are being played by (L to R) Isao Sasaki, Ayahi Takagaki and Tomoyo Kurosawa. Their official character descriptions were added to the official 2202 website and are translated below along with actors’ comments. 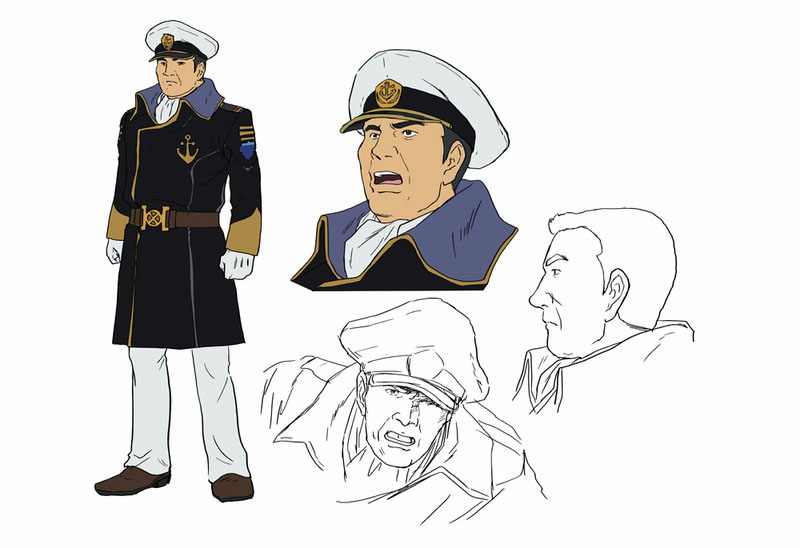 52-year old captain of Apollo Norm, the third Andromeda-class ship. He was a classmate of Andromeda Captain Yamanami at the space defense university, and a close friend who shared life and death with him in the solar system’s second inner-planet war.

At the advance screening of Yamato 2202 Chapter 4 at the Shinjuku Piccadilly, Director Nobuyoshi Habara asked me, “What kind of role would you like to play as a voice actor?” I answered, “Wouldn’t I be a captain at my age?” That was the trigger for me to play Captain Yasuda of Apollo Norm. Isn’t it rather dignified for him to be a colleague of Captain Yamanami? I think so. 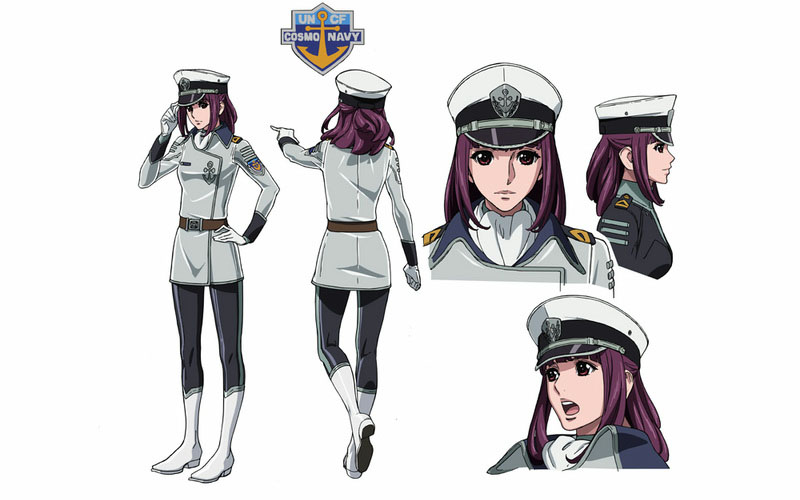 27 years old. Young captain of the “mystery ship.” In the depths of her cold eyes resides a strong will filled with readiness. What future does she and her crew look toward?

I’m glad to appear in this work, which has come around again. I got a detailed description of the role at my first on-site appearance, and when I heard, “This isn’t a role for the faint of heart,” I trembled with excitement. I was very grateful to have all my questions answered there. It’s an honor to join a work that has been loved for so long. Please look forward to Saki’s actions! 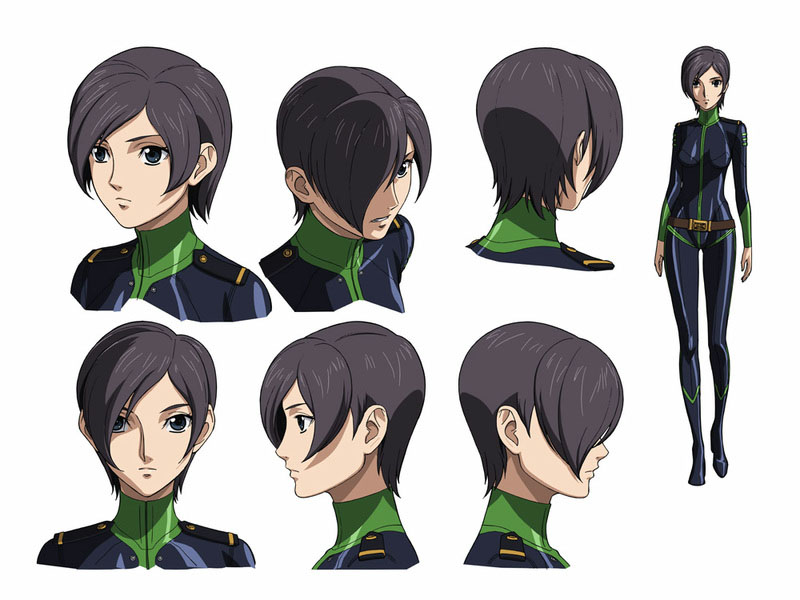 20 years old. Chief navigator of the “mystery ship.” She has no actual combat experience, but her boldness and unique insight prevents her from being awestruck.

I’m very happy to participate in this beloved work from before I was born. I’ll work hard to not be left behind by my seniors. Thank you very much!!!

The fourth collaboration campaign with this fast food franchise (specializing in steak) would run through the end of May, giving fans a chance to enter a prize drawing for 50 advance tickets, 10 Blu-ray discs, or 10 Chapter 5 posters.

The newest 2202 model arrived on this day in two forms: a single green version and a double green/white version in a slightly deeper box. The white version, as seen in Chapter 3, is the command ship belonging to Mazer. However, the model kit is solid white and does not incorporate the blue/grey tones. 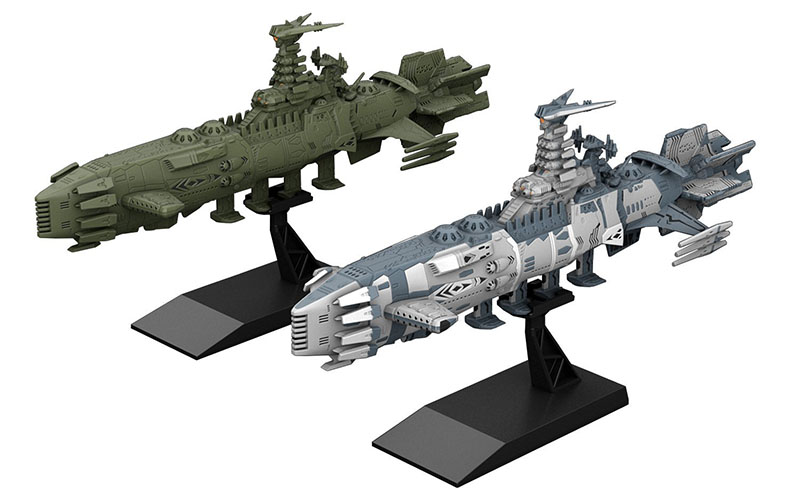 As documented in early interviews, the genesis of this particular model has a unique story behind it. Writer Harutoshi Fukui spoke for many fans of his generation when he complained about how difficult it was to build the original 1978 version with its numerous fins and modules. By giving this lesser-known vessel a prominent role in Chapter 1, his hope was to motivate Bandai into designing a simpler kit using modern technology…and now we have it. 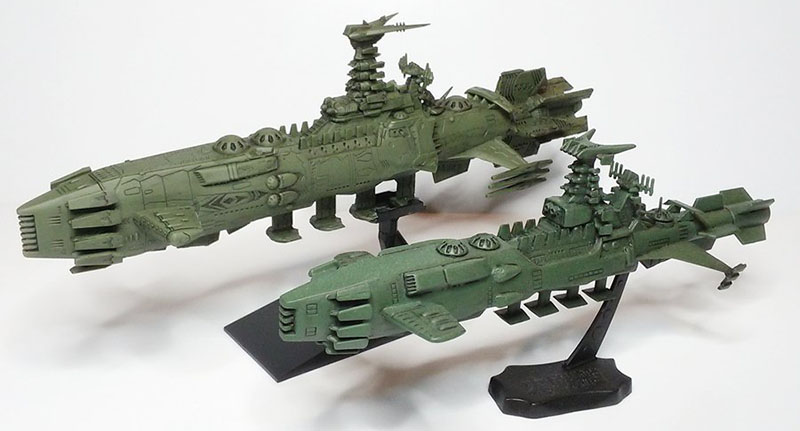 Here is the new kit (left) next to its 1978 predecessor, handily demonstrating how far that technology has come. (Posted on Twitter by Hobby Armada). 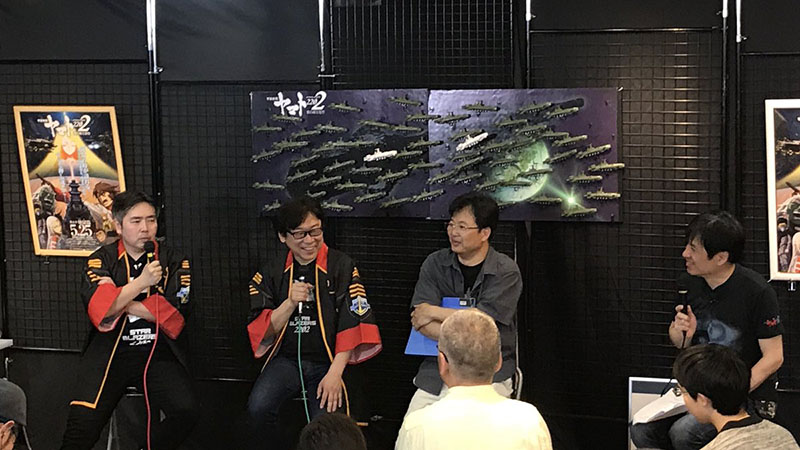 The Kalaklum’s arrival was marked by a true first in Yamato history: a model-building event held at the popular Yamashiroya toy store in the Ueno district of Tokyo. For the price of two models, fans could build their Kalaklums on the spot and then combine them into a “Legionnaire Cannon” mural provided by the store.

Writer Harutoshi Fukui, Director Nobuyoshi Habara, and Bandai model developer Hirofumi Kishiyama were on hand to contribute their own models and sit down for a conversation hosted by Osamu Kobayashi. (All pictured above.) Incidentally, it was decided in this discussion that April 21 was Klaus Keyman’s birthday. 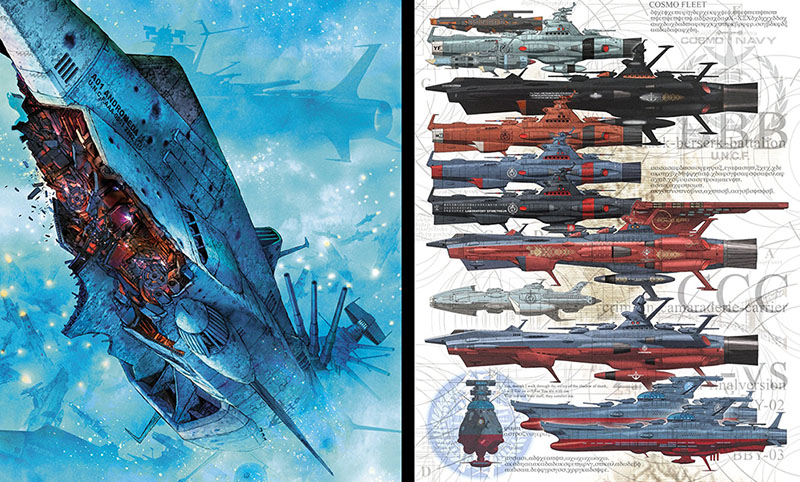 Assistant Director/Mecha Designer Makoto Kobayashi shared his artwork for the new Chapter 5 slipcase on this day; a beat-to-hell Andromeda on the front and a fleet lineup on the back that includes some of his designs from Yamato Resurrection. (No clue yet if these will appear in 2202, so it’s all speculative at this point).

See larger versions of both pieces at the end of this report. 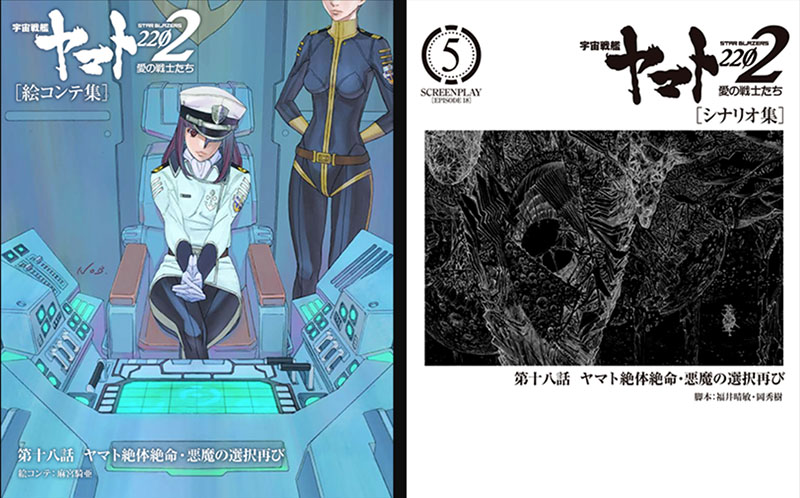 Four days later, Bandai shared these images, the covers to the storyboard and script books that will be included in the theater-only Chapter 5 Blu-rays. Both are derived from Episode 18, which concludes Chapter 5. Character designer Nobuteru Yuuki rendered new characters we just met in the trailer. The cover image of the script book may provide our first close look at the inner structure of Gatlantis.

On this day, Akiba Souken announced early results of a user survey to vote for the most popular anime remake/reboot projects. One week after the contest began, Yamato 2202 and Yamato 2199 captured the top two spots respectively with just over 2400 votes tallied.

The survey concluded on May 1, locking them into place with over 4100 votes counted. Thirty titles were chosen with Arslan, Fullmetal Alchemist, and Evangelion all placing in the top ten.

Bandai announced the latest addition to the 2202 model kit lineup, to be released in August: a double set of Mecha Collection kits with the Garmillas Czvarke and the Gatlantis Deathvatator in a single box.

Though this is double-set is a first in the MC lineup, both of these kits have been previously released. The Czvarke was part of the 1/1000 Garmillas Warship set 3 (October 2013), and the Deathvatator was included with the 1/1000 Kiska (December 2014).

Between now and August, Bandai has promised a Mecha Collection Apollo Norm and a reissue of the MC Cosmo Falcon in Apollo Norm colors. 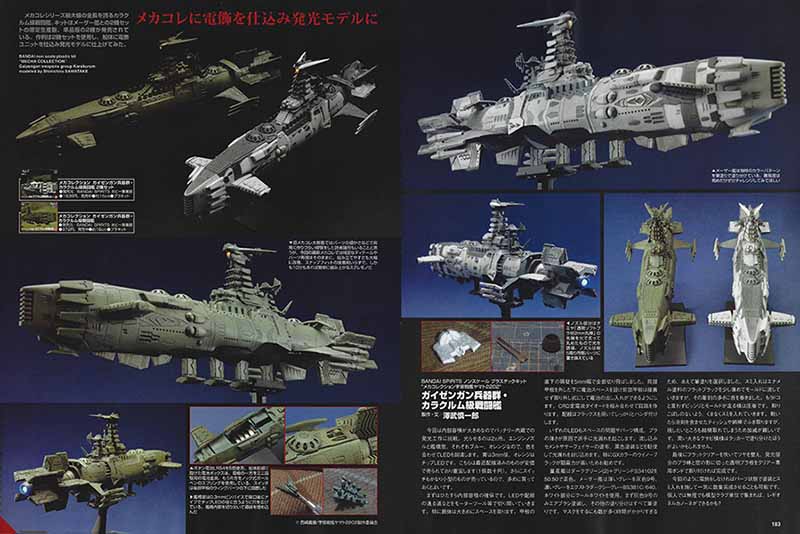 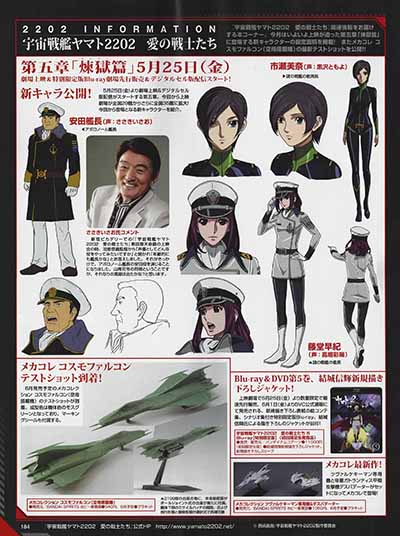 Hobby Japan jumped onto the Kalaklum bandwagon with two pages devoted to the new model and one covering the new characters for Chapter 5. 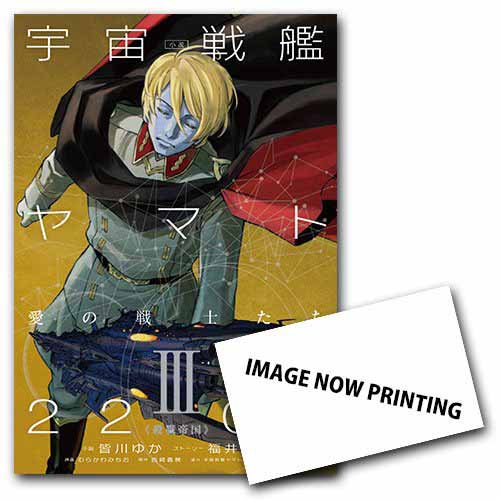 Set for publication on May 25 (Chapter 5’s premiere date), the third volume in the 2202 novelization by Yuka Minakawa will include more interior illustrations by Michio Murakawa and the handsome cover art shown here. (The “now printing” block is a placeholder for a custom trading card to be bundled with the novel by Yamato Crew.) Based on previous patterns, this volume should get us up to Episode 15, the first segment of Chapter 5. 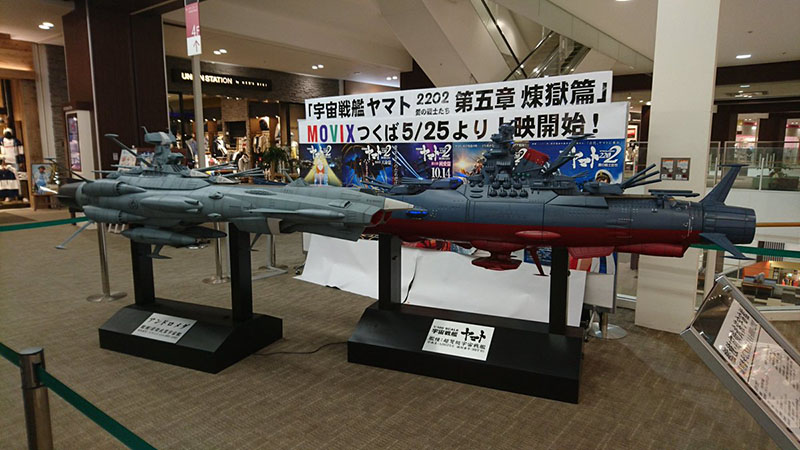 The month ended with a reappearance of the two 3-meter display models of Yamato and Andromeda. This time they took up residence in a Tsukuba city mall outside a MOVIX theater that would premiere Chapter 5 just four weeks later.

This photo was posted on Twitter by Nereus01. More will be featured in our next report. 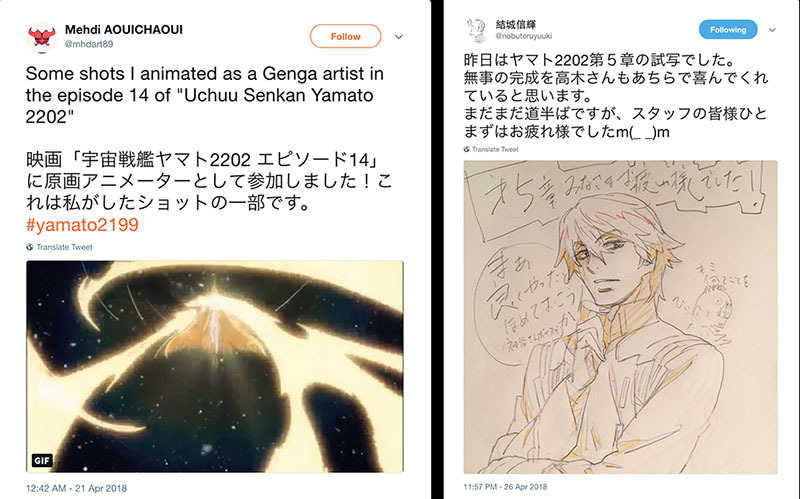 If you know where to look on Twitter, you can find an occasional glimpse at work by the pros. At left we see an April 21 post from an animator with the online handle mhdart89. See his post with GIF here.

At right is an impromptu sketch of Klaus Keyman by character designer Nobuteru Yuuki. Find his Twitter page here.

If you haven’t yet made a habit of regularly checking on Kobayashi’s Twitter page, it’s time to start. Many images (such as the video slipcase art) appear there before anywhere else. He also shares the latest projects direct from his modeling studio. Catch up with his April activities in a gallery here. 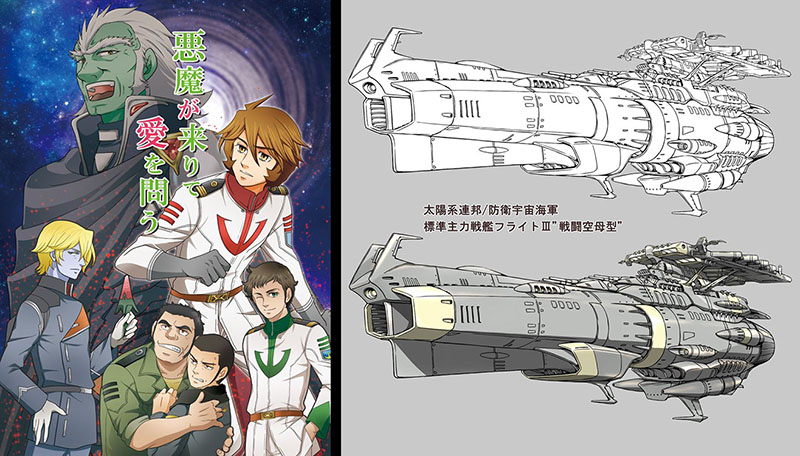 Fans covered the gamut in April with something from every corner of Yamato world.
See a character gallery here and a mecha gallery here. 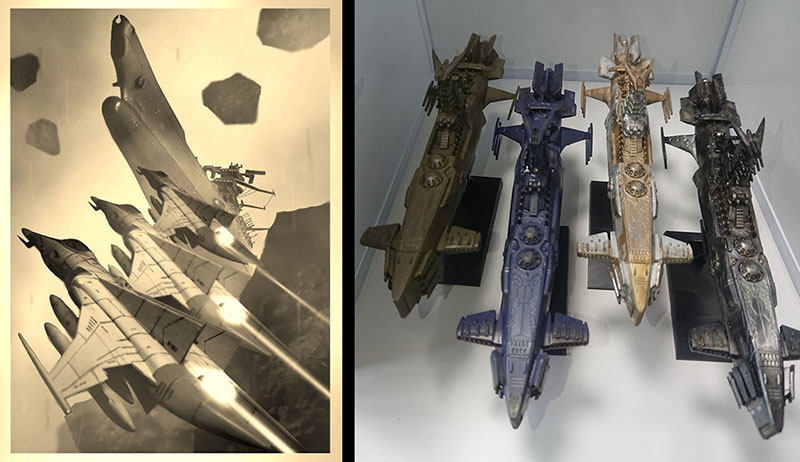 For some reason, April was a GIGANTIC month for modelbuilding at multiple levels from interesting paint jobs to radical kitbashing to complete 3D printing. Get your gawk on with a GIGANTIC modeling gallery here. 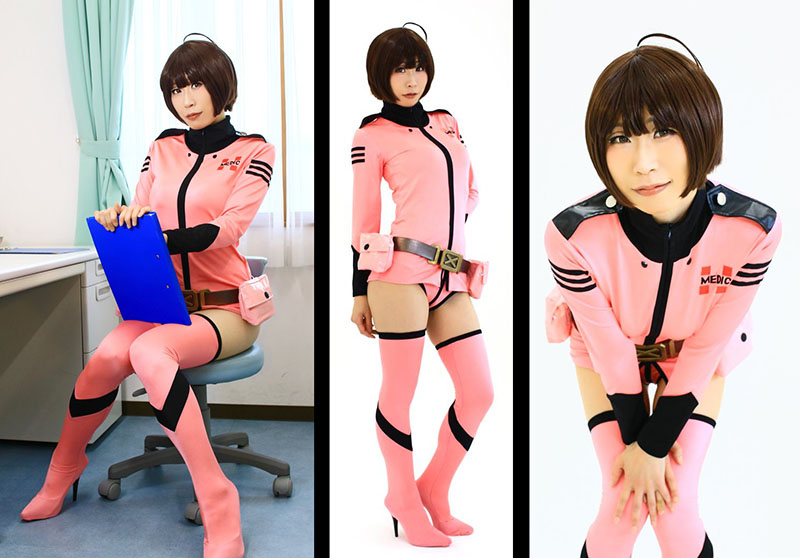 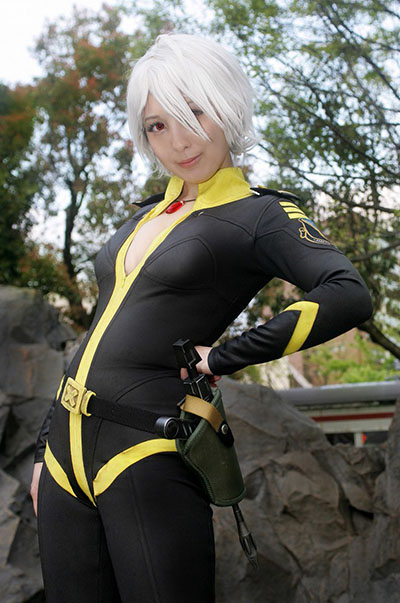 Cosplayers were rare but feisty in the month of April.

Above we have the prolific Harunosuk as nurse Makoto Harada, and at right is Potechi as a spirited 2199-era Yamamoto. (She announced on Twitter her intent to do a 2202 version as well.) See a bigger photo here. 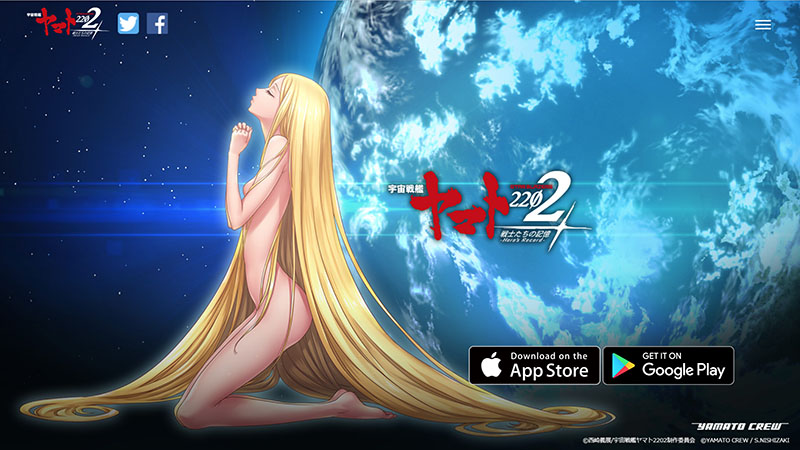 The Yamato 2202 mobile game Hero’s Record is still ongoing, and even if you can’t work through the language barrier to play it there is still plenty of artwork to feast your eyes on. Check in at the official website here and the Twitter page here. 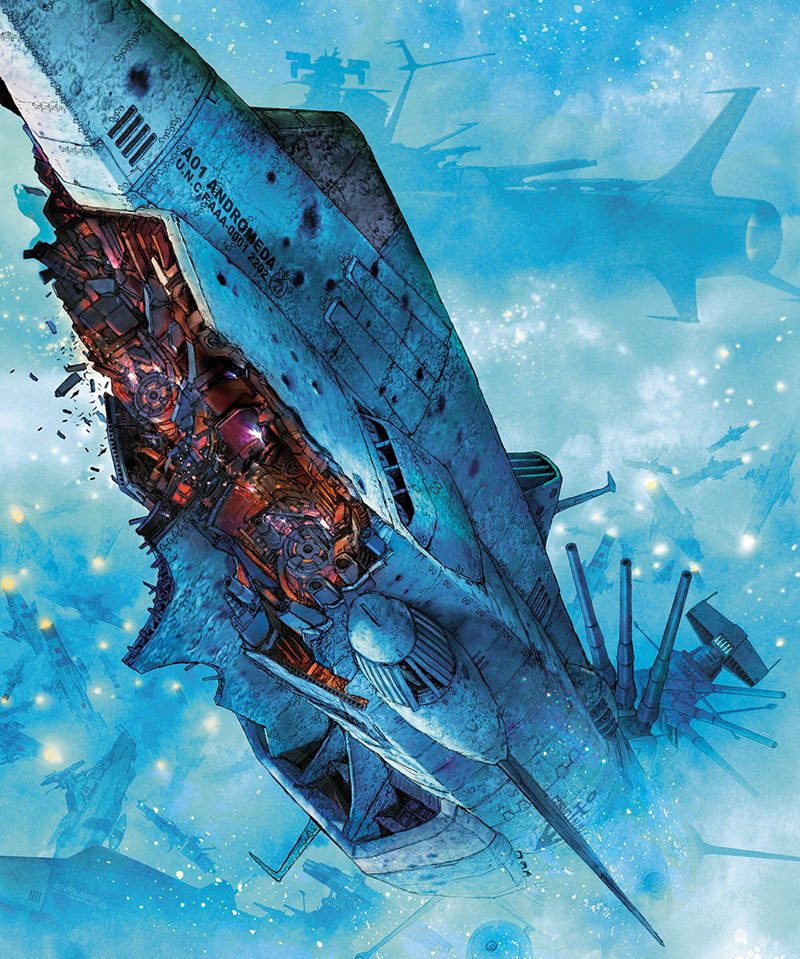 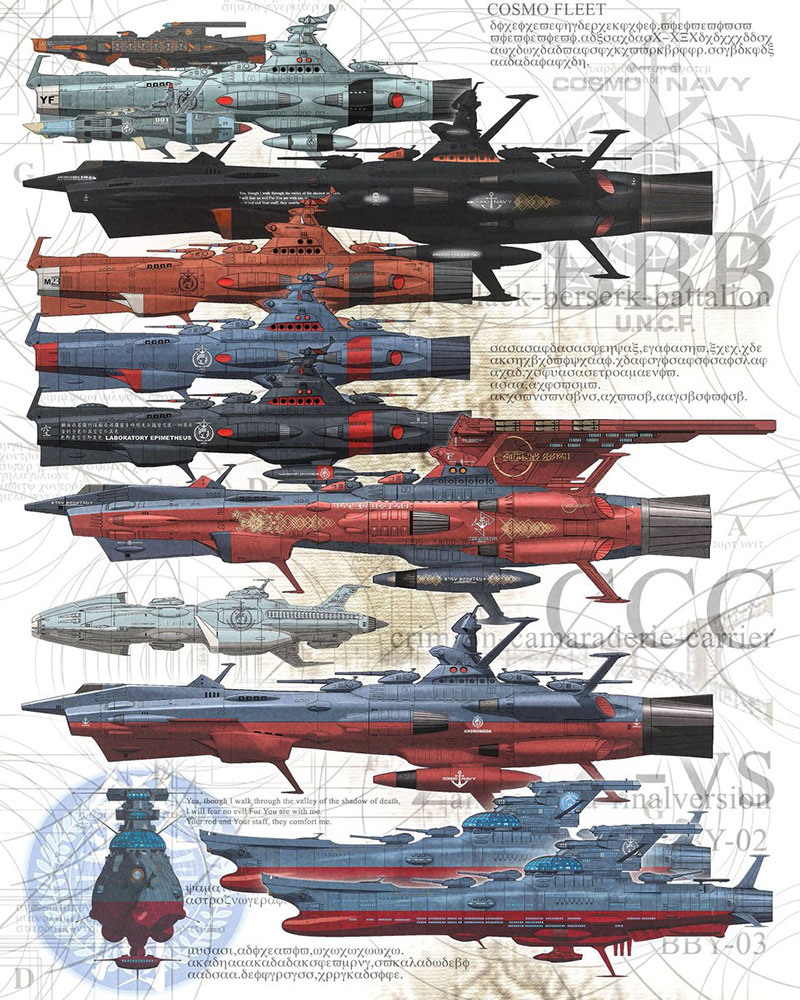