Chapter 1 got its first-ever free TV broadcast in a presentation hosted by voice actor Eriko Nakamura for Abema TV, known as “Everyone’s Anime Channel.” It was shown at 2pm and midnight on May 18, and fans who retweeted the announcement on Twitter were entered into a prize lottery for a Chapter 1 poster autographed by Nakamura. 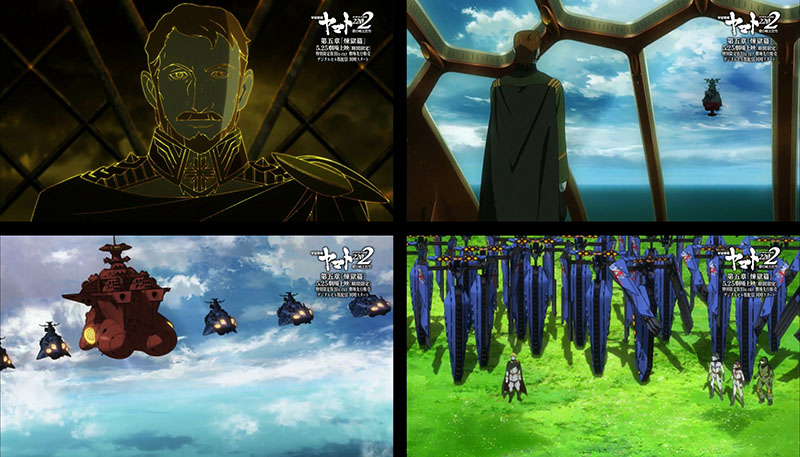 With the countdown now down to its final week, the first substantial look at Chapter 5 came online. Two videos were released on Youtube and Nico Nico: a digest for Chapters 1-4 (watch it here) and the opening footage of Chapter 5 (watch it here). This gave us our first look into the history of Garmillas and the rise of Dessler through a series of flashbacks leading us back into current continuity; it turns out to be Teresa looking into Dessler’s mind. Though touted as a 10-minute preview, the amount of new footage actually came to about 8 minutes.

Dengeki Hobbyweb posted both videos in an article here that also announced a TV special called Just before launch!! TV special of love! It would feature the digest, the preview, and an on-camera interview with voice actor Hiroshi Kamiya (Klaus Keyman). Narrated by voice actor Moriya Satomi (Miki Saijo), it ran on Tokyo MX May 19 and BS11 on May 20.

Right in sync with the preview footage came these three new entries into the character guide at the official 2202 website. See our own fully-translated version here. 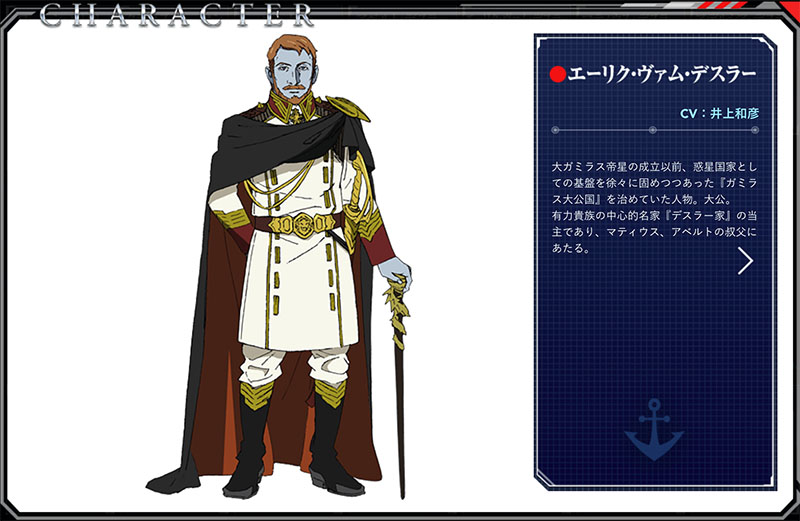 Grand Duke. Before the formation of the Great Garmillas Empire, he ruled over the “Garmillas Archduchy” which gradually consolidated its foundation as a planetary nation. A powerful aristocrat and head of the noble “House of Dessler.” Uncle of Mattheus and Abeldt. 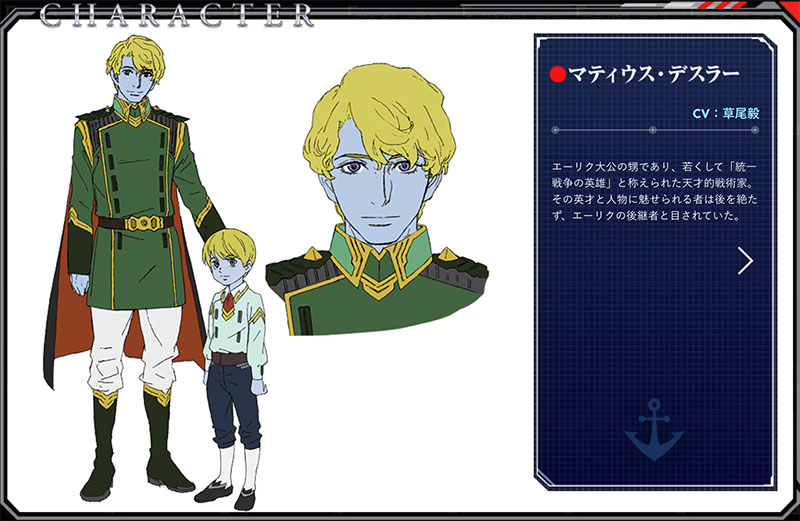 Young nephew of Grand Duke Erik, a genius tactician praised as a “Hero of the Unification War.” An unusually gifted person of great charisma, seen as Erik’s successor. 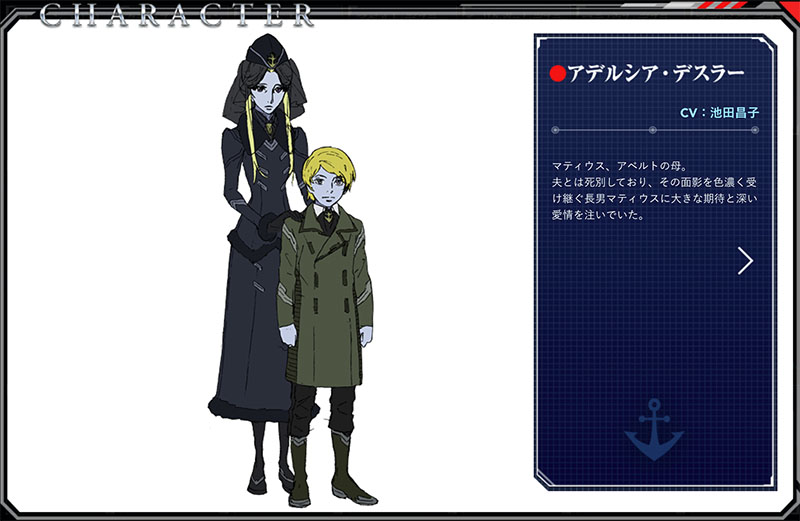 Mother of Mattheus and Abeldt. After losing her husband, she poured deep love and expectations into Matheus, who closely inherited her features. 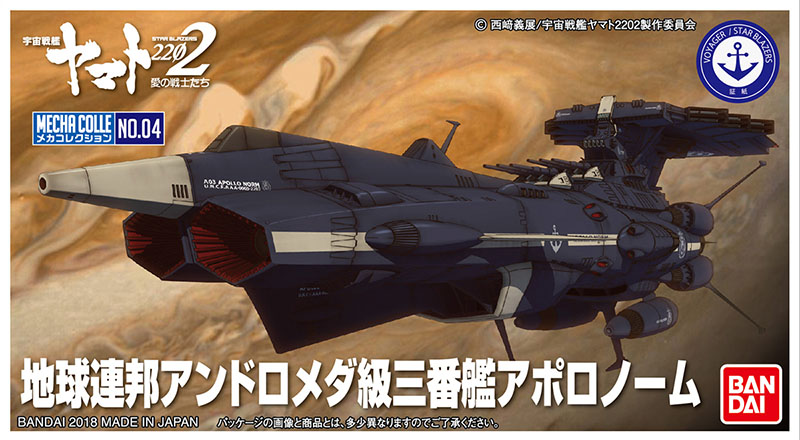 Apollo Norm joined the realm of mini-models on this day with a new release from Bandai. Though molded in blue, it was possible to repaint in grey to represent Antares (alternate name decals were included), then combine both with repainted Andromeda models to fill out the entire 5-ship armada.

As Chapter 5 approached, a new wave of promotional interviews started with a completely new voice from the staff: Producer Hiroki Komatsu.

The latest work of the popular anime Yamato 2202, Chapter 5 Purgatory Chapter, will be released on May 25. It is full of highlights from human drama to a powerful fleet war. We talked with Xebec Producer Hiroki Komatsu about the story behind its production.

“There are still two chapters left,” he said looking back, “but we finally made it this far. I had a difficult time at first, but I got on track. It was hard to understand and that was a painful phase. There are places where we use 3D work, and the troubles there have decreased. For example, explosion scenes were processed in 3D, but patterns could be created. The number of options has increased, but we’re trying new things in every chapter.”

One of the attractions of Yamato 2202 is the flashy fleet warfare. Yamato is a huge battleship 333 meters long, which leads to powerful images. Mr. Komatsu emphasizes Yamato‘s enormity.

“It’s a big fleet, so we try to give a huge sense of size. When Yamato is made with 3D it doesn’t look that big depending on the shot, so there are scenes where it’s tripled in size. Its movement is also important. When it’s too fast it looks lighter and smaller, so it may slow down.”

“Dessler’s story comes to the forefront in the first half. It was difficult, but I think it is depicted well. In the second half, we have a powerful fleet battle.”

It seems to become more enjoyable when we see the skills of the staff in fleet warfare. But there are hardships when it comes to drawing familiar characters such as Susumu Kodai and Yuki Mori.

“In terms of art direction, there are strong characters and weak characters. Kodai, Yuki, and Dessler are especially difficult. The difficulties seem different for each artist. There are more lines compared to other works, and the number of people who can draw them is limited. It takes time to understand the designs. When storyboards come up, we do a lot of adjustments.”

“Mr. Habara believes it’s good to hear everyone’s opinion. He incorporates opinions from Mr. Kobayashi and Mr. Fukui. It’s difficult to compile everyone’s opinions, but he doesn’t give up. Mr. Kobayashi is creative and can solve things in ways I never could. Various opinions have been given and it was scary in the beginning, but recently I’ve become able to read it,” he said with a sigh.

Mr. Komatsu feels that Yamato is a masterpiece. “I was anxious at first, but it’s been a great experience. I think it will become nourishment for the future. Good things have been done. But it’s not over yet.” (Laughs) 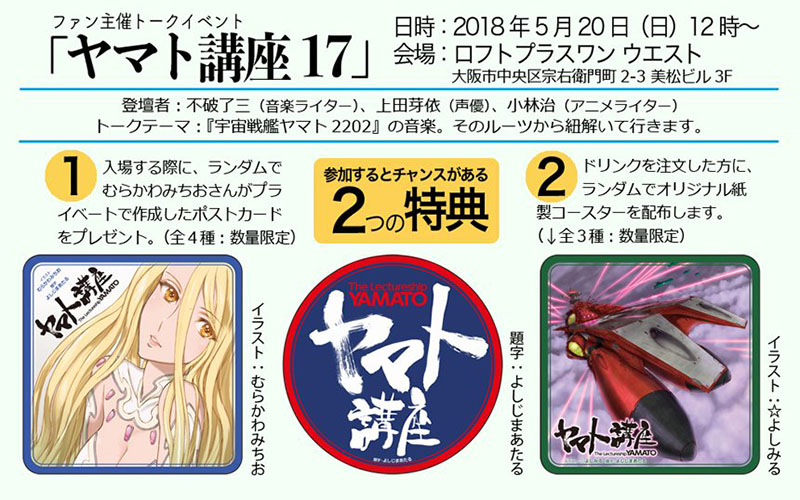 This installment of the continuing series of fan talk events took place in Osaka at a venue called Loft Plus One West. Host Osamu Kobayashi moderated a discussion with two guests about Yamato music. No details were published, but you can visit the Yamato Lecture website here and Twitter page here. 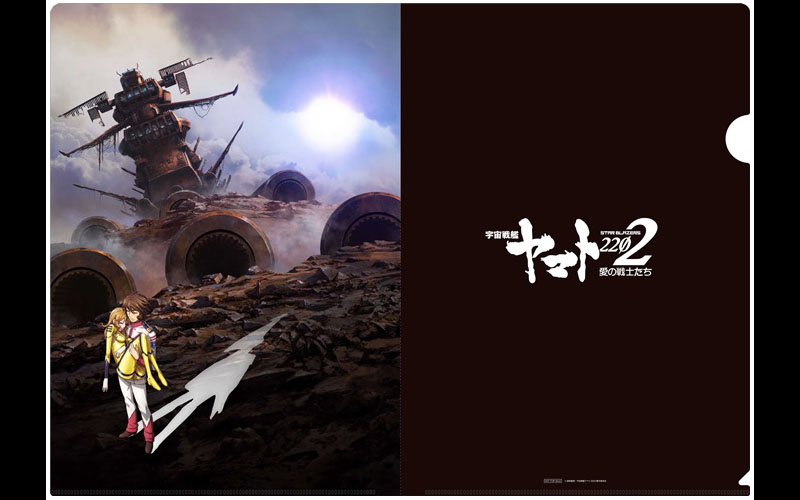 The push to sell advance tickets for future chapters begins with the imminent arrival of a new chapter and gives us our first view of promo art. This foreboding image was the first to be revealed for Chapter 6, published on a clear file with advance tickets sold online and in theaters. 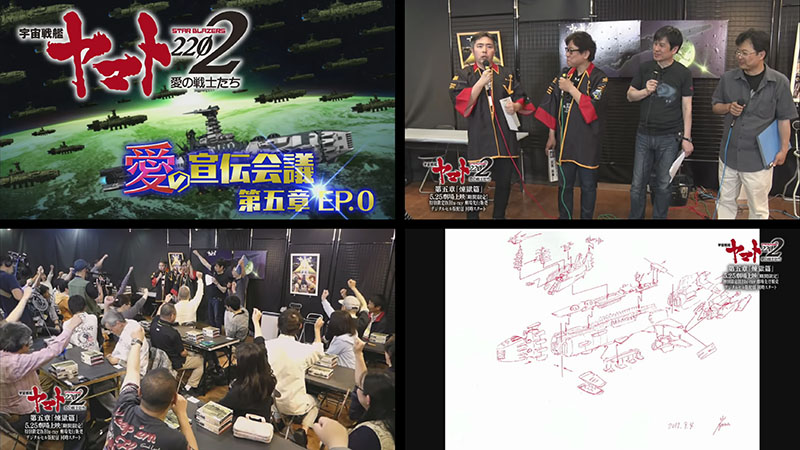 May 21: Promotional Meeting of Love, Episode 0

The first in a new daily series of these mini-talk shows began with Episode 0: Let’s all make a Legionnaire Cannon! It was shot a month earlier at Yamashiroya toy store in the Umeda district of Tokyo at the modeling event previously covered in Report 21. On April 21, Director Nobuyoshi Habara and Writer Harutoshi Fukui presided over the building of dozens of Kalaklum models to combine into a Legionnaire Cannon, joined by Bandai modeling exec Hirofumi Kishiyama. This 18-minute episode shows the event itself followed by a Q&A session moderated by Osamu Kobayashi.

One of the questions was about the date of Keyman’s birthday, to which Fukui replied November 5 since “I objectively feel that Keyman is a Scorpio.” 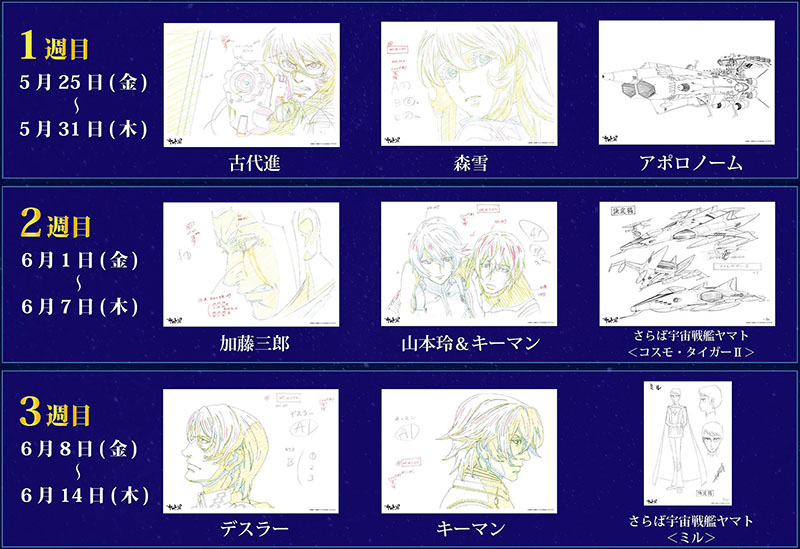 Fans were given yet another reason to see Chapter 5 (like you need more?) when the free handouts were revealed online, sets of three art cards with images old and new. The sets would be given away for each of the three weekends Chapter 5 was in theaters. 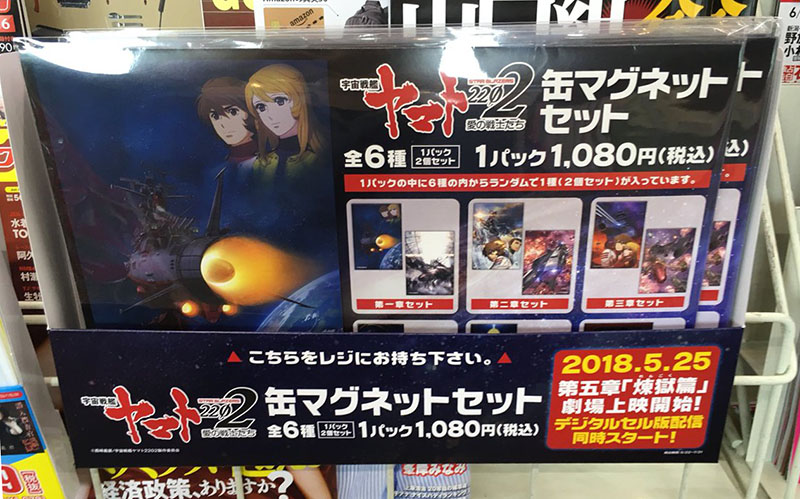 Lawson convenience stores drifted back onto the Yamato radar on this day when specific shops began selling 2202 magnet sets. 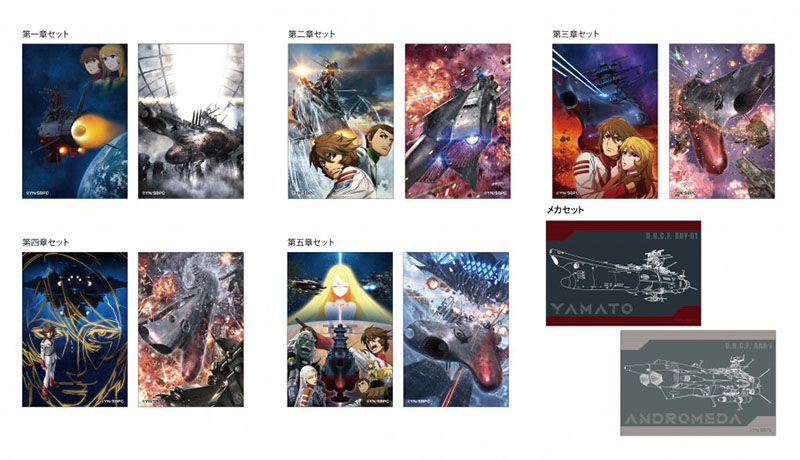 Six individual sets of 2″x3″ magnets were available, one set each for Chapters 1-5 and another with mecha art. 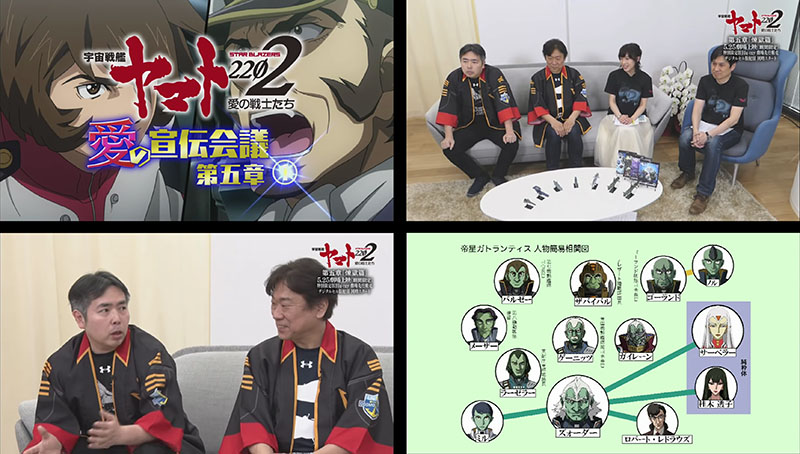 May 22: Promotional Meeting of Love, Episode 1

The countdown to the premiere seriously got underway with this video, which returned to the talk show format with Nobuyoshi Habara, Harutoshi Fukui, voice actor Eriko Nakamura and host Osamu Kobayashi. The topic for this 17-minute episode was “the story so far” (part 1). 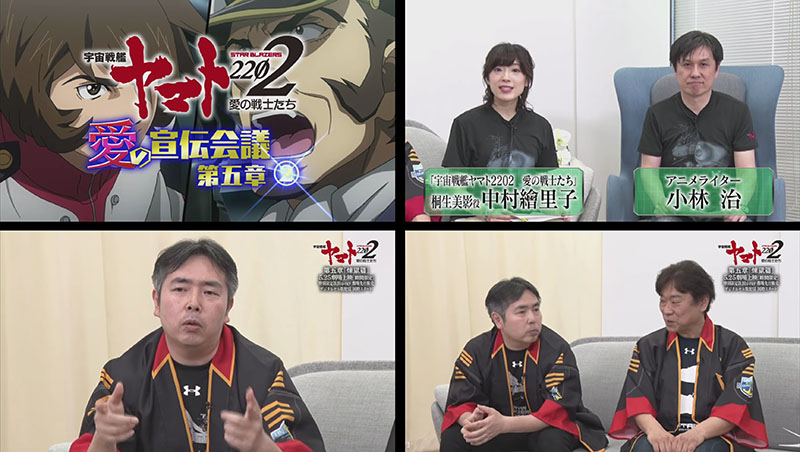 May 23: Promotional Meeting of Love, Episode 2

You can’t have a part 1 without a part 2, so discussion of “the story so far” continued for another 16 minutes. See it on Youtube here. 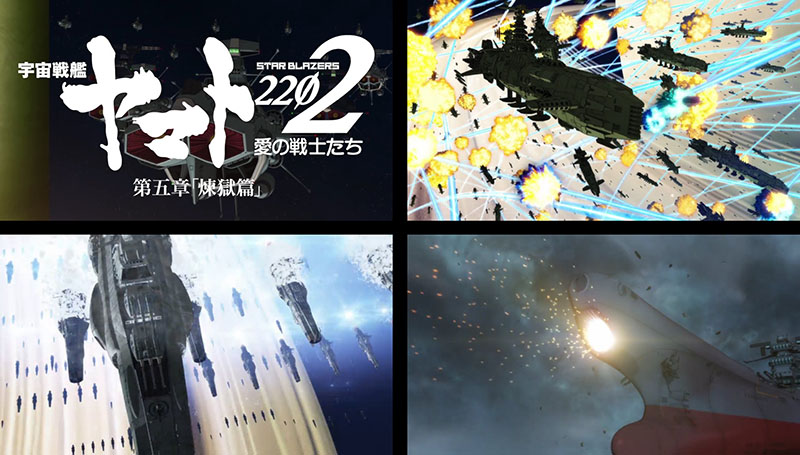 New trailers are always the best part of a premiere countdown, and this one was loaded with prodigious images from the Battle of Saturn.

This round of staff & cast interviews was less intense than previous chapters, but added new voices to the chorus. On May 23, we got two more interviews with Producer Hiroki Komatsu, one from Akiba Souken (read it here) and one from Gigazine (read it here). 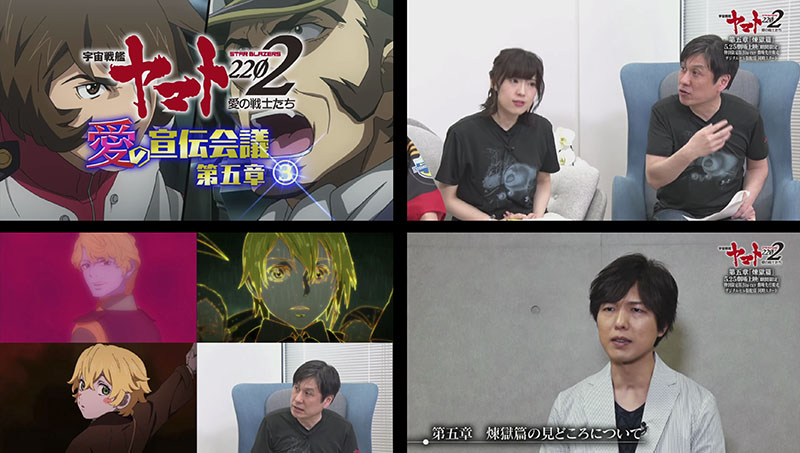 May 24: Promotional Meeting of Love, Episode 3

On this last day before the premiere, discussion advanced from “the story so far” into new territory to examine “Secrets in the trailers.”