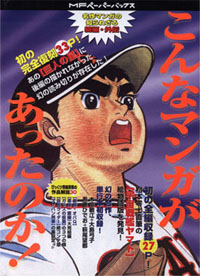 The Space Battleship Yamato phenomenon is so widespread that even its Japanese fans can still dig up an occasional surprise decades later. One case in point was revealed in the book shown at right, This is Manga! Published by Media Factory in November 1999, it explored the origins and influences of classic manga titles such as Astro Boy, Star of the Giants, and Ninja Kamui.

Included in its pages is a complete reproduction of a Space Battleship Yamato picture story, written by Keisuke Fujikawa and drawn by Leiji Matsumoto during the production of the first TV series. Serialized over six issues of Fifth Grader magazine (Feb 1975 issue shown above), it retold a highly-condensed version of the story in just 29 pages and was never seen again.

The author of the book painstakingly resurrected this unique piece of Yamato history in consultation with Matsumoto and the original publisher, then reproduced it in This is Manga!, accompanied by an interview that shed new light on a forgotten treasure. 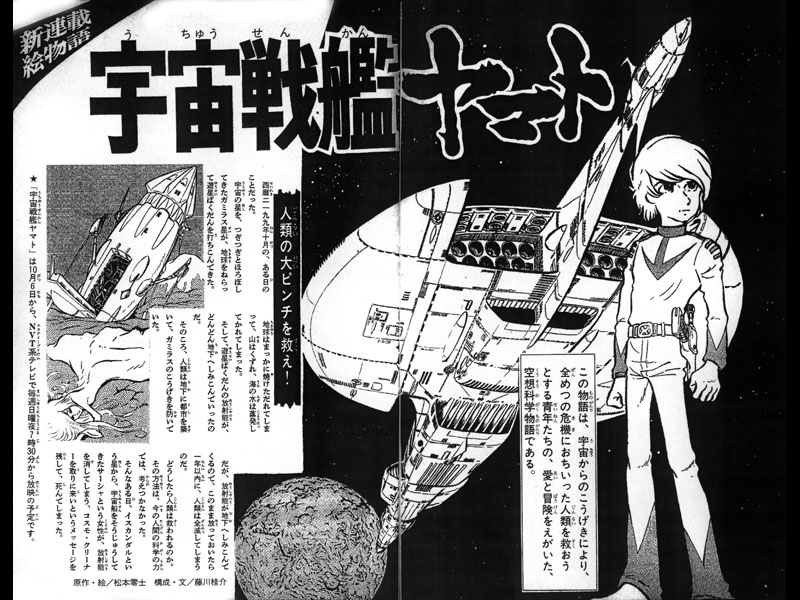 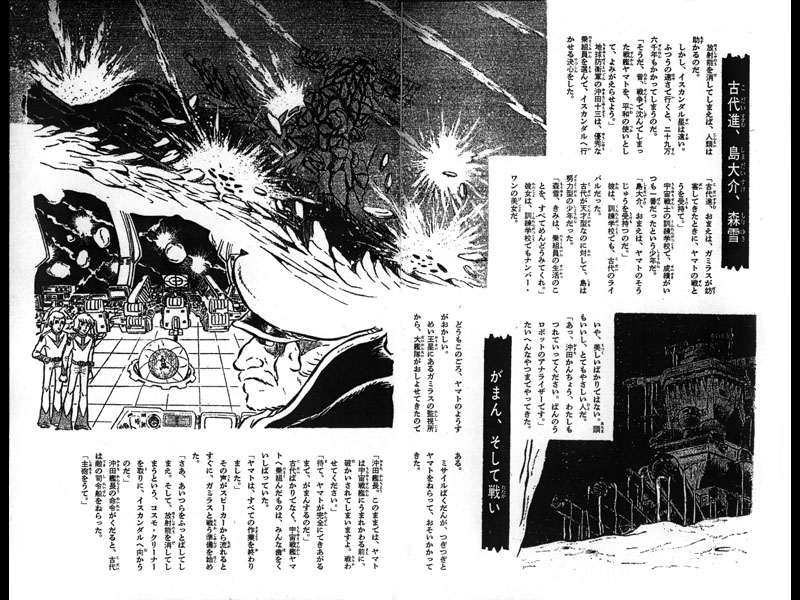 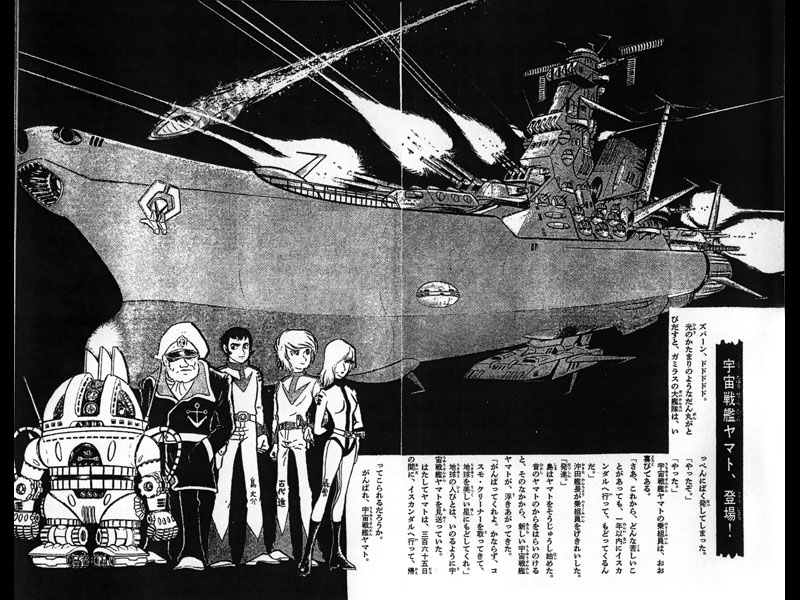 Yamato caused many big booms in its time, and has reached its 25th anniversary in 1999. Its greatest achievement was to make it easier to grasp big concepts through SF. Now we are privileged to be able to see Yamato anime and manga whenever we want. But an acquaintance of mine recently asked if I’d ever read the old picture story version.

Picture story? I couldn’t remember this at first, so I thought it was a joke. But when I proceeded with the investigation, I found that it really existed.

It began quietly in the October 1974 issue of Shogakukan’s Fifth Grader magazine. There was no announcement in the previous issue, or anything on the cover about it. There was no mention of Leiji Matsumoto’s art or the text by Keisuke Fujikawa, Yamato‘s scriptwriter.

It should be considered an important work. Yamato in picture story form is a connection point between anime and manga. Apparently, this version was forgotten amid the simultaneous premiere of the anime on TV and Matsumoto’s manga in Adventure King magazine.

It was not possible to reconstruct it from the state it was in [directly from back issues of the magazine], so I contacted Leiji Matsumoto to ask for details about it. It became a mission. 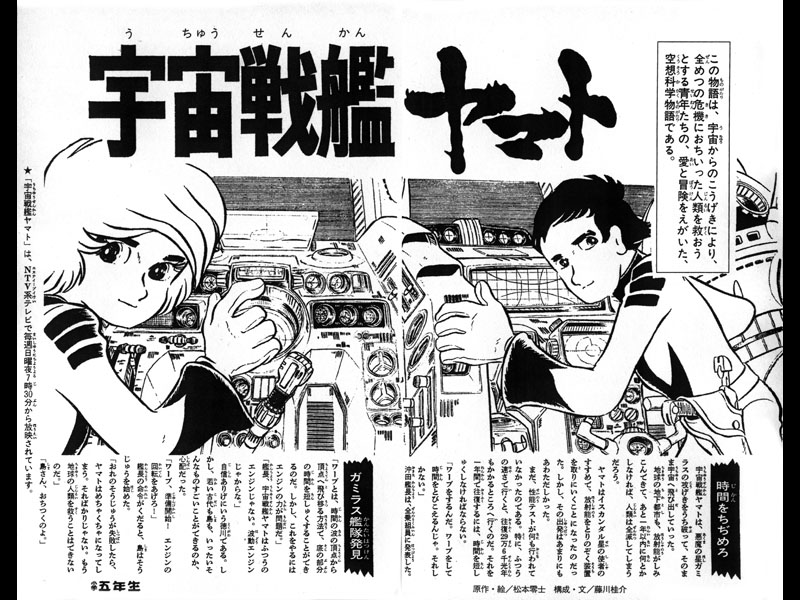 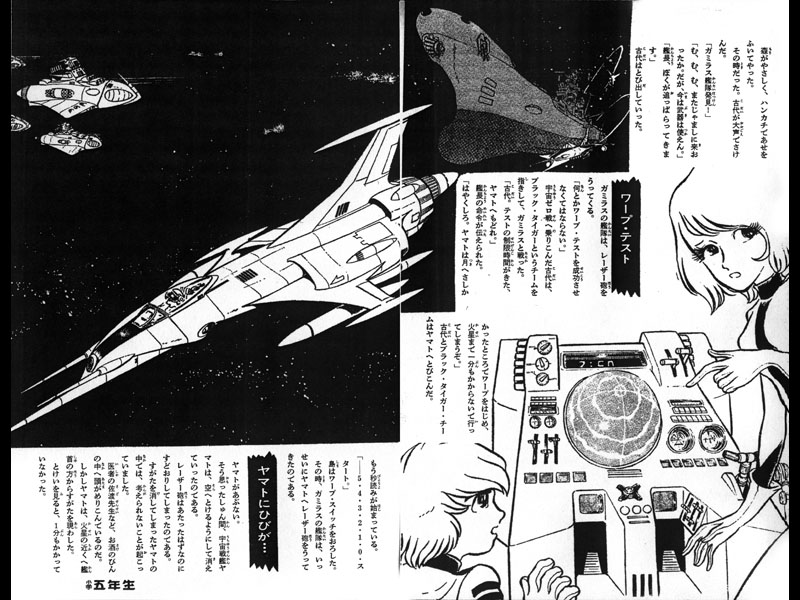 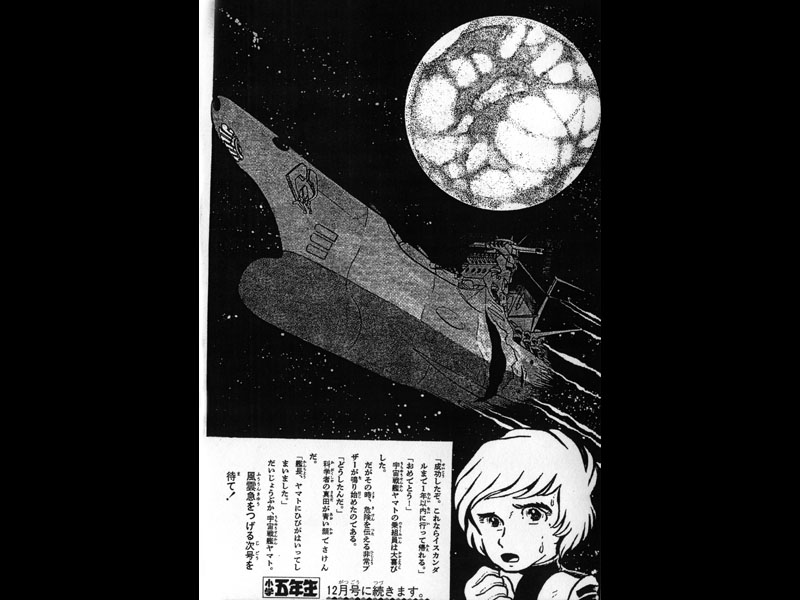 Interviewer: What can you tell me about the Yamato picture story?

Interviewer: Can you tell me about its circumstances?

Matsumoto: It was done as part of Yamato‘s overall development along with the manga and the anime. Because most of my effort went toward the anime, I drew a considerable number of storyboards. I also drew cels of Starsha myself. Developing this picture story was a small side project. I never thought there would be enough time for both, and together they would kill me (laugh)!

Interviewer: Why was this narrative style chosen?

Matsumoto: It was to make it unlike the manga version, with text written by Mr. Fujikawa.

Interviewer: Did you know Mr. Fujikawa before then?

Matsumoto: I hadn’t met him before Yamato, but I did have the honor of seeing his work. I liked his way with words and the relationships he constructed. 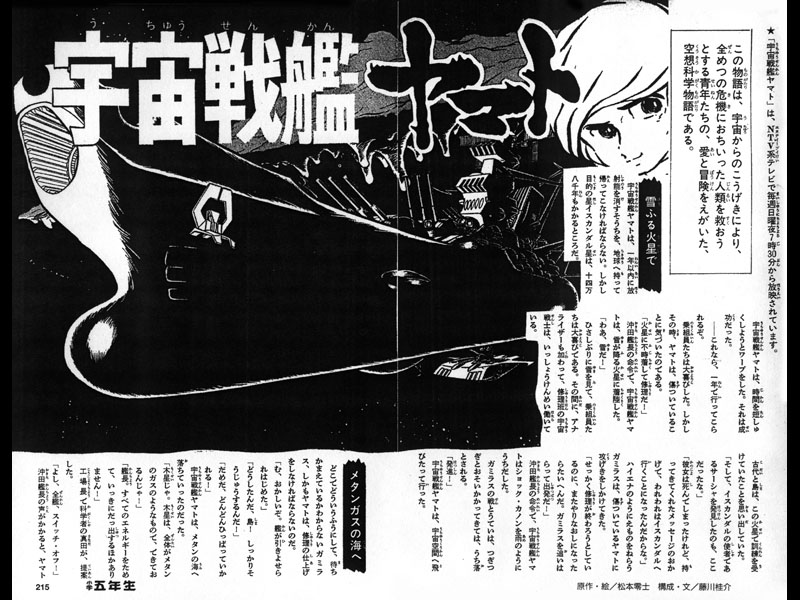 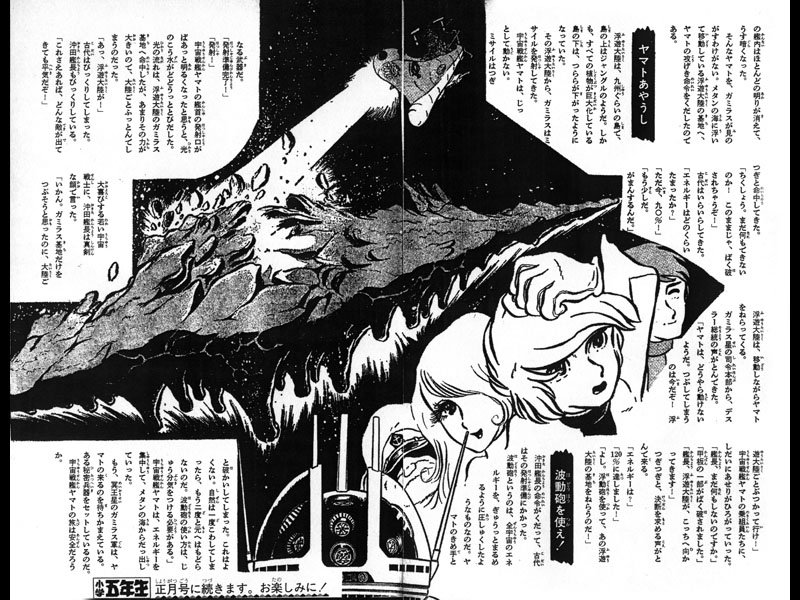 Interviewer: Which came first, the writing or the artwork?

Matsumoto: I think it was the writing. It followed the scripts from the anime.

Interviewer: What about the pictures? Compared to your manga, Kodai and the others look like little boys.

Matsumoto: I reduced their ages a bit since it was meant for children. But the machinery was all done in my normal style. I was still young at the time, just 36. Everyone on the staff was there to fulfill a dream. Making money was secondary to that.

To be honest, some of the designs were taken from my previous works. The spaceship from Iscandar came from the Machiners series [1969-70]. I thought it was one of my best ideas, so I reused it here without hesitation. Sasha’s landing capsule came from The Machine Acolyte [1970-72].

Interviewer: I think this was your best [design] work from 1974.

Matsumoto: It gave a good impression of scale. Now actual combat warships have bridges like those I designed.

Interviewer: Your design might have actually influenced those who build them.

Matsumoto: It matches our prediction that there would come a time when battles would be watched on a moniter. 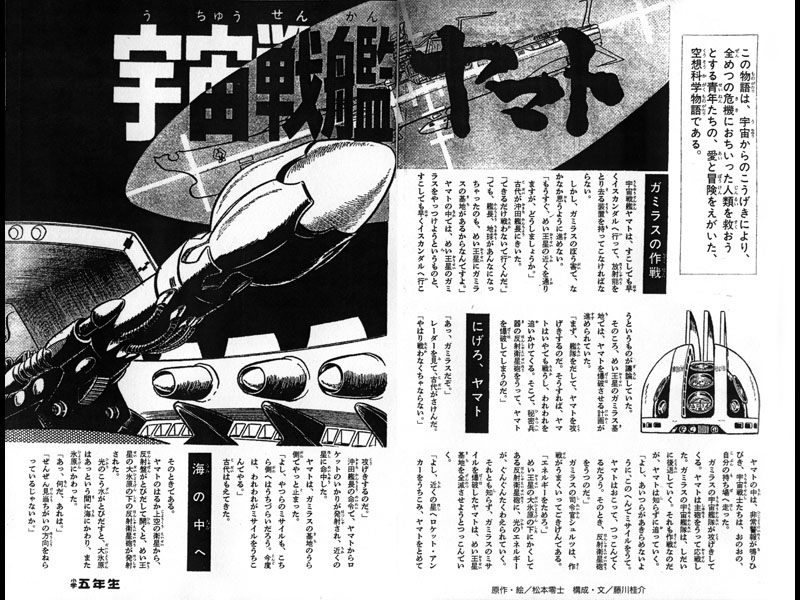 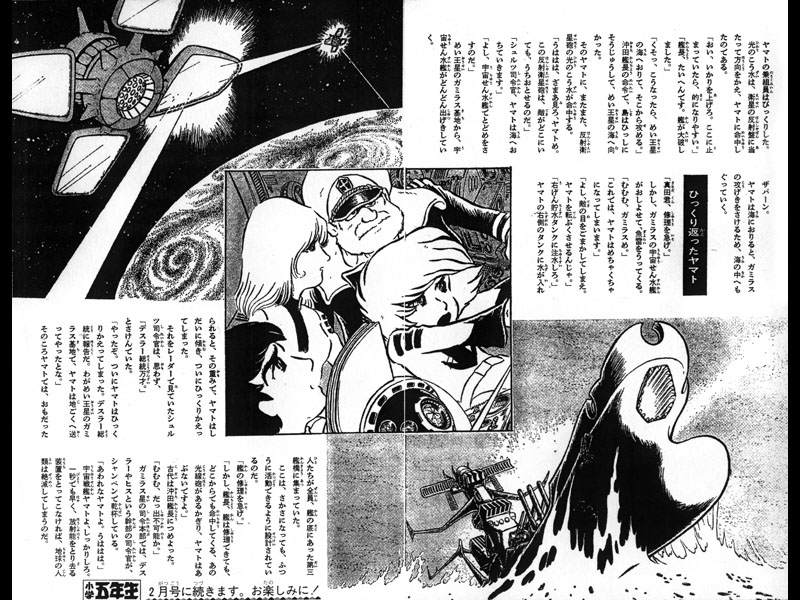 Interviewer: Were you familiar with the picture story format from your childhood?

Matsumoto: Both that and manga. Artists like Shigeru Komatsuzaki, Souji Yamakawa, and Tetsuji Fukushima drew stories in this style.

The hybrid of manga and picture story was Adventure Child Putcher by Yokoi Fukujiro. It was a combination of manga and text. He seemed to draw everything in fountain pen. I liked the rough look of it. I have a thing about precision machinery. Even though it was so rough, it served as a reference in my childhood.

But it wasn’t just things from Japan. I grew up in Kitakyushu, where there was a mountain of U.S. and coalition forces until the time of the Korean War. All the soldiers were young, so they had comic books, 10-cent comics of Superman and Batman, so they were as familiar to me as my schoolbooks. After that, there was Barbarella from France [in the early 1960s]. I visited foreign bookstores when I moved to Tokyo and found wonderful titles like Vampirella. I tried to mix some of that influence into my style. 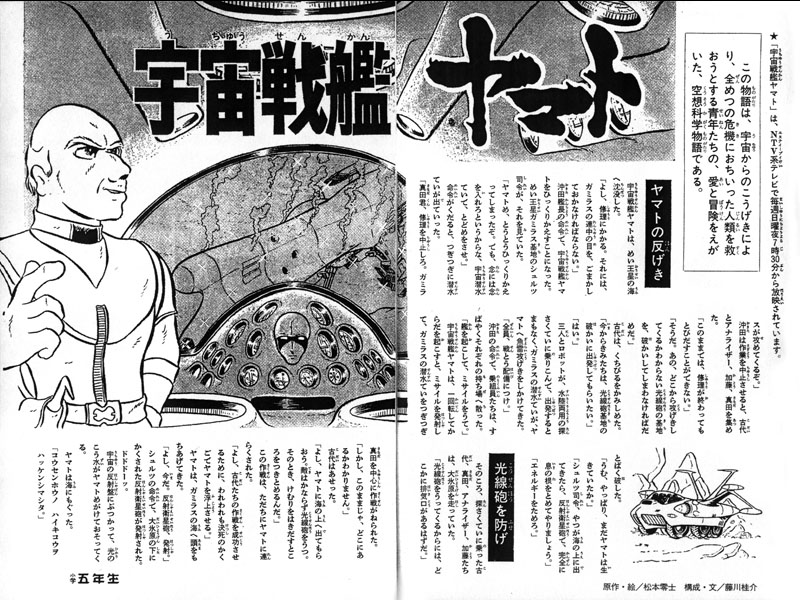 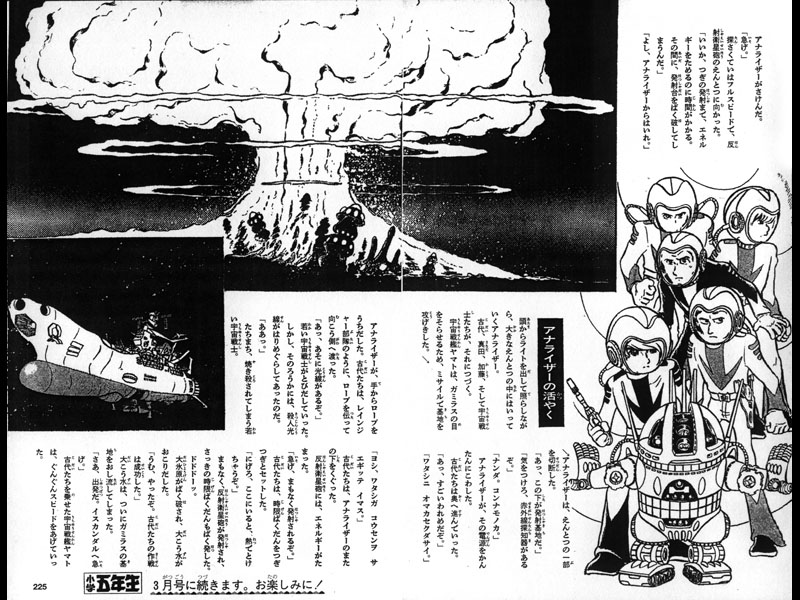 Matsumoto: I was also intensely interested in mechanical things. When I got my driver’s license, I bought a car that had been in an accident. It was a sports car that had been broken in half, and was welded back together. The shape was different on the right than on the left. But all the gauges worked, so it was still good.

I remember one day I was in a rush to deliver pages of the picture story and the engine caught fire. I ran into the office and grabbed their fire extinguisher to put it out (laugh).

Interviewer: Do you still have an attachment to the Yamato characters?

Matsumoto: I still like the main characters; Captain Okita, Kodai, Yuki, Sanada, Dr. Sado, and Analyzer. The original design for him was two robots that would combine to form his right and left sides. 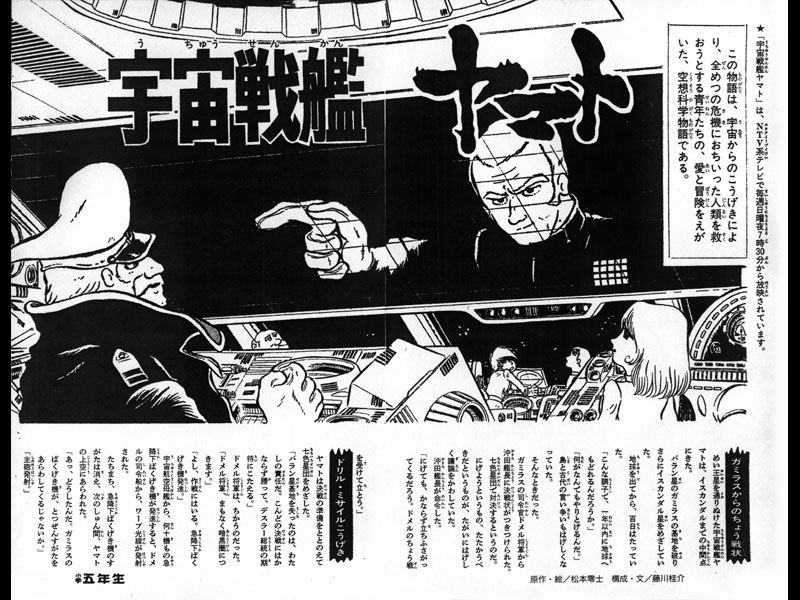 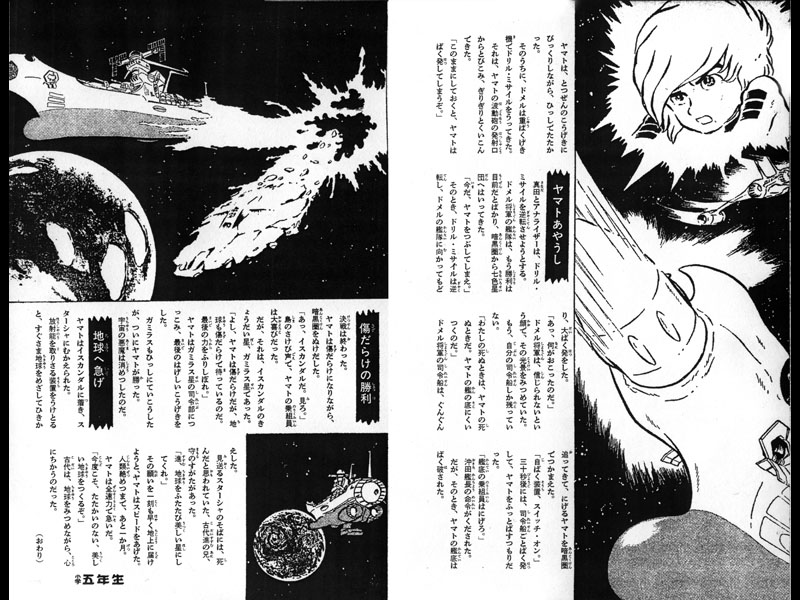