As the art director of Yamato 2202, Mr. Tanioka is involved in building the world view. It was seeing Yamato when he was young that decided his involvement. Here, we listen to his Yamato love and the feelings hidden in the art of 2202. 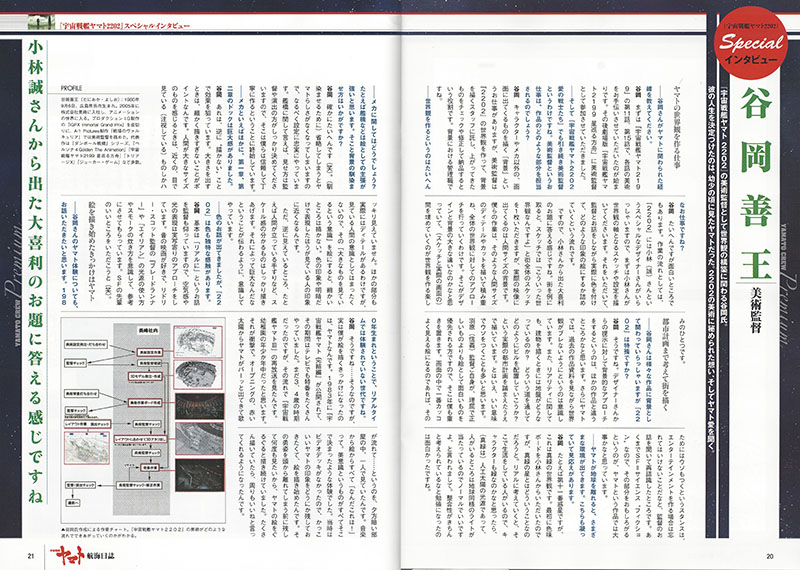 The work of making the Yamato world view

Interviewer: Please tell me how you came to be involved with Yamato.

Tanioka: I started by helping out with the art on Yamato 2199 episodes 11 and 15. After that, I participated as the Art Director for the feature film, Ark of the Stars.

Tanioka: Besides the character and mecha, there is everything else on the screen, and although there is a job called “background,” the art director makes the world view of 2202. I entrust the staff to create the backgrounds, and it’s my role to check and deliver what they come up with. I’m the manager of the background. 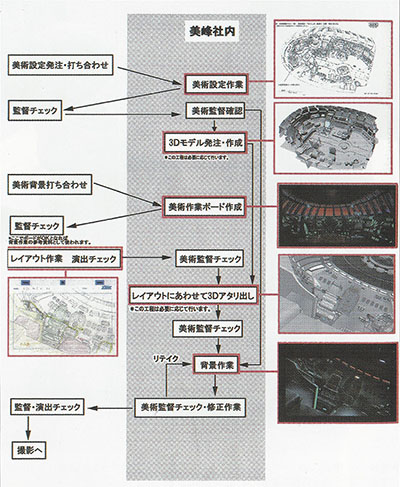 A work chart by Mr. Tanioka. Here you can see the flow of how
2202 art is completed.

Interviewer: Making the world view is a lot of work, isn’t it?

Tanioka: It’s hard, and it’s also very interesting. As for the work flow, 2202 has a special designer named Makoto Kobayashi. First, he sketches the concepts that become the axis of the world view. I receive that and talk with the director as I color it. It’s a flow to decide what kind of impression the image will make.

Therefore, it’s like answering the subject brought up by Mr. Kobayashi. If you take a city for example, the sketch says, “This is the world view,” and it will be a sketch of an empty city, but the actual finished visuals will be a background at human scale. Our task is to draw detail and build up shots at human scale, and that approach leads us to the overall world view. I think there’s a big difference between a design and a background (a sketch and the final visual), and filling in that gap is one of the pleasures of creating a world view. 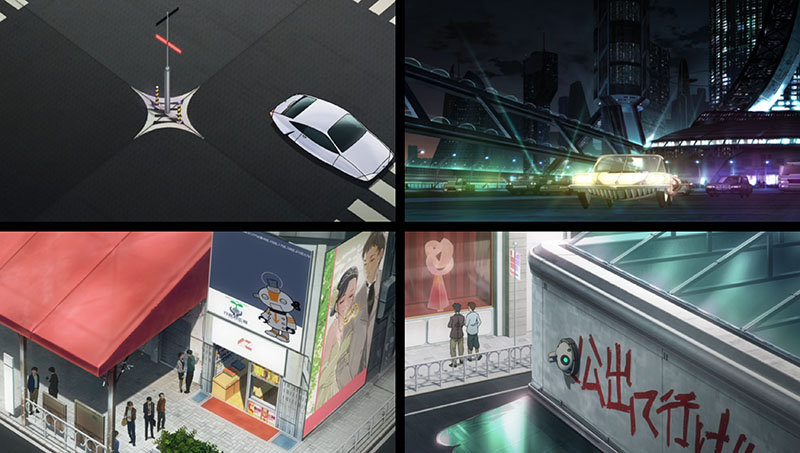 Thinking about city planning while drawing a city

Interviewer: You’ve been involved in various works creating backgrounds, but is there something special about 2202?

Tanioka: That’s right. I think the approach of making a background from the presentation of a designer is different from other works. In Yamato, I’m conscious of examining the past materials so as not to blur the world view. Also, with regard to reality, what is the foundation like when drawing a building? How are the buildings arranged along a roadway? We draw it on the basis of actual city planning.

However, I think we’re cheating in a good way. That’s because Director Nobuyoshi Habara is one who gives priority to things that make up an interesting visual rather than a theoretically correct one, and I put a lot of emphasis on that. If it becomes a visual that looks coolest on the screen, our stance is that even if we’re cheating it, we must not forget that we’re making entertainment. I recognized that after hearing it from the director. SF stands for Science “Fiction,” and that’s the fun part. I think that’s important in the work called Yamato. 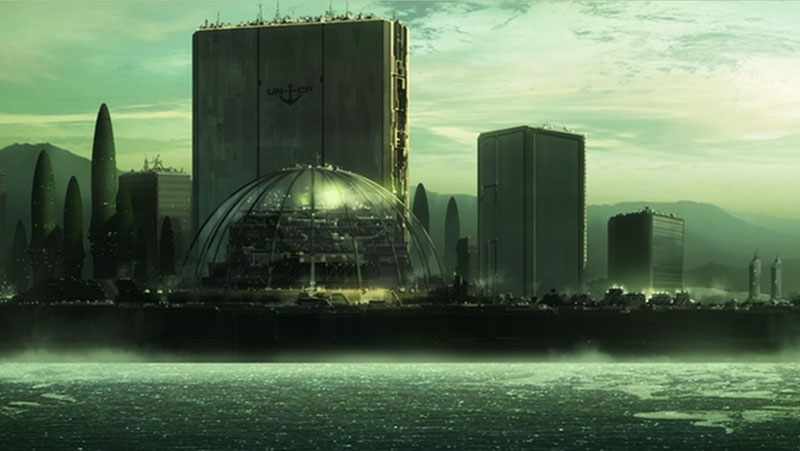 Tanioka: For example, with the 11th planet, there is a truly green world view. First, I received a color board from Mr. Kobayashi. What does it mean to be a truly green planet? We have to think realistically because there are people living there. I thought that if a character was green, their light source would be the artificial sun, and there would be a place where people have the same light as Earth, so normal would be OK. That’s what we came up with, and it was a fascinating study to properly think through that consistency.

Interviewer: What about mecha? For example, I think the assertive visual of a bridge is strong. How is it adapted to the background?

Tanioka: It’s definitely hard to make them match. (Laughs) If you leave it out, the Yamato quality will be lost, so I try to be as faithful to the concept as possible. As for the bridge, the director decides what to show and how to show it, and they trust us to make it carefully from start to finish.

Interviewer: Speaking of mecha, the docks in Chapters 1 and 2 had a huge feeling.

Tanioka: Conversely, I aimed for an effect of “don’t draw it.” The point was not to draw too much fine detail when sizing it up. When a human being encounters something large up close, you judge it with your eyes (gazing at it) and you only see part of it clearly. The other parts of it actually have detail, but you’re not conscious of that. So when you make a visual with the “consciousness of seeing something large” you don’t draw the small details. It’s close to the impression of a person in color expressed only in light and dark shades.

However, an example of the opposite is a handrail where people are standing. I’ll draw that with a solid feeling of scale. I’m conscious of communicating the fact that something is large.

Interviewer: 2202 also has a unique sense of color.

Tanioka: Because the director also talks about “realism,” the expression of air and light has a live-action approach. I like older movies, and I’m conscious of how Ridley Scott used light sources and smoke in Alien and Blade Runner. I refer to them. I’m trying to get a good grade in SF from my seniors. (Laughs) 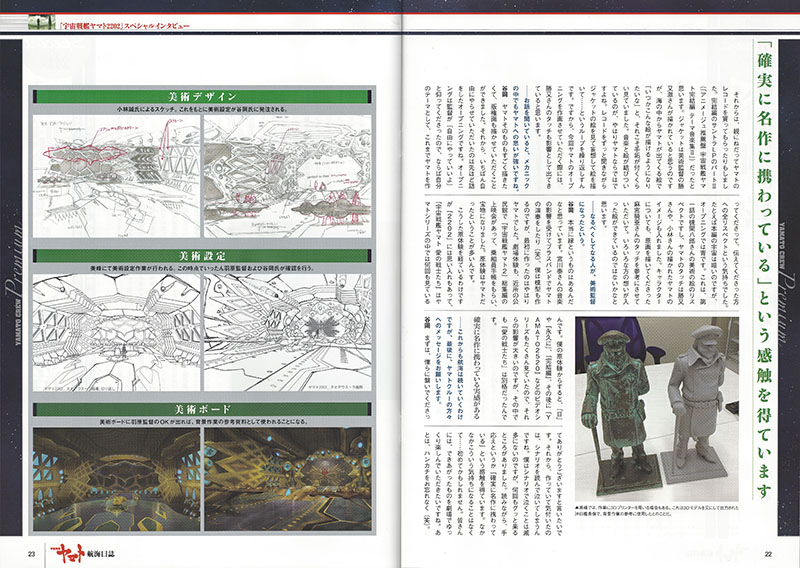 The reason I started drawing Yamato

Interviewer: I’d like to talk about your Yamato experience. You were born in 1980, so you weren’t in the generation that experienced it in real time.

Tanioka: That’s right…but in fact it was Yamato that inspired me to draw. Final Yamato was released in 1983, and during that time there were a lot of specials on TV. I was still just three or four years old, but in the flow of that I saw a rerun of Yamato III. I think I was just short of kindergarten. It had an impact. Yamato came out of the red sun in the opening and the song played…I watched it alone in a dark room one evening. Everything from the visuals to the music. “What is this!” It was an experience that decided my whole sense of aesthetics right there. 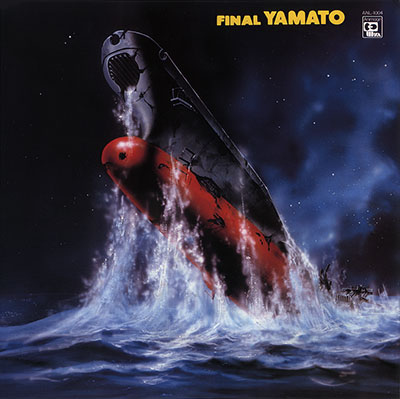 Since there was no home video at the time, I wanted to preserve that cool impression of Yamato somehow, so I started drawing. I wanted to see it many times before that bold figure left my head, so I kept drawing pictures of Yamato. When I was drawing a lot, I began to notice other nice things around me.

After that, I begged my parents to buy me a Yamato record. I think it was the second Final Yamato soundtrack from Animage. I think the jacket was by the art director, Mr. Katsumata. The picture of Yamato coming out of the sea. I stared at it and got my fingerprints all over it and said, “I want to be able to draw such a picture someday.”

Yamato was unique in tying music and pictures together. I listened to that record all the time while looking at the picture on the jacket and drew a picture and entertained fantasies…and the loop was repeated. Therefore, when I drew Yamato for the opening this time, I think Mr. Katsumata’s touch also appears as an influence.

Interviewer: When I hear that story, your thoughts of Yamato’s mechanics are strong.

Tanioka: I also wanted to draw Yamato itself very much, and I wanted to draw a copyrighted picture. The opening I just mentioned was the one with the most freedom. The director said, “You can do it freely,” since my theme was that I’ve been making Yamato for a long time. I wanted to convey my feeling of total respect to those who inspired me. For example, outer space in this story is dark, but it’s blue in the opening. This is in respect for the visuals of Hachiro Tsukima in the first episode. I also put in the touches of Mr. Katsumata and Mr. Kobayashi. As for characters, I referred to the touch of Kia Asamiya, who draws key animation. I think a visual can be made with the feelings of various people.

Interviewer: It is said that a person who is capable of becoming an artist makes for a natural art director. 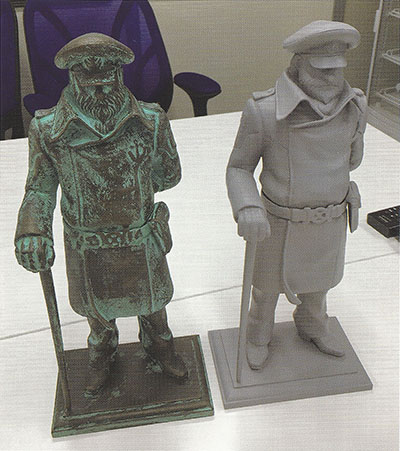 In some cases, a 3D printer is used for work. This image of
Captain Okita was output based on the 3D model, and is used
as reference in backgrounds.

Tanioka: I think there is really something called an edge. I was influenced by Hiroshi Miyagawa’s music and played Yamato in a brass band. (Laughs) I also made models, and the first one I made was Yamato. As for theater experience, there was once a screening of the Yamato 2 compilation movie at a local community center. I got a crew notebook there that became a treasure. I’ve often said that was my original Yamato experience.

Since I went through that, I have a fondness for 2202, and I’ve seen the Yamato series many times. I watched them a lot on video from Yamato III to Be Forever and Final and Yamato 2520 and they had a great influence, but Farewell to Yamato was exceptional among them.

I definitely feel that I’m involved in a masterpiece

Interviewer: The voyage continues on to the end, but please give a message to the people of Yamato’s crew.

Tanioka: First, I want to say thank you very much for connecting with us. When I realized I was making it, I read the script and cried. I rarely cry at a script, but there were many times when I came to a strong place. While reading, I got the feeling that “I’m definitely involved in a masterpiece.” There’s nothing quite like that feeling. It may be the first time. I want everyone to enjoy the complete thing slowly in a theater. And don’t forget your handkerchief. (Laughs)

Born September 6, 1980, Kure City, Hiroshima. Joined the Miho Corporation in 2005 and entered the world of animation. Starting with IGPX Immortal Grand Prix at Production IG, he served as art director on Valkyria Chronicles for A-1 Pictures Productions. He worked on the masterpiece series Danball Wars, Persona 4 the Golden, Yamato 2199,Ark of the Stars, Triage X, Joker Game, and many others.

ART DESIGN
Sketches by Makoto Kobayashi. Based on this, an art setting will be ordered by Mr. Tanioka.

ART SETTING
An art setting is done. At this point, Director Habara and Mr. Tanioka confirm it.

ART BOARD
If Director Habara gives the art board his OK, it will be used as reference for background work.