Yamato games of the Production Years

As Japan’s proliferation of pachinko parlors plainly demonstrates, the Japanese obsession with gaming is second to none. Imagine one replacing every Starbuck’s AND 7-11 in your city and you start to get the idea. But although children’s games were equally ubiquitous throughout the 20th century, anime-based games didn’t catch on quite as quickly as one might think.

Before the Yamato boom of the late 1970s, the closest thing most kids could get to an anime game was a set of Menko cards with TV or manga characters on them. Quick and easy to make (just ink on cardboard), they were run off by the millions, often with bootlegged or hand-copied images in lurid colors, all made possible by a lackadaisical attitude toward copyrights and licensing. A Menko game was similar to marbles, with two or more players throwing cards at other cards to try and win the most. The backs of Menko cards were usually printed with one-color images that facilitated other games from chess to gin rummy to rock-paper-scissors (or jan-ken-pon in Japanese). And that’s the way it stayed until anime proved itself as a mainstream medium with Yamato leading the way into a whole new world.

Here then is a gallery of Yamato games from the production years, which built the bridge from Menko to Machines…

The first steps were cautious ones, staying inside the comfortable realm of paper products during the release of Farewell to Yamato in 1978. There were Menko cards in both the classic rectangular style and more production-heavy diecut shapes shown below. (For one thing, the manufacturer had to separate them rather than doling them out in sheets that kids would have to cut apart themselves.) 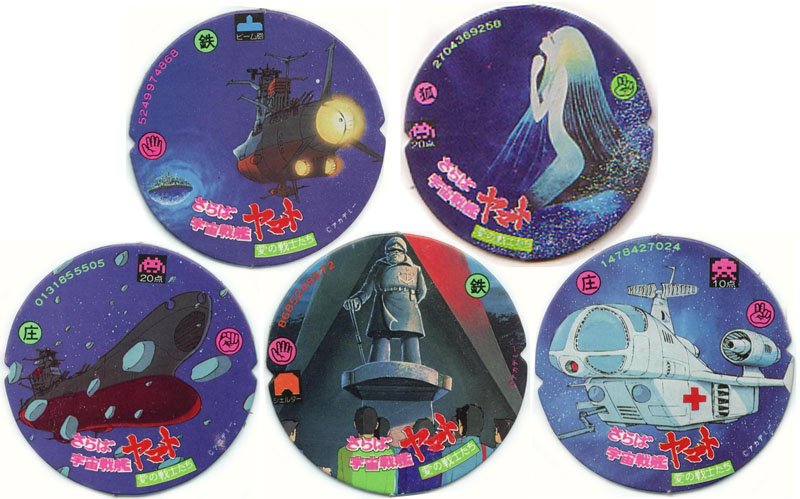 All the Menkos shown here were made by the Amada company, who also produced trading cards. The added graphics around the rim enabled a word game, jan-ken-pon, and apparently an analog version of Space Invaders. This was not by chance; Japan was so swept up by the famous video game in 1978 that it created a nationwide shortage of 100-yen coins. It should also be pointed out that Yamato was not alone in the world of Menko discs; Amada also had licenses for Leiji Matsumoto’s Captain Harlock and Galaxy Express 999. 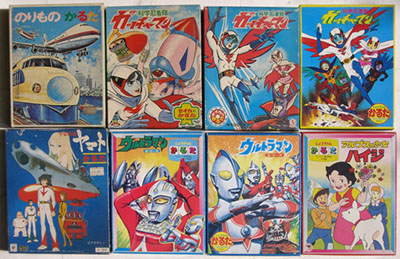 Nomura Toy Company, a major licensor for the Yamato 2 TV series, released this ‘Karuta’ [playing card] set which included images from both Space Battleship Yamato and Farewell. In Western terms, we would call them flash cards, since they were meant to teach the 45 characters in the Hiragana alphabet. The picture cards included a single character that was also highlighted on the sentence cards. Nomura released many more of these sets with various tie-ins to other children’s programs, as shown at right.

See everything else released by Nomura here.

Plain-jane playing cards were also made in two variations. Nomura made the Farewell set shown at left, and the Yamato 2 set shown at right was a bonus item in the February issue of Tokuma Shoten’s Terebi Land magazine. In this case, the faces were anime images; Hearts were hero characters, Spades were hero spacecraft, Clubs were enemy characters, and Diamonds were enemy spacecraft.

Another offering from the opening salvo was this pair of bootlegged board games by an unknown manufacturer. The images (swiped from Yamato, Captain Harlock, and other sources) had nothing to do with the gameplay, which was a simple matter of rolling dice and moving your fingertip from space to space. Weird as it may be, it nevertheless opened the door to Yamato games of another stripe.

Get a better look at these (and a rogue’s gallery of other bootleg products) here.

Japan’s Ezaki Glico confectionary company has been in business close to 100 years, and established an early partnership with anime when it sponsored the original Tetsujin 28 TV series in 1963. They hopped on the Yamato bandwagon in 1978 and pumped out collectibles in enormous numbers, including a line of “Space Games” on the boxes of their almond candies. This is just a small sampling of the games based on Be Forever and Yamato III, which involved aligning cards with each other to read a picture-story. 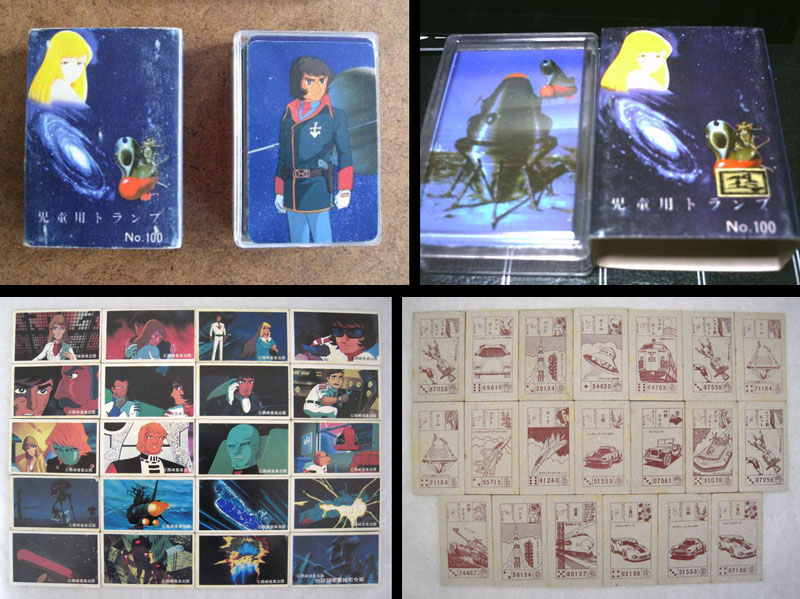 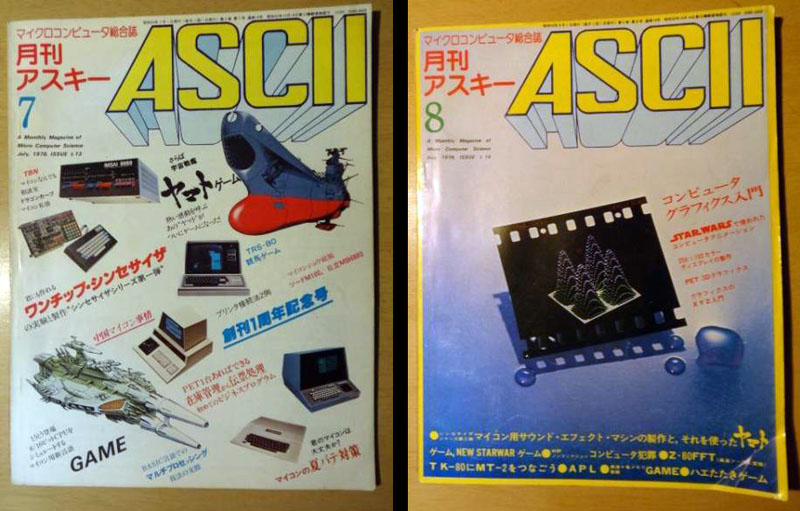 The first sign of the future arrived in an unusual form. The July and August 1978 issues of ASCII Magazine, a nascent publication for home electronics and computer hobbyists, published instructions for a very early (and no doubt very rudimentary) Yamato computer game just before Farewell to Yamato arrived in movie theaters.

See some of the interior pages here. 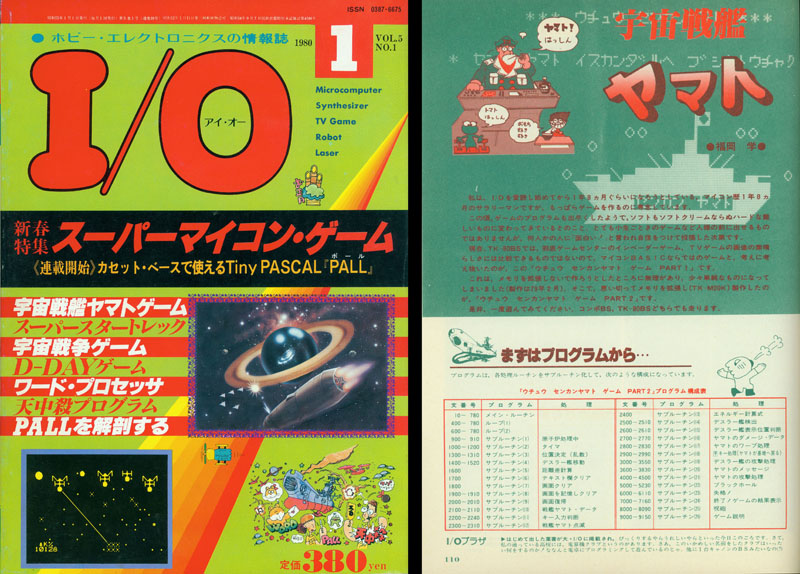 The next sign of things to come came about 18 months later when another computer hobby magazine titled I/O published code for its own Yamato game. The magazine dated back at least to 1977 and had strong SF/Fantasy leanings; other anime-based games were developed in its pages including one for Galaxy Express 999. Ironically, it would be another 12 years before an actual Yamato computer game was released, but there was no stopping the digital future.

Be Forever Yamato hit movie theatres like a tidal wave in 1980. The Popy toy company (a division of the all-powerful Bandai) responded with another set of playing cards and Amada rolled out some more Menkos. But with anime going into rapid expansion and capturing more eyeballs than ever, it was finally time to step up the game–and make some better games. 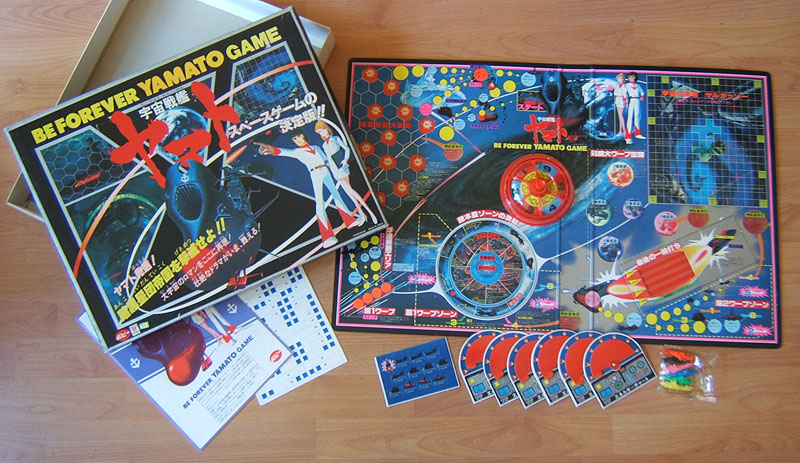 Released in December 1980, Popy’s Be Forever board game was one of the first (if not the first) to turn an anime production into an immersive, interactive gaming experience. Like the movie itself, the game was constructed on a grand scale, a 14.5″ x 18.5″ box holding an enormous 18″ x 28″ foldout board. In what must have been a grueling series of all-nighters, Popy’s game wizards created a complex, multi-phase chain of 10 mini-games that required careful management of energy resources against a ferocious series of obstacles. 2-6 players shared the goal of battling their way out of the solar system, knocking down the Dark Nebula Empire without getting sidetracked into the Sargasso Sea of space, then finding their way back to Earth.

Obviously, there was much more to it than that brief description indicates, so click here for a step-by-step photo tour.

Popy’s Wave-Motion Gun Set was a product from their tenure as the toy licensor for Yamato III in 1980. It was a shooting gallery game that came with a 15″ x 24″ galactic map on which you could place a variety of enemy ships ranging between 1 and 2 inches. The goal was to accurately target them and take them out with your wave-motion dart gun. The set came with a gum-rubber Yamato manufactured by the Marukoshi company (which Popy distributed) and the only Galman and Bolar ship toys that have ever been made by anyone.

See a photo-feature on this game here. 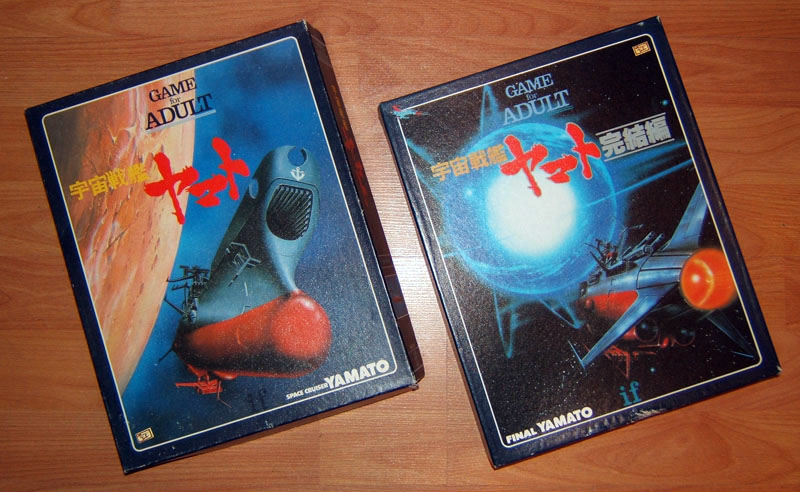 In December 1981, Yamato games finally reached out for adult players–and said so–with a wargame set from Bandai (shown at left), a sophisticated approach that took its cues from numerous war-strategy simulator games. (Both Bandai and its rival Takara produced a wave of anime-based simulator games like these throughout the early 80s.) Using dice, cardboard chips, battleground boards, and detailed rules of engagement, players could recreate their favorite space battles from the first series all the way up to Yamato III. Bandai followed up with a Final Yamato edition (above right) in February 1983.

Explore both games and read comments from the game designers here. 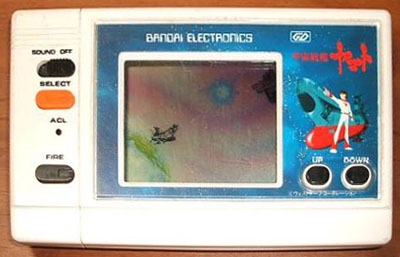 The last of the games from the production years was, coincidentally, the harbinger of everything yet to come: Bandai Electronics’ Final Yamato LCD game. The technology for this was first developed in the 1960s, then refined by Japanese electronics companies in the 70s for the first digital quartz wristwatches. From there it was an easy step to all sorts of applications, like highly-simplified hand-held video games.

In what was essentially a sideways version of Space Invaders, Yamato engaged in a shootout with City Satellite Uruk, scrolling up and down the tiny screen, building up energy for wave-motion blasts until only one was left standing. By all measures, this was Yamato‘s first computer/video game…but as we will see in the next part of the story, it was destined to be eclipsed many times over.

Continue to Part 2: Games of the Legacy Years