In 1981 and 1983 respectively, Bandai’s game division released two Yamato games unlike any that had come before. In fact, they were destined to remain unique until the Star Blazers Fleet Battle System came along, but that’s another story (told here). Between them, both games gave players the opportunity to recreate all the saga’s major space battles using cardboard chips, a space backdrop, a set of rules, and a pair of dice. They were part of the ‘If’ series, boxed in a format used by both Bandai and its rival Takara for a great many anime-based simulation games in the early 80s.

Produced as they were by these two industry giants, simulation games had very high production values and probably kept enough college students from their homework to bring down the national averages. 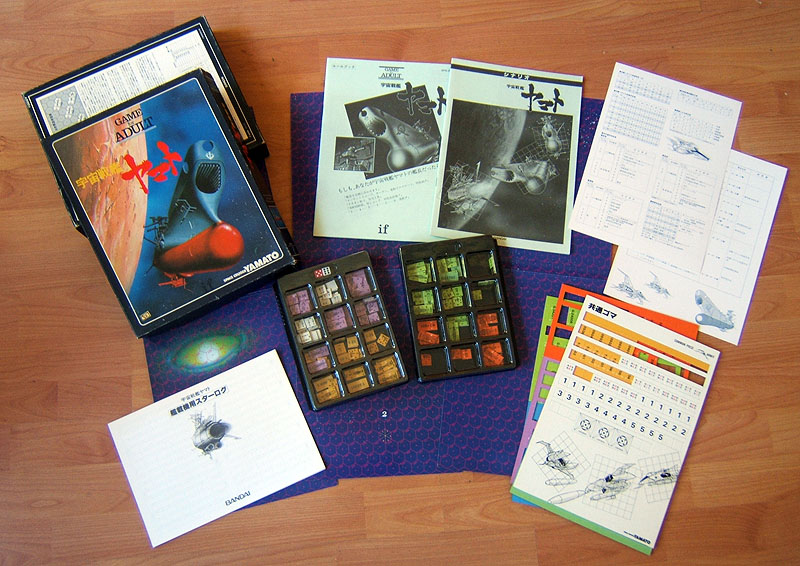 The more comprehensive of the two, the first game covered the entire saga up to and including Yamato III. The package came with three space maps, a rule book, a scenario book, several sheets of playing pieces, and reference charts.

The two books were generously loaded up with original artwork, which can be seen here. 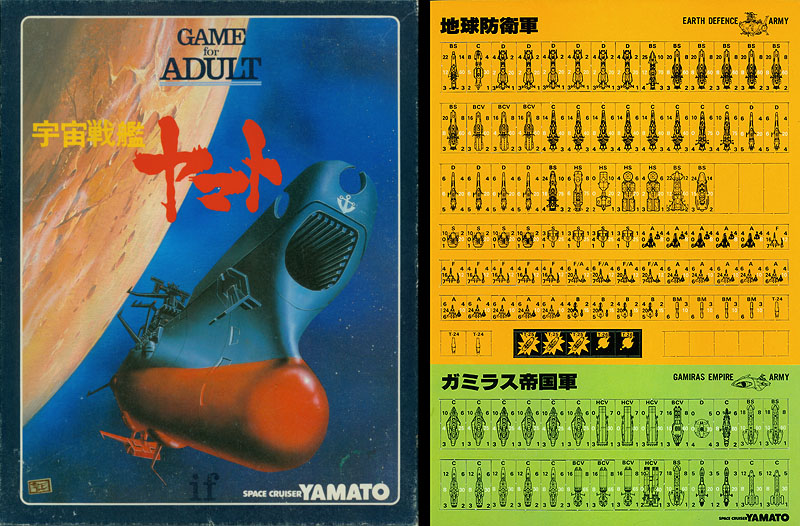 Comments from the game designers:

From the time I first saw Space Battleship Yamato on TV, I wondered if a space war game could ever be made, and we wish to express our gratitude that it became part of the “If” series. I gave it top priority while designing the game.

“I’ve watched Yamato, but I’ve never played a simulation game,” many people told me. I kept this in mind while writing the rules, and put in some repetition so they would be easy to understand. If you’re already familiar with simulation games, you may be able to breeze through it.

Because of the game’s design process, however, there was no way to include ground combat in the scenario. This is because the principal object of the game was to conduct fleet wars in space, and this was detached from the concept of landing on solid ground so that you could attack the Reflex Gun on Pluto, fight the tanks on Telezart, invade the Comet Empire City, Etc.

However, could the design process include the Dimensional Submarines? The Dessler space mines? These questions continued without end, and as we discussed them the rule book kept doubling in size. We put as much as we could into the scenario book and the rule book in order to recreate the atmosphere of the story on the screen.

As you look through the game, you will notice that neither Kodai nor any other human character appears in it. The game is only about mecha and war, and for that reason, Yamato itself should be treated as the hero. 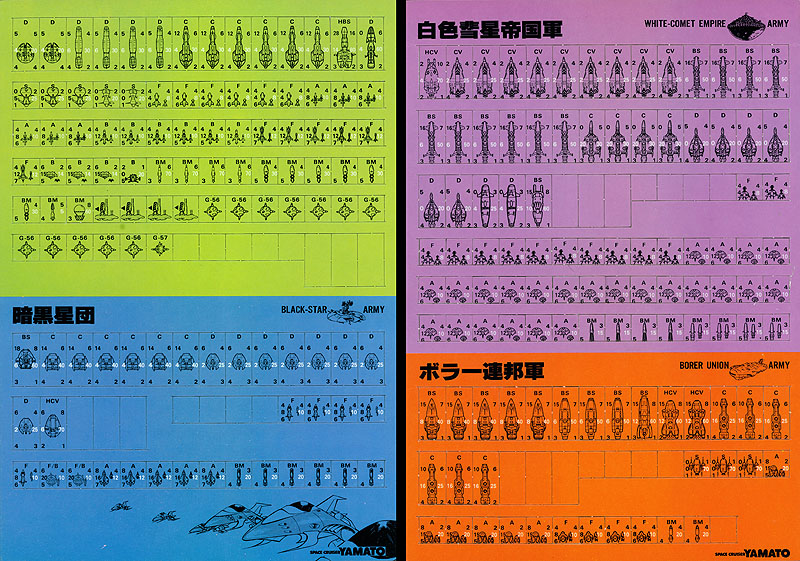 Designing a character game is difficult, but in the world of simulation games there is no such disadvantage. A character game has to have various contradictions built into it, and it becomes problematic when you have to include an element of fairness, which is absurd since fairness doesn’t exist in a realistic world. In film, TV, and stories, a main character is able to win a fight because of the decisions of a scriptwriter. If that character is thrown into the world of a game, the cold numbers on a list and the impartial roll of the dice take over, and the guarantee of victory vanishes.

A hero can be conquered by dice alone, and when you try to laugh it off it isn’t a game anymore.

A game designer racks his brains over all the different factors (balance, fun, fidelity to the TV or movie) to find the best points of contact. Yamato is no exception. We spent many days trying to faithfully reproduce the hopeless situations from the first series.

“The Gamilas side is unbeatable.”

It was inevitable that the game designers would have to take a firestorm of criticism. Therefore, special advantageous rules had to be attached to Yamato, as dictated by the scenario. (But there are still situations in which Yamato will be defeated!) Therefore, I think it was best to set the balance of military power in reference to happy memories of what we saw on TV. Is that the best way to play?

(What a pathetic explanation) 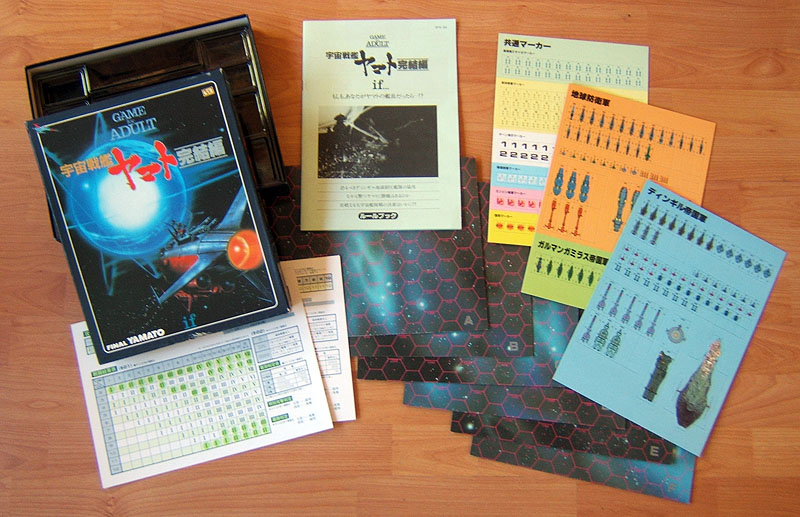 The second game wasn’t quite as extensive as the first, having only to concern itself with a single film. Despite this, the production values took a step up with full-color game pieces and a new set of playing boards. The single rulebook had no new illustrations, but the game designers certainly had new comments… 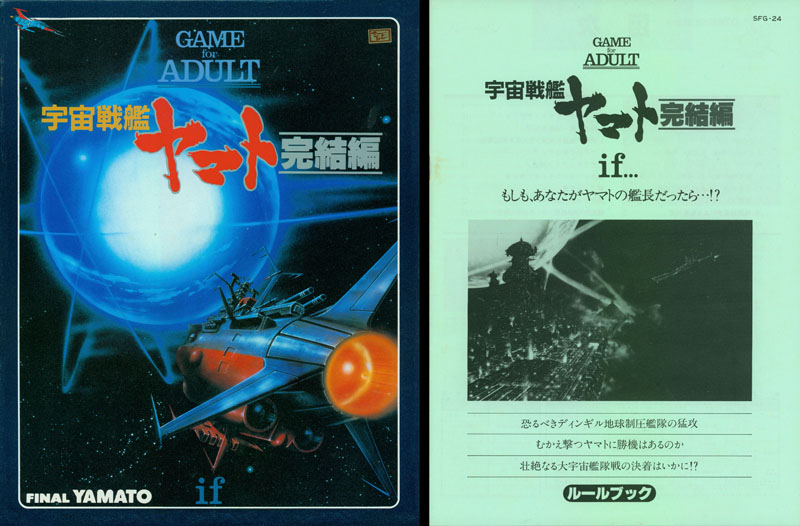 The sequel to Yamato finally came out.

I was fairly comfortable in designing this game, since we were able to use the framework of the predecessor. However, it is my personal taste to deal with big-scale scenarios, so some nuance may be overlooked. (Sorry.)

But I think the particular characteristics of the individual warships are reflected to some extent, and make the game more enjoyable. I’m satisfied with that.

All the Yamato fans, including me, enjoyed a big space war movie and can now enjoy the game. When I play it, I chuckle to myself inside. Nyahahahaha. (It’s the dark kind.) 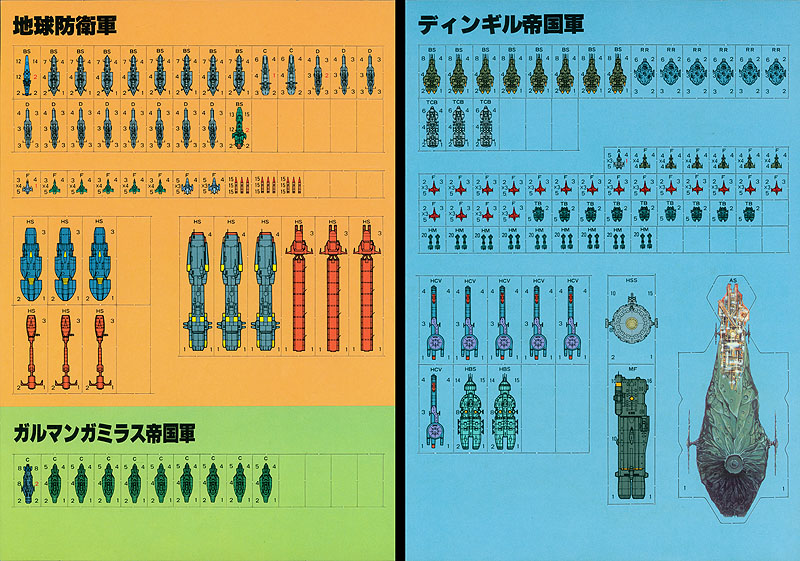 It was easy talking with Mr. Takeshita about making the Final Yamato game, and I approached it with joy and confidence. But they vanished immediately once I got started, and only uneasiness remained. This was because I had to write the proposal for the game before the movie opened.

However, because of the script, the storyboards, the mecha model sheets, and the boundless energy of Mr. Takeshita, I was able to regain my defiant attitude and pull through.

For those who aren’t familiar with simulation games and want to see their strategy reflected on the board right away, we avoided complex procedures as much as possible. It’s not possible to satisfy everyone, but we definitely want to satisfy Yamato fans.

Did Kodai and Captain Okita take the correct strategy?

This is a chance for you to show what you can do.

See two more games from the Bandai ‘If’ series here

Yamato fans never forget: this is part of a fan-made expansion pack released nearly 20 years after these games were published!