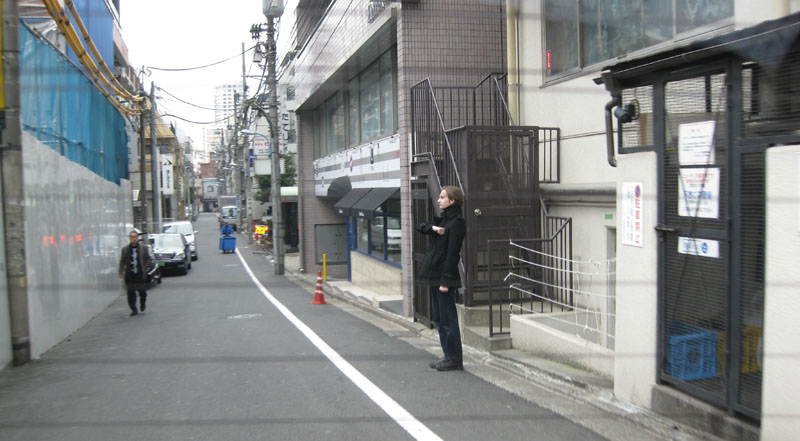 This was my last sight of Anton Kholodov, out the back of my cab window. The goofball struck a salute as I passed by and held it almost until I was out of sight. He didn’t break it even for that guy walking up the alley on the left, giving him a new “weirdo gaijin” story to tell his family that night. This farewell gesture was a bittersweet moment for me, since it marked the end of my stay in Japan on the afternoon of December 16. Anton was there for another week and a half, so he still had places to go and people to see. Very special people, indeed.

He takes it from here in his own words… 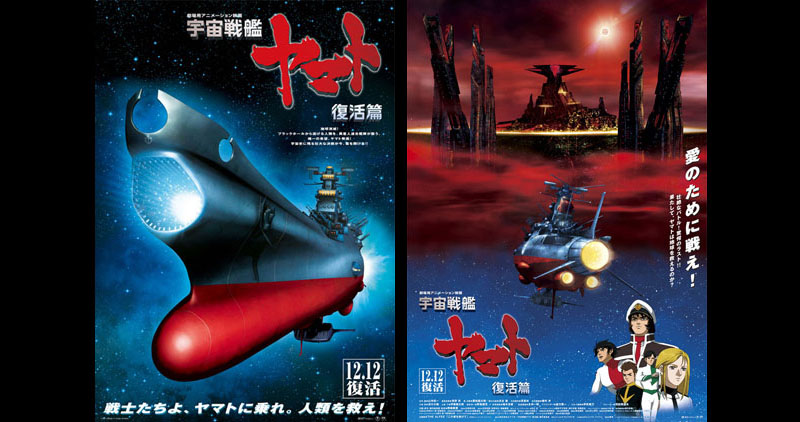 As soon as “Big Yamato Week” was over and there were no more events to see, I could finally think about the movie itself.

I saw Yamato Resurrection three times. At first I was 90% satisfied with it. (I heard other opinions starting from 50%.) The second time I raised that to 100% and realized it was even better than I could imagine.

Every fan has a list of things they want to see in this movie. This list can become your curse if you fixate on it. “I want to see this! If it isn’t there, this movie is no good! I will only be satisfied if I see this,” etc. Of course, I went to the premiere with my own list, so I spent the movie waiting for events and characters I wanted to see instead of enjoying it for what it was. I think many fans did the same. That’s why I missed many details that I saw the second time. And I really enjoyed them. 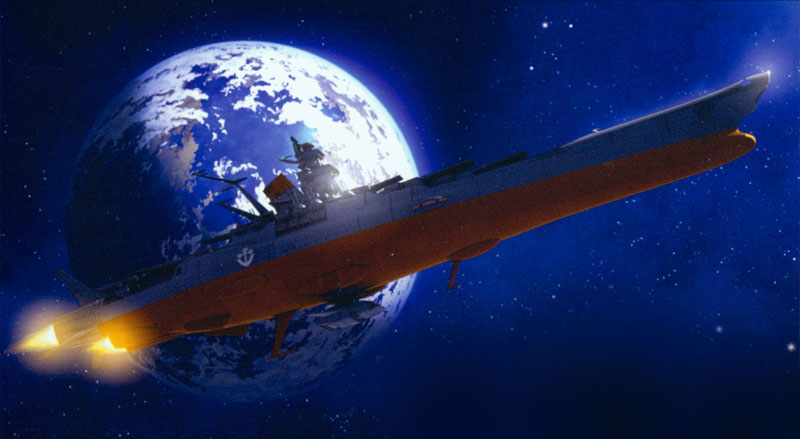 My advice to everyone who hasn’t seen it yet: please forget about your expectations. 25 years have passed. Now you will see The New Generation Movie. And you will surely like it if you realize that it’s impossible to make the ideal Yamato. It can exist only in your head. Everyone has their own ideal Yamato. That’s why I love it–it makes you think about it and dream. That’s great!

I should also add that an experienced fan can find many parallels with the old series in small details and some aspects of the story and especially in the music. And I can say they are really well made. I wouldn’t recommend that you start watching Yamato with this movie because you will miss at least a third of the fun. 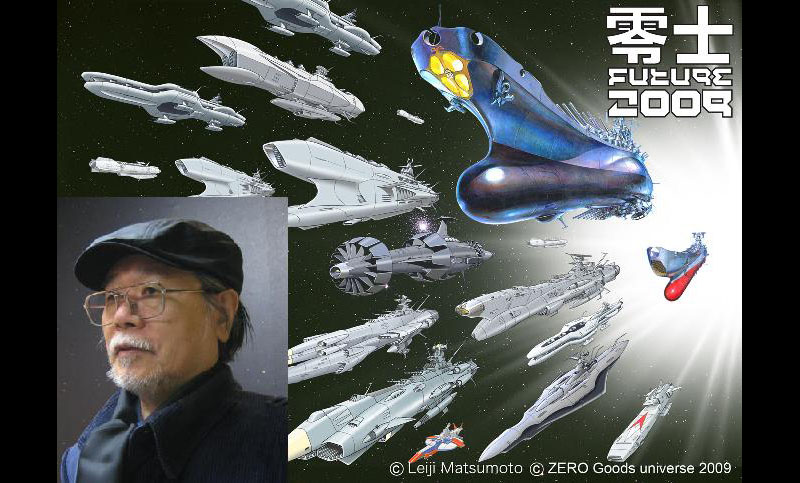 I had only one mission left before my retreat: Leiji Future 2009, an annual one-day mini-convention with a goods fair, drawing session and talk show with Master Leiji Matsumoto himself! I couldn’t miss it!

On Sunday, December 20 I started my journey to Odaiba Island in Tokyo Bay. I had to make a three-hour trip on my bike but it didn’t relax me as usual. I was worried about one thing: tickets to the event were limited, so I could easily miss it because I didn’t have one yet.

And that’s how it was. In Odaiba’s Palette Town shopping center, at the door of a small cafe named Culture Culture, I saw the sign: all tickets sold out. My mood turned 180 degrees, but I wasn’t ready to give up. Then a miracle occurred–a guy asked me if I had a ticket. When I told him my sad story he felt my desire and sold me one! (he had many of them, it was strange.) My savior disappeared into the crowd and I could now enter.

The doors opened at 1:30. The goods fair was already filled with products from the “Leijiverse,” both old and new. Many sellers were there including Zero Goods Universe (Matsumoto’s own company and the sponsor of the event). I bought a 1980 Galaxy Express 999 calendar and an old Yamato crew passport with an admission stamp from Captain Okita.

Mr. Katsumi Itabashi, a mecha designer for Galaxy Express and Yamato III, was selling his art books, so I got his autograph for my friend Tim (I found out about this event thanks to him) and shortly after that the announcer said: “Master Matsumoto appears on the stage!”

He took the stage in a bright mood accompanied by applause at 2:00 and gave us a greeting. He was ready for the main event, a two-hour drawing session. Every fifth ticket allowed its lucky owner to ask Matsumoto for a drawing of any character from the Leijiverse and also to receive an autograph. Cameras behind Matsumoto-Sensei showed the process of his work to everyone, and it was really interesting.

He used a marker and didn’t make any mistakes. Usually he was asked to draw Yuki from Yamato, Maetel from Galaxy Express, Emeraldas or Captain Harlock. But some fans had more original ideas: Captain Okita, Tochiro Oyama or Tetsuro Hoshino with the 999’s Conductor. Somebody even asked for the main character from Adventure of a Honeybee, Matsumoto’s very first manga from 1954.

My ticket was #41. The lucky tickets around me were #40 and #45. But I wasn’t ready to give up. I make the long trip here, spend so much money, and I’m going to just stand by and watch him draw for everyone else? It was time for action. As the last fan turned to leave the stage and the lady announcer was ready to say, “Thank you, the session is over,” I rushed to the stage, ignoring her completely.

“Master Matsumoto, it is such a big honor for me to see you! I made a long trip from Russia for this event! Please do me a favor!”

He was surprised but gladly agreed to draw one more picture for me.

He was puzzled for a second, then asked, “Are you sure you want me to draw Mamoru? The elder brother?”

He made the sketch in a few seconds and even autographed two pictures I’d prepared in advance (others had done this, also). We got a photograph together and I left the stage with my legs shaking.

After the drawing session came a two-hour break. I talked with other fans (some of them remembered me from Yamato Party 2009) and was even interviewed by a gentleman from a watch company (they presented a wristwatch designed in the Matsumoto style to commemorate his 55th year as a professional artist).

During the break fans could watch parts of the Galaxy Express 999 movie on the big screen and a small presentation for a new project, Out of Galaxy Koshika, which is supposed to be some kind of interactive manga for the Wii.

After the break Matsumoto returned to the stage at 6:00, which was now transformed for a talk show. The guest lineup was a virtual sea of stars:

A. Hideaki Ito, one of the original Yamato superfans who helped run the first fan club, edited the famous Yamato issue of OUT Magazine, and went on to consult for Bandai on special projects. He operated a slideshow and served as the moderator. (Read a 1983 interview with him here.)

B. Yoko Asagami, the famous voice actress for Yuki Mori from Yamato and Glass Claire from Galaxy Express, among others.

C. Katsumi Itabashi, mecha designer for Galaxy Express, Yamato III, Galaxy Railways, and many others. He is a longtime studio partner of Leiji Matsumoto.

F. The veteran animation director Nobuteru Yuuki joined the group as a “secret” special guest. His many credits include Captain Harlock Endless Odyssey and Macross Frontier.

The discussion mainly concentrated on the production and making of Galaxy Express 999 (now celebrating its 30th anniversary) but Matsumoto also presented various facts about his bio (like his trip to the Amazon) and early works. Many slides were shown; title pages of manga magazines, advertising, and sketches. The origins of Yamato were discussed, including the fact that Matsumoto first used that name for a spaceship in his 1961 manga, Lightning Ozma. Unfortunately there was no Q&A, but it was quite interesting nevertheless.

After the talk show ended at 8:30, I stayed for a short time, enjoying cocktails and watching sketches of GE999 characters that were still being shown. I didn’t even know about this event when I arrived in Tokyo, and now I have met and talked to Master Matsumoto himself. (I learned that he is a fan of classic Russian music but refrained from a visit because of the “legendary” cold!) It was very lucky, indeed.

So now, sitting in my kitchen drinking warm tea on a snowy evening (down to -40) I have many bright memories that warm my heart. I wasn’t sure before my trip to Japan, but now I can say it: Yamato is alive as never before. And it will live as long as we keep the dream! So get ready for lift off! Our journey to the sea of stars is only beginning!

Bonus: special products from the event

A Matsumoto redesign of the 1954 Gojira [Godzilla] and Maetel’s signet ring, both from Zero Goods Universe

A new Maetel, #35 from the Leiji Character Doll Series designed by his wife, and a Yamato tote bag, both from Zero Goods. Finally, a closer look at the new 55th anniversary wristwatch, which appears to have dropped in directly from the Leijiverse. 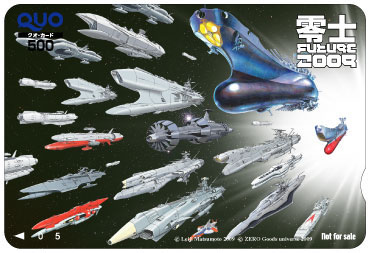 At right: a telephone card from the Quo company with poster art for the event by Katsumi Itabashi.