Carrying on with the product menagerie…

Children’s apparel didn’t appear until the first Yamato movie, but once it got going it kept going. Starting with this children’s happi, the next few items came from a single manufacturer that genericized the Yamato logo, but derived the art from Farewell. And who wouldn’t be happy with all those Comet Empire fighters buzzing around their body?

If you were one of those lucky kids who already had a Yamato bicycle, what could be better than a pair of Yamato shorts to wear while riding around on it?

Perhaps this keen pair of Yamato bellbottoms for the cooler months?

Or a set of girl’s pajamas that would keep Kodai and Yuki close to your heart all night long? Or maybe a pair of leather slippers by Japan’s Hatoya Company?

If you went for the slippers, it would be handy to have something to store them in, which would have made these vinyl shoe bags a necessity.

Or, for that matter, a vinyl day bag that looks just about right for schoolbooks. 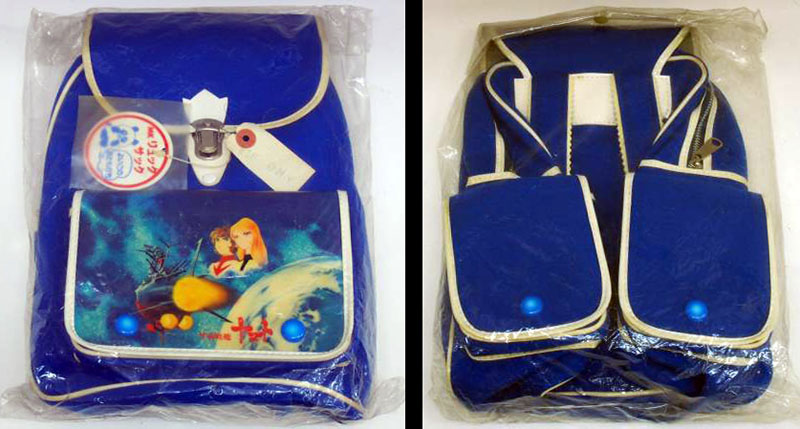 Of course, if you had the means to upgrade to this eye-catching ruck sack, you’d pretty much rule the playground.

The triple crew stripe made a return appearance on this deluxe pen and pencil case, which was big enough to hold a personal notebook and a pullout compartment for your secret stash.

There’s the triple stripe again on these transparent A5-size book covers. Each had a ribbon to function as a built-in bookmark. This was the reverse of a common trend in Japan, which was to conceal your reading behind a blank book cover. Once again, Yamato fans were a different breed!

Another way to promote your passion was to put stickers all over everything. The Nomura Toy Company made it easy with their line of both small and large varieties.

The Shueisha company, one of Yamato‘s publishing giants, made this more modest set of stickers to help promote their various books. Above left was a set tied in with their Roadshow series, above center was a promo for novelizations from their Monkey Library series, and the last one mentioned every imprint with a Yamato title.

True fans wouldn’t actually use their stickers, preferring to save them for posterity, so for them this pair of “gashopon” rubber stamps would have done the trick. “Gashapon” is both a name and a sound effect, the sound a vending machine makes when it delivers your capsulized trinket. 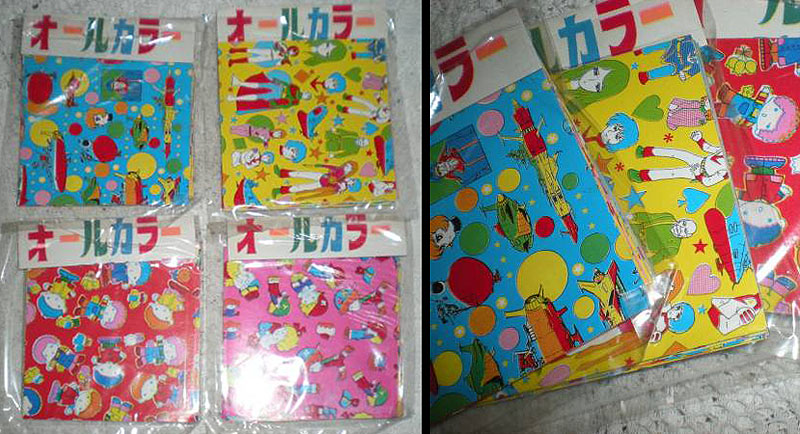 Giftwrap or origami paper? Maybe both. What makes it interesting is the unusual color choices and oddball combination of artwork from different sources. Some are based on animation drawings, others come from early manga by Akira Hio. Either way, the lack of licensor markings probably puts this into the bootleg category. (See many more bootlegs here.)

This one is definitely giftwrap, and even says so in English on the label. Owing to its very nature, a collectible like this has to be extremely rare today.

Is that a Yamato in your pocket, or…? Here were three different ways to wrap Yamato around whatever you needed to carry with you; coin purses (above left), pass cases (center) and memo pads (right).

Here were a couple other options: slightly thicker wallets with or without keychains. The “Mini Book Purse” would have provided the male fan a great opportunity to display his comfort level with his own masculinity.

Someone else carved out entirely new territory with this Farewell to Yamato hand fan, ideal for standing in a movie line during the sweltering month of August. The artwork was another combo from different sources. Side A (above left) was derived from the cover art for an Akira Hio manga paperback, while side B was a redux of the famous poster art by Yasuhiko Yoshikazu.

The Apollo Company had made two jigsaw puzzles for the Yamato movie, and they were still on board for the sequel. 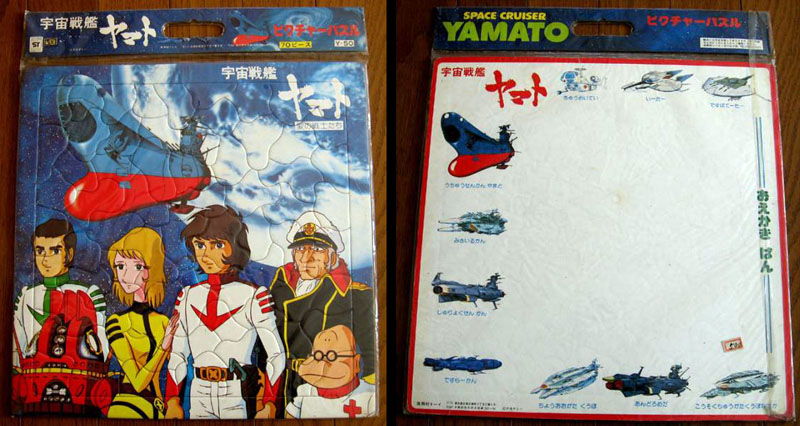 Apollo had some competition in this area from Nomura Toy Company, who sponsored Yamato 2. The children’s puzzles above and below just scratched the surface of everything Nomura had to offer. See their toy line here.

The two beach towels above would have been essential cargo for any Yamato fan bound for the beach in the summer of 1978, and either of the twin magnet sets would have been right at home on a metal cooler.

This inflatable Yamato pillow from Bridgestone (makers of the famed Yamato bicycle) wouldn’t look out of place at the beach, either. 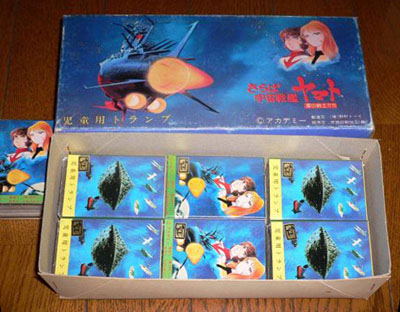 Ready to help you while away the hours in a long movie line was this choice of four different playing card sets from Nomura, called “Trump Cards” in the local vernacular.

Nomura also released this mini-collection of trinkets called a “Crew Set.” Some had previously been available in other forms and offered through the official Yamato fan club.

Even the packaging had a little bonus of its own, a fold-out card that doubled as the outer label.

Lastly we have these Kodai and Yuki masks for festivals and Halloween, authorized by both Academy Studio and Leiji Matsumoto. The “Yamato II” attribution is what makes them unusual. The “II” indicator applied to both the second movie and the Yamato 2 TV series. Either way, Yamato 2 is where we’re headed next.

Continue to the Yamato 2 collection, which includes more Farewell products

Note: The products shown in this article are presented for archival purposes only, and are not available from Voyager Entertainment. Some of the photos were originally uploaded to Yahoo.jp by private collectors. We thank them for their generosity!