As the Yamato saga matured, so did its audience. Fans who watched the first TV series as kids in 1974 were now preteens or teenagers, and the merchandising reflected this. Almost gone were products aimed at children-nearly every collectible generated for Be Forever in 1980 was meant for the older set and suited for some secondary purpose, like that pesky schoolwork.

This brought the quantity down a bit, but enhanced the quality since the standards of an older audience were a bit higher. Here is a look at some of what they had to choose from…

The Amada Printing company came out full force for Be Forever, which turned out to be their last Yamato campaign. Their Mini Card set was comparatively modest, 60 new cards and three new pocket books shown above in various front/back combinations.

The “Lucky Card” feature was continued; shown above at far right is one of the pre-marked samples. Once again, its purpose was probably to obtain a mail-order premium of some kind. 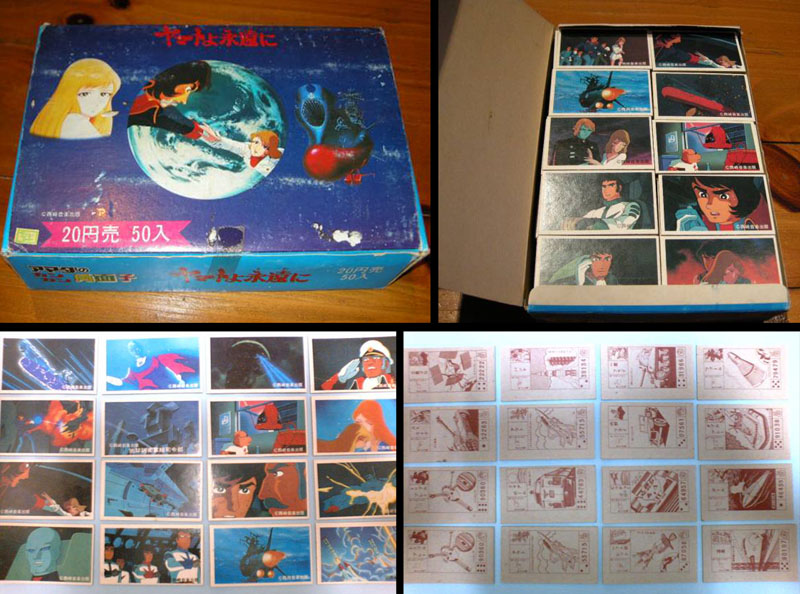 A fresh set of Menko cards also came from Amada, complete with unrelated graphics on the back of each card. This time they were a jumble of real-life ground, air, and space vehicles in addition to a wide variety of card and number-based games.

One of the new additions this time was a Be Forever “Seal Collection,” a series of stickers and a display book to keep them in.

There were a total of 100 stickers which filled 50 pages of the 64-page book; the balance of the pages was filled with animation art as seen above right.

Here’s another set with no attribution other than the Office Academy copyright; four cards and a wallet to carry them.

One more innovation was this set of “P.P. Cards.” The initials stood for “Pull Pack,” which just meant they came in packs like all the others. The red and white ‘P’ symbol was for Popy, the toy division of Bandai, who apparently co-produced the set with Amada.

Popy’s involvement probably resulted in the higher production values seen here, which included a line of picture wallets to store the set.

Popy and Amada also teamed up to make this pair of Yamato bicycle flags with spinning propellers. Either would have made a perfect addition to the famous Yamato bicycle. 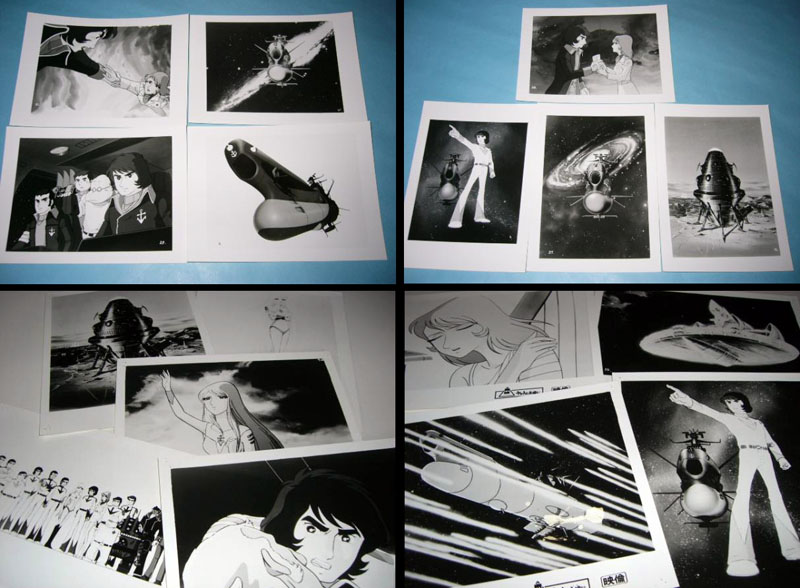 Once again, the Toei Movie Company was responsible for animation and film distribution on the film, which meant they also prepared another set of stills for distribution to the media. Animation magazines were all published in full color, so these probably went to newspapers. 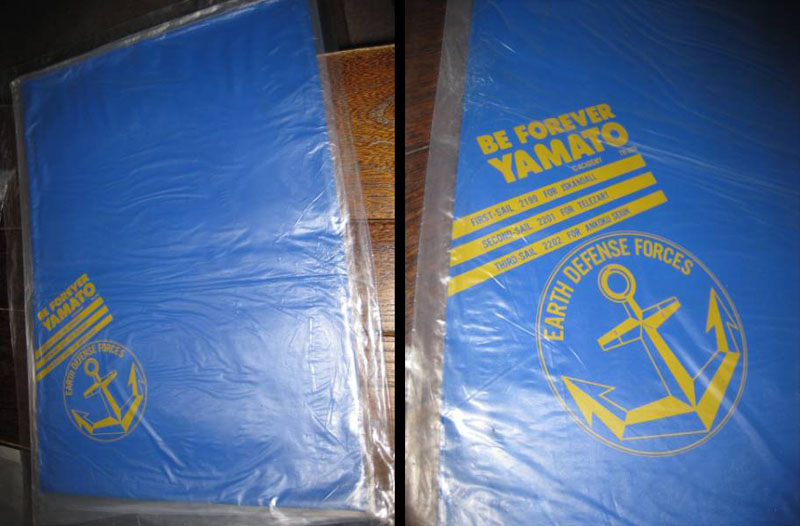 This new binder looked almost like something snatched off the desk of the EDF commander himself, a handsome and understated roundup of Yamato‘s achievements. It read: First Sail 2199 for Iskandall, Second Sail 2201 for Telezart, Third Sail 2202 for Dark Nebula.

The same EDF graphic appeared again on two other products shown here: a “Crew card” and a card sleeve. Here we see the Yuki version. A Kodai version was also made, and both were available through the official fan club. (See the Kodai version here.) The Yuki figure and notebook in these photos were part of the product avalanche for Farewell to Yamato.

The Pepsi Corporation rejoined the party with this trio of binders that were probably made before the film, since they only displayed images from earlier movies (and only one in the bunch actually tied into Be Forever).

The manufacturer of this rubber stamp is unknown, but the sticker sheet shown above right came from Screen, a monthly movie magazine from the Kindaieiga Co., who published a tabloid format Be Forever special, which can be seen here.

The name on these two handkerchiefs comes from another magazine, Margaret, which covered pop culture for girls. Never forget, girls made up over half of Yamato‘s audience, and are still strongly represented in Yamato fandom to this day. Below are two more from the same source. 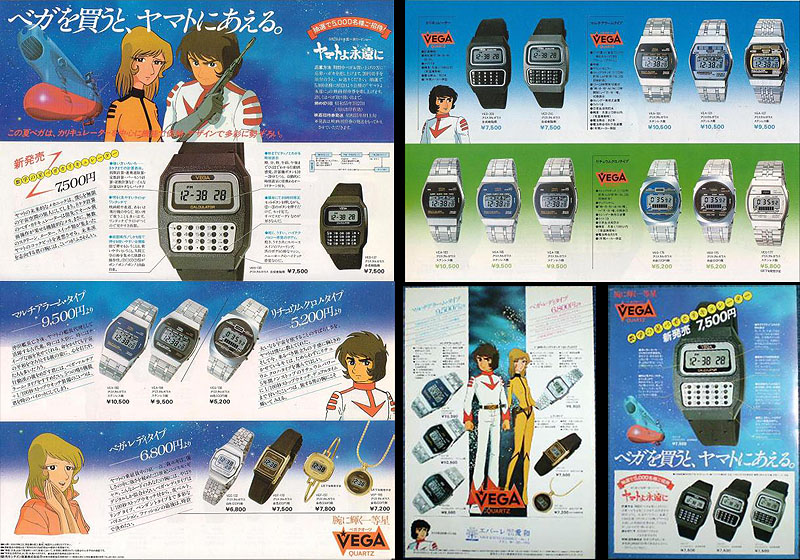 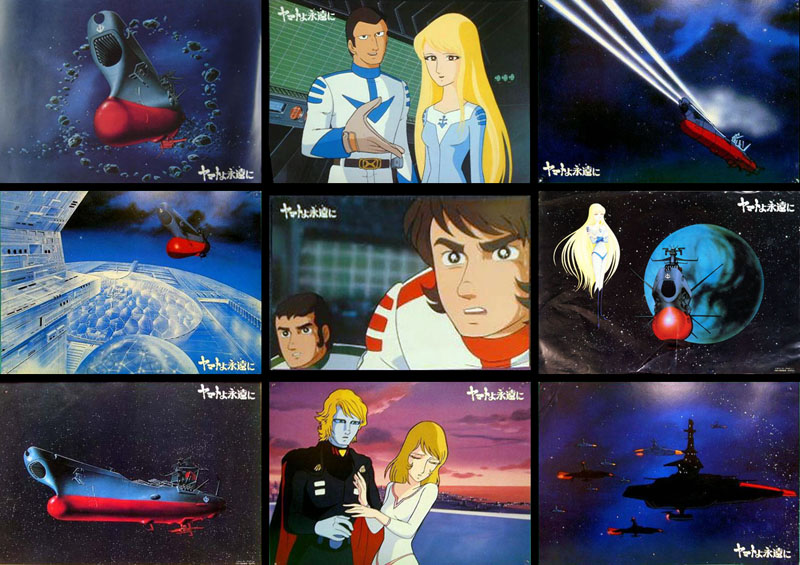 Posters were an even hotter commodity with Be Forever than they were with Farewell to Yamato, given the number of variants that could be had. These nine mini-posters were part of a set of 12…

…and additional posters could be found that reused artwork from theatrical one-sheets. See the actual one-sheets in our Be Forever gallery.

Even the Fuji Camera Company got in on the act, producing a two-sided “Fuji Color” calendar poster for 1981. The Sasha poster shown above right probably came from one of the many anime speciality magazines of the day.

It was only natural to want a Yamato bag to carry your movie loot home with you, and this pair of vinyl totes were just right for the job. Bags like these would have gotten a good workout during the summer and fall of 1980.