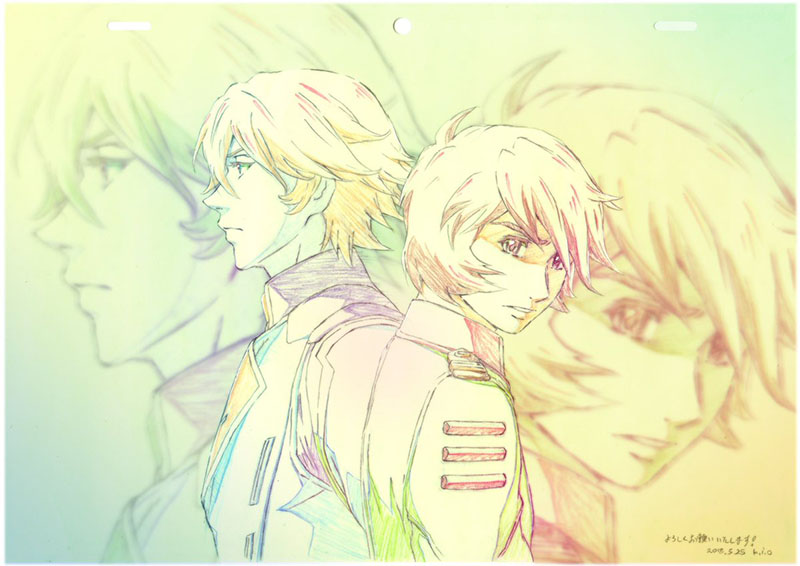 A few days after the preview screening, 2202 animation layout artist Kio “Edakio” Edamatsu shared his thoughts about it on Twitter as follows…

I went to a preview screening for the last chapter of Yamato 2202, which I helped with. There was some regret and I felt melancholy afterward. I finally realized that it was over. 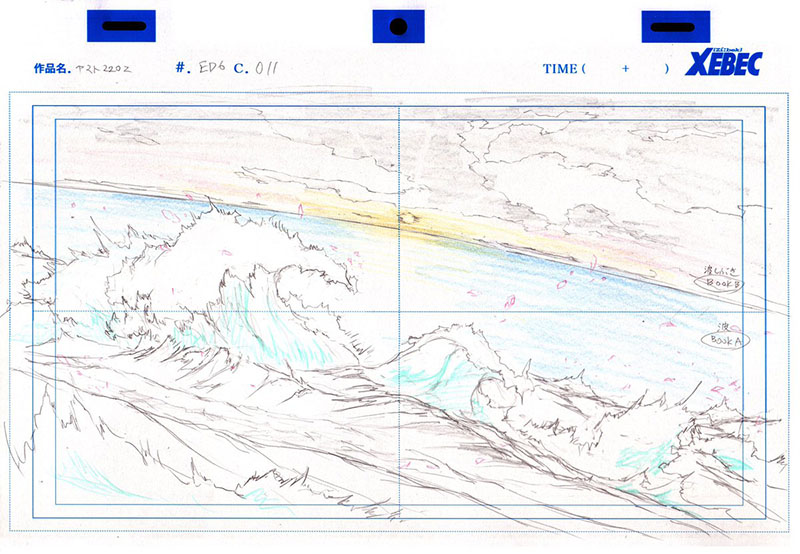 I should have spoken up at the right time. I thought it was better to draw something a different way. I can still vividly remember my debut work from 14 years ago. I have regrets about every title, but the challenge is to make the next work better. Even a few hours before the preview, I remembered things that made me gloomy.

But I saw the preview and will tweet my impressions. With a can of beer in my hand, I’m walking around town in the night air. My feelings have completely disappeared. Well. It’s over. Yes, now I can think that. There was some loneliness, but now it’s a refreshing feeling. 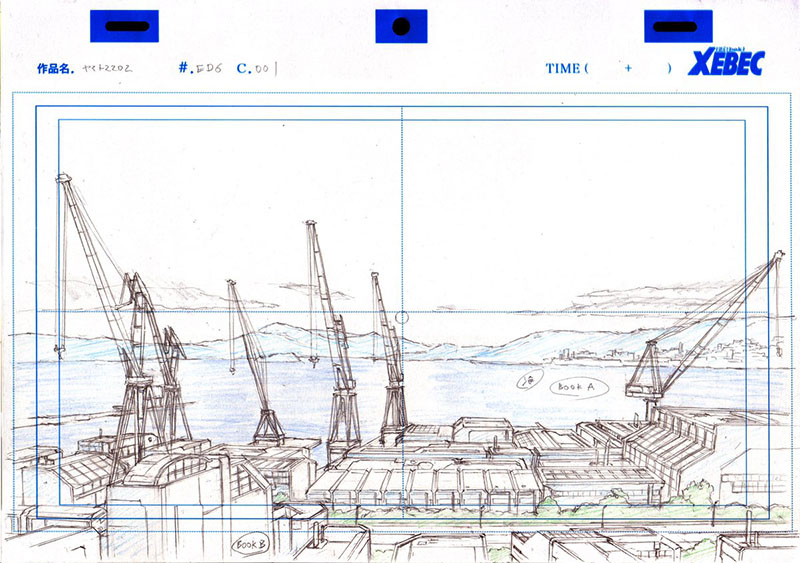 The last chapter on the big screen. I should have known from the state of the material I worked with how it would flow, what would be said, and how it would end. When I experienced it and it passed through my heart, I was quietly shaken by the part I hadn’t imagined. There were enough regrets to count on all the digits of both hands and both feet, but I can say that they are truly trivial.

Now I’m very happy and proud to have had the opportunity to contribute a few images to a picture with such power. Chapter 7, New Star Chapter, premieres in theaters on March 1. Thank you in advance.

See translations of both here. 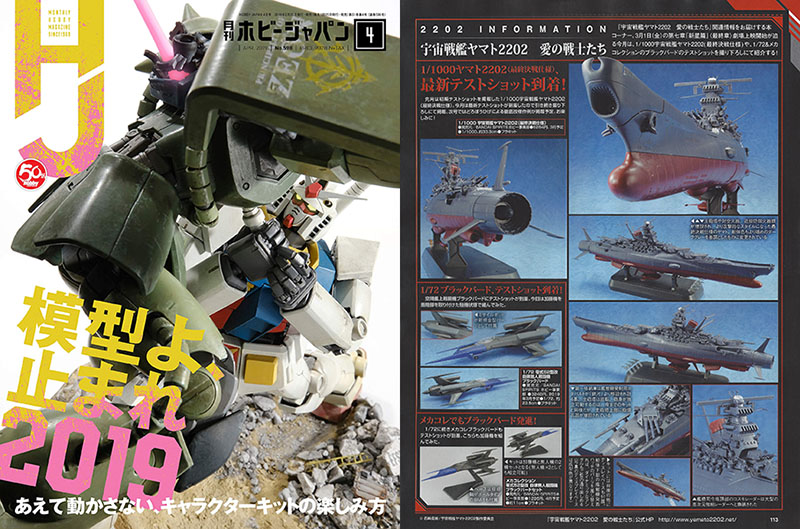 This issue gave us five pages on 2202, one devoted to upcoming kits and four with a photo-spread of a custom built Neu Balgray model. 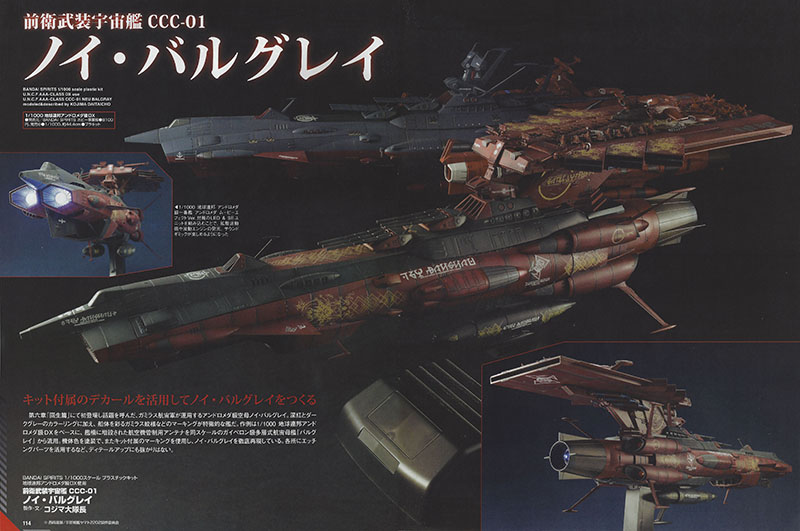 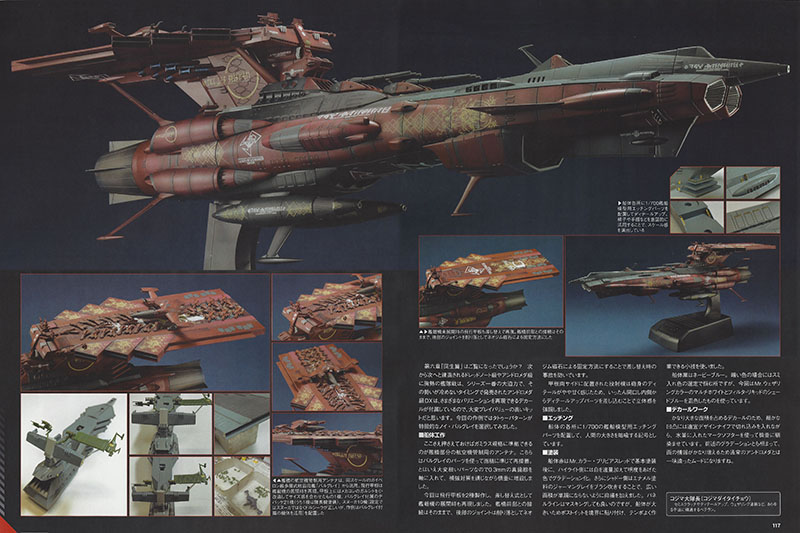 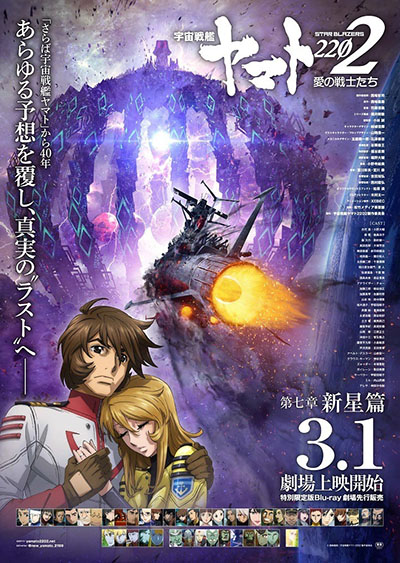 Daisuke Ono and Hiroshi Kamiya, the voices of Kodai and Keyman, shared their two yen on the completion of the series in a short interview published at Animate Times here.

The mighty UNCF Mecha Designer Junichiro Tamamori was tapped once more for a lengthy, detailed interview by Gigazine. Shorter interviews also appeared at Akiba Souken and Cho Animedia, but the Gigazine interview outclassed them all. Read it here. 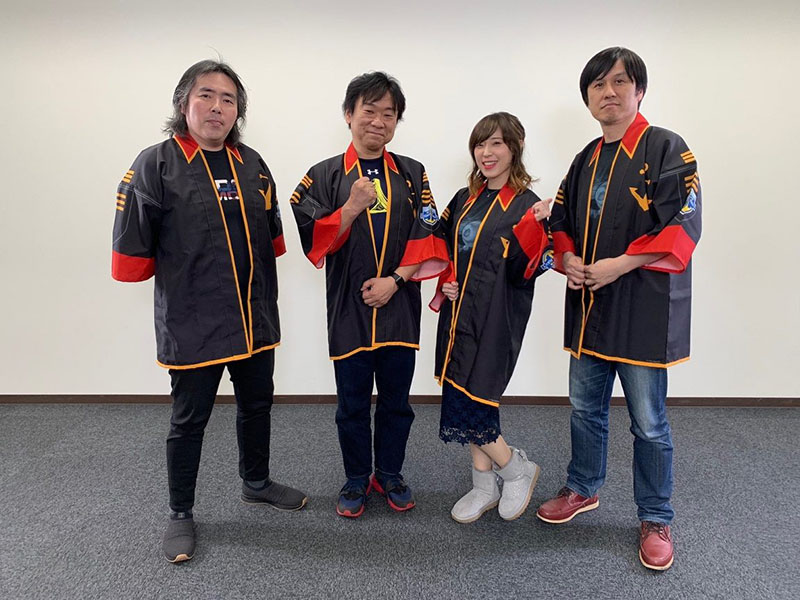 This Youtube talk show series, which has accompanied the release of each previous chapter, resumed today for Chapter 7. Our returning champions (L to R) Harutoshi Fukui (writer), Nobuyoshi Habara (director), Eriko Nakamura (voice of Kiryu Mikage) and Osamu Kobayashi (host) sat down to bring it home in the first of six episodes.

Episode 1, titled The series requires a review, was part 1 of a general look-back at 2202. The 20-minute video also included a conversation between Daisuke Ono (Kodai) and Koichi Yamadera (Dessler) and a montage of ads for related products. 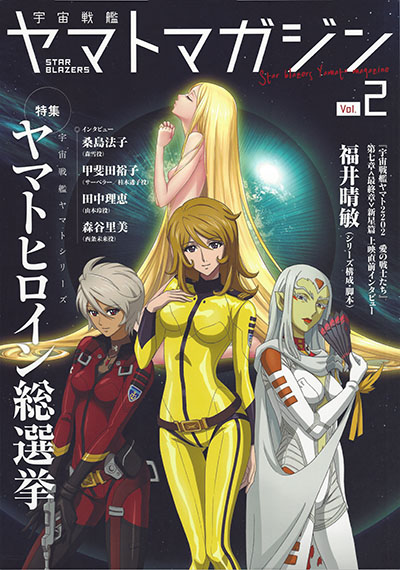 After the giant-size issue #0 and #1, the magazine seems to have settled into a more sustainable 60-page format, but production values are still as high as always. As the cover makes clear, issue 2 focuses entirely on “Yamato heroines” with multiple articles on female characters from across the saga.

Top ten character rankings (based on a point system) landed Yuki at the top, followed by Sabera and Yamamoto. Surprisingly, Sanada’s sister Mio (from Series 1) tied with the Queen of Aquarius at number 10. Four of the female voice actors were interviewed, and translations will appear here at a later date. The issue also contained the first of a two-part interview with Harutoshi Fukui, providing his last word on the series. Read the interview here.

Chapter 7 coverage gave us some new character art from the final episodes, and other features filled out another satisfying issue. 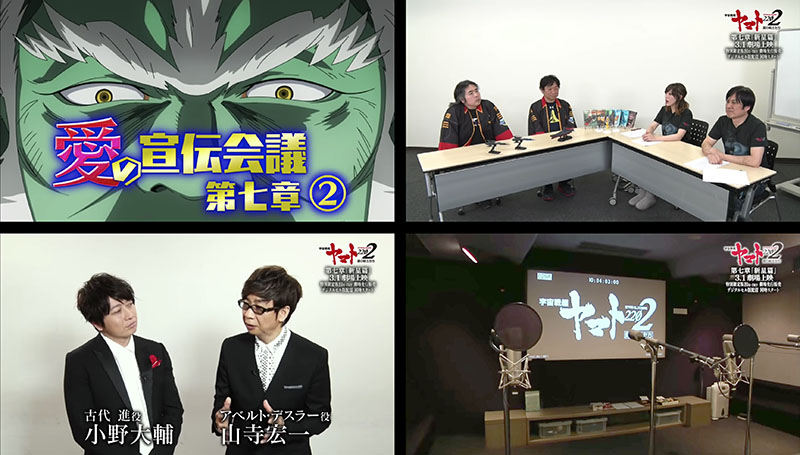 In part 2 of The series requires a review, discussion covered the events of Chapter 6, and the Ono/Yamadera conversation also continued. 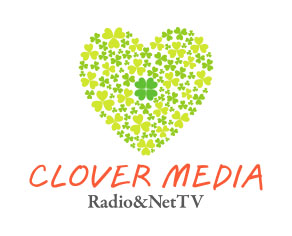 As covered here in the report for May 2018, the Kanto-based FM station Clover Radio broadcast a highly popular 4-hour show called Radio Suite Space Battleship Yamato, which examined the music of Series 1 with many tracks both rare and otherwise. On February 26 they announced a sequel called Radio Suite Farewell to Yamato. Scheduled for May 4, it will include returning guests such as 2199 manga artist Michio Murakawa and Yamato music researcher Fukuzaki.

More news as it happens.

Yet another Yuki figure was released today by Megahouse, more enticing and lurid than ever. Somewhere out there, someone STILL had a Yuki-sized hole in their collection that couldn’t be filled by the many, many other Yukis released prior to this one. And that someone was no doubt very happy to have her. This figure came with a postcard (above right) by Character Designer Nobuteru Yuuki.

Given that 2202 would soon end, it remained to be seen if Megahouse would continue making Yuki figures. For the sake of someone whose Yuki collection is still not big enough, let’s all hope they do. 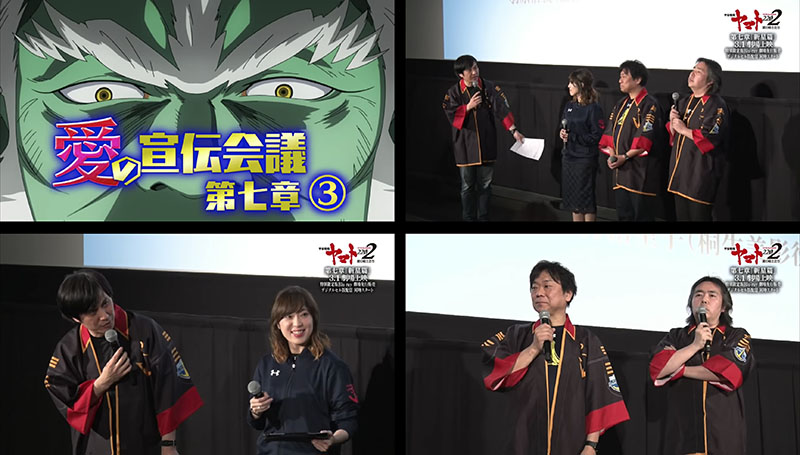 In this episode, titled We need a public recording, after all! the cameras followed Habara, Fukui, Nakamura, and Kobayashi in their stage greeting for the all-night marathon held February 8. 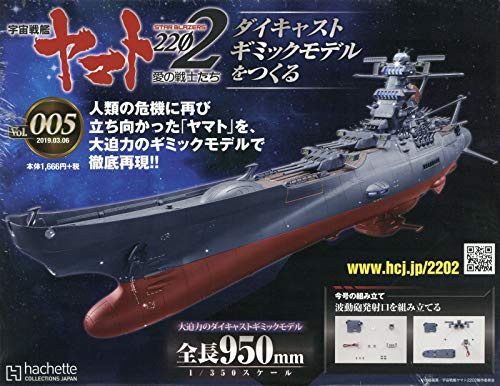 Set five was less flashy than its predecessors, which is only to be expected from time to time with a model that’s going to have a lot of internal mechanics. In this case, a single hull fragment was accompanied by internal electrical components that will enable future functionality. 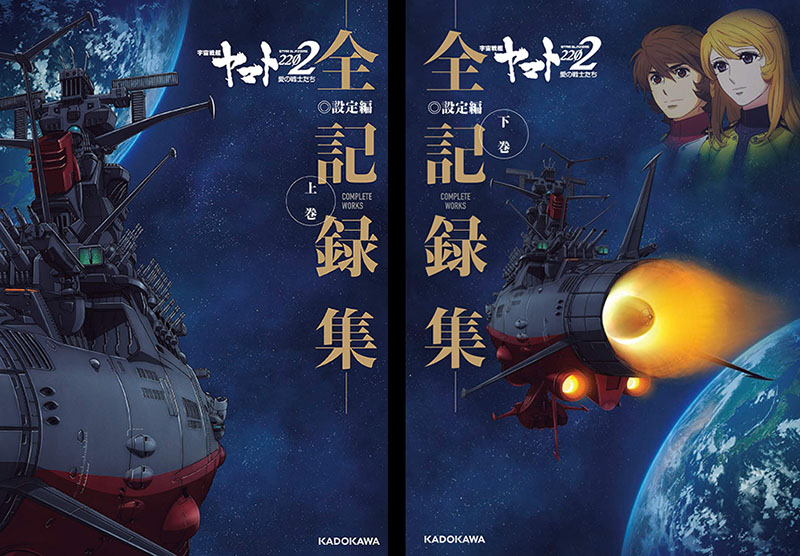 At last, book lovers: a real, honest-to-Zordar art book for Yamato 2202. And it’s a beauty, 160 pages that correspond to Yamato 2199’s “Earth” book, covering all of the mecha and characters from the Earth side of the story. 30 pages of color images are followed by over 100 in black & white filled with production art that flesh everything out. A 15-page story digest covers the first thirteen episodes.

Order it – without delay – from Amazon.co.jp or CD Japan.

Volume 2 (above right), due out March 29, is purported to cover everything else seen in the series and can also be ordered from Amazon.co.jp or CD Japan. 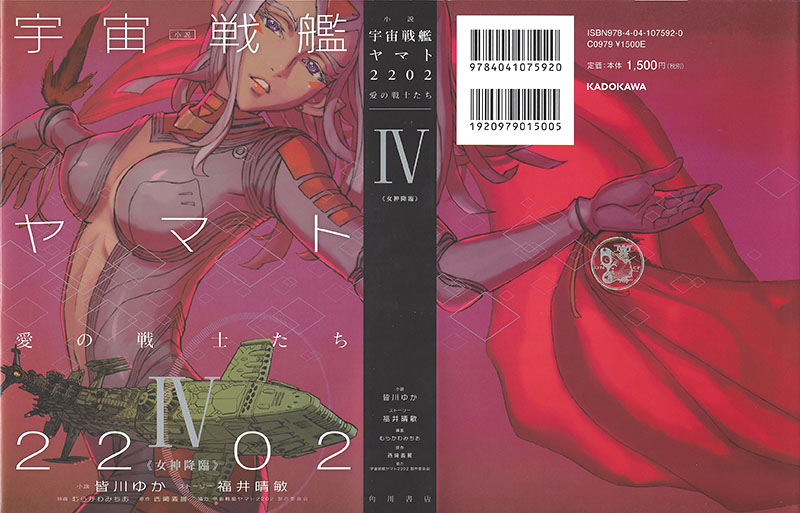 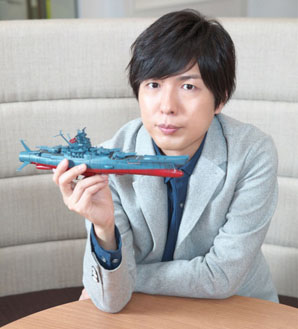 This volume takes us through the midpoint of the story and is set entirely on Planet Telezart. As before, cover and interior illustrations are by 2199 manga artist Michio Murakawa.

Order it from Amazon here or CD Japan here. 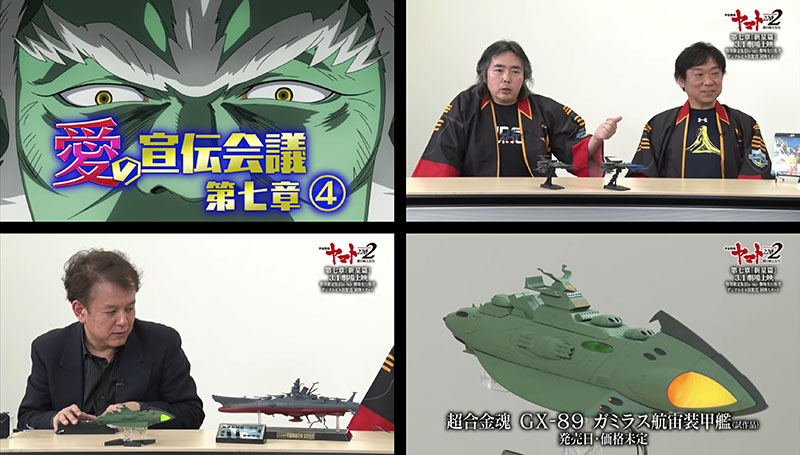 This episode, titled I want a preparation procedure before a screening was a setup for Chapter 7 in which the “final battle” version of Yamato was examined by the panel along with the history of Gatlantis. Following that was a live commentary on the opening footage of Episode 23. They were then joined by Satoshi Okazaki of Bandai Spirits, who gave a demo of the upcoming Soul of Chogokin ships, which are programmed to interact. 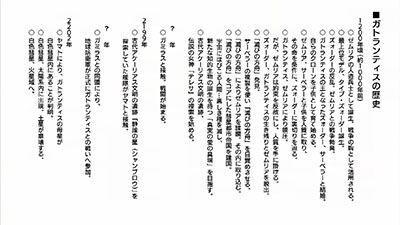 Circa 1200 (about 1,000 years ago)
• Born as artificial soldiers of Planet Zemuria, used as tools of war.
• Birth of highest-ranking model, Type Zordar.
• Zordar’s revolt, outbreak of war with Zemuria.
• Zordar becomes king of Gatlantis, marries Sabera. They begin to raise his own clone as a child.
• Zemuria abducts Sabera and the child to pressure Zordar on condition of their lives.
• Zemuria suppresses Gatlantis, but breaks its promise and kills the hostages.
• Zordar and the Gatlantis survivors escape Zemuria.
• The Ark of Destruction is discovered. Zordar remakes it using a clone of Sabera.
• Zemuria is overrun and captured within the Ark of Destruction.
• The Comet Empire city is founded within the core of the Ark of Destruction. As the “Embodiment of pure love,” its goal is to eliminate the demon seed of humans that infests space…and await the birth of a new intellectual organism.
• The search begins for ruins of the ancient Akerius civilization and the legendary goddess “Teresa.”

Year 2199
• A fleet searching for ancient Akerian ruins in the “tranquil planet Shambleau” comes into contact with Yamato. 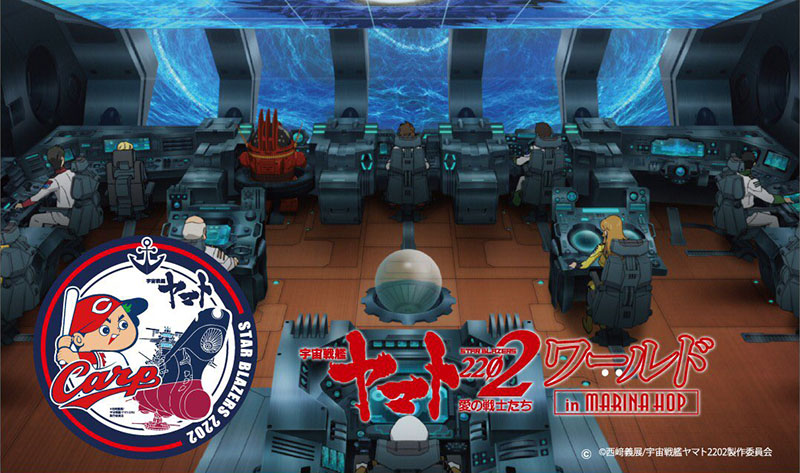 Yamato World is a live festival commencing on March 21 in Hiroshima. In preparation, the event’s Twitter page previewed several of the custom goods to be sold there, all tie-ins with the Carps baseball team. See them here. 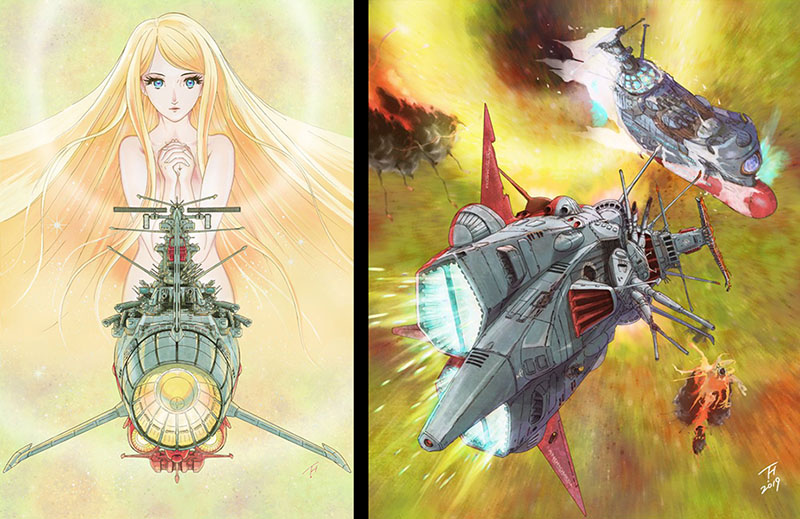 Fans posted another prizewinning batch of art on Twitter, filling up the last days before the finale. See a character gallery here and a mecha gallery here. 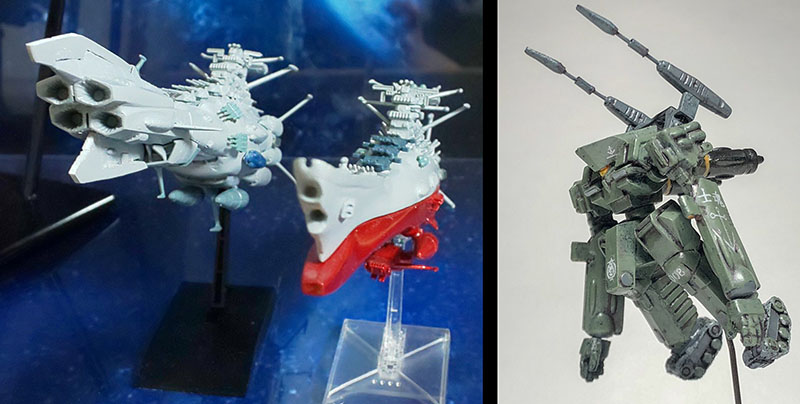 Modelers went hog wild, some catching up with Chapter 6 and others anticipating Chapter 7.

An exact release day is unknown, but sometime in February Premico released its Andromeda wristwatch as proven by these photos, found in the labyrinth of Yahoo Japan auctions. See the home page for this product here. 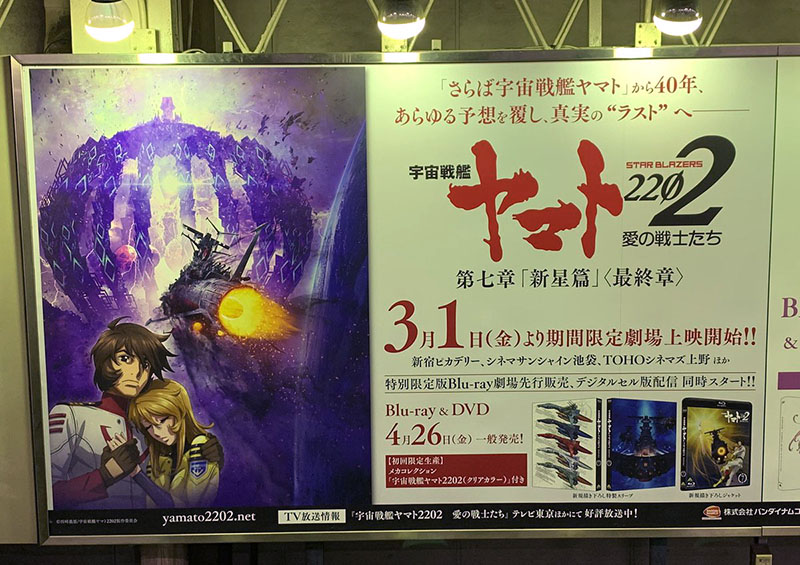 What’s next? Nothing less than the full-up premiere of the grand finale! Tune in next month for the grand…aw, who wants to wait that long? CLICK HERE to continue to Report 32: Chapter 7 premiere day!